Ann Louise and I scoured our to-go lists and decided nothing would do—the first brunch sets the benchmark for the year, and it had to be simply amazing.

Our curiosity was peaked by all the recent Instagrams from Quality Eats, a little spot that just opened in the West Village from the fine-dining family of Quality Meats, Quality Italian and Park Avenue Winter. 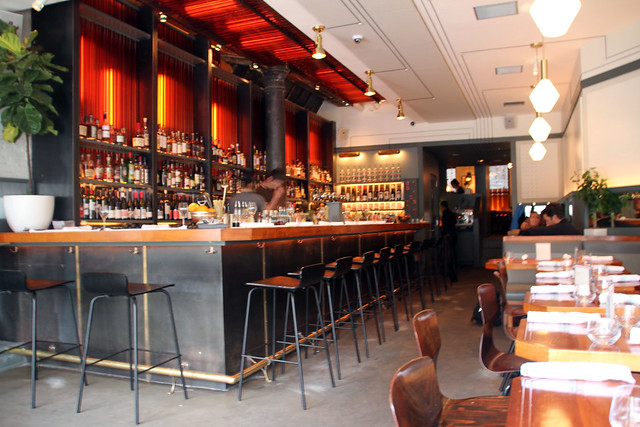 We knew it was on the hot list and would likely be packed, so we got there as soon as the restaurant opened its doors. Yes, 11 a.m. is obscenely early for a New York brunch, but our eagerness scored us the coveted corner window booth. We cozied up with full view of the restaurant.

The restaurant is, indeed, Instagram heaven. Its low-key decor is subtly charming, a bit mid-century-diner-like, but as if that diner is in a scene of a gorgeous Wes Anderson film. Even the menus are beautifully illustrated. 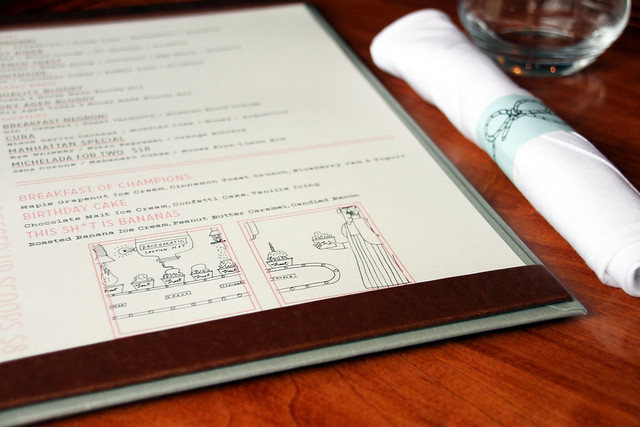 We ordered coffees and bloody marys. Quality Eats offers two Bloody marys: a regular one and a dry-aged Mary that our server said is infused with meat. How can you say no to that? It was indeed delicious and smokey, with cheese-stuffed tomatoes and olives. 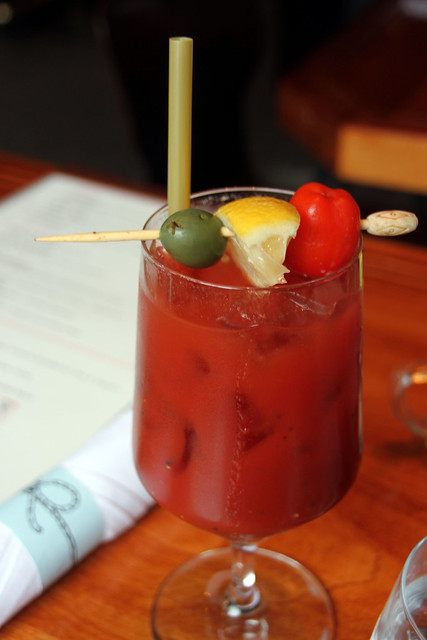 The brunch menu is equally as low-key and charming, with a clear focus on eggs. The menu is even organized by type of eggs: Do you want yours fried, scrambled, hard-boiled, or poached? And then, of course, there is the “Obligatory Egg White Option,” written as such, for your boring healthy Bitches.

We ordered the monkey bread to start. It was different from what we were expecting; rather than your traditional sweet and gooey pull-apart bread, we were served a savory version of the classic, served in a cast-iron skillet. 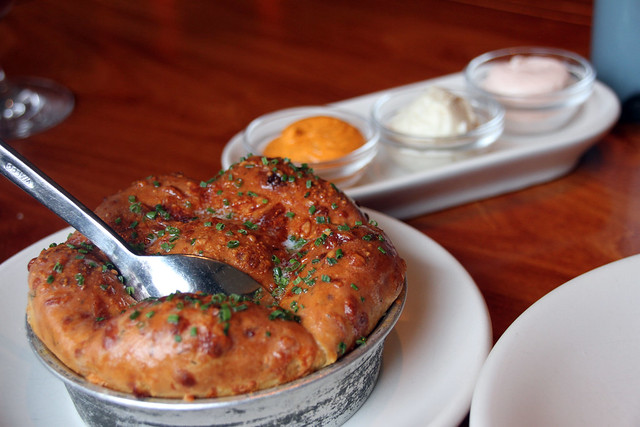 The perfectly baked bread, which was filled with various delicious herbs, was accompanied by three spreads: Bloody Mary butter, bacon butter and salmon butter. It was impossible for us to pick a favorite, but the Bloody Mary butter was definitely the most inventive of the three.

We also ordered the Grilled Nueske’s bacon to start. Served with a peanut butter spread and a chopped jalepeno jelly, it was on the bone, making it thick and juicy. This isn’t your typical plate of bacon strips; it’s the gourmet way to start your brunch. We felt like we were eating lamb chops. 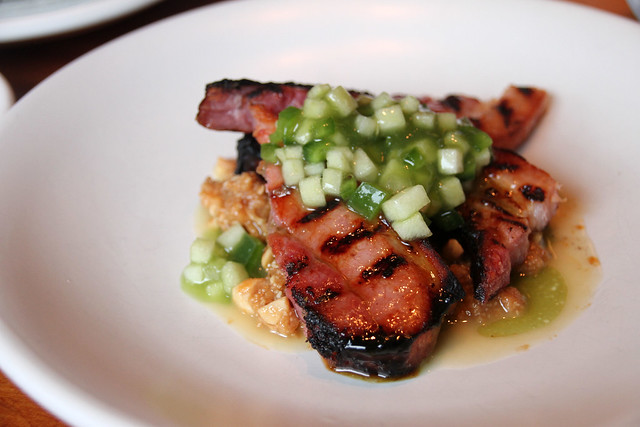 I had the fried egg with pepper toast. I expected the toast to be baked with peppers inside, but instead peppers were shaved and piled on top of the toast. The sausage was delicious and spicy, making the entire dish a delight of flavors. 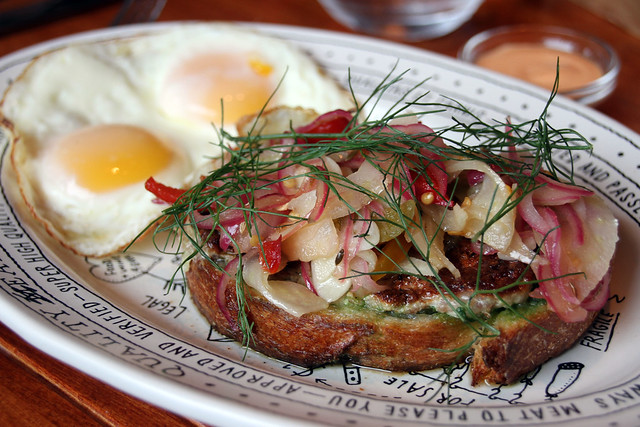 Ann Louise went with the nova and dill version of the a la minute quiche. Again, this wasn’t a traditional dish, as the eggs didn’t seem to be baked in the shell like a typical quiche. Instead, the eggs were perfectly scrambled with dill, placed inside a small pie shell, and topped with the smoked nova salmon.

It was delicious, and we appreciated the small arugula salad with roasted tomatoes that was served along side of it. 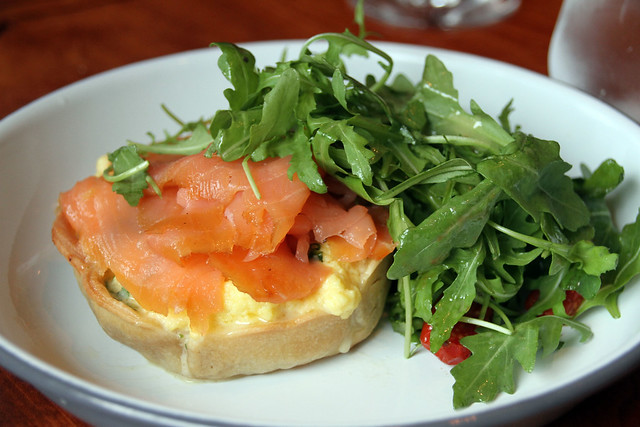 Finally, the spinach beignets were the first to be ordered but the last to try. The tiny puffy beignets were filled with warm spinach and hollandaise. They were gorgeous (and what an interesting idea for a brunch dish!), but we found them a bit dry.

We had an order of the curly fries on the side, which arrived in a brown paper bag, perfectly crispy and greasy. They were topped with herbs, and made for a nice side snack with our entrees. 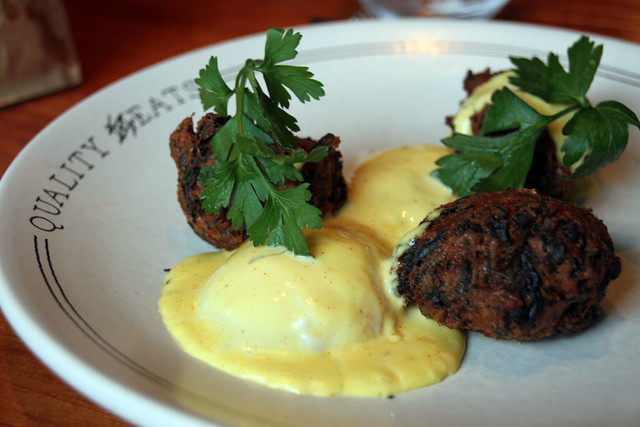 We had to get the desserts. We had heard all about the “dressed up” ice cream scoops that are served in old-fashioned ice cream cups. We also wanted to try “This Sh*t is Bananas” because, frankly, it sounds amazing. Alas, they were out.

Instead, we went with the Birthday Cake, and our lovely server felt so bad at our dessert pouting that she brought an extra dessert for us to share.

The Birthday Cake was really adorable, and equally as tasty. It arrived piled high in a cup with a birthday candle as its cherry on top. The cake was soft and sugary, bringing to mind the birthday cakes of our childhoods. The chocolate malt ice cream was smooth and rich. 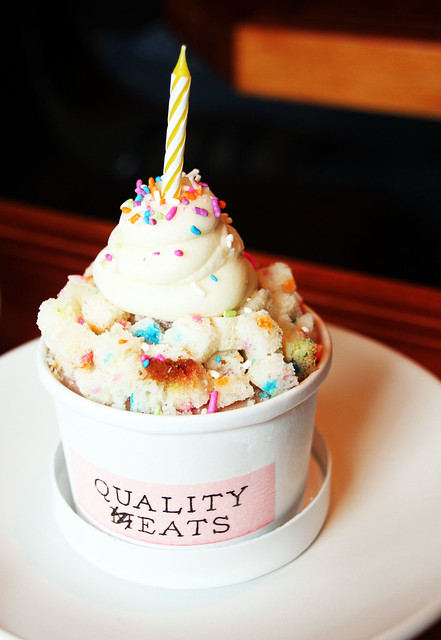 The other dessert was a delicious cinnamon-based ice cream topped with, what seemed to be, Cinnamon Toast Crunch cereal covered in berries. Ann Louise preferred this option; she loved the crunchiness and opposing textures.

We were stuffed and happy, but most of all enjoying the fabulous people-watching from our corner angle. The restaurant had been turning tables all morning, and while it was busy, it wasn’t overly packed. 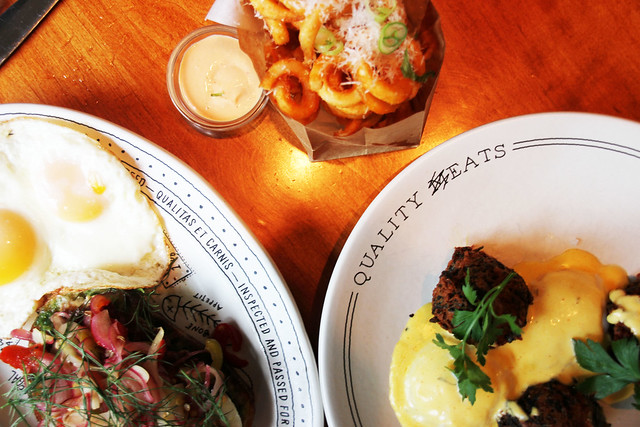 The Bitches say: A. We started 2016 by setting a really high brunch benchmark. Quality Eats is low key but perfection.