After two blissful weeks of living la dolce vita in Italy — otherwise known as heaven on earth — I was craving a good ole’ American meal. So, the day after we touched down on American soil, I headed to Smoked & Stacked, the newly opened fast casual BBQ spot, to catch up with my best friend and satiate my craving.

The sandwich shop was smaller than I expected, primarily made up of 10 small tables and a row of barstool window seating, where patient guests perch with baited breath for a table to open up. We got upstreamed on our first attempt, so we stepped up our game and successfully snagged a table for two, just as our sandwiches were ready. 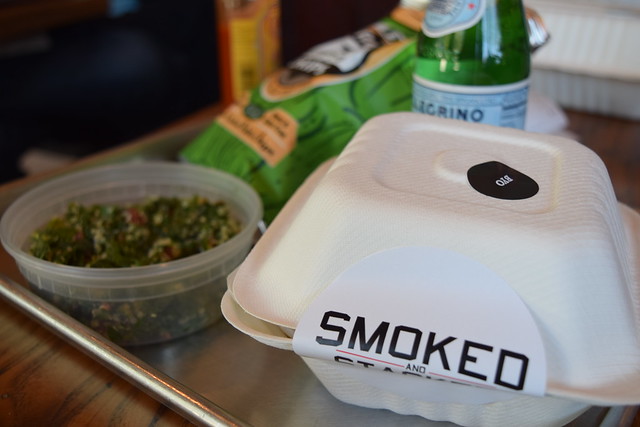 We were an hour late for the breakfast menu (served daily until 11 a.m.), so we perused the lunch menu, consisting of several BBQ sandwiches, a build-your-own sandwich option, and a variety of sides, including coleslaw and tabouli. 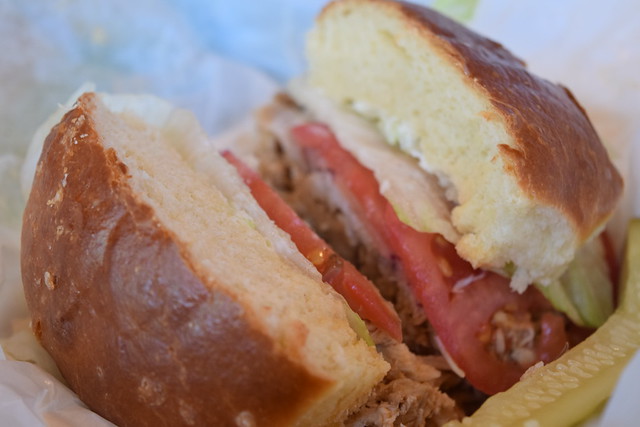 I opted for the Chicky Chick, a smoked chicken, lettuce, tomato, and onion sandwich, because I liked saying the name and I wasn’t in the mood for pastami, the meat of choice on the other two sandwiches. We noticed platters were available on certain days, including smoked half chicken and sliced brisket, but as a party of two, it seemed aggressive. The space itself was also not equipped to accommodate a large group suited for this type of order, so we filed this under a great catering option.

Lauren decided to build her own sandwich with smoked chicken, mustard, and coleslaw on rye. It was delicious but messy—that was true for both of our sandwiches. 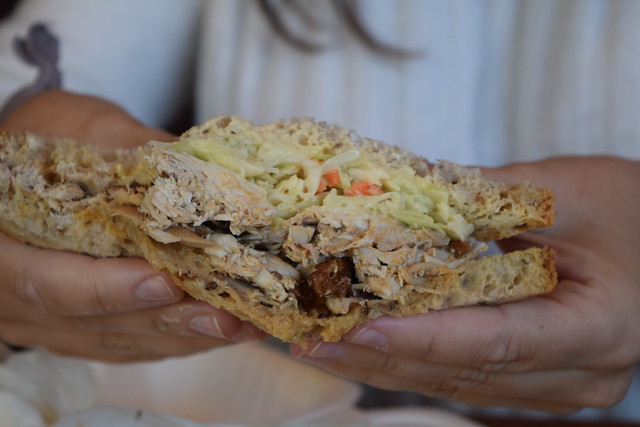 Even though we noted our meal was “for here,” both sandwiches came out in a white take out box, leaving us with a clunky spread on our tight table. Each sandwich was accompanied with a legit pickle slice. We’ve discussed this before, love it or leave it, you have to respect a sandwich shop that serves up a good pickle. 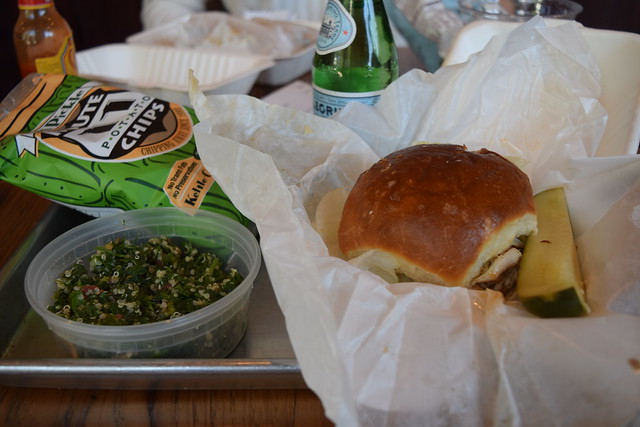 We were too busy catching up on life to worry about the mess we were making and lack of napkins at our disposal. Every BBQ place should have napkins at each table, am I right? Regardless, the chicken was tender, smoky, juicy, and just delicious. I would have added coleslaw to my sandwich, like Lauren did, to give it another layer of flavor. We ordered a side of tabouli to share, which was average. There were very little bulgur (the couscous-like substance in the Israeli dish) or tomatoes, and way too much parsley. They also carry Route 11, our favorite brand of chips, so we each indulged to round out our hearty lunch.

Smoked & Stacked is a small space, but a great spot to quickly satisfy a BBQ hankering or indulge in a hearty lunch. We’ll be back before 11 a.m., to see how the breakfast sandwiches stack up.

One thought on “Preview: Smoked & Stacked”