The hubby and I have lived in our current place three, going on four years, now. During the time we have been resided in the Ukrainian Village neighborhood, we have watched it evolve immensely, from new restaurants and businesses popping up left and right, to the extreme development of new housing in the area. Ukrainian Village is fast becoming one of the most popular neighborhoods in Chicago, let alone the country, after being named The Hottest Neighborhood in the U.S. by Redfin earlier this year.

In a four-block radius of our condo, there have been a number of new and exciting restaurant openings, which has made my loyalty to the ‘hood reach an all time high. What first attracted us to our condo, after it being awesome, of course, was the fact that there was a restaurant right downstairs— score! Unfortunately, in the three years that we have had our condo, we have seen three restaurants occupy the space. Is it bad luck, a bad location, or a poor concept, I have long wondered.

Most recently, the critically acclaimed Chicago hot-spot, Bar Marta, shut it’s doors, much to my dismay. Chris and I were huge fans of the food and ambiance of Bar Marta, not to mention the proximity to our place. In winter, it was especially convenient to walk downstairs in nothing but our pajamas and enjoy a fantastic meal. When Bar Marta closed, the whole neighborhood was surprised; it was always busy, and it was so popular in the Chicago restaurant scene. What went wrong?

Even more surprising for our chatty neighborhood, was what we discovered was going to occupy the space next… a caviar bar. While our neighborhood is definitely growing and becoming more gentrified with young professionals and foodies alike, I would be remiss to say that no one thought that this was something the neighborhood needed. Every single one of my foodie friends who knew I lived above Bar Marta were texting and emailing me upon the announcement in the press.

Not even a month after Bar Marta closed it’s doors, Heritage Caviar Bar and Restaurant has opened the doors. I was delighted when I was invited for a menu preview for writers and instagrammers. I attended the “neighborhood welcome” a few days prior, but I was anxious to get a full idea of what the menu would be like. Described as “Chicago’s Only Caviar Bar”, Heritage promises to deliver a menu of Eastern European influence, from beef heart pierogis and caviar, to crudos, breads and vodka. 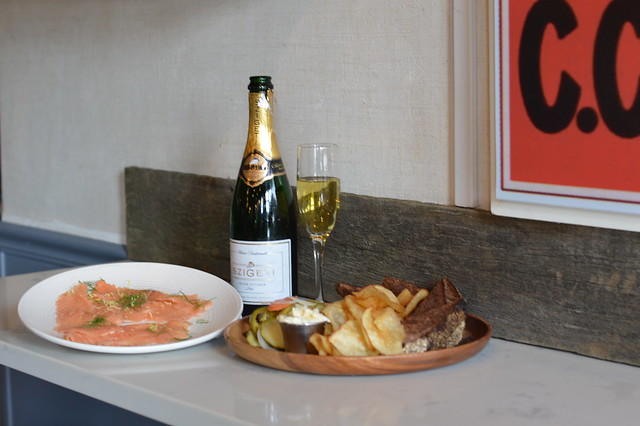 I arrived to be greeted with a glass of champagne, which obviously was a great start to the meal. As I took in the space, it was evident that not much had changed from the design of Bar Marta. A fresh coat of paint and some unique ornaments decorate the space, with pictures of fish, caviar and oysters along the wall. Gold accents are still present, and above the bar is an array of Vodka’s displaying the strong Eastern European presence in the restaurant. An addition of a caviar and oyster bar that shows daily offerings on ice is a neat new element. The patio is also now adorned with umbrellas and hanging lights, but it is apparent that they were anxious to open and decided not to change much of the interior as a result. 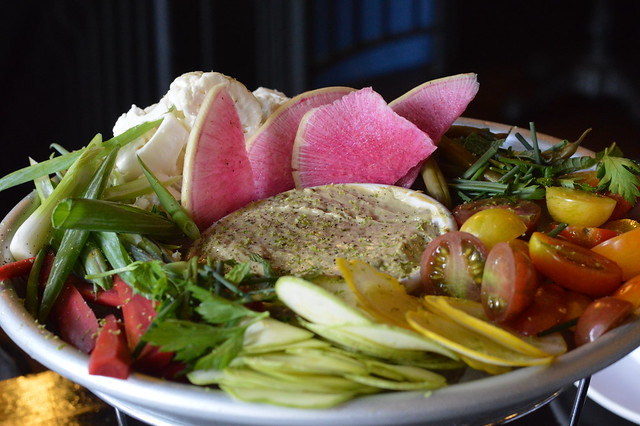 Anxious to try the caviar, among other menu items, I joined the other ‘grammers as food was brought out and delivered to the tables for us all to try (and photograph). I believe they brought out almost everything on the menu, if not it certainly seemed like it. I will highlight my favorites from the bunch! Up first were a selection of oysters and crudites that came beautifully presented, worthy of all the instagram photos. I love oysters and champagne on a summer day, so this was delightful. 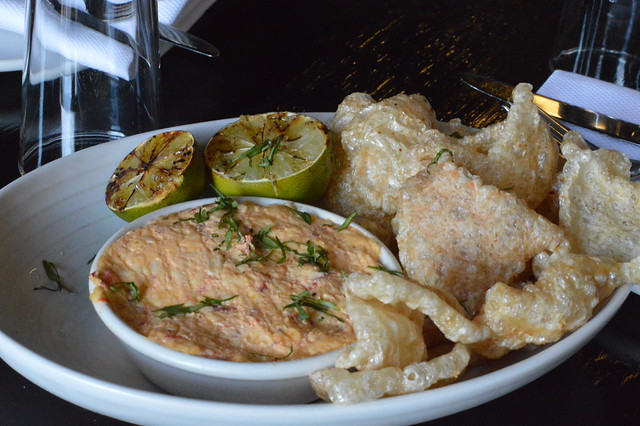 Next was a pimento cheese spread that was to die for, served with chicharrón chips for dipping. Everyone was obsessed with this spread. Another starter dish I was excited to try was the Khachapuri, a traditional Georgian and Eastern European dish of cheese-filled bread. This one came topped with an egg, which just added to it’s beauty and deliciousness. Additionally dumplings came out, and they were stunning. Made with duck and foie gras, it goes without saying that these were rich, savory, and delicious. 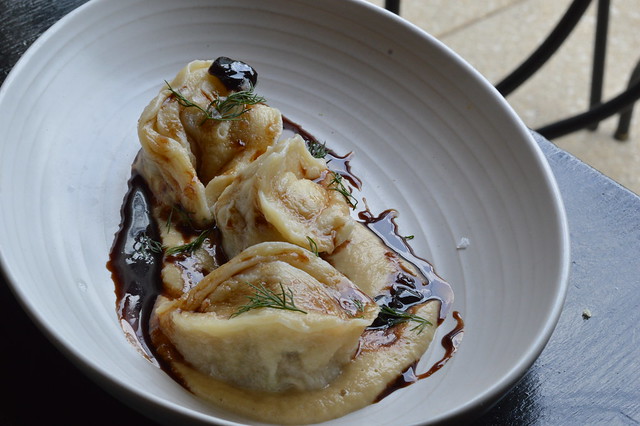 Several entrees were presented, among them a variety of cheeseburgers, including a burger made with ground short rib, sirloin, and prime ribeye, Hook’s cheddar, garlic aioli and home-made pickles on brioche, which was supremely rich and delectable.  A brined and wood-fired pork chop over creamy grits with green oysters was presented as well and it was a massive portion. I am not sure the price on this dish, but I imagine it won’t come cheap. 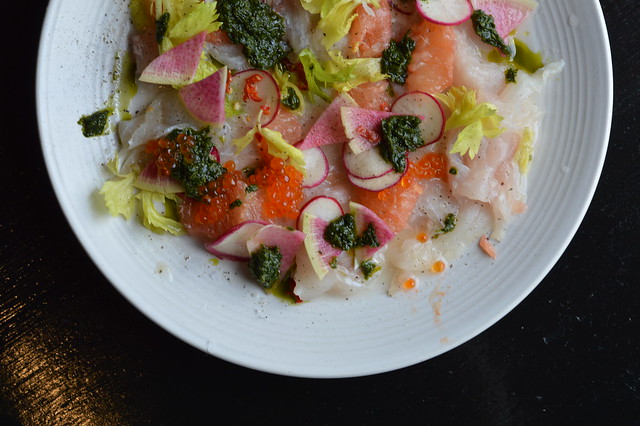 The finale of our intense and exciting tasting at Heritage was, of course, the crudo and caviar. Chef Guy first did a presentation of how he prepares the crudu and we all watched anxiously as he sliced, seasoned and plated the fish. This is presented beautifully, with lots of components to enrich the flavor of the fish and add depth to the dish. Some smoked trout was also shared, which was equally delicious, and tasted as good as any fully authentic Eastern European restaurant, in my opinion. 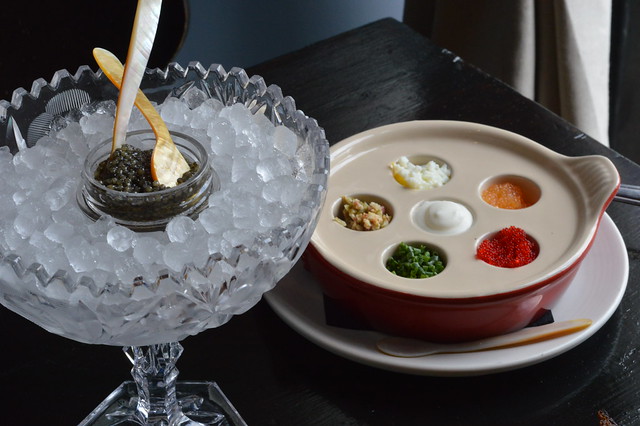 He also showed us a special presentation of the caviar, courtesy of his wife’s grandmother’s crystal dish. A little can of sturgeon caviar was delicately placed in the dish full of chipped ice. Caviar, as we learned, is to be consumed with pure gold or mother-of-pearl spoons, because metal and steel utensils can oxidize and alter the flavor of the caviar. Served with a tiny little escargot platter of accompaniments for the caviar, such ass egg white, chives, red onion, crème fraîche, and other red and yellow caviars, the presentation is just exquisite, and it was the perfect finish to our dining experience. 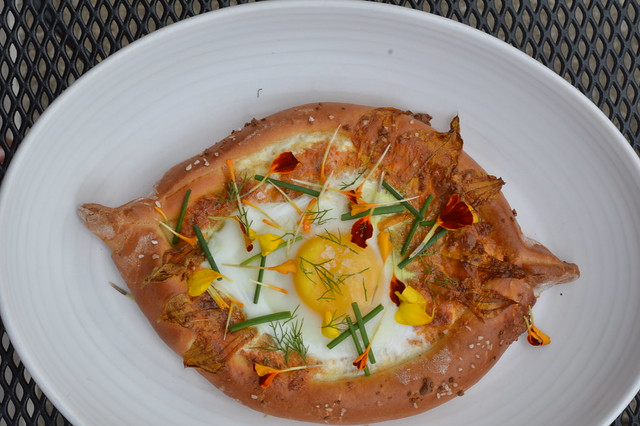 Heritage, I am super happy to welcome you to the neighborhood. With the added fact that the restaurant will be serving breakfast, lunch and dinner seven days a week, this brunching Bitch and writer is ecstatic to have a new hangout spot all hours of the day, and an upscale watering hole to drink and dine with the hubs after work. I wish Heritage luck though, and do hope that the restaurant succeeds in the location much better than it’s predecessors. I am curious to see how it will be received after the grand opening this Friday, August 11th and whether or not it is a good fit for the neighborhood. With the promise of menu items of all prices points, I hope that people are not intimidated by the “Caviar Bar” title, nor apprehensive to check the space out, due to the high price point associated with such an item. If the restaurant truly succeeds in executing menu items that work for everyone, I think the Heritage Restaurant and Caviar Bar will have great success in the neighborhood and I am excited to be a regular patron.

Look out for a Brunch review once the restaurant begins offering breakfast and brunch service, and a dinner recap when I go in for a full meal experience. In the meantime, I say Nostrovia! Thank you for having me in to check the space and menu offerings, I look forward to seeing you again soon.