Often, when restaurants in the DMV start to get a following, their menu freezes in time and food and cocktails stop evolving. As a result, popularity diminishes and eventually, we bid adieu to a longtime favorite. Thankfully, Pearl Dive Oyster Palace is an exception to this rule. 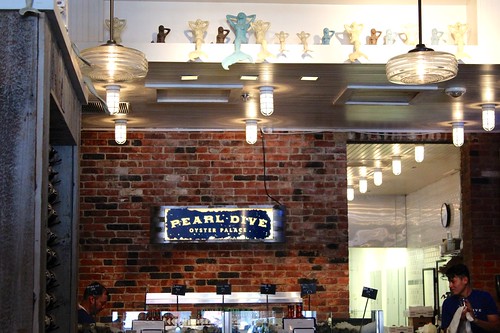 The beloved 14th Street eatery boasts an assortment of high-quality oysters and drinks to match. It has been seven years since the Bitches dined at Pearl Dive, so their wonderful staff invited us back to try an improved brunch spread fit for any occasion. 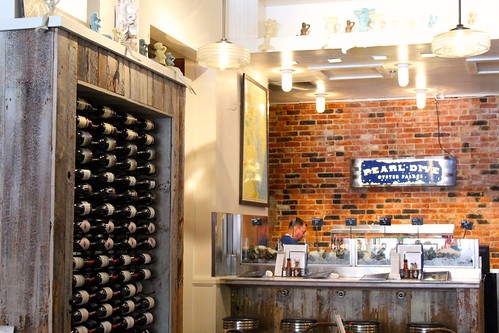 The decor is straight out of New England with a splash of southern charm. The exposed brick is an instant head turner, and you’ll lose count trying to figure out how many wine bottles are perched inside the rustic looking bookshelf. Everything screams nautical, but in a tasteful way.

My friend Iris and I were greeted by Cloe, who serves as the general manager. Not long after being seated, Dave – another member of the managerial staff – arrived to suggest a few of his menu favorites. To kick off our afternoon in seafood heaven, Iris and I ordered a round of bloody Marys. 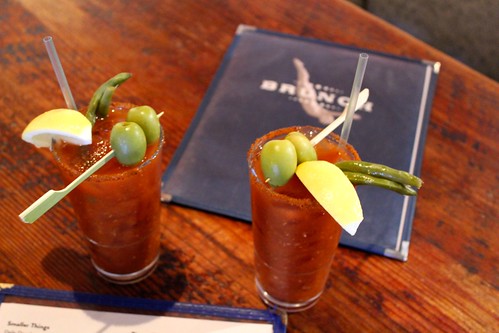 My first sip instantly transported me back to dewy, New England mornings, where you can practically taste the saltwater. Their housemate tomato mix is one of the best I’ve ever had. We wanted to order the daily doughnut, but David suggested we get that for dessert instead and opt for their heirloom tomato salad. 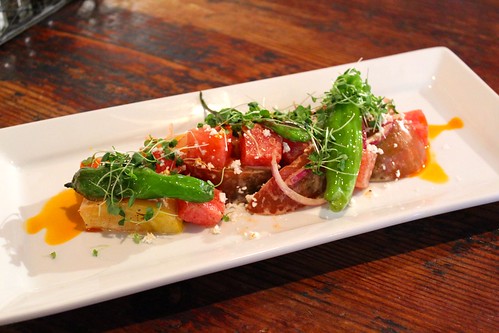 I encourage everyone to start with this salad, composed of watermelon, goat cheese, red onion, blistered shishito peppers and tossed with an orange-chili vinaigrette. Visually, the plate is stunning. Taste-wise, it’s even better! The tomatoes are robust, juicy, and complement the sweetness of the watermelon and the tanginess of the goat cheese. The peppers lend a spice element, but it’s really the chili-lime vinaigrette that steals the show. It added more depth to each of these flavors.

This is a place known for oysters, so we weren’t leaving without trying some. Pearl Dive receives a shipment of them from across the nation daily, and we tried three kinds from Washington, Connecticut, and Maine. They’re accompanied by your standard cocktail sauce and house made favorites. Lime, cilantro, and jalapeño make up the “dive juice” while orange, ginger, carrot, and rice wine vinegar come together to yield “tilt juice.” A teaspoon goes far for both, since you don’t want to overpower the actual meat. 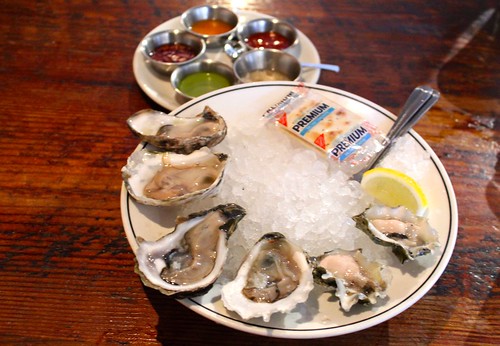 As expected, the oysters were terrific. Slightly briny, exceptionally fresh, and a nice follow-up to the salad, they were the ideal palate cleanser as we prepared for our main fish.

I opted to go with a non-traditional brunch dish at Pearl Dive, the “wood grilled gulf redfish.” The protein comes with a side of cayenne stone grits and is generously topped with sage and Texas pecan brown butter. Iris followed suit and selected the salmon and latkes as her main platter. House cured salmon with a side salad of chopped egg, crispy capers, and red onion. 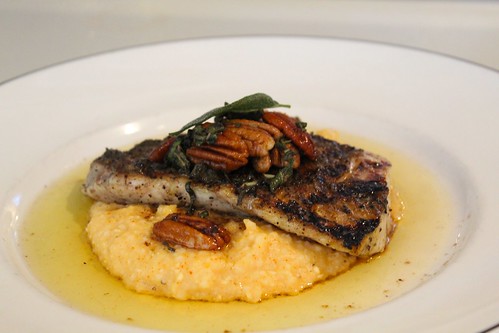 The redfish is flavor overload, and I mean that in the best way possible. One bite you’re tasting the flaky and well-seasoned fish and another you get the creamy grits with the brown butter serving as your aftertaste. The pecans are the crunchy addition I didn’t know I needed, especially because they’re lightly toasted and function as more than just a garnish. 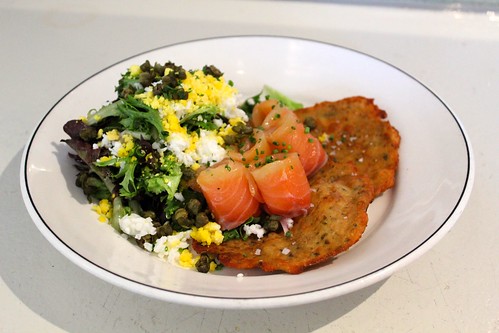 Don’t be taken aback by the non-traditional latkes in the salmon dish. The salmon was tender, nicely seasoned and offset the crispy, thin pancake. I have never claimed to enjoy the taste of capers, but they actually worked great in the salad that accompanied the dish. There was absolutely nothing to complain about with either entrée. 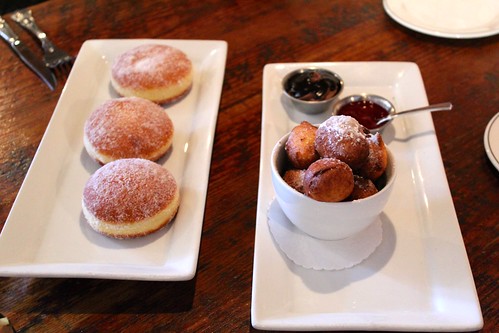 Onto dessert! Like I said, we saved the daily doughnuts for last, and I’m so glad we did. During our visit, we were treated to a pastry filled with Bavarian cream and topped with powdered sugar. We splurged and ordered one more item: the ricotta beignets with cream cheese syrup, chocolate whipped cream, and morello cherry compote. Truly exquisite. While the two dishes are admittedly similar in the deep friend dessert world, their accompaniments made the flavors distinct. As a parting drink, we sipped on espresso martinis. The right combination of coffee and Kahlúa provided the perfect closure to a delightful afternoon meal.

I could eat here every weekend if given the opportunity thanks to the wonderful staff, delicious plates, and exceptional atmosphere.