Chicagoans have long flocked to Parson’s. The restaurant chain recently expanded beyond the Logan Square and Lincoln Park locations to Nashville. The expansion was eggscellent news for my quest of finding the best chicken sandwich. If Parson’s was ready to set up shop in the home of hot chicken, their brunch must be no yolk. 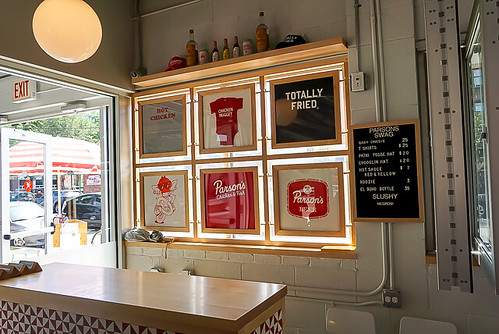 When Bitches Who Brunch originally reviewed Parson’s, they had not yet released they’re dedicated brunch menu. The Logan Square restaurant kindly invited me in to try out the brunch menu.

My boyfriend, Cam, and I went on a lovely, warm Sunday and opted to sit outside. Parson’s has a wonderful patio, adorned with red and white striped umbrellas and picnic tables. They have a counter bar, a ping-pong table, and a fun beachy vibe. It is a spot that invites a leisurely brunch and day-drinking–and I was happy to oblige. 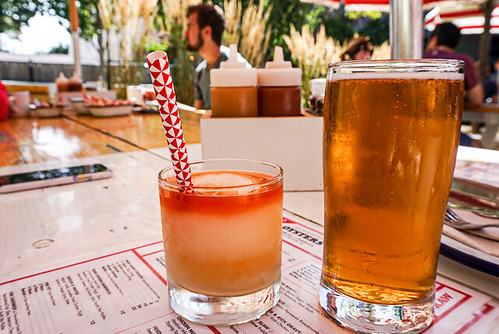 Our waiter walked us through the seasonal cobbler (peach) and helped answer any questions about the menu. To start, Cam ordered a “ride or die” ale from Hopewell Brewing. I went with a frozen “pisco control,” a lemony slushy that was equally refreshing in the heat and delicious to drink. I’d been tipped off not to skip the frozen drinks at Parson’s by friends who frequent the establishment, and I’m glad I listened. 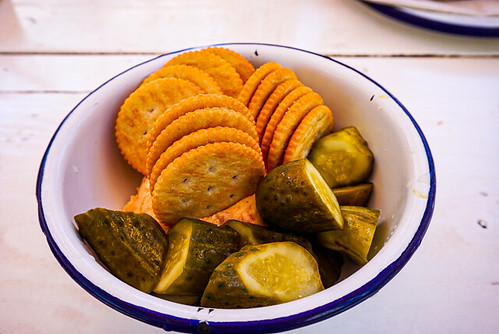 While we debated about our entrée selections, we decided to snack on the house-made pimento cheese dip. Being from the South, there are few things I hold in as much esteem as good pimento cheese. Parson’s served the dish in a bowl, covered with sizable chunks of dill pickles and butter crackers. The presentation was simple and felt like something you’d snack on at home, which added to the nostalgia of the dish. It was delicious. The dill pickles added brine and flavor to the dip. 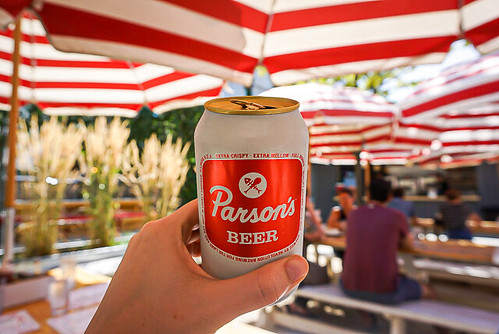 We both ordered beers for our second rounds. I switched to the “ride or die,” out of order envy for Cam’s nice beer in the sun. He tried Parson’s beer, in partnership with Revolution Brewing and labeled with the Parson’s name. It is a crisp, light beer that is palatable for even non-beer drinkers. If you’re looking to spend a few hours drinking and playing ping-pong, give it a go. 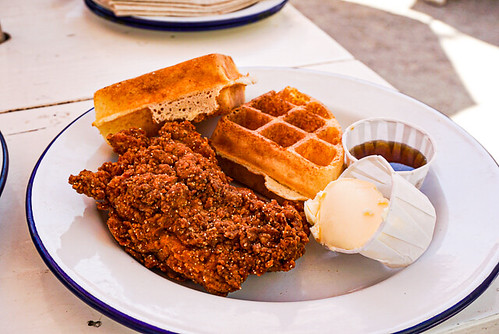 For his entrée, Cam went with the chicken and waffles. This is a favorite dish of ours and Parson’s nails the simplicity that makes the dish special. They served two sections of Belgian waffle with a fried chicken thigh, with sides of butter and syrup. The dark meat stayed moist and more flavorful than if it had been a chicken breast. If you’re a fan of heat, give the chicken a healthy bath of Parson’s own hot sauce, served in bottles on the table (and for sale if you’re a fan). There’s just something special about a spicy-sweet combo for breakfast. 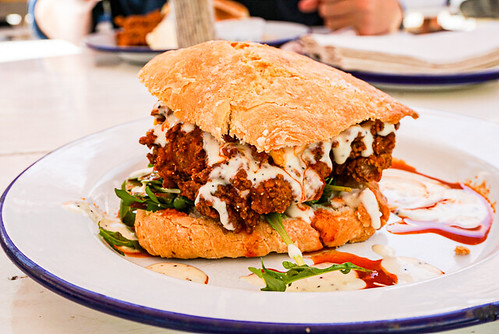 While everything on the brunch menu looked good – especially the option of doubling down on the pimento cheese scramble – I was not swayed from my quest to try the fried chicken and biscuit. It comes sandwiched between two thick square house biscuits with a chicken thigh, arugula, parson’s hot sauce, poppyseed dressing, and mustard vinaigrette. I added a slice of cheese for an extra $0.50. The behemoth sandwich that the waiter delivered could not neatly be eaten using my hands, so I opted for a fork and knife. The biscuit was dense and great for mopping up the extra sauce that got everywhere. Again, the dark meat was succulent and a nice juxtaposition to the crisp fried skin. As a cheese lover, I’m shocked to say the slice did not add anything to the dish, and you can skip it. 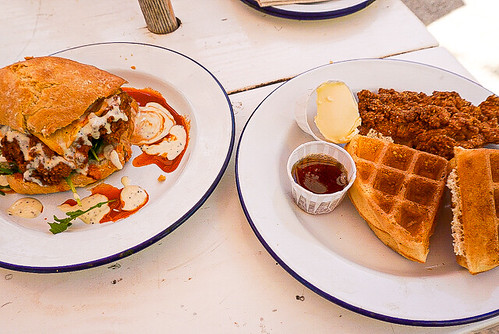 Overall, the sandwich exceeded expectations and hit the craving I had fostered since consuming four days of Twitter hot takes on fried chicken. While I will continue my “research” into the best fried chicken sandwich in Chicago, Parson’s isn’t clucking around. Definitely a top five.

Parson’s Chicken And Fish keeps its five flute rating for a fun and casual atmosphere and simply delicious food.