I rarely see something on a menu that scares me. Naturally, I gravitate towards certain dishes and usually steer clear of liver pate thanks to a traumatizing family prank when I was younger. (Hint: it wasn’t chocolate ice cream), but I’m otherwise an adventurous eater–you kind of have to be with this gig.

Last weekend, we were invited to check out the new weekend brunch at Oz, an outback-inspired restaurant in Arlington, on the house. My husband, Gavin, and I planned to meet up with our mates for a classic bro brunch—one where they licked their wounds from the night before. 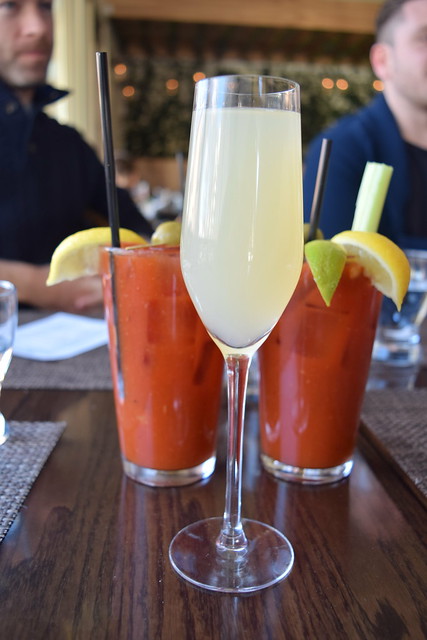 When you enter Oz, you’re greeted by two goofy looking stuffed koalas hanging from faux bamboo shoots in the entryway—in case you missed the memo that this is an Australian restaurant. It was early-ish, 11:30am, so the restaurant wasn’t packed yet, nor the crowd rowdy. I did immediately notice the lovely guitarist who serenaded us with live music throughout our meal. More to come on that gem. 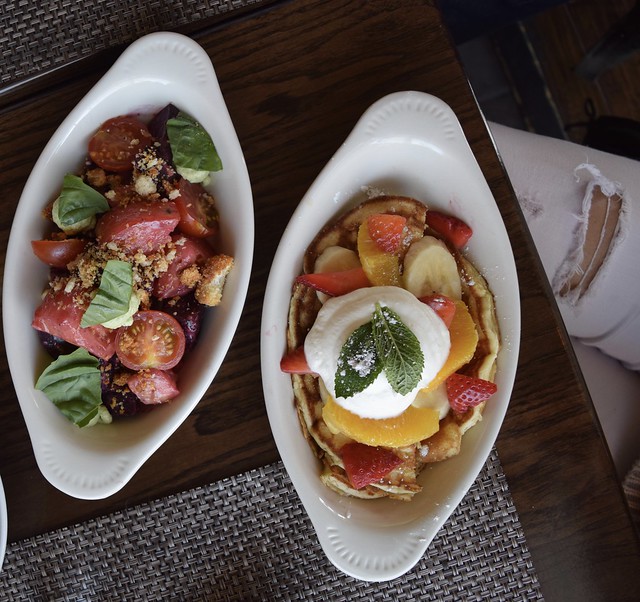 Gav and I ordered drinks to catch up with the guys, who already started on a round of Bloody Marys. I snuck a sip and they were delicious, but packed a seriously spicy kick. In the name of research, I ordered a grapefruit penny mimosa. It arrived, and although it definitely wasn’t grapefruit flavored, it was carbonated and dry and went down easy. The second time around I opted for a classic mimosa and it was just right.

Oz has an unbelievable bottomless deal, one of the best I’ve experienced around these parts. For $35, you can order bottomless food and penny mimosas, 50 cent craft beer (for non-beer drinkers, a good craft beer is usually upwards of $8-$10!), and $2 Bloody Marys. I honestly didn’t believe that the mimosas were only a penny, so I inspected the receipt at the end of our meal. Sure enough it read “.01” next to my penny mimosa. What a time to be alive.

In addition to the bottomless menu, Oz offers an extensive a la carte menu. Our group spotted options on each menu that intrigued us, so we ended up selecting a combination of dishes from both. We appreciated that the restaurant didn’t restrict our options. 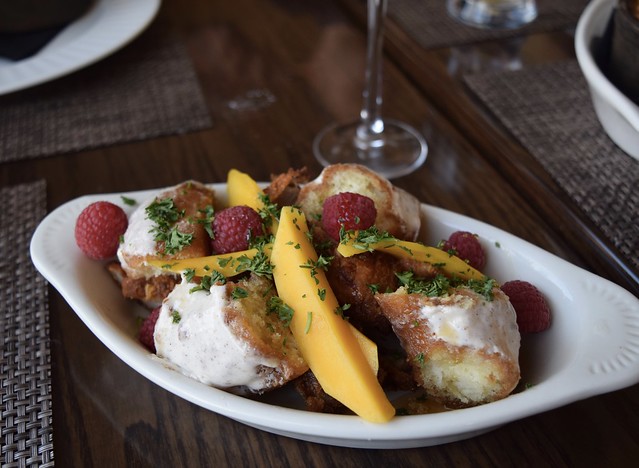 The chicken and doughnuts was a no-brainer. When the dish arrived, I think I squealed at the beautiful presentation. My bros concurred that she was a real beaut. I never expected bright gorgeous berries and fresh mango slices sprinkled on top of fried chicken and glazed doughnuts, but it worked. The pre-cut doughnuts and chicken made this dish approachable and easy. Just how brunch is meant to be. 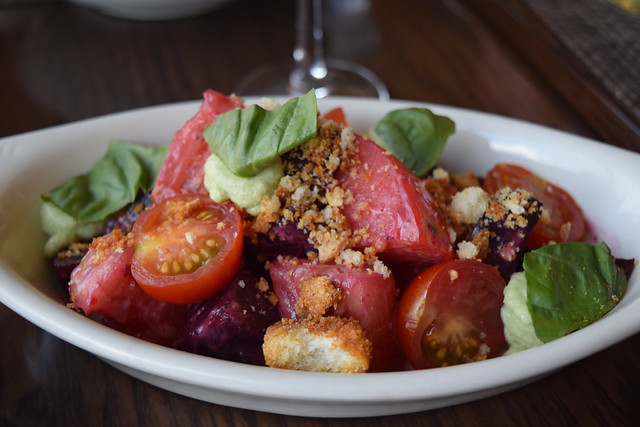 The beet salad was speaking to me (and only me). When it arrived the colors were vibrant, beckoning me to push the doughnuts aside and dig in. As suspected, this dish tasted like it was straight out of summer. The tomatoes were a mixture of heirloom and cherry, the beets were juicy, and the pesto dollops and basil just added to the freshness of the dish.

Gavin ordered the avocado toast without any solicitation. And after it came out, we devoured it and ordered another. This avocado toast was addicting. Although the hard boiled egg on the side went untouched, the spicy Sriracha sauce was the perfect combination with the crispy, creamy toast. If I was a betting woman, I’d also venture to say I tasted some butter under the avocado on that toast. 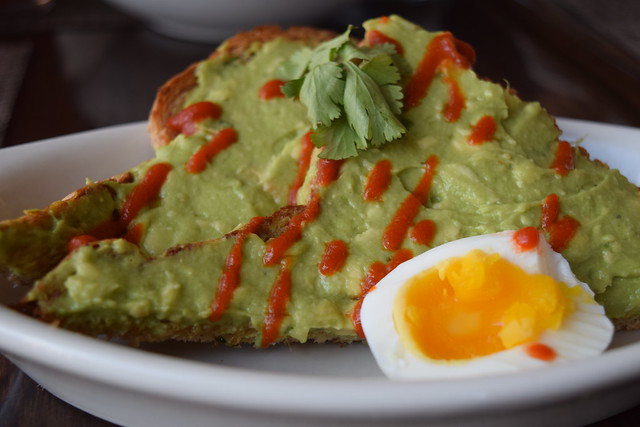 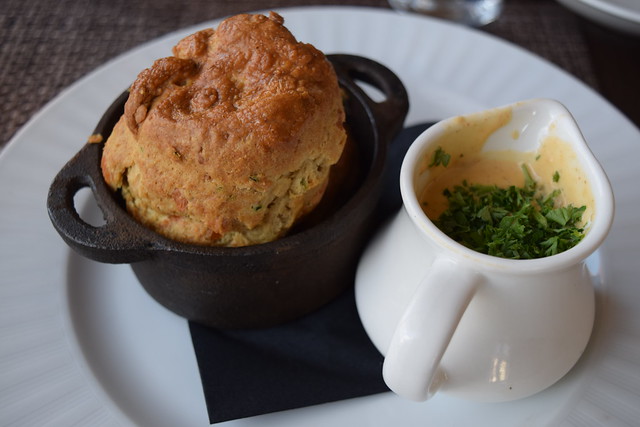 Despite me explicitly laying out the “no duplicate orders” rule, Matt and Danny both ordered the baked eggs. These guys. Thank God they did, because this was smaller than the other sharing plates and more of a single serving dish. Luckily, I snuck a quick bite of the hearty tomato, egg, and baked bean dish. It tasted like healthy comfort food and was cooked to perfection. This lasted a whopping four minutes on our table. 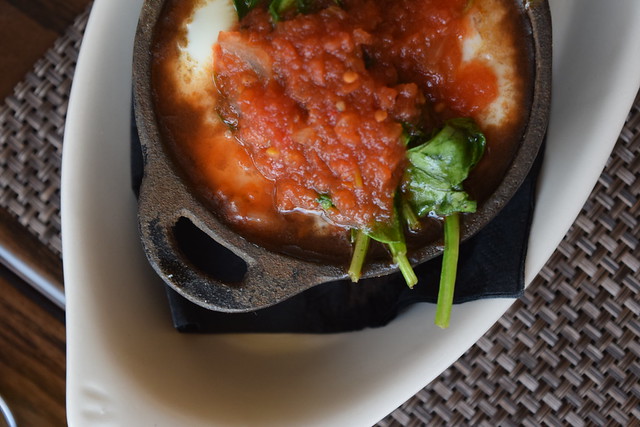 In the “Exotic” section of the menu we found the camel and kangaroo sliders. Since we’ve never seen these items on a brunch menu–and no bro brunch is complete without a little burger action—we had to give them a shot. These little guys were bloody good! They were juicy and tasted like a gamier version of a hamburger. The bite-sized portions were the perfect introduction to the “exotic” dish. Am I booking a flight to Australia to consume copious amounts of kangaroo and camel? No. But I would order them again at Oz. 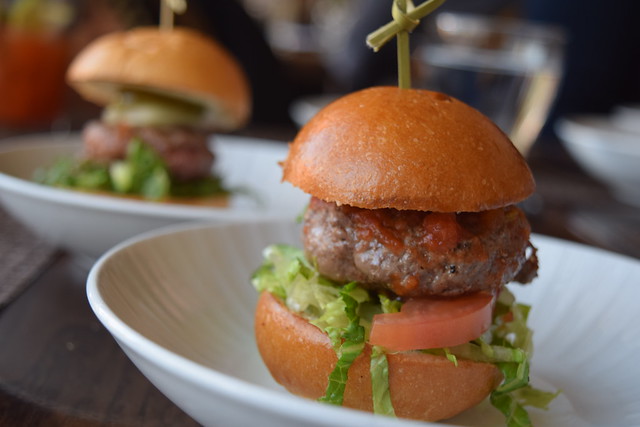 Dining with a bunch of over 30 lads, I wasn’t surprised when everyone capped off our meal with caffeine. Holding the only “under 30” seat at the table, it was my duty to keep the party going. So, I convinced everyone to order another round of drinks, in addition to the Aussie iced coffee, as a compromise.

This Aussie iced coffee was nuts. Matt and I looked at each other and almost in unison reported that we were basically drinking a caffeinated milkshake. It was made with cold brew, vanilla ice cream, and cocoa powder. 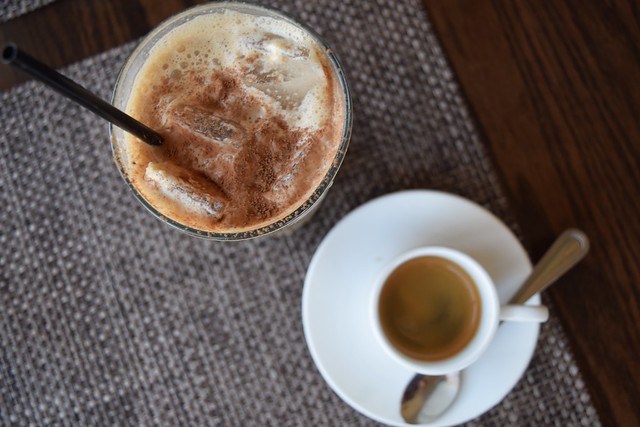 We should have called it a day, but the Pavlova dessert was apparently an authentic Aussie dish, so we tried it. I usually like meringue, but frankly it looked like Styrofoam and sadly didn’t taste much better. 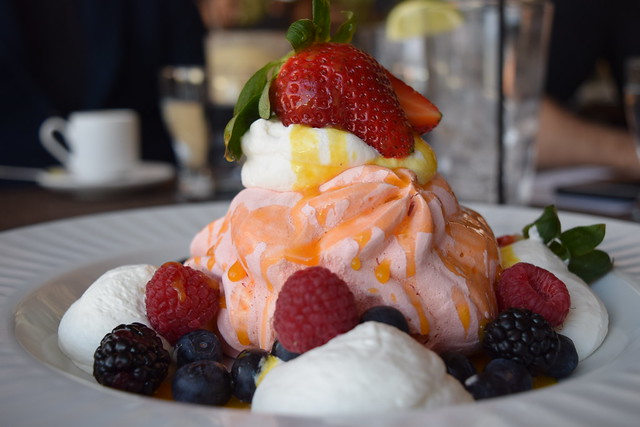 We grabbed our round of drinks and sauntered over to the bar to get a good look at this guitarist who had been jamming out for the past two hours. Hello, Pressing Strings, I wish we discovered you about you eight months ago when we were planning our wedding. This one man show was a Jimmy Buffet meets Jack Johnson songbird and had the restaurant yelling “encore” after every song.

The Bitches say: B. A unique, hard-to-beat bottomless brunch option in Virginia. If we ever leave the city and head into the bush, we’d head right back to Oz for the one cent mimosas and live music alone.