I have a confession: I’ve lived in NYC since 2013, but I had no clue what going out east meant until I dined at a restaurant of the same name. (As a Virginia native, my thoughts were always directed due north in the summer toward Martha’s Vineyard.) Out East, a light-filled oasis of a restaurant in the East Village, references that Memorial Day to Labor Day weekend escape of a certain set of summer white–wearing New Yorkers for whom the word “summer” is not just a season but also a verb.

I’m talking about the Hamptons, of course. A range of towns on Long Island where the blurred lines between surf culture and Wall Street are no stranger than seeing Ja Rule at an art party in Southampton (this really happened to my friend) or a bunch of girls floating around on giant doughnut floats in an infinity pool (this really happened to about 5000 Instagram influencers). 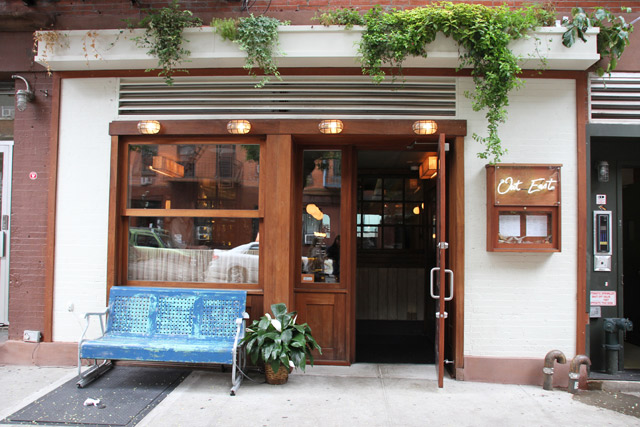 Out East in the East Village aims for the same upscale but approachable vibe, and when I was invited in to brunch with my two friends Emma and Sarah earlier in the summer, we thought the restaurant knocked it out of the park.

Clamshell-like pink banquettes welcome diners inside with warm coziness and beg to be Instagrammed, but the elevated wood tables, light pendants, and sunshine-filled atrium remind you to sit up straight and pay attention. There’s no slouching in the Hamptons—or at this establishment. 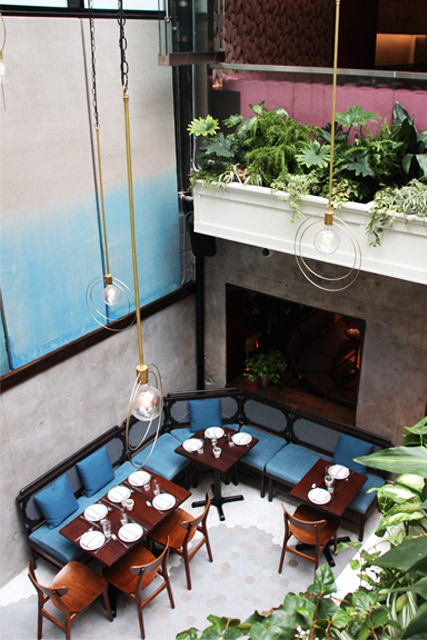 And pay attention we did. First we paid attention to our waitress and put in a round of drinks. And then we tried to pay attention the other diners (people-watching is basically an Olympic sport here in the city, and we’re going for the gold, baby), but there weren’t any to ogle.

Were they all at the Surf Lodge in Montauk? I wondered. Sheesh. (Truthfully, our visit came right when Out East launched brunch, so a far better bet is that no one knew they could dine there at 1 p.m. on a Saturday.)

No matter, we were there to eat anyway. And we began with a bite sent out from the kitchen—three little slices of pound cake with freeze-dried berries on top. It was a nice treat to start, but a bit of a departure from the seafood-heavy menu. I was confused but delighted, and I ate my piece in about 30 seconds. 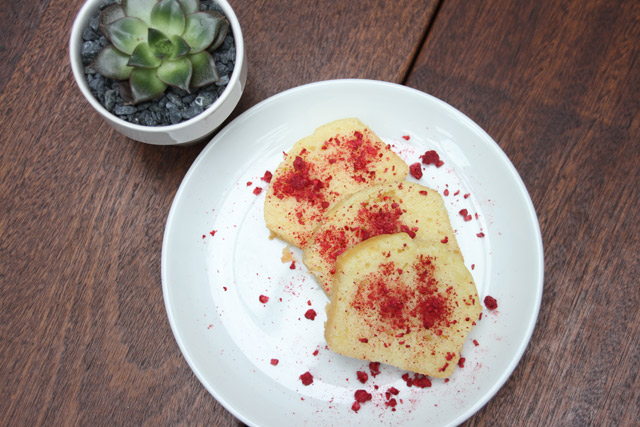 Our drinks arrived soon after. My apricot spritz was a refreshing and light mix of apricot liqueur, Manzanilla, and sparkling wine. It’s a sleeper hit that’s perfect for easy, day-long drinking. Emma’s classic Bloody Mary came topped with familiar accoutrements—a lemon wedge, cocktail shrimp, and green olive. She thought was good in a traditional way. Sarah’s Untitled in Green was the most interesting concoction of the bunch, a mix of cucumber, Thai chili, blanco tequila, and sweet vermouth. A slightly spicy drink for a very spicy girl—she enjoyed it very much. 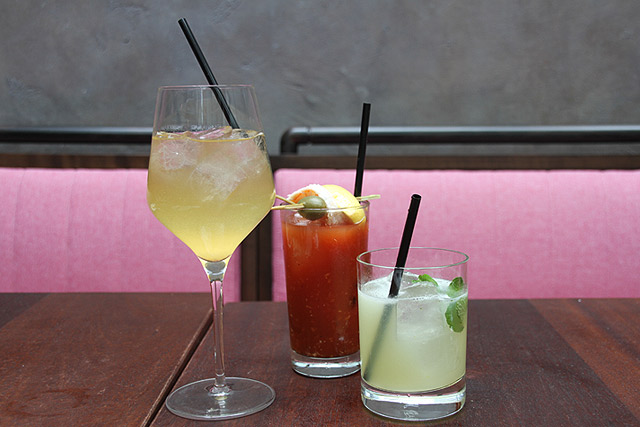 Oysters were up next (we only ordered a few) and came laid out on Old Bay–speckled ice. Alongside the mini squeeze bottles, it was a cute but inconsistently dispersed touch, like something you’d see at a seafood shanty trying to be bougie. 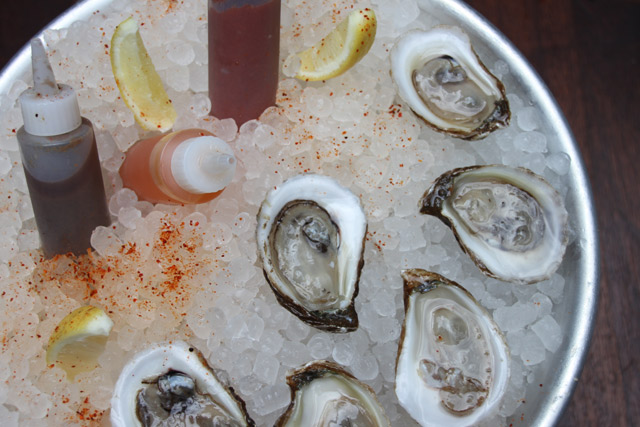 The heirloom salad that followed was the star of the meal. A mix of tomatoes, lemon verbena raita, and pickled turmeric, it was delicious and memorable. I used every last tomato to scrape up the sauce. When it gets to that point, you know a dish is tasty. 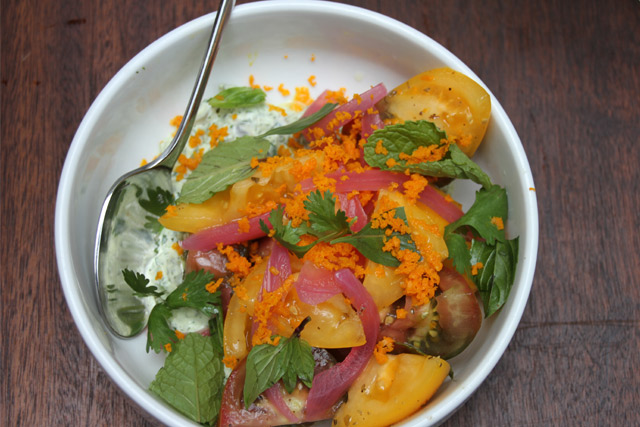 Entree-wise, two-thirds of the group made reasonable, lobster-filled decisions, and one of us was swayed by cheese. (What kind of girl would be swayed by cheese? Probably one who wears a pizza shirt.) 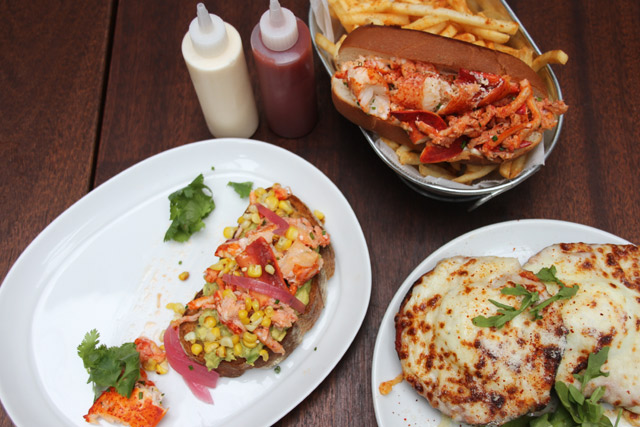 I have another confession: It was me. I was swayed by the cheese and the nostalgia of the pizza bagel underneath it. (What kind of girl goes to a seafood restaurant and orders a pizza bagel? See above.)

In my defense, the novelty of a pizza bagel on a restaurant menu that doesn’t also include fried mozzarella sticks and a .99 cent fountain soda is pretty hard to pass up. So too was the idea of a fried egg on said everything bagel from Black Seed Bagels—Black Seed, I tell you! 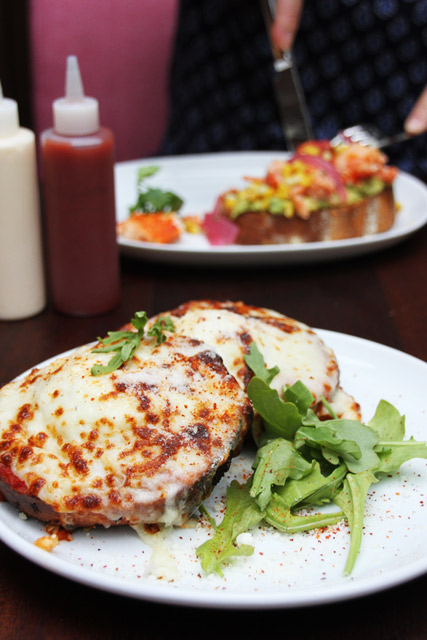 In reality, the put-an-egg-on-it idea was better in theory this time. I could have done without it, as it took away from the traditional texture and taste of pizza bagels I’ve known and loved. I could have also done without the bit of plastic that was inside the bagel, which our waitress took back to the kitchen and didn’t address again, nor did I ask. 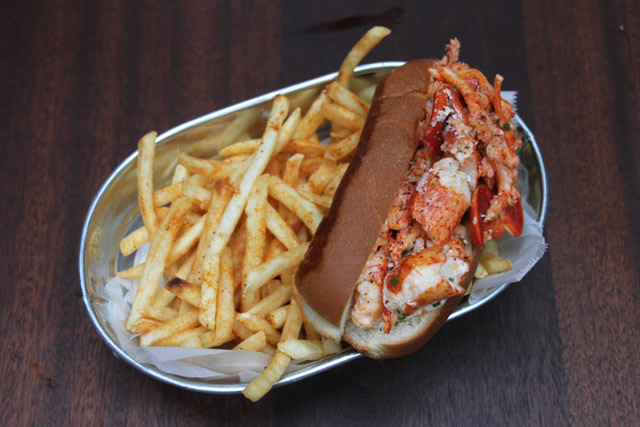 The lobster dishes hit both ends of the spectrum: familiar and trendy. Sarah’s classic lobster roll sat in a cute little miniature ice bucket on top of “New Bae” fries (literally just fries with Old Bay on them). She liked it but felt a bit like McKayla Maroney at the 2012 Olympics in London—not impressed. 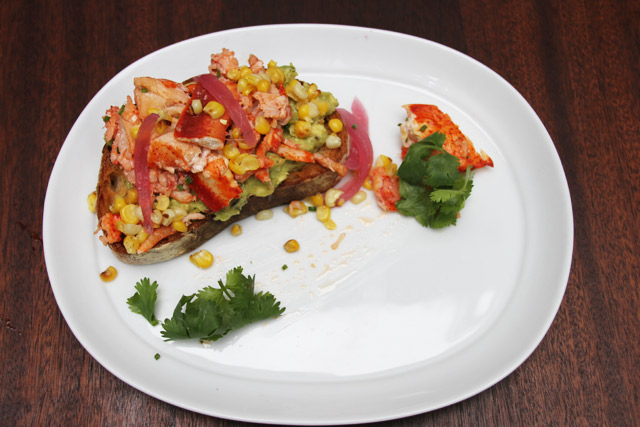 Emma’s lobster avocado toast was pretty good but left her a bit perplexed with its combination of ingredients that didn’t seem complementary: lobster, avocado, corn, pickled onions, and green goddess dressing on country bread. We think the corn would have been better left on the cob and off the plate. Across the board, the lobster on both dishes was tasty but lacking in the interesting flavor you’d expect from a place trying as hard as Out East.

The Bitches Say: Four Flutes. Out East’s dishes have a lot of promise, its drinks program is good, and it’s the perfect spot for a trendy brunch date or meetup with friends, but we wish the entrees left more of an impression.