Football season is upon us, and how can we choose between brunch and watching the game (or – more specifically – when you want brunch and your boyfriend insists on watching the game)?? Enter Old Town Pour House, which just kicked off a brand new brunch to satisfy all your weekend needs. The restaurant invited us in to try an array of brunch dishes and catch all of the college football games on the flat-screen televisions that line the wall behind the bar. 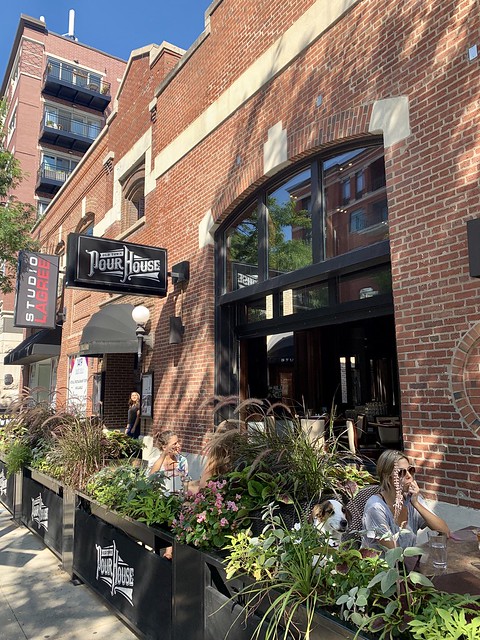 Walking past a small patio with several tables, my boyfriend, Alex, and I entered Old Town Pour House through a small courtyard off the main sidewalk. The interior of the restaurant is filled with rich, dark wood, giving it an upscale and old school vibe. The bar has gold accents that run almost the entire length of the restaurant, giving the restaurant enough room to have 90 different craft beers on tap. Hightop tables fill the space with booths along the walls. A giant staircase in the back of the restaurant leads to another bar on the second floor with additional seating. 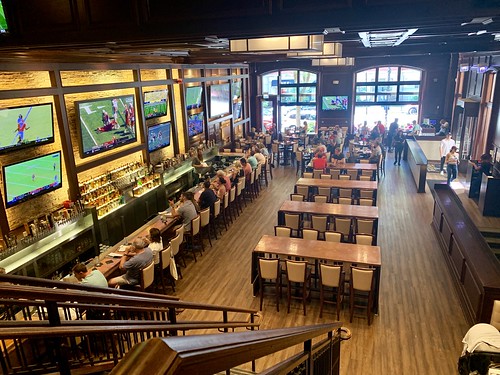 Alex had a tough time selecting a beer, but who can blame him when there are so many options? After a quick discussion with our waiter, he decided on the Cuvée des Jacobins Rouge, a sour from Belgium with hints of vanilla and dried cherry. The flavor had a little bit of maltiness to it and was sour without being too sour. Two thumbs up from Alex. My favorite part of this brunch was the mimosa flight. That’s not something you see every day at brunch, and it was just so much fun! Similar to their beer flight, the mimosa flight comes with four 6 oz sparkling wine drinks, and you get to pick the flavors! I chose the Bellini, rosé, tropical, and sangria options. The rosé was probably my favorite, with grapefruit rosé vodka, followed closely by the classic, peachy Bellini. The sangria was light with a nice layer of fruit on top, and the tropical mimosa was an elevated version of the rum punch you might get on a Caribbean vacation. This was a super creative way to serve mimosas, but if the flight isn’t your thing, they also offer a “make your own” option and bring out a bottle of sparkling wine and a few different juices so you can make them as strong as you’d like! 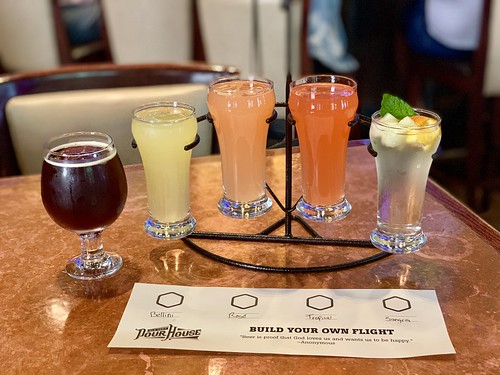 The brunch menu at Old Town Pour House has a rock ‘n’ roll theme to it, so we started our meal with the “jon bun jovi,” a large gooey cinnamon roll. So gooey, in fact, that we think the center wasn’t fully cooked. There was a slight crisp to the outside and they did a great job with the icing – a thin layer covered the entire bun that added sweetness to every bite without overdoing it. 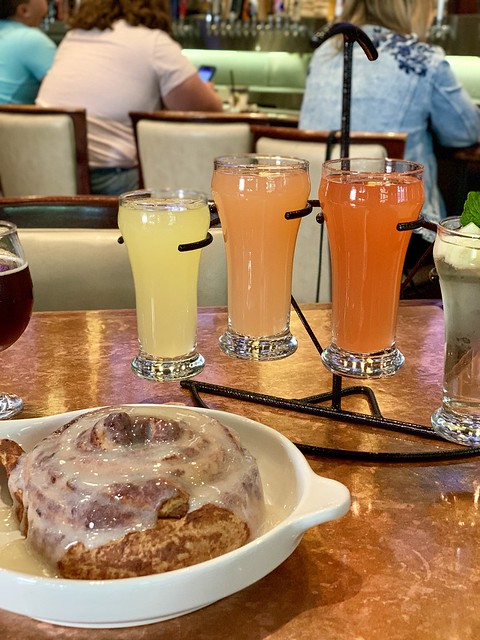 Alex moved on to the johnny hash, braised short rib, peppers, and onion over potatoes and topped with two sunny side up eggs. The potatoes were on the soft side, and the meat was a little fatty, but overall the dish was good. 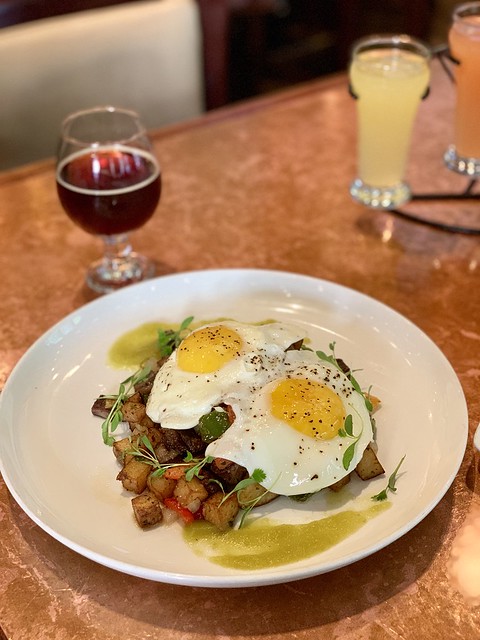 I went with the “clash smash,” a lighter option and Old Town Pour House’s take on avocado toast. I really like that they used hard boiled egg on this. It’s not something I usually see on avocado toast and was delicious and less messy. The corn topping looked like it was freshly cut off the cob and the pickled red onion complemented the red pepper and shaved radish. 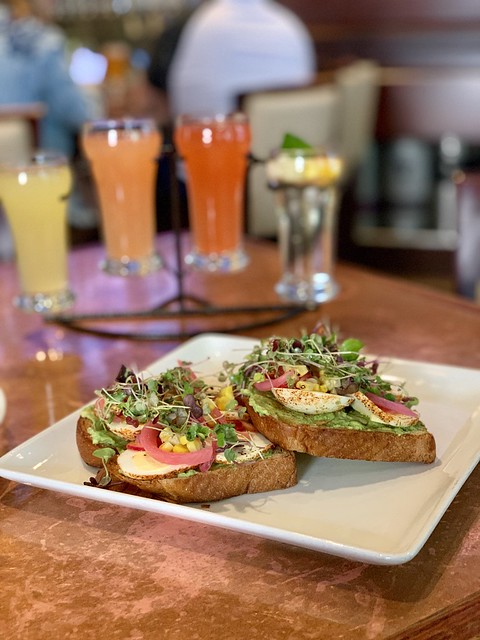 Our entrées were followed by beignets, which I would recommend skipping when you visit. These were pretty chewy, messy, and not very puffy – the opposite of the beignets you would see in New Orleans. The hazelnut sauce and berry jam were delicious, however. 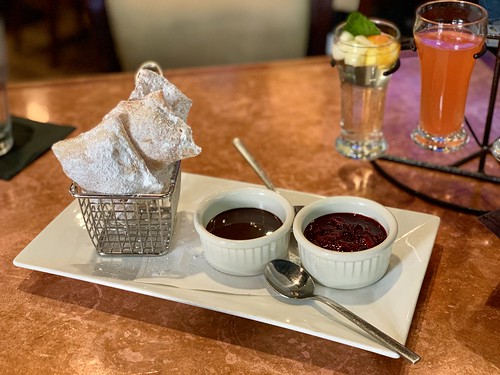 Alex and I had the opportunity to try a couple more dishes from their menu. Alex had “mother’s little helper,” also known as the “hangover” bowl. This dish isn’t much to look at, but pork belly, sausage, and eggs sit on top of a bed of cheddar grits. Um…yes please. The grits tasted incredibly cheesy, and the pork belly had an excellent smokey flavor to it. 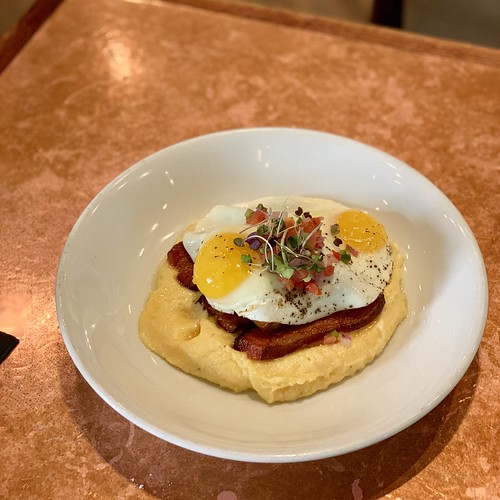 I had an egg white frittata with goat cheese, asparagus, and tomato topped with avocado and arugula. Old Town Pour House calls this the “white wedding.” The goat cheese was incredibly creamy and it went well with the perfectly ripe avocado. The egg was a little on the dry side, but the flavor was great with the mixed vegetables and just the right amount of salt and pepper. This omelet is another good, light dish to enjoy here. 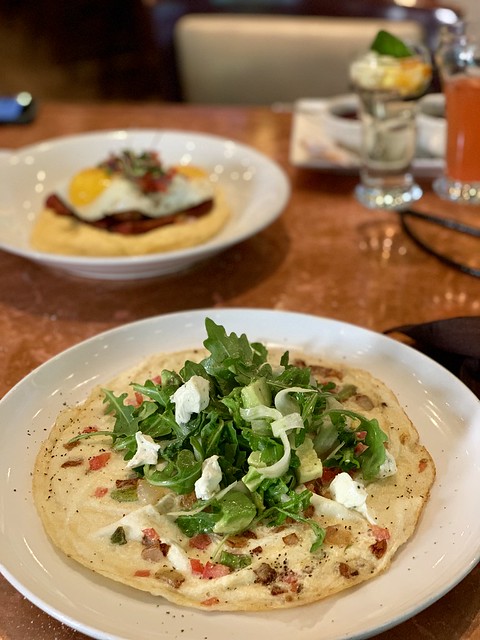 Old Town Pour House is an upscale Old Town bar with great light and savory brunch options. Do not skip out on the mimosa flight!