Nosh and Booze is a lovely little pop-up restaurant in the West Loop that opened mid-summer and will be here until December. I went to check it out for drinks with girlfriends back when it first opened, and since I liked it so much, I decided to come back and check it out for brunch. 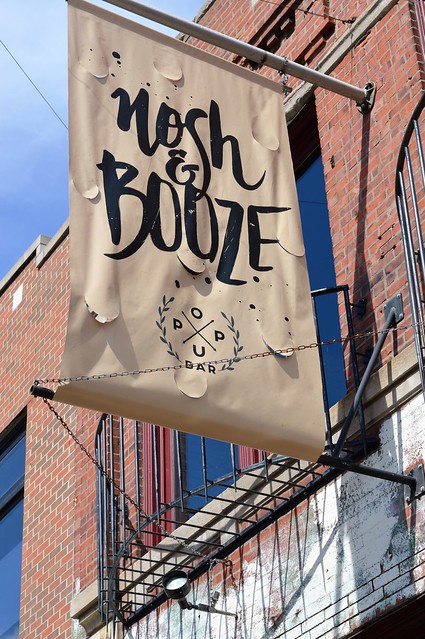 Nosh and Booze is on Restaurant Row, right in the heart of West Loop. It is a great space, perfect for a tenured restaurant, but certainly ideal for a pop-up shop too. The interior is industrial, yet simple, so I imagine it would always be a great backdrop for any restaurant’s concept. In Nosh and Booze’s case, the concept is American street food and craft cocktails, and the interior reflects that.

Graffitied exposed brick walls and industrial touches, amidst the open windows at the front of the restaurant allowing for loads of natural light, make this spot an excellent choices for evening cocktails, or for brunch on a gorgeous day. 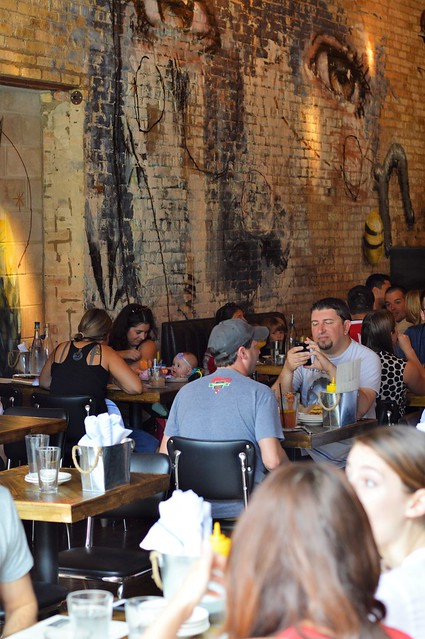 My friend Ashley and I had plans to brunch and watch the Redskins play an early game this past Sunday. She lives in West Loop, and since I had been wanting to check out the brunch at Nosh and Booze for quite some time, I naturally suggested it.

I didn’t have reservations, but I assumed it wouldn’t be a problem. Well, you know what they say about assuming… Thankfully, Ashley and I were lucky enough to secure a nice two-spot table at the front of the restaurant.

The patio was open but temps were reaching the 90s and it was just too hot. No sooner, though, the restaurant was completely full and I overheard that the wait time was 45 minutes about 10 minutes after we had been seated. 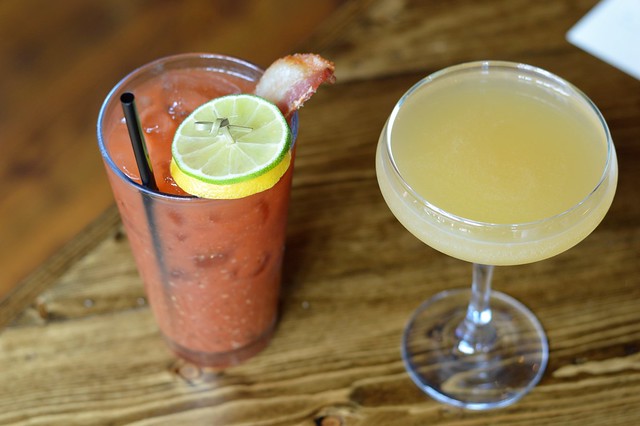 Nosh and Booze serves American-inspired street food; think guacamole, meat on a stick, type stuff. While perusing the menu, Ashley and I decided to order breakfast cocktails. The Bloody Mary for me, and the mimosa for her.

My Bloody came with a strip of bacon as its garnish, and loads of green chili seeds at the bottom of the glass. It was thick and strong; just the way I like it. Ashley’s mimosa was called the Mad Cap Mimosa. It was the restaurant’s take on a classic mimosa, made with Deep Eddy grapefruit vodka, banana liqueur, fresh orange juice, and bubbles. She loved it, and after trying it, I loved it too. 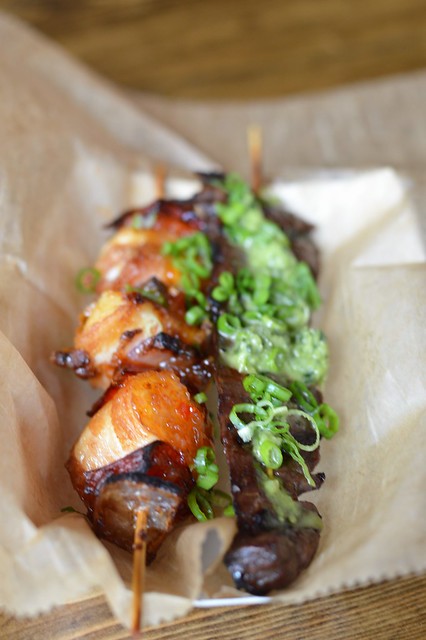 For starters, we inquired about the daily skewers. Our server informed us that there were two on this particular day, a bacon-wrapped halibut skewer and a chimichurri Argentinian-style steak skewer. We opted to get the “surf-and-turf,” one of each.

The skewers were delicious; the halibut came with a sweet chili glaze on top, and the steak skewer was grilled perfectly with a dollop of yummy chimichurri sauce—not a bad start to our brunch. 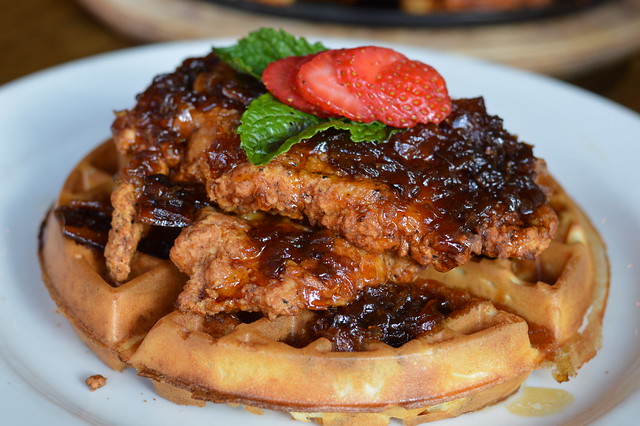 For entrees, I opted for the chicken and waffles; I just couldn’t resist. Ashley and I decided to share our plates, and thankfully we both had been eyeing the same dishes. Ashley went with our agreed second brunch entree contender: the chilaquiles.

My chicken and waffles came out with a bed of golden brown fried chicken on top of a brown sugar-bacon syrup, perfectly placed on a crisp waffle. I was excited to dig in. Little crisp specks of pepper glistened in the crispy batter. 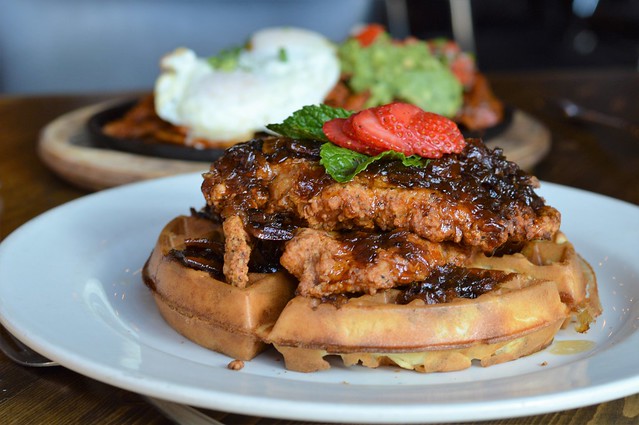 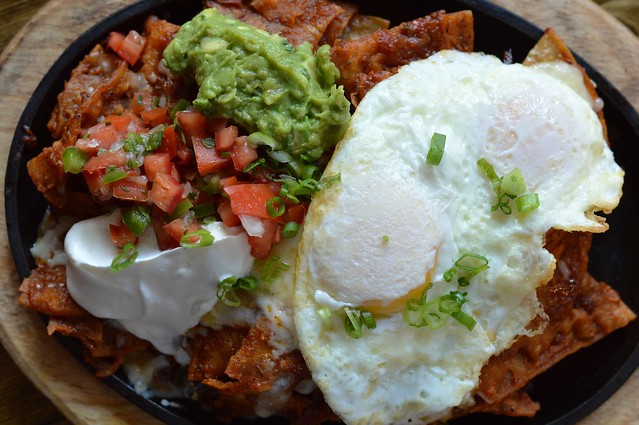 Ashley’s chilaquiles were awesome. It was a large portion; crispy tortilla chips and beef chorizo, topped with cheddar, pico de gallo, housemade guacamole, and sour cream. This dish has a little spice, but it was the perfect kick.

The guacamole at Nosh and Booze is top notch. It has heat and flavor, and went perfectly with the dish. She got her eggs over easy, and the runny yolk was the perfect savory complement to the dish. 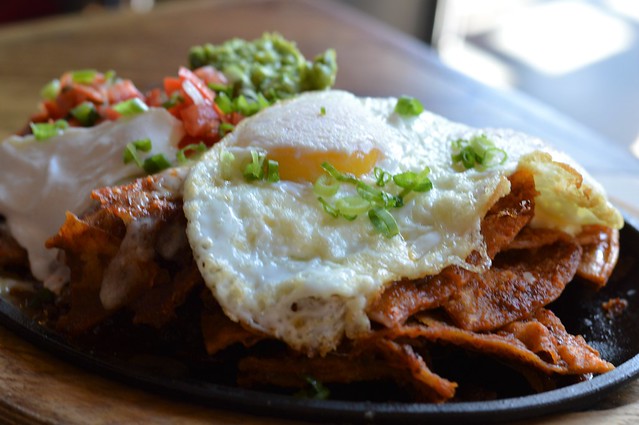 Overall, check out Nosh and Booze before it is gone in December. Having been for drinks and light apps before, I had credited it with being a little over priced for some of the dishes I got. Today was no different. The food was good, and I enjoyed myself, but it’s a little on the pricier side. I am okay with this being a pop-up and am glad I checked it out. I won’t miss it necessarily, when it is gone, but I did enjoy it while it was here and I suggest you do too!

The Bitches Say: B. This was a solid temporary addition to the restaurant-heavy West Loop neighborhood. The dishes aren’t anything to fly your mom out to Chicago for, but nonetheless they are yummy, the drinks are strong, and the ambiance is great. Go try Nosh and Booze before it is gone!

Nosh and Booze serves weekend brunch on Saturdays and Sundays from 10 a.m. until 4 p.m.