When you first think of the Chicago food scene, vegan paradise doesn’t come to mind. The iconic foods served in the famous steakhouses, hot dog stands, pizzerias all hinge on meat and cheese.

No Bones Beach Club is looking to change that. The restaurant first started as a food truck in Seattle and has grown to have brick and mortars in Seattle and Portland. In December, they opened a Wicker Park location.

Full disclosure: I’m not a vegan or even vegetarian. But I am an equal opportunity bruncher, and decided to put No Bones Beach Club’s motto “just because it’s vegan doesn’t mean it sucks” to the test. I dragged a college friend (another meat eater) along for the ride. 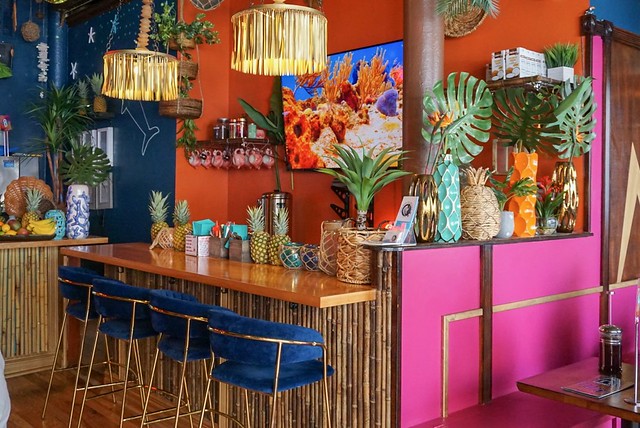 Walking into No Bones is like teleporting to the tropics. The aesthetic is Golden Girls beach-chic. Surfaces are adorned with pineapples and neon flamingos, and there are giant green palms. It is a nice escape from a chilly Chicago spring Saturday.

It’s counter service, so you don’t have to bother with reservations. The flip side of this is that seating can sometimes be an issue. We went at 11 a.m., but by noon the restaurant was pretty full. 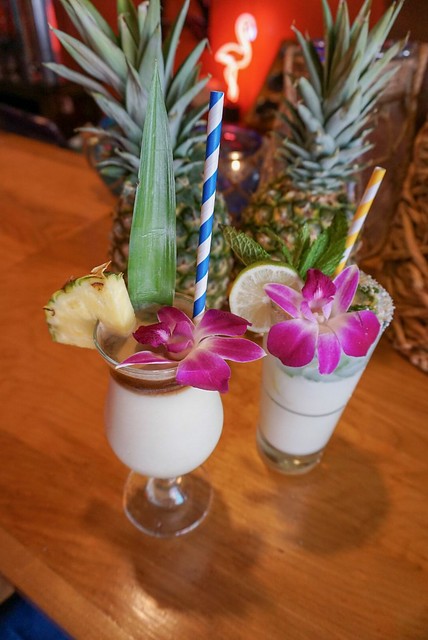 While No Bones does have the traditional brunch libations, they also offer fun tiki cocktails. We got the coconut mojito and a piña colada. The mojito has coconut milk and coconut rum and smells a bit like sunscreen, but tastes amazing. 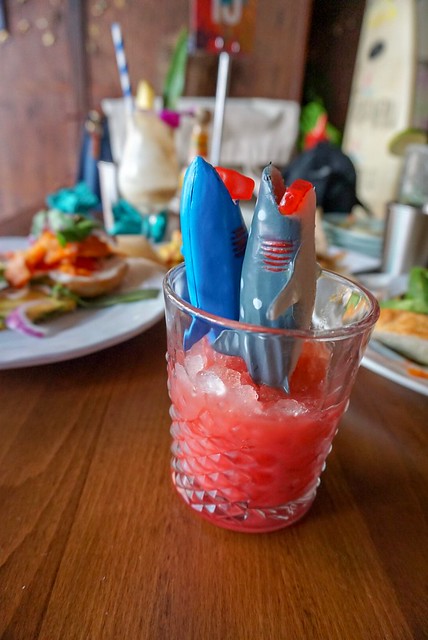 The piña colada has coconut milk, pineapple, and coconut rum with a dark rum float. It was refreshing and hard to not slurp down. We also got two shark shots, compliments of the house. Do not skip a chance to try these. Shark shots are fruity shooters are served in a plastic shark with a Swedish Fish as a chaser. Not only are they adorable and Instagrammable, they’re delicious. I wholeheartedly recommend getting drinks at No Bones. 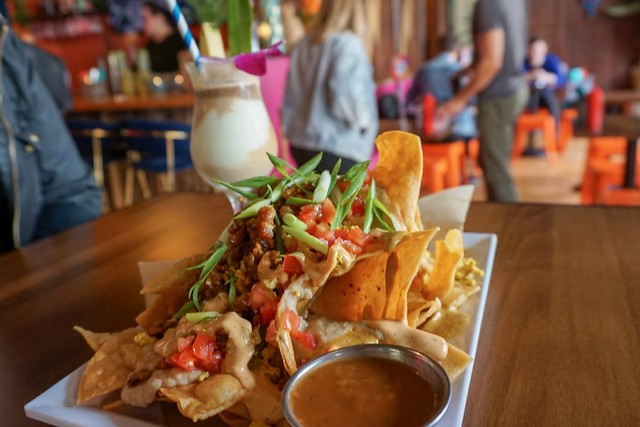 To start our meal, we decided to split the Brunchos, which are a combination of refried beans, cashew poblano “queso,” scrambled tofu, smoked pepper aioli, tomatoes, and salsa. We sprang for a side of guacamole as well. The Brunchos were my favorite part of the entire meal. The housemade chips are tasty and honestly, they taste exactly like non-vegan nachos. I was really impressed, because I would never skip out on cheese, but I didn’t even miss it! 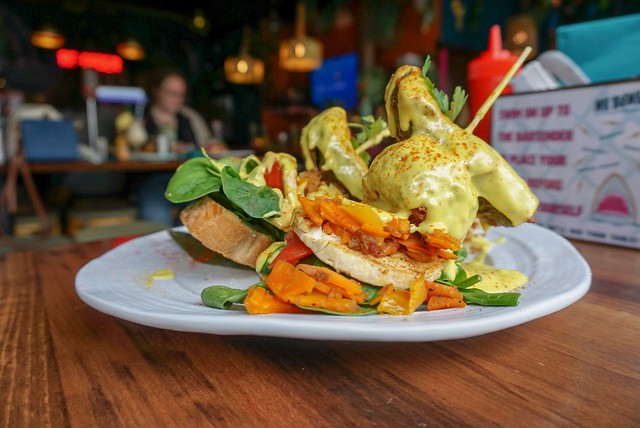 My friend opted to eat the Pipeline Benedict. It’s a massive feast compiled of veggie crab cake, fried avocado, smoked carrot “lox,” tofu, spinach, tomato and French bread. It comes with a side of hashbrowns. If you order this, skip the appetizers because it was extremely filling. It’s hard to imagine a vegan Benedict, since the dish hinges on perfectly poached eggs, but No Bones Beach Club did a great job creating a breakfast plate. 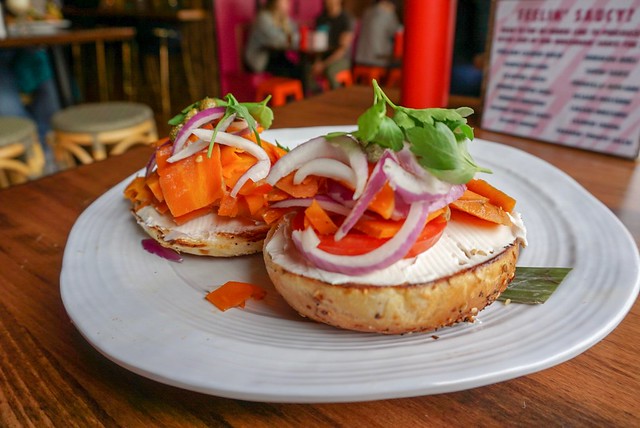 For my main dish, I selected the Ballard “Lox”—mostly because my last name is Ballard and it seemed obligatory to try it. The lox substitute, smoked carrots, came pretty close to the real McCoy. It was a light brunch plate and I finished my meal without feeling stuffed or weighed down, which was a nice bonus to a tasty meal.

While I won’t be changing my diet, I will suggest No Bones as a brunch location to vegans and meat-eaters alike.

The Bitches say: Four Champagne flutes! This vegan paradise offers scrumptious alternatives to the eggs and bacon brunch and the cocktails are top-notch.