I’ve passed Mother’s Ruin too many times to count, often on my way back to the F train after a night out downtown. A few times, I tried to pop in for one of their handcrafted cocktails, as I had always heard great things. But alas, the bar would be packed shoulder-to-shoulder, and I would make my way back home, with a box left unchecked on my NYC bucket list. 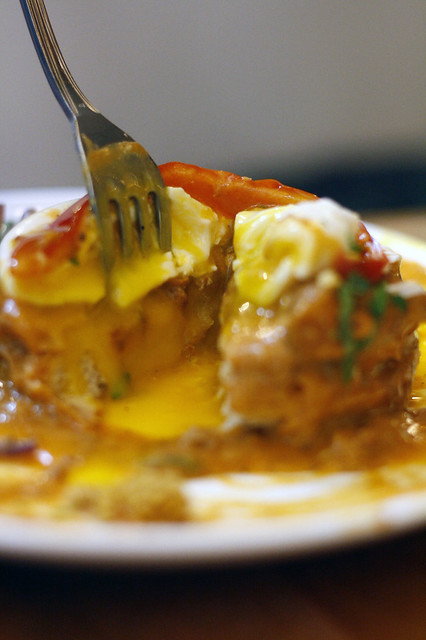 Fast-forward to a few weeks ago: My boyfriend and I decided to take a staycation in the city, and we were looking for a new place to brunch. The catch? It was a Friday. Weekday brunch options can be few and far between. Then it hit me–Mother’s Ruin had recently started serving weekday brunch! We could grab some food and finally try their cocktails, killing two birds with one stone. 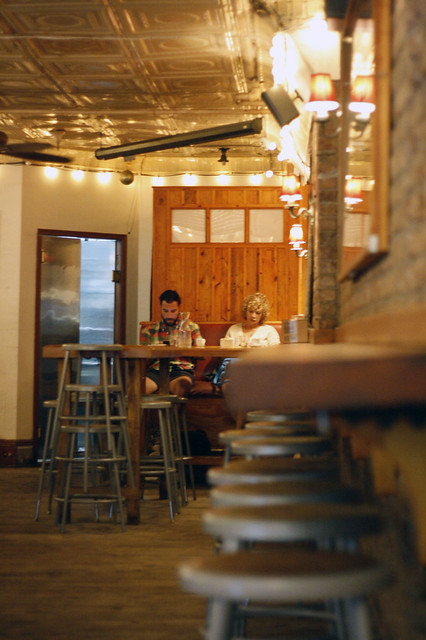 We made our way down to Nolita and popped into the neighborhood spot about 30 minutes after they opened. We were the first customers of the day, with the whole place to ourselves. The atmosphere is very much a casual, no-frills local spot with minimal decor–but that’s exactly what we were in the mood for on this particular day. 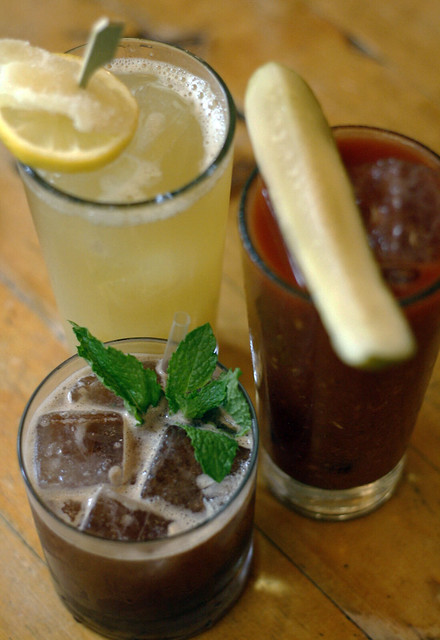 The service was attentive and friendly, even after a few regulars started to roll in. Even though he misheard our initial beverage order, our server let us keep the mistake beverage, which is exactly how we ended up with three cocktails before noon on a Friday. I took it as my good karma for never being able to make it in for a drink on my previous attempted visits. 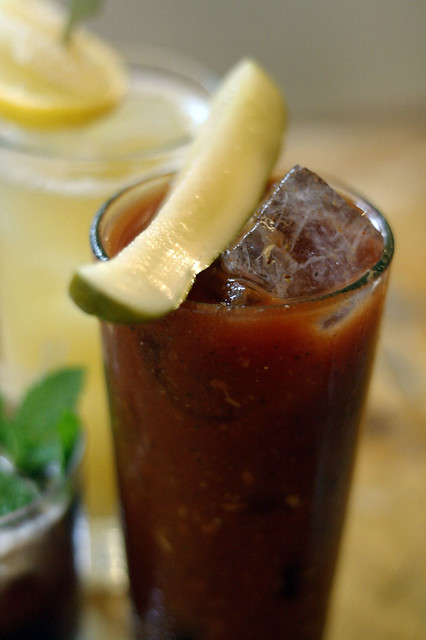 Together, we shared the Mother’s Bloody, the Mikey’s Shandy, and the Mother’s Cure. The Bloody was top notch, between the spicy house mix, complete with the perfect amount of horseradish and a dill pickle spear. We could have easily downed a few rounds of this cocktail alone.
The Shandy was full of a vanilla-y whiskey at first, but a tart amount of lemon and ginger soon followed. The pilsner rounded out all the different flavors and added a nice backbone to the cocktail overall. This was a great cocktail to kick off our brunch. 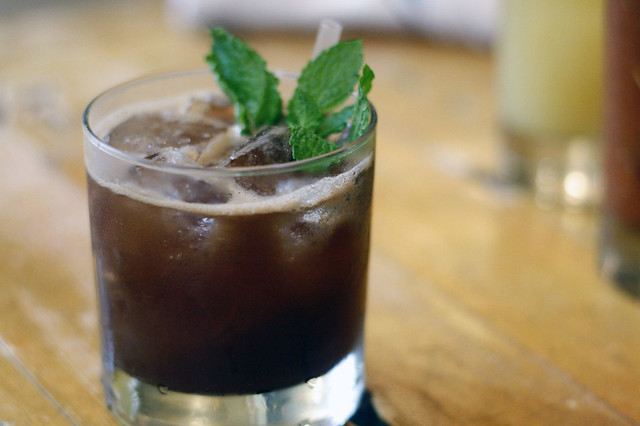 The Mother’s Cure–our “accident,” if you will–consisted of Cruzan Blackstrap rum, Lillet Rouge, ginger, lemon, and fresh mint. This cocktail had a hint of a maple syrup, which we think came from the Lillet Rouge, a spiced wine. For a rum-based cocktail, it was surprisingly light yet full-bodied due to the spice of the liquor. 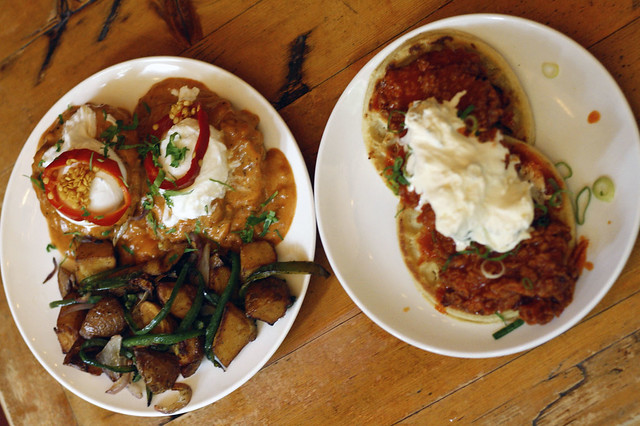 There were two entrees on the menu that immediately caught our eye: the ‘Eggo’ Waffles and Mother’s Biscuits & Gravy. I opted for the former, as I can never say no to fried chicken and waffles.
This was an inventive spin on a somewhat classic dish. Crispy chicken, drenched in a Cholula-honey hot sauce, was served over Eggos (literally–we asked) and topped with a whipped buttermilk dressing.  The homemade hot sauce more than made up for the lack of inventiveness with the waffles and the whipped ranch gave the dish a unique texture. We’ll definitely be back for another go at this brunch staple. 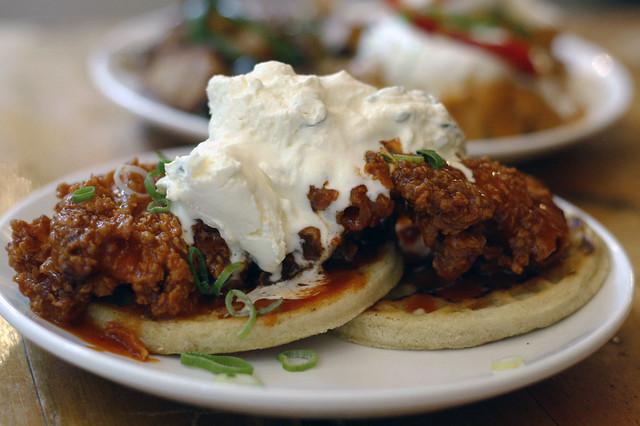 Fields went with Mother’s Biscuits & Gravy. He thought the buttermilk biscuits were alright, but they could have been a bit fluffier. The eggs were perfectly poached, and the spicy sausage gravy was divine. We both agreed the pickled cherry peppers were a clever addition that should be more common on biscuit and Benedict dishes. Their spice and tartness balanced out the richness of the rest of the dish. 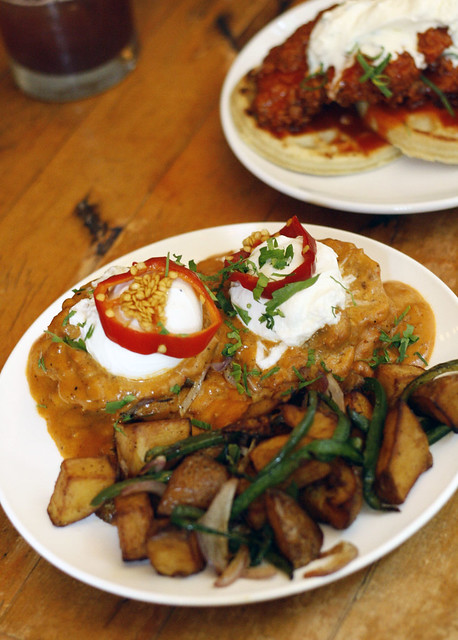 Not easy to please, he ended up dubbing this dish “one of the best sausage gravies I’ve had in New York, if not THE best.” We had planned to finish our meal with the challah french toast with chai whipped cream but were simply too full from cocktails, Eggos, and sausage gravy. Oh well–just an excuse to head back to this hidden gem for brunch another day!
The Bitches say:  Five Flutes. For a quick, no-frills brunch that’s sure to please, not to mention full of top-notch craft cocktails, head to Mother’s Ruin.