It’s a cause for celebration for some Washington, D.C. area restaurants. Michelin’s 2020 D.C. Bib Gourmand Awards came out in late September and there were a whopping 44 local restaurants named. Some of our favorites like Succotash and Tiger Fork were honored, but newcomers also made their debut. For the second year in a row, Mola earned a well-deserved spot on the shortlist and invited us to try their award-winning menu. 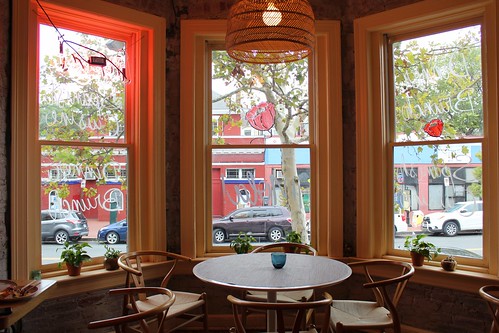 The Spanish-themed restaurant is co-owned by two women, Micky and her business partner Erin. They work diligently to source their ingredients from local farms and intentionally hand-selected a portion of their diverse wine selection from women-owned wineries. On top of all of that, their wonderful culinary team is led by a female executive chef. So, it’s basically International Women’s Day every day at Mola!

I ventured to their Mount Pleasant spot to start my Sunday funday right with my trusty brunch pal, Adam. Reservations at Mola are a must. The spot is cozy, intimate, and welcoming. However, it comfortably seats only 38. That’s not a bad thing, though! In fact, it allows Micky to spend one-on-one time with each patron, which is a detail we appreciated. 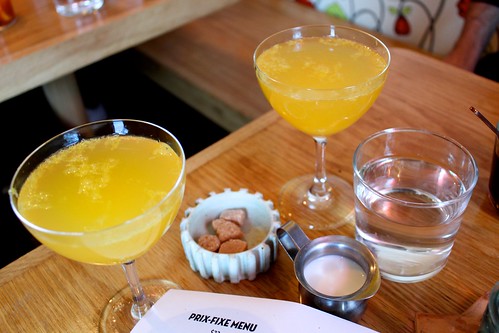 After drinking a much-needed cup of coffee, we were served mimosas with fresh-squeezed orange juice and dry Curaçao. As a fan of pulp, I was delighted they were serving fresh-squeezed. It made the Champagne taste that much more potent and the addition of the Curaçao brought out bright citrus flavors along with a slightly bitter aftertaste. 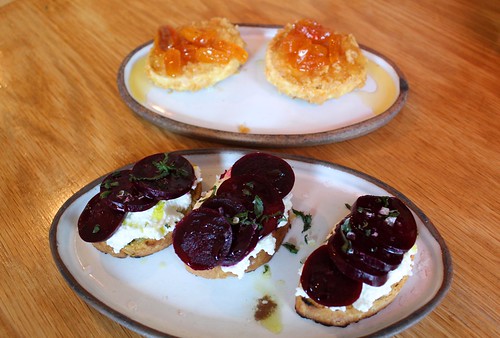 Micky offered to send out some of their popular brunch platters. First – the beet toast with house-made ricotta, mint, and fried goat cheese with orange-blossom honey and dried plums. As someone who is usually reluctant to eat beets, I was shocked that I absolutely loved it! The ricotta was fresh, tart, and proportionately smeared across the bread, and enough beets are placed on top that you get a taste of the vegetable with each bite. A conservative drizzle of oil atop was enough not to distract from the star of the plate.

Our second appetizer was just as delightful. Thick slices of delicately fried goat cheese are topped with house-made marmalade that could almost pass as dessert. Simple but rich, savory flavors combined to wake our palates in the most delicious way. We loved how the cheese didn’t come apart as we pierced it with our forks. 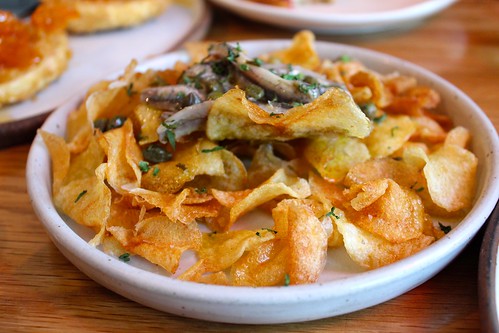 Before we moved onto our main dishes, we were treated to another starter: cured anchovies in herb oil and sherry vinegar atop delicately fried potato crisps. I’d never had anchovies that weren’t previously blended (think Caesar salad dressing), but once again, I was nothing short of impressed. Because the anchovies and capers are salty on their own, there was no need to season the chips, which were golden brown and slightly over-fried, rendering them crispier than normal. Everything came together perfectly and it was the true definition of an appetizer: we were left satisfied but still hungry for more and ready for the star of the afternoon. 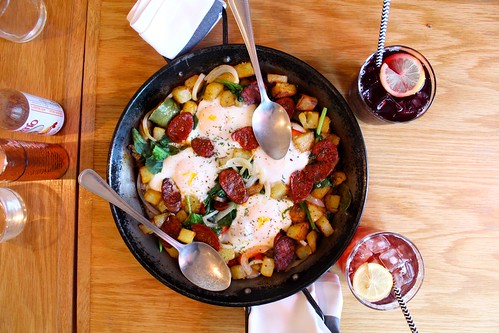 Huevos rotos arrived next, comprised of four eggs broken over a mix of potatoes, onions, peppers and chorizo. The bright colors first caught my eye, then the thoughtful placement of each ingredient. We had also just been served our second round of cocktails: tinto de verano for Adam and vermouth and soda for yours truly. A blend of red wine and limonata, the tinto reminded us of a modest sangria and was a perfect accompaniment to our huevos rotos. I loved my vermouth and soda, which is Capitoline rosé, soda and a guindilla pepper. It was smart to use a drier rosé as the base: the soda complemented the flavor instead of adding sweetness. 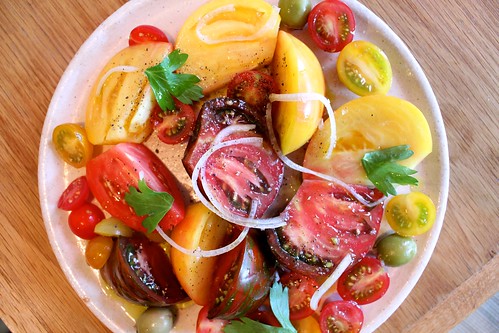 Given how heavy our huevos rotos were, a side of locally grown heirloom tomatoes was a fine balance. Again, we remarked how visually stunning the plate was. It didn’t need fancy toppings to make it memorable, just olive oil and sea salt. Each tomato was ripe in its own regard and when doused in runny eggs or eaten in the same bite as the chorizo, allowed for creativity without compromising the quality of each ingredient. 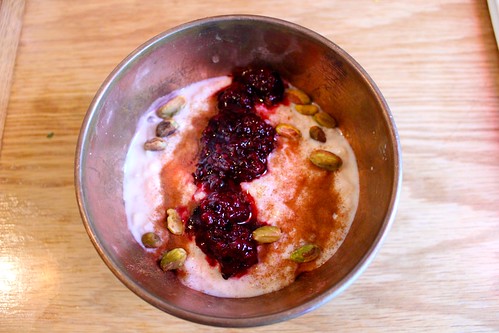 Dessert arrived in a small, yet passable bowl for two and yup, it was lovely. Rice pudding with blackberry compote and pistachios topped with cinnamon was rich and each bite was full of decadence. The blackberries were sweet, but not too sweet that it overpowered how toasty the pistachios were. The things we ordered might sound filling, but in reality they were anything but. This truly shows how skillfully the culinary team manipulates the ingredients.

There’s a reason why Mola earned back-to-back mentions on D.C.’s Bib Gourmand list, and we would be remiss not to salute Micky, Erin, and their supportive team of female superstars!