We were due for a girls catch-up, so we opted to try one of the many new restaurants at the Wharf. We were initially skeptical of the Wharf, but now that the weather is warm and the concerts are playing, the Wharf is packed on the weekends. New York Chef Roberto Santibañez brings a little fiesta to the new development with Mi Vida. Like most of the restaurants in this new development on the Southwest Waterfront, Mi Vida is a huge, light-filled space with great views. Mi Vida boasts three levels, two private or semi-private event spaces, two waterside patios, and a balcony that overlooks the Wharf. 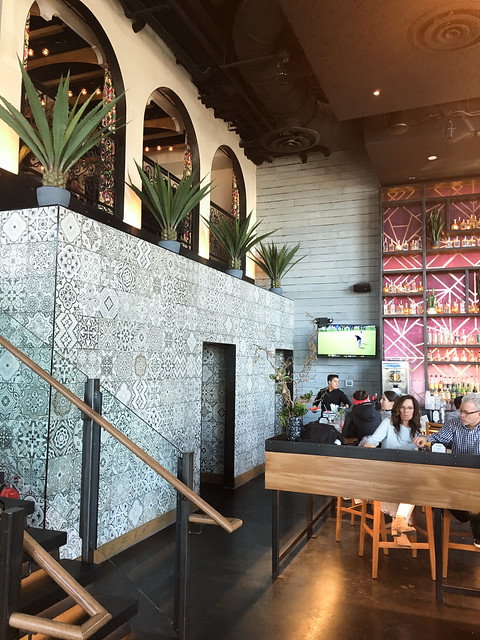 Mi Vida comes to Washington from the same hospitality group as Succotash, which received one of our Best Brunch Awards of 2017. It’s a beautiful restaurant build-out, with bright splashes of orange and warm tones. The decor varies quite a bit, with each level and space inspired by a different period in Mexican history, but remains elegant and modern. 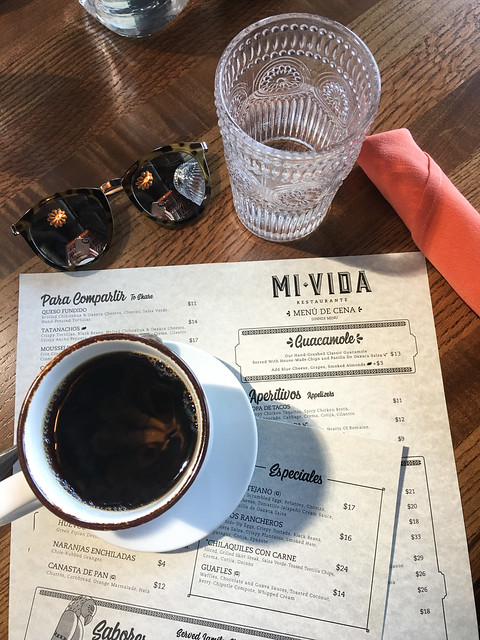 We began with tropical cocktails, which were too fun to pass up.  For Annie, the Guavini, a bellini but with guava. It was light and sweet, and a great change of pace from our usual run of mimosas and Bellinis. For Cori Sue, a Piñada, served in a pineapple glass with a tropical umbrella, as all cocktails should be served. It was crafted with El Jimador Silver tequila, Kalani coconut, pineapple, and mint, like a deconstructed piña colada. This cocktail was very strong, and very sweet. It will definitely put you under the table if you drink it too fast. 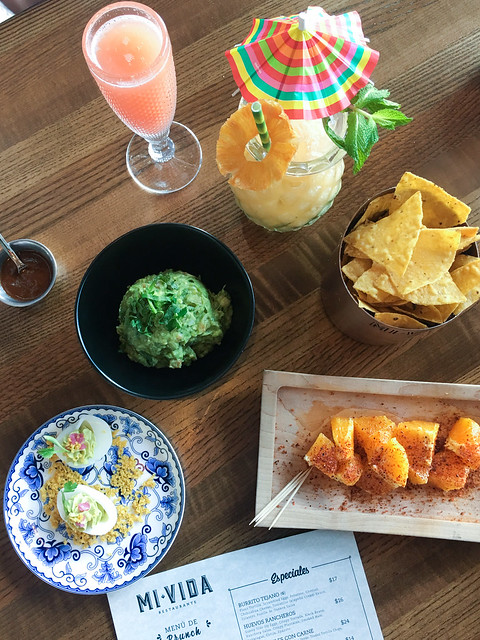 To go with our cocktails we had to sample the guacamole, which actually was a highlight of the meal. The guacamole was fantastic—hand-crushed guac, so fresh, flavorful and delicious. The house-made chips were oh-so-salty and perfectly crispy, and we loved the smoky Pasilla De Oaxaca salsa. The other starter was the Narajas Enchiladas, which are not enchiladas at all, but actually slices of oranges rubbed in chili and served with toothpicks. This was such a simple, but delicious start to the meal. We finished them off and made a mental note to try this at home. 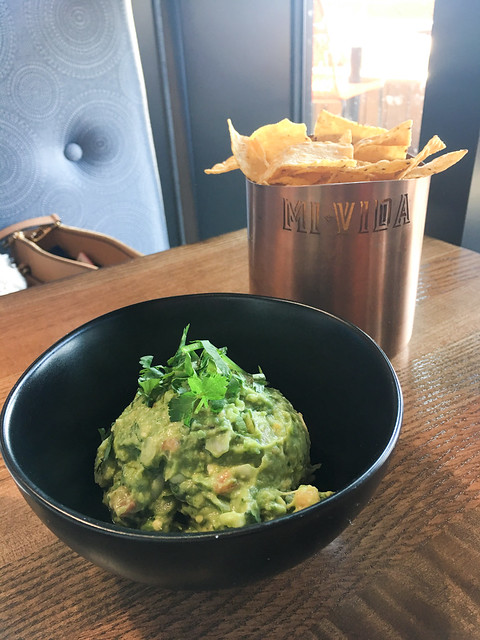 The brunch menu is concise but inventive, and you can also order off the lunch/dinner menu. We ordered the Huevos Rellenos, which were deviled eggs with spicy green chilis. When enjoying a Mexican brunch, Chilaquiles are a must. This dish was served the way you would expect: grilled skirt steak, atop tossed tortilla chips, with salsa verde, crema, cotija cheese, and onions.

We had more guava, with the Guaffles, which are waffles with chocolate and guava sauces, toasted coconut, berry-chili compote, whipped cream. I had no idea what to expect, but we took a risk. And we’re glad we did. These waffles were perfectly cooked, and topped with a fascinating flavor profile.

Because we’re bougie, we shared some of the more frivolous and fancy appetizers off the lunch and dinner menu. First, the Gorditas de caviar, which were effectively Mexican caviar blinis. The pancakes were made of potato and corn, topped with cream, red onion, and caviar. We loved the creative appetizer, but the pancakes were too soggy. The flavor profile left us feeling like we’d tried to make latkes with lox at home. It was a miss. 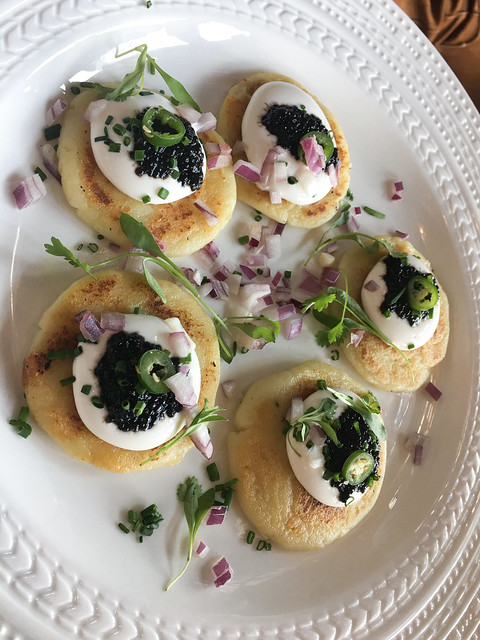 The second fancy pants appetizer was the foie gras churros—because there is no way we’re seeing that on the menu and not placing an order. The churros were the classic variety—fried and coated in cinnamon sugar. The foie gras was served in a mason jar topped with a layer of white chocolate—you slathered the foie gras onto the churros with a fork. 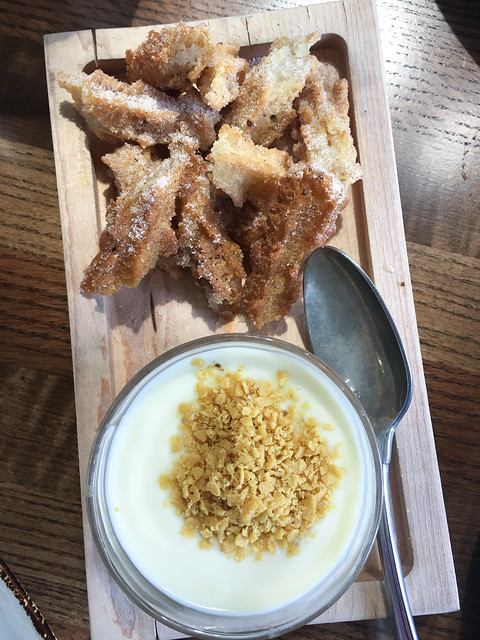 We shared a pretty standard run of entrees from the dinner menu: the tuna ceviche and the carne tacos. The carne tacos were served in a classic style: skirt steak, onion, cilantro, and spicy salsa roja. They were average–pretty dry, but that’s not uncommon for skirt steak tacos. 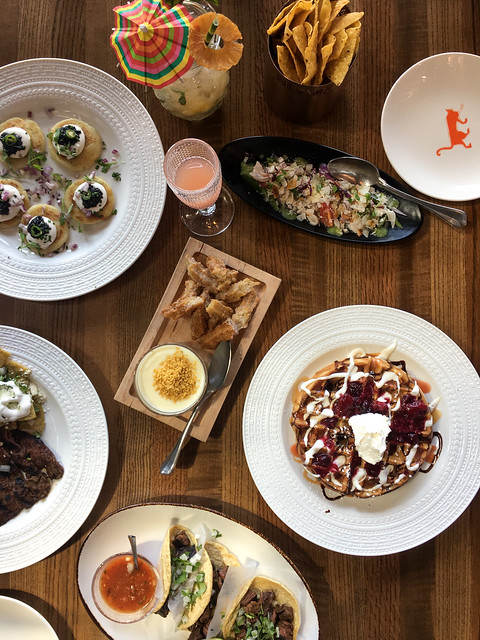 Meanwhile, the tuna ceviche was served with orange, avocado, tomato, and cilantro in a Chipotle-orange marmalade. It was a unique take on tuna ceviche, which we appreciated after ordering it regularly over the last decade. That said, the fish could have been more fresh.

Our server was a fierce, fabulous female who was attentive, energetic, and detailed in her descriptions of the menu and the experience. She was a most welcome addition to our brunch experience—everyone in the busy, bustling restaurant knew what they were doing. 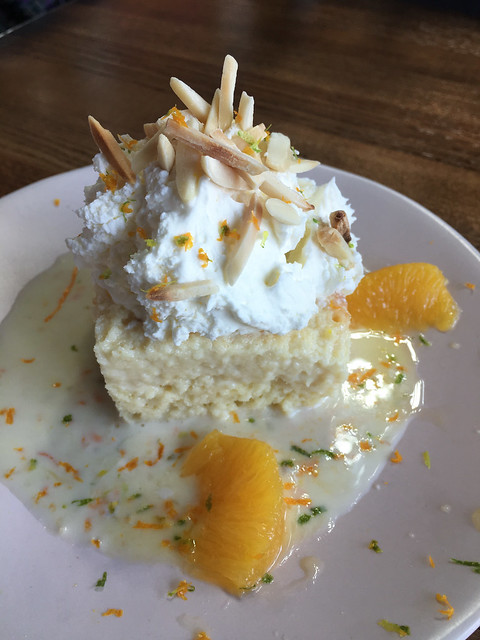 The Bitches say: B. A gorgeous space, killer brunch cocktails, and an inventive menu. There are a few misses on the menu, however, we loved the chips and guacamole, but overall found the quality of ingredients in the dishes to be sub-optimal.