Ahh, Sunday Funday. Most weekends, Sundays include a low-key brunch and then scrambling to complete errands that I couldn’t do during the week. But every once in awhile, Sunday can turn into an extreme brunch and booze fest, if I can spend the rest of the day relaxing.

Chris and I invited my sister, Ashley, and her two guy friends to join us for Brunch at MAD Social in the West Loop. We arrived around noon and kindly asked the hostess for the table up front by the windows in direct sun. 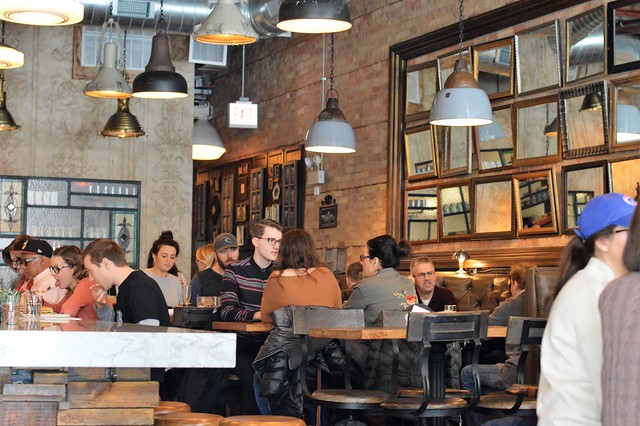 MAD Social is a new restaurant in the Phil Stefani Signature Restaurant group and was opened by Phil’s daughter. The menu, under Executive Chef Mariela Bolaños, features new-American dishes. The brunch menu has a variety of offerings that excited everyone in our group. Also, Ashley and I were pleased to be eating at a spot that is run by some serious boss Bitches—girl power! 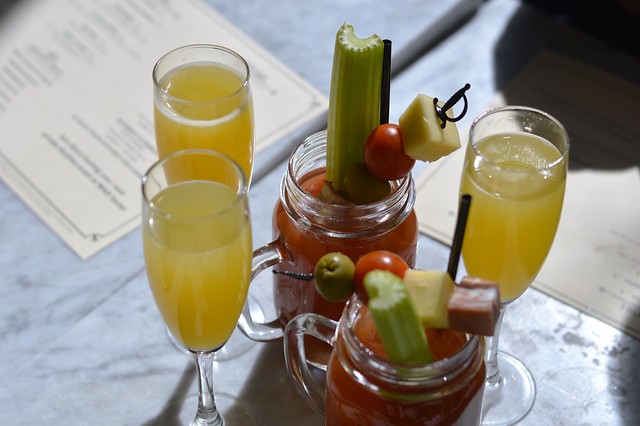 While we opted to make this brunch a boozy one, it wasn’t to an extreme. As Ashley, Chris, and I ordered some classic mimosas, our server informed us that the restaurant has a bottomless option for $25. Ashley and I weren’t looking to get too crazy, so we just decided to order one at a time. The other gentlemen ordered Bloody Marys and Bloody Marias.

Being the crazy brunch lady I am, I informed everyone that there can be no repeat orders. Thankfully, everyone had eyed something different from the next person, and we had a variety of dishes around the table. 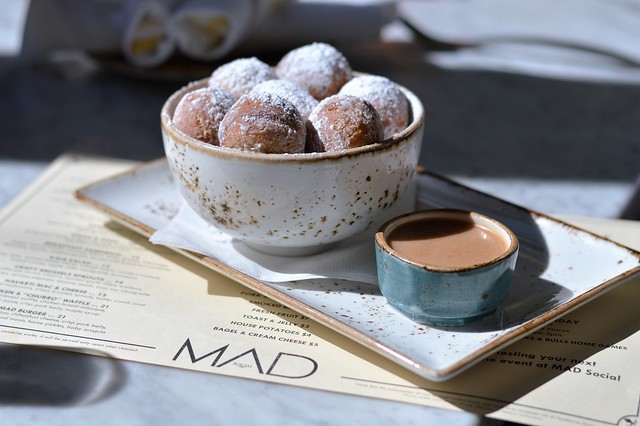 We started with doughnuts to share. The doughnuts came out hot and were accompanied by a caramel dipping sauce. They were super yummy and we all really loved the dipping sauce—it was a nice additional touch. When the busboy came to remove the plate of doughnuts, we made sure that keep the remaining sauce at the table for later. 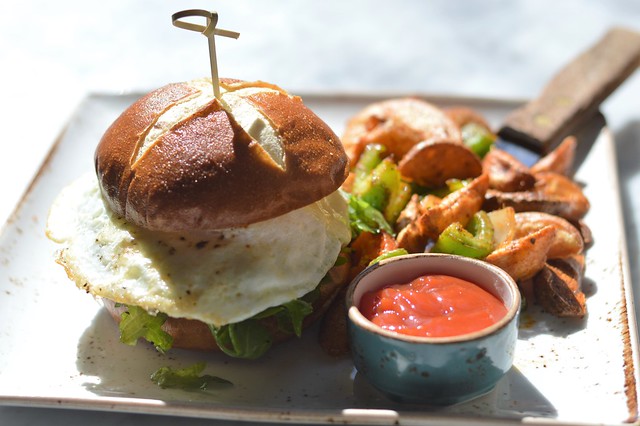 For entrees, Chris went with the breakfast sandwich, something that was a newer breakfast item according to our server. It came on a pretzel bun and had a fried egg, chicken sausage, and a spicy red sauce on the side to accompany the breakfast potatoes. Chris ate the sandwich really fast but couldn’t help but note how salty the dish was, in addition to it being super messy. He loved the breakfast potatoes. 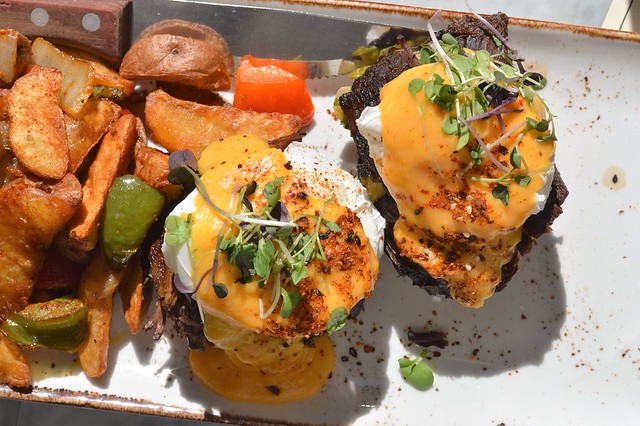 My sister’s boyfriend, Eric, went with the short rib Benedict made with braised Korean style short ribs, toasted pretzel buns, Brussels sprouts kimchi, togarashi Hollandaise, and house potatoes. He absolutely loved this dish. Even my sister, who isn’t much of a meat eater, really enjoyed this dish. It was packed with flavor and all of the components worked really well together. 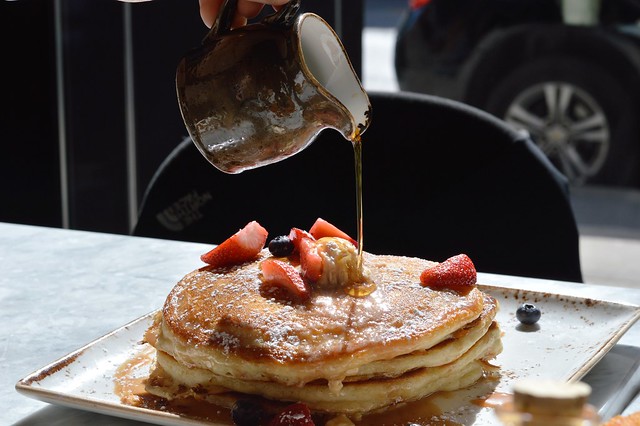 Ashley went with something sweet as she typically does, and opted for the buttermilk pancakes, with salted caramel whipped butter, fresh berries, and maple syrup. These were perfectly browned pancakes, and tasted delicious, but to no surprise they were plain. We all agreed that her dish was nothing special, as the pancakes were something that could be recreated in our own kitchen.

Rob and I had originally both wanted the chicken and waffles, but after some some serious negotiating we finally agreed to order two items that we both had been eyeing and split them; win-win! 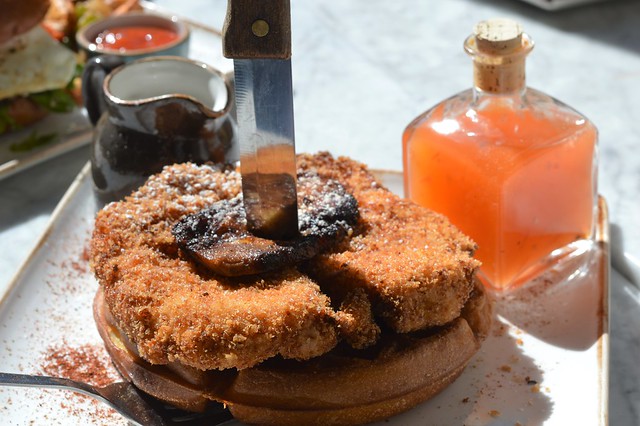 I ordered the chicken and waffles, and let me tell you, this dish was fantastic. It is only March but I have had some seriously good chicken and waffles this year! The chicken breast was Milanese-style and fried to a crispy golden brown. It came on a churro waffle, and was topped with a crispy pork belly. Maple syrup and a MAD hot sauce were served on the side, and they both rounded out the dish nicely. The hot sauce was awesome. 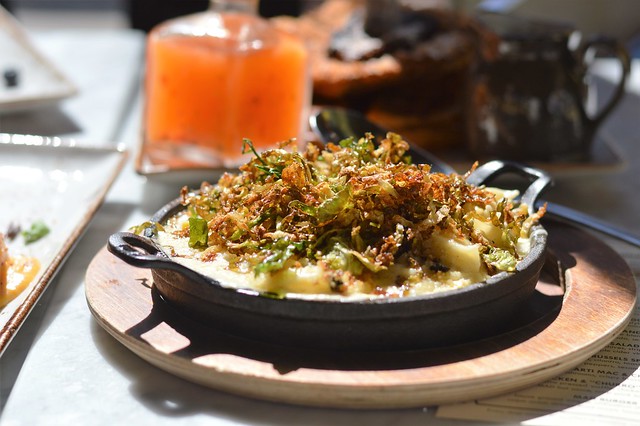 Rob ordered the Havarti mac and cheese, and bite after bite, he kept commenting on how good it was. After I finally got to try, I instantly agreed with him.

This is no ordinary mac and cheese, as it is composed of sweet corn, wild mushrooms, crispy Brussels sprouts, and comes with butter crumb crust. It was utterly creamy and all of the ingredients worked really well together. The cheese sauce was top notch, and we were not at all surprised to find out from our server that it had won a mac and cheese contest in the city sometime ago. 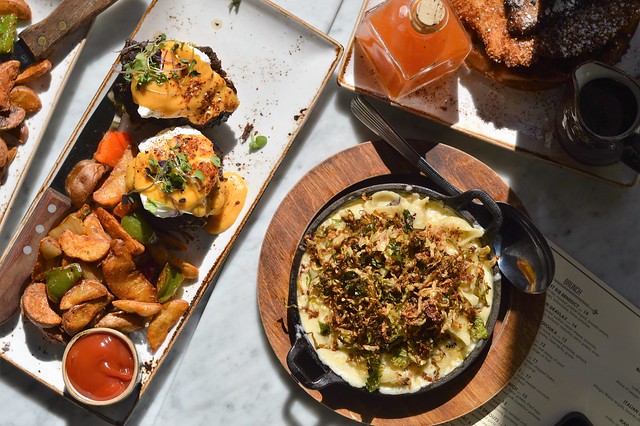 I should mention that I came to MAD Social with the intent of ordering a dish that I had come to understand was the restaurant’s signature brunch dish, thanks to Instagram; the Monte Cristo sandwich. I was spared potentially suffering from a heart attack when I was informed that it was no longer on the menu. Truth-be-told I was quite pleased, as it didn’t really sound like my cup of tea, but I am always eager to try a restaurant’s signature dish.

The Bitches Say: B. MAD Social was the perfect spot to brunch and booze with friends, as it provides a really fun atmosphere and some awesome brunch items that will please everyone in your group.

MAD Social serves weekend brunch on Saturdays and Sundays from 10 a.m. until 3 p.m.