I frequently drive through the intersection where Lucy’s is located in Dorchester. I’ve driven through this intersection so many times that I actually remember when it was a Blockbuster Video store! I have been in before for dinner and drinks but had never visited on a weekend morning for brunch. 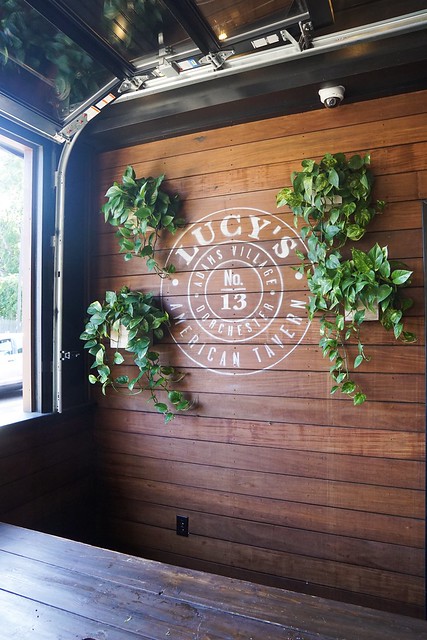 Lucy’s is a large space with a modern, rustic vibe. The tables are made of stained wood, and there are decorative wooden barrels and an accent wall of exposed brick. The restaurant is large and seating varies from booths, high tops, and plenty of stools at the bar. Lucy’s name was inspired by Lucy Stone, a pioneering resident of Dorchester in the 1800s. 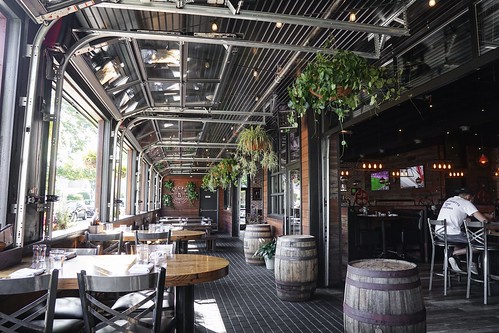 I visited Lucy’s on a Saturday morning and chose a seat next to the large open windows. The restaurant had just opened, so it was quiet. While seated at the hightop, I decided on a spiked iced coffee and then ordered a nitro cold brew for Richie with an added shot of whiskey. My boyfriend is not a fan of coffee, but honestly, the second one was mostly for me anyway. I needed a double dose this morning in particular! Lucy’s splits the brunch menu into breakfast options and lunch options, making it easy to choose something sweet or savory. 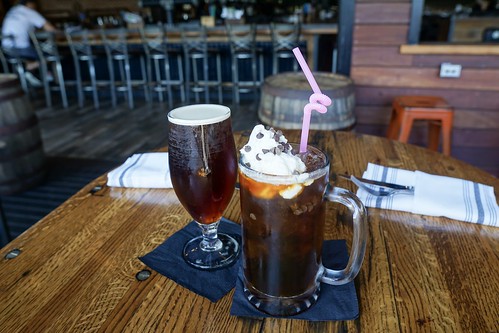 If you have read any of my other reviews, you will know by now that I always order something sweet and something savory. I was set on the French toast sticks until our waitress informed us that they were, unfortunately, all out. I pivoted my sweet choice to the Funfetti pancakes. I enjoyed my spiked iced coffee and Richie actually took a couple of sips of the cold brew. I’ll take spiked caffeine over a mimosa any day, and while we waited for our appetizer I started to wake up and more tables started to fill. 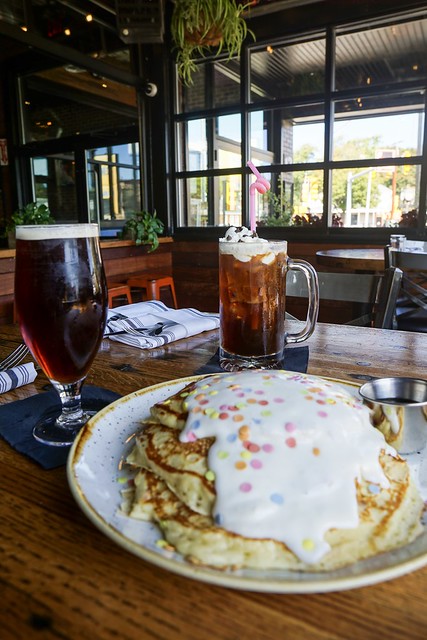 The Funfetti pancake arrived with the fried pickles that I impulsively ordered while waiting. A strange combination… I know. There were three large pancakes stacked on top of each other, covered with a cream cheese glaze and some Funfetti sprinkles. Richie could probably use an entire bottle of maple syrup in one sitting, so I let him do the honor of pouring it all over the pancakes. The pancakes had a familiar taste, and there was not a strong “Funfetti flavor,” but the icing made them super sweet. I had to dive into the pickles, and although I was still a bit disappointed without a serving of French toast sticks on the table, the pickles made up for it.

Lightly battered and served with spicy dill aioli, the Fatman fried pickles were – in a word – perfect. I can’t lie, I have had these during dinner in the past, but they never disappoint and I needed to refresh my memory. They are fried, but they are just pickles so they are healthy, right? Sure. 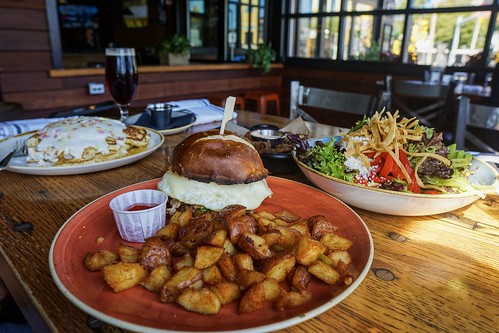 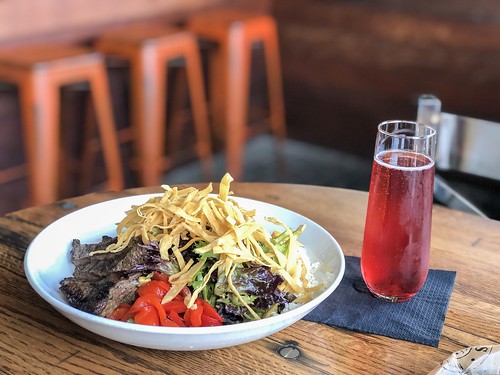 I ordered a steak and avocado salad from the “…unch”  side of the menu to offset the abundance of carbs I have been indulging in lately, and Richie chose the bbq brunch sammy. I also had my eye on the Mexican street nachos, but after eating almost all of my fried pickles there was no way I was going to be able to eat more than two of them. The salad was stacked with marinated flank steak, baby salad greens, crispy tortilla sticks, avocado, and more. There was a light refreshing dressing covering the salad and the variety of toppings that checked all the boxes: protein, healthy fats, some crunch, and some color. I ordered a pomegranate mimosa to sip while enjoying my meal. 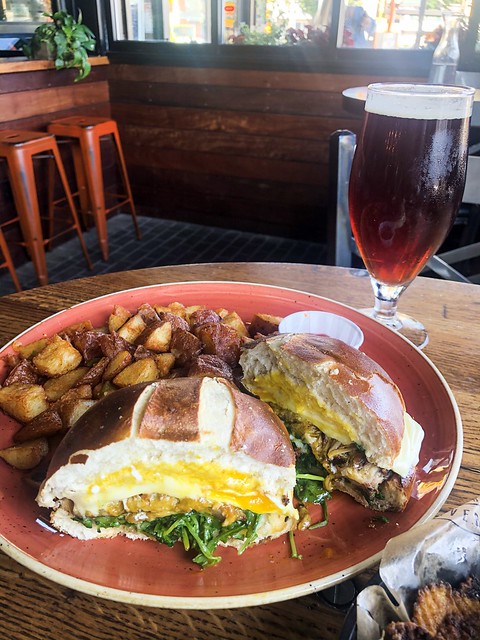 The bbq brunch sammy was complete with smoked pulled pork, a fried egg, cheese, and a pretzel bun. This was filling and flavorful. The smoked pulled pork was juicy, and the pretzel bun was a great firm base. I was only allowed a couple of bites (two bites to be exact), but Richie didn’t put it down to take a breath. The sandwich was served with crispy home fries, and I can envision ordering this to go and skipping a sad coffee shop microwaved sandwich. 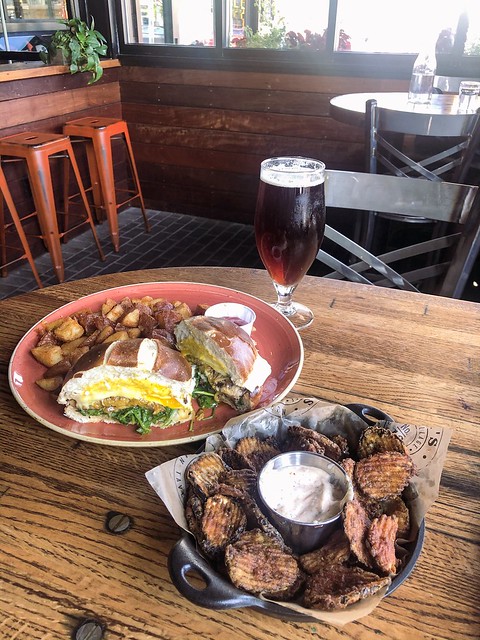 Lucy’s is a great location for a neighborhood brunch, large groups, or a family meal. It also has the space to hold all the energy of loyal Patriots fans every Sunday.