“Hey Tim, what are doing around brunch time tomorrow?”

“Wanna go to Longman and Eagle for brunch? You’ll be in a Bitches brunch review”

I’ve known Tim for quite some time now—give or take 13 years. But we really became friends when I moved to Chicago in early 2015.

When I moved here, I reached out to Tim immediately and he graciously welcomed me to the big, bad city and we have consistently hung out ever since. 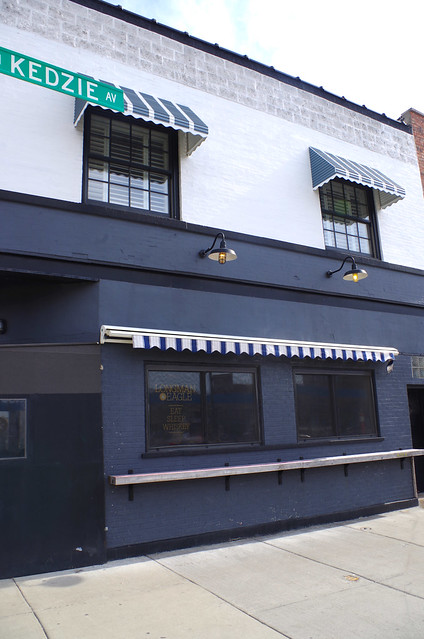 It had been a couple months since I had seen Tim, so I knew that when I wanted to go to Longman and Eagle, he was the perfect person to reach out to and to be my brunching buddy. 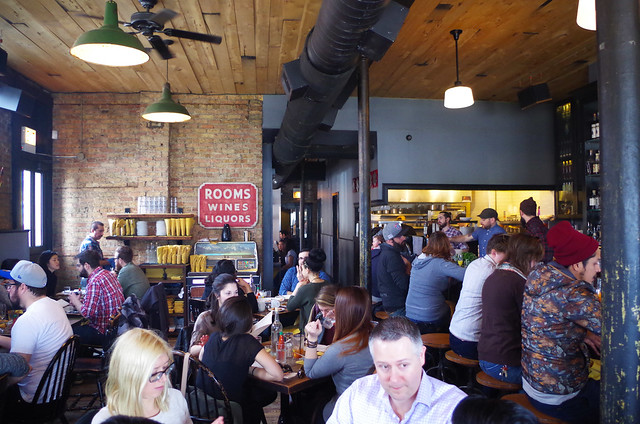 Mornings are rough for me—I’ll be a night owl until the day I die, so per usual, I was running late and our hopeful 10:30 a.m. brunch turned into an 11:30 a.m. brunch. I was annoyed at myself because I knew if I was tardy, I was going to pay for it in the form of the dreaded waitlist.

Tim and I arrived around 11:30 a.m. on Sunday and we met with a 45 minute wait—something we anticipated but is nonetheless mildly annoying. But, we swallowed our annoyance since it was inevitable and decided to get drinks in the Off-Site Bar at the back of the restaurant. 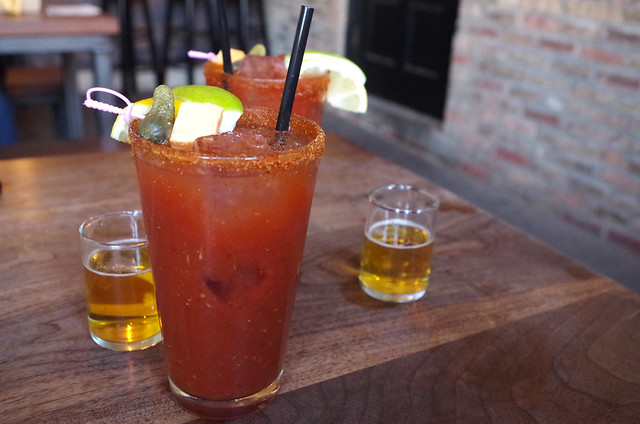 Bloody Marys were calling our names and definitely helped pass the time. The Bloody Marys in the Off-Site Bar weren’t the most extravagant presentation that I had ever seen, but the mix of tomato puree, spices, and vodka was perfect. What caught Tim’s attention was the use of Old Bay seasoning on the rim of the glass. Being from Maryland, Old Bay is in Tim’s Blood and gave him a significant throwback.

The Off-Site Bar is furnished with large communal tables so Tim and I found a spot and chatted the time away.

Before we were even finished with our Bloodies, the wait was over Tim and I were led to our table in the main dining room to finally dine for this long-anticipated brunch.

Our waiter wasted no time in introducing himself and taking our orders. I anticipate that most of the time, waiters figure the patrons have been waiting some time for a table and have already decided what they were going to eat before they’re seated—our waiter was half correct in this assumption with us.

Tim hadn’t decided what he was going to get before we got to Longman and Eagle, but I had done my research before arriving so I knew what my game-time decision before the game began! 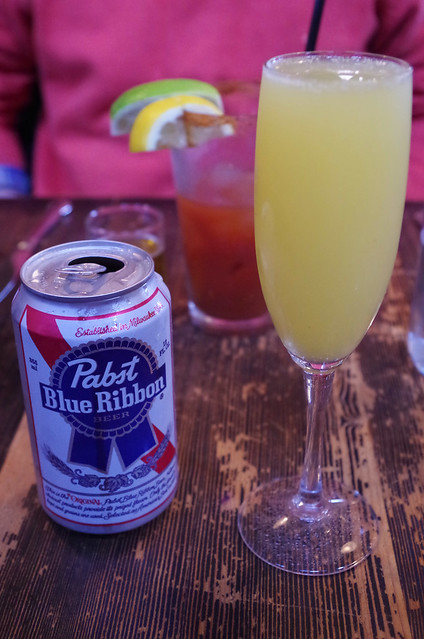 Thankfully, Tim decided quickly and chose the PBR breakfast— the ”breakfast of champions” he deemed it. The PBR breakfast included scrambled eggs, potatoes, bacon, and of course, a PBR. Not a bad combo! 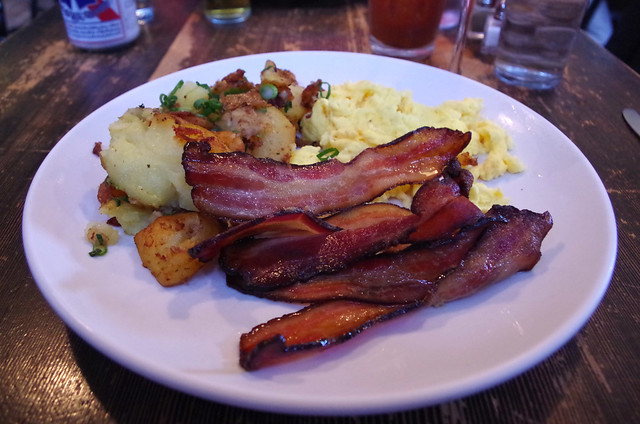 Tim really enjoyed his meal saying that while it wasn’t the fanciest, every part of it was delicious. At one point he took a bite of bacon and exclaimed “this is awesome bacon!” If that’s any indication on whether or not he enjoyed his meal (or the bacon), then I don’t know what is. 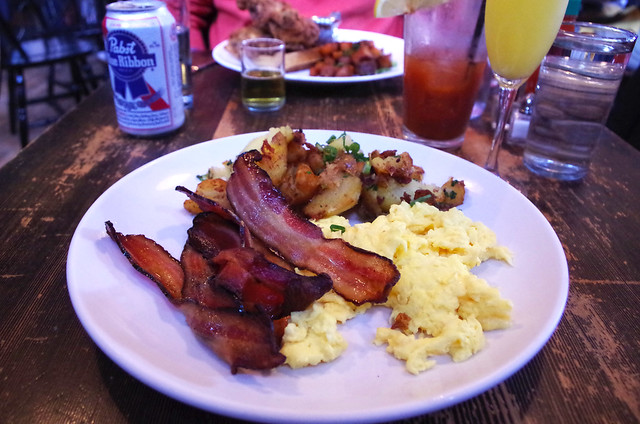 Before arriving, I toyed with the idea of getting something eccentric—if you go to a long standing Michelin rated restaurant, it’s pretty safe whatever you get is going to be great. But I played it safe, but still went outside my box and got the chicken and waffles. 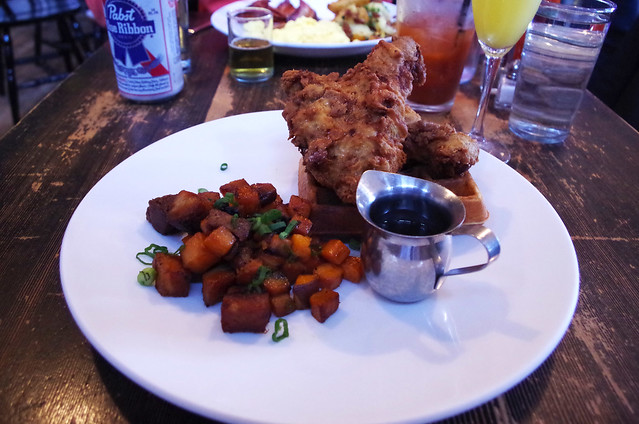 I have to say, this was the best chicken and waffles I’ve ever eaten. The waffle was spongy and warm. My usual complaint with waffles is that they are dry, but this waffle was perfectly soft and had hints of vanilla. The fried chicken was perfectly cooked and there was quite a bit of it—a whole chicken thigh and drumstick. If anything, I wish there was slightly more waffle, or slightly less chicken to have it be more proportionate but beyond that, it was perfect. The side of sweet potato with pork belly cubes was a wonderful compliment to the waffle and chicken. 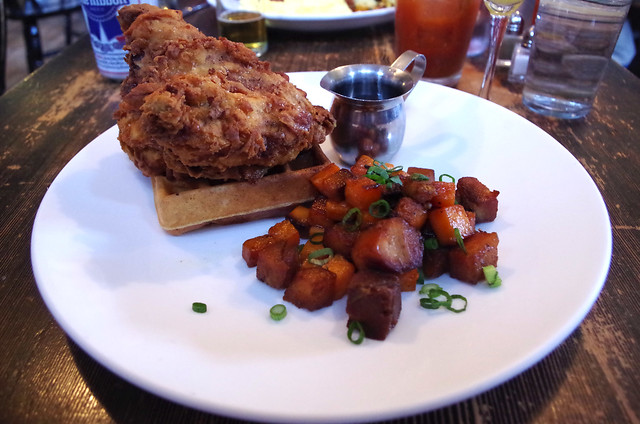 Longman and Eagle is absolutely a spot worth the wait, and lives up to the hype. It’s a simple dining spot that leaves all the talking to be done by the amazing food.

The Bitches say: A. Longman and Eagle has been cool before Logan Square was, and has kept that reputation by continuing to create great food, keeping the operation small, and not leaving even the smallest detail unfinished.