If you’re looking for a decadent, boozy brunch on the beach, look no further than the Lobster Bar Sea Grille. This seafood spot recently launched its three-course, bottomless prix fixe brunch offerings. The  mainstay’s new morning (read: afternoon) meal is undiscovered as of yet, as the expansive restaurant was nearly empty when we arrived. 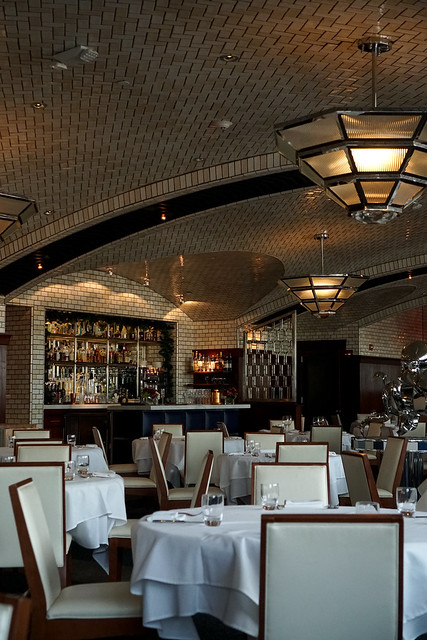 Located in South Beach, the Lobster Bar Sea Grille is a massive, upscale restaurant with waiters in white tuxedos. They may take themselves just a bit too seriously, but, the space is classic, and it’s not without character. The art is interesting and the lobsters are fresh. The service is friendly and on-the-ball.

The brunch menu has three courses for $39, and includes endless beverages, allowing you to choose from Bloody Marys, mimosas, Bellinis, Prosecco, or Santorini Assyrtiko, a Greek white wine. We appreciate the variety of available cocktails. 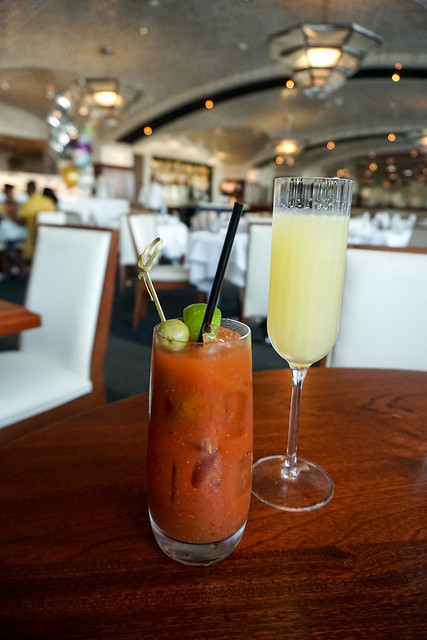 We began with water, coffees, and classic cocktails: a mimosa and a Bloody Mary. The mimosa was delightful: lovely, fresh, and bubbly—definitely the kind that brings the fear of knocking back five more. The Bloody Mary was light and smooth, with the perfect amount of spice. It was simple, served with a lime and an olive, but beautifully done.

Any meal at Lobster Bar Sea Grille must begin with the pastry plate, a gorgeous plate of house-made croissants from a highly regarded pastry chef. Hats off to the chef, as these pastries were even better than the waiter had boasted. We ordered the classic brioche, pain au chocolat, and the specialty raspberry croissant. While the presentation was just so so—it was simply a plate—the pastries were fresh as fresh can be. The croissants were accompanied by rich butter, jam, and dulce de leche, which as an Argentine I always appreciate. The brioche was just so-so but the chocolate croissant was exceptional, with ribbons of chocolate woven into the pastry. 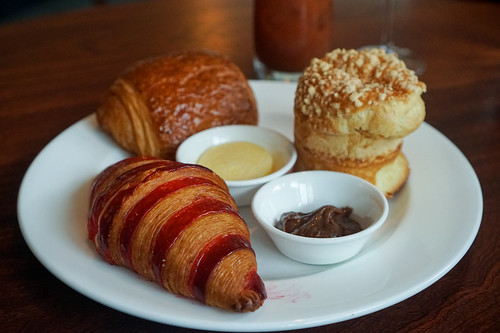 The raspberry croissant was outstanding: beautiful, streams of raspberry jam inside a fresh, buttery, flaky croissant. We’ve never seen such a pastry, and we will compare all pastries to this raspberry croissant henceforth. It is declared that this is the Bitches best croissant, worthy of the $49 bottomless brunch alone.

By way of appetizers, you may choose between salads, crispy thin French tartes (mushroom or salmon), lobster bisque, tuna tartare, or grilled octopus. As a proud Greek-Australian, my boyfriend ordered the Mediterranean grilled octopus, which was served char-grilled with pickled red onion, Santorini capers, and Greek olives. We appreciated the presentation and the homage to Greek island cuisine. He devoured it before I could snap a solid photo. 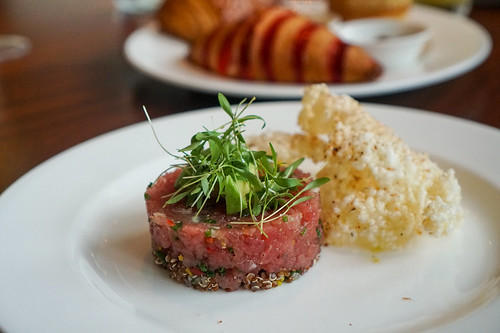 The tuna tartare was served with avocado, arugula, and fresno chili atop a bed of quinoa. I truly dislike quinoa, so I begrudgingly picked around it. The fish on both appetizers was fine, but not exceptionally fresh or high-quality.

The lobster-centric entrée options include a lobster roll, a whole lobster-stuffed lobster, crab cake eggs Benedict, and more. We both selected lobster entrees, as it seemed the appropriate thing to do (when in Rome, you know). The chili lobster toast was basically a spicy lobster eggs Benedict with thick fluffy pieces of bread, loads of fresh chunks of lobster meat, poached eggs, and shishito peppers. The entire plate was covered in a creole-style spicy red sauce that was packed with flavor. 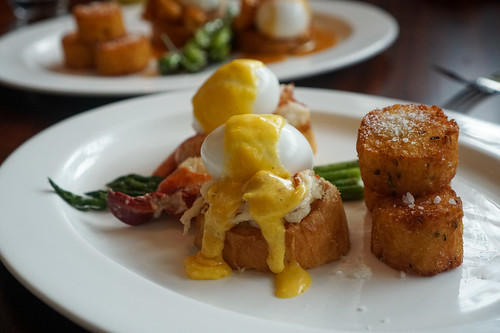 The lobster eggs Benny was absolutely beautiful: fluffy, grilled rounds of white bread, loads of lobster, poached eggs, and a classic Hollandaise. It was served with asparagus and hash browns. The Hollandaise and eggs were just so-so, but the lobster was delicious, and there was a lot of it.

Both entrees came with delicious hash brown patties that were crispy on the outside and filled with moist boiled potatoes inside. Basically an elevated take on the McDonalds hash browns with some sea salt and parsley. Utterly delicious. 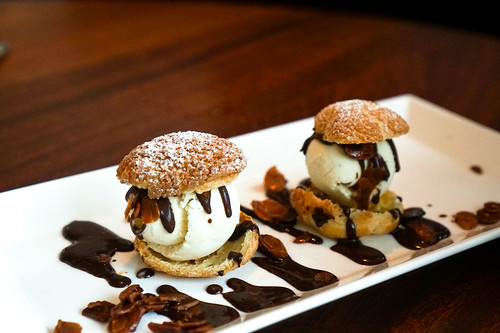 The Lobster Bar Sea Grille has a bit of a stuffy ambiance and pretty average sourcing of ingredients. Its vegetables and eggs lacked flavor and freshness — that a discerning palate will notice. However, the bottomless deal, exceptional house-made pastries, and generous portions of lobster make it worth a visit. This would be a great option for a birthday celebration, holiday brunch, or a meal with friends.

The Bitches say: four Champagne flutes for gourmet pastries, a killer bottomless deal, and generous portions of lobster everything.