Alexandria doesn’t get enough credit for being a brunch neighborhood. When you’re competing with the likes of D.C. and arguably Arlington, the quaint city can often be overlooked as a hub to enjoy a great eggs Benny or house-made Bloody Mary. Live Oak is here to change that narrative and they have a pretty delicious argument to do so. 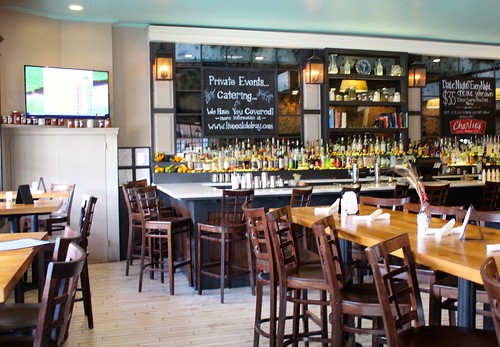 My friend Krista and I descended onto the southern-inspired Del Ray restaurant after receiving an invite to try their menu. We were greeted by our server Bret, who also acted as our bartender for the afternoon. After a quick glance at the spread, I soon got the impression this was a place bursting with creativity. You wouldn’t find your standard mimosa here; instead, seasonal specialties crafted with local spirits highlighted an already impressive list. Krista started off with the Tito’s cranberry spiced mule and I opted for the sour (pear). 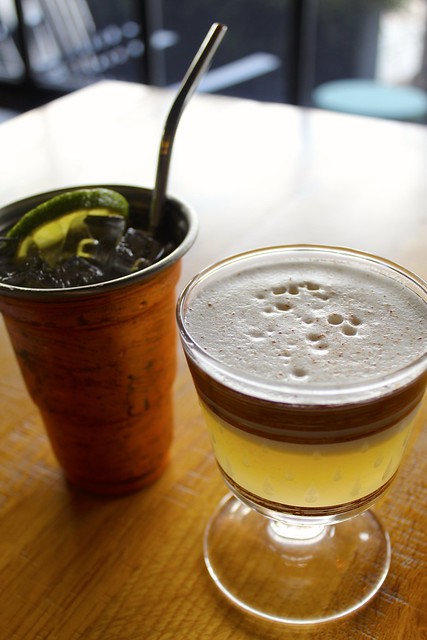 A combination of vodka, cranberry shrub, dry vermouth, orange bitters, and ginger beer, it’s by far the best attempt I’ve seen of a rendition for the standard Moscow mule. Each flavor is prominent without necessarily overpowering one another. Even if you’re normally averse to dry vermouth like I am, you’ll still want to order a second round.

The Sour was equally as tasty. Vodka, pear shrub, lemon, bitters, and egg white come together to deliver one of the most upscale brunch drinks I’ve ever tasted. It’s lightly acidic thanks to the pear shrub, but the lemon and the foamy egg whites balance the overall flavors out. 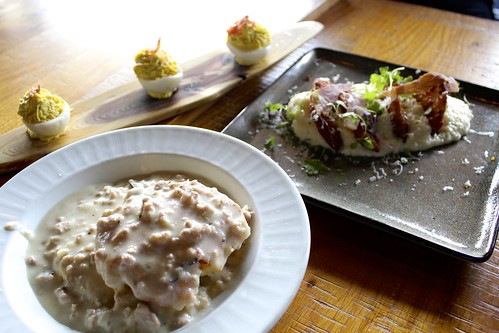 Bret was extremely helpful in allowing us to pick some plates we wanted to sample along with others he felt were the pride and joy of the lineup. I was feeling particularly “carb-y” that day, and I instantly locked eyes with the buttermilk biscuit and sausage gravy. To round out our appetizers, Krista selected the fried green tomatoes with grits and Brett sent out deviled eggs.

As a deviled eggs aficionado, I’m pleased to report that Live Oak’s version passed with flying colors. The chili peppers were apparent, but added the right amount of heat. Texture-wise, it can be easy to butcher. However, it was perfectly creamy and offset the crunchiness of the pickles and saltiness of the ham in the best way possible.

Our fried tomatoes and grits also did not disappoint. Regardless of if you believe sugar belongs in grits, you won’t miss the controversial ingredient here. There’s plenty of flavor thanks to the liberal serving of cheddar cheese and ham. The gravy to sausage ratio was perfect for the biscuits and gravy. The biscuit was still warm, oversized, and beyond flaky. The sausage was chunky and spicy with a slightly sweet aftertaste. It was an all-encompassing delightful first course. 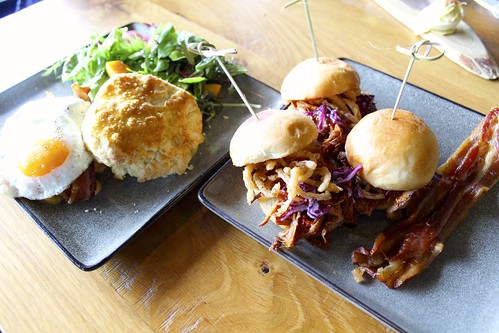 Our second course was just as hearty. Krista went with the bacon, egg, and cheese biscuit while I opted for a taste of home with some barbecue in the form of pulled pork sliders. This was the first time either of us experienced pimento cheese on a breakfast sandwich and it certainly won’t be the last. It’s a great alternative to the standard cheddar, and still retains its shape even after your first bite. The same biscuits from our appetizer made another appearance here and were even flakier then before.

I felt like my sliders were lacking enough acidity from the slaw and perhaps more sauce, but the meat was tender and the portions were just right. A salad (or some form of greens) could also accompany this dish as well. 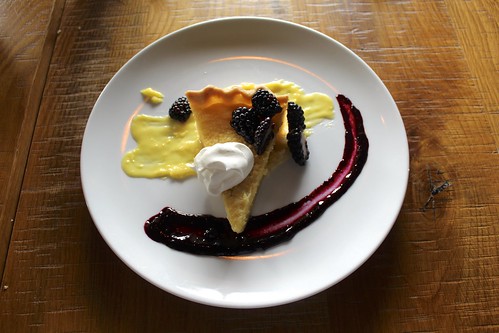 We were full, but dessert is a must when you’re dining in a southern establishment. Our final course was a buttermilk chess pie with Chantilly cream, blackberries, and lemon curd. 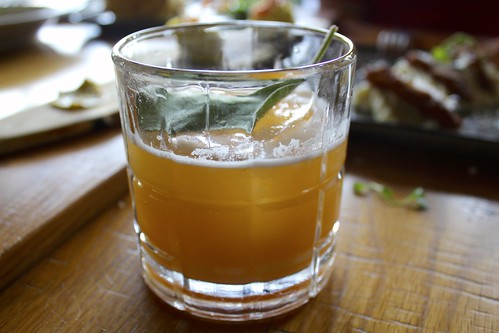 To pair alongside our pastry I ordered a “nail”, a cocktail made with scotch, sweet potato syrup, drambuie, and lemon juice. Krista switched gears on a warm libation and settled on the Owner’s Coffee: coffee moonshine, spiced whipped cream, and cinnamon. 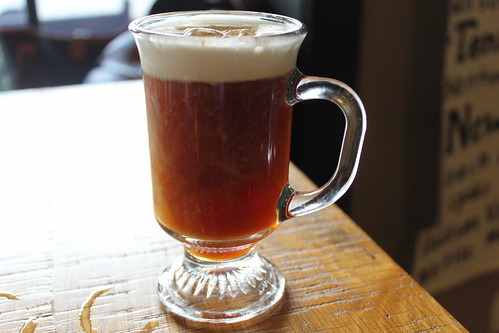 My only regret was not following Krista’s suit. I absolutely loved my drink, especially considering I’d never had sweet potato in the form of a spirit. I often feel like scotch is too strong of a base for me, however Bret found a way to make it fitting for a brunch atmosphere. Perhaps the most alluring thing about the Owner’s Coffee was the moonshine, which we were informed is supplied by a distillery based in Richmond. Normally a strictly Irish coffee enthusiast, this paired with the zesty yet creamy buttermilk pie was exactly the ending to a pleasant afternoon.

Live Oak could be the start of a brunch resurgence in Del Ray, and we’re happy to say we knew them when.

Live Oak serves brunch every Saturday and Sunday from 10 a.m. to 3 p.m.