Picture this: 70˚F weather, sunny skies, and a free Saturday afternoon. Sounds like the perfect combination, no? Add a nice brunch into the mix, and we’re really talking. Recently, HBIC Cori Sue and I got to experience such a Saturday in SoHo.

After shooting some street style in the West Village for upcoming fashion content (stay tuned for velvet and athleisure looks), we wandered around looking for the perfect place to brunch. Thanks to the aforementioned ideal Saturday situation, everyone and their mom, nanny, and pug was also out brunching as well. And since we hadn’t made a reservation anywhere—we live on the edge—we had a bit of trouble finding a place to eat.

That is until we took a turn and landed upon a greenery-covered oasis in the Little Prince in SoHo, a cozy French bistro known for its French onion burger. (We were so excited, we forgot we’ve actually brunched here before.) We bypassed the crowd hanging about outside, and we were lucky enough to walk in and get a table for two tucked away in a little corner between the bar and the outdoor patio. 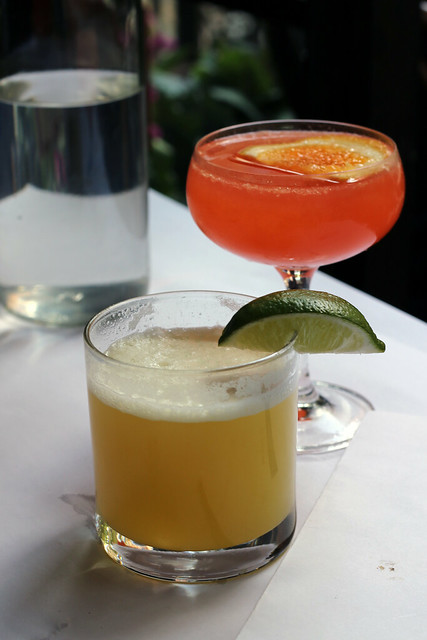 Relief at getting a table made way for cocktail thirst, and I immediately set my sight on the French Intervention—a frothy, savory, and strong mix of Tantea jalapeño tequila, pineapple, cilantro. Cori Sue went a light different route and chose the delightfully bright Cyndi Lauper—prosecco plus Campari and orange—and a latte.

This tasty trio of drinks nicely set the stage for my favorite part of the meal: the ricotta toast. Think chewy country bread topped with a delicious ricotta spread, EVOO, salt, pepper, and a swirl of sweet, sweet blueberry goodness. 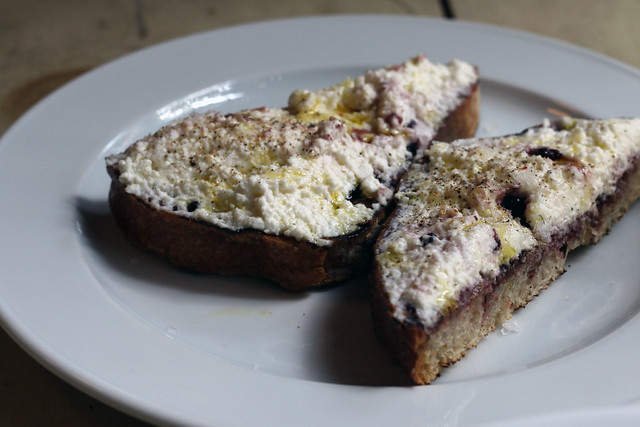 Real talk: I could have eaten a platter of these slices, and if I were one of those fancy morning people—someone who does sun salutations before the actual sunrise and who can perfectly apply a cat eye before 8 a.m.—I’d make this for myself every single day. Alas… 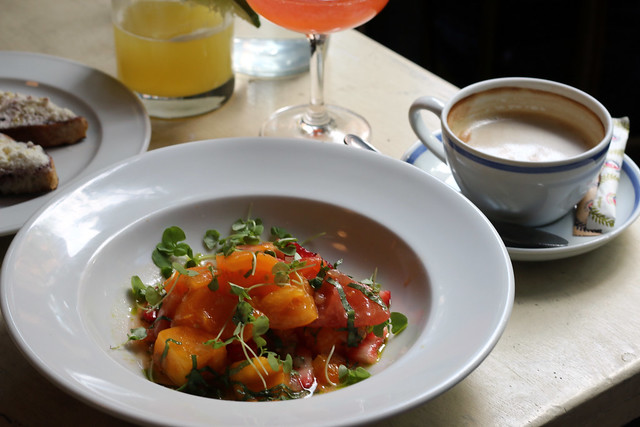 Next up, the heirloom tomato and strawberry salad served with basil and shallots. This bright and juicy salad was a nice pop of color for the table, but I thought its texture was a bit on the mushy side. It could have used an added crunch.

Speaking of texture, let’s move on to red meat. Both omnivores, Cori Sue and I love some good veg, but when it comes to entrée time, more often than not, we’ll indulge our carnivorous side.

This time around, Cori Sue chose the steak and eggs. Her medium-rare Creekstone Farms hanger steak came topped with a generous portion of chimichurri, whose herbal flavors were a good complement to the meat and the perfectly fluffy scrambled eggs (there was enough sauce to go around, clearly).

The well-rounded plate also included simple mixed greens, breakfast potatoes, and sautéed onions. (Not pictured: a side of chewy, salty bacon that we kept eating throughout the meal. It was nothing special but it was there—sort of like all my ex-boyfriends. Note to self: Do better.) 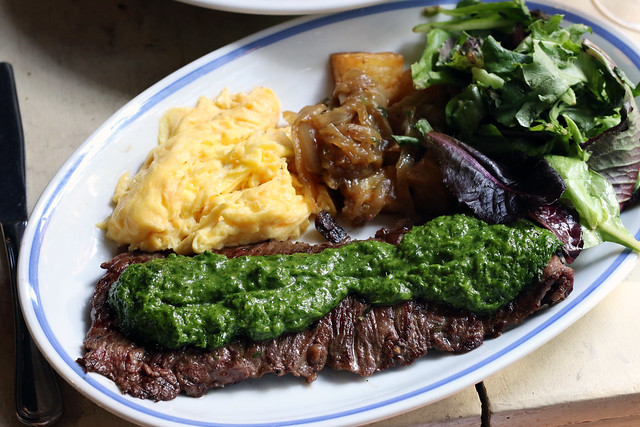 If I see a hash, I have to order it, so I knew Little Prince’s short rib hash was the one for me from the jump. Crispy shredded short rib mixed with root vegetables, kale, crispy fried eggs, possibly pecorino (I didn’t actually taste any), and my personal favorite food group—pickled onions—made for a really delicious and savory anchor to the meal.

For me, hot sauce would have added a nice spice to kick this dish up a notch, but the restaurant didn’t have any. For the second time that day, I wished  I were Beyoncé (I could have used her goddess vibes during my shoot earlier that day) with some hot sauce swag in my bag. The good news? I took what I couldn’t eat home and had it later that night—doused in a generous portion of Frank’s, I might add. 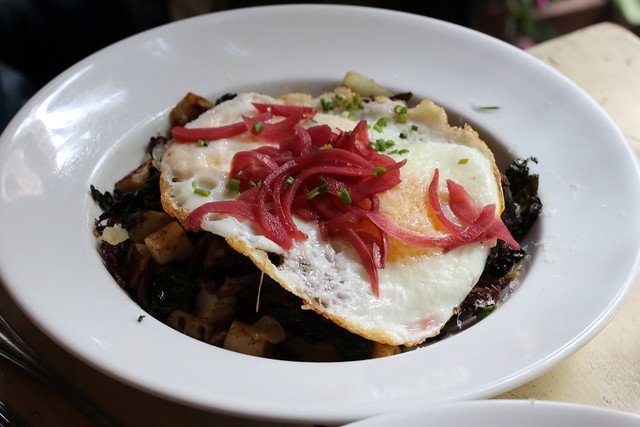 After all of this, we were stuffed but since we have to eat for the Insta (and because it sounded so good on the menu), we ordered the irresistible-sounding pear French toast. Four thick slices of Challah bread topped with pear surrounded by dollops of vanilla cream?  There’s practically no room for error here, and that’s coming from someone who doesn’t even like French toast. The crispy bread was still soft enough to yield to a knife and each bite I cut and dunked in syrup was a delight. Talk about a sweet sendoff. 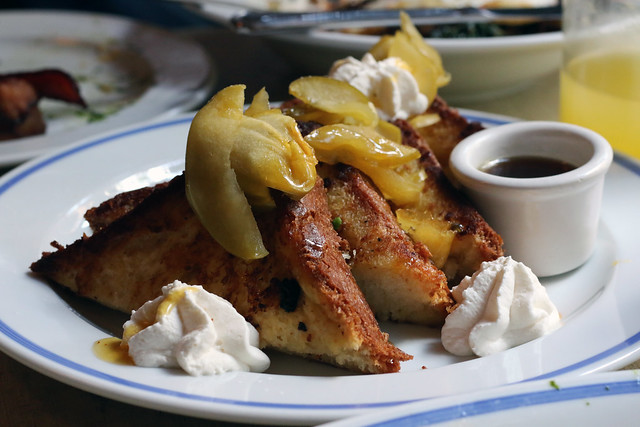 The only thing that would have made this lovely brunch even more lovely would have been if we were in actually in France (and if the service had been a bit quicker—but it was prime brunch time). We’ll definitely be back for the French onion burger and a glass of wine at the bar.

The Bitches Say: Five Flutes. The verdant facade of this SoHo French bistro will lure you in, and the tasty dishes and cozy atmosphere will make you stay awhile. The service could be more attentive at brunch, but as long as the cocktails keep flowing, tout va bien.

Little Prince serves brunch on Saturday and Sunday from 10 a.m. to 3 p.m.