I might still be recovering my aging bod from this Lavo champagne brunch and finding glowsticks in all corners of my apartment almost a week later, but I will continue to attest that this was the most fun brunch I’ve attended in NYC, period. 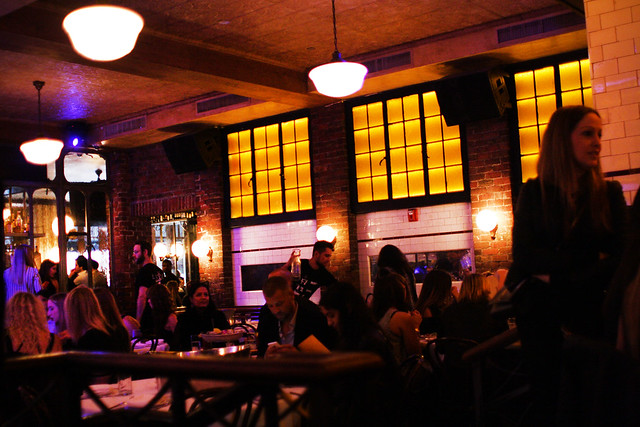 My girlfriends put this brunch on the books months ago. With our busy schedules, it’s pretty difficult to nail down a day like this, so it’s safe to say after a month+ countdown, we were very excited.

We arrived at 2 PM and got in line — yes there was a line for brunch — mingling alongside  a young trendy-set dressed for a night out. Forget your slouchy brunch beanie at Lavo. My “dressy flats” stood out like a sore thumb among the towering heel and leather-clad brunchgoers. There was some pretty serious bouncers guarding the door, who quickly escorted us through the crowds and ushered us to our seat.

Perched next to the DJ booth, we had prime real estate as we watched everyone start taking their seats. This was the ultimate people watching establishment, and we got a kick out of seeing the gaggles of girls strutting to their tables. At this point, the lights were still on and the beats were at a subdued tone, allowing for us to make our brunch orders without yelling. 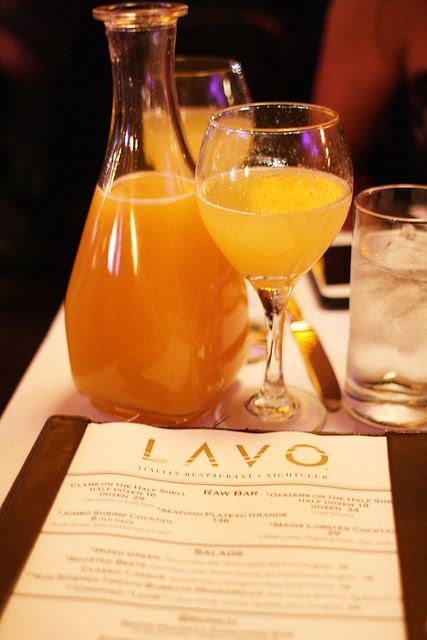 We started with prosecco, obviously, and our waiter recommended adding a peach puree to our morning drinks. We also quickly placed our brunch orders, as it was 2:30 and we were absolutely starving. The menu was pretty impressive, with a lot of variety despite Lavo being known for its party. 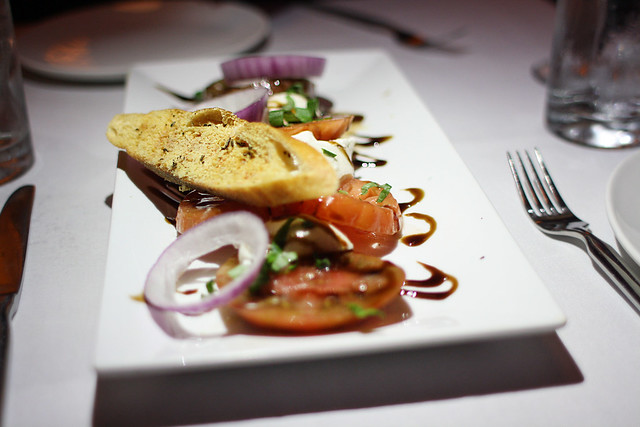 To balance out the heavy egg dishes we were about to order, we started with the sun ripened tomato bufala mozzarella with sliced tomato,‏ red onion, and fig balsamic appetizer. It was exactly what we wanted; fresh and light with an addicting soft mozzarella. 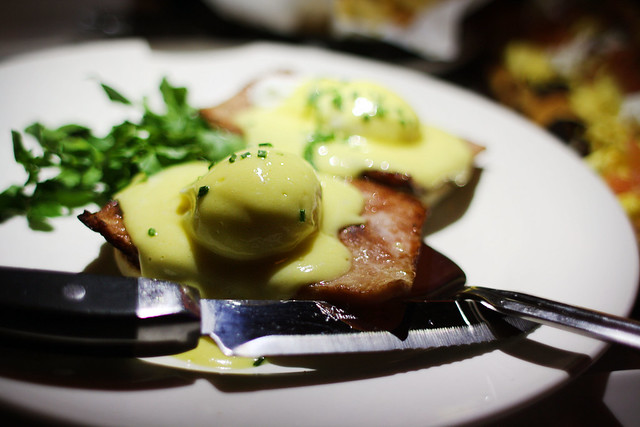 We placed an order of the super size eggs Benedict with Virginia ham, poached eggs, and Hollandaise to kick off our brunch fare. These really were supersize, delicious, and perfect for sharing. 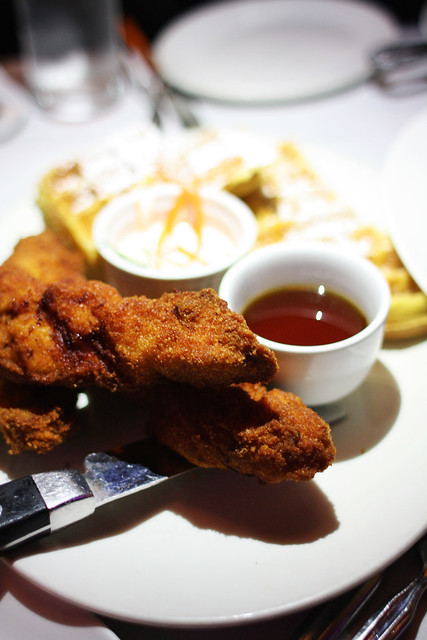 The waiter also recommended the “South Brooklyn” chicken and waffles with crispy spiced chicken, bourbon maple syrup, and spiced pecans which was pretty much amazing. The chicken was boneless and cooked to crispy perfection, and the two sauces it was served with we leveraged for everything else on the menu. 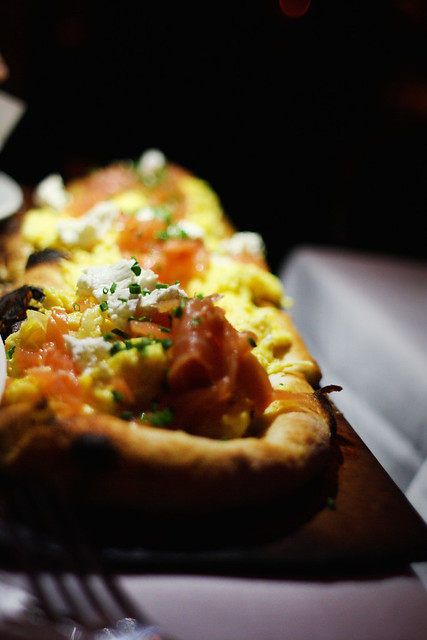 Lastly, we ordered the breakfast pizza with scrambled eggs, onions, smoked salmon, and goat cheese. The pizza was massive — it could have fed four — but we loved snacking on this in between bites of the more decadent items. The smoked salmon was fresh and the eggs plentiful. 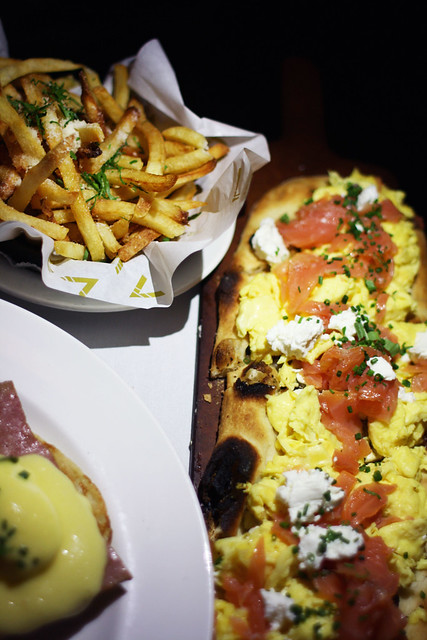 We couldn’t resist a side of truffle fries after catching a strong scent of truffle from across the room. Given the massive portions of our other entrees, this probably wasn’t necessary, but we were still pleased with our order.

Despite being beyond full for an afternoon of dancing, the lights dimmed, the music ramped up, and by the time we were finishing our last bites, people around us were already dancing on their booths. 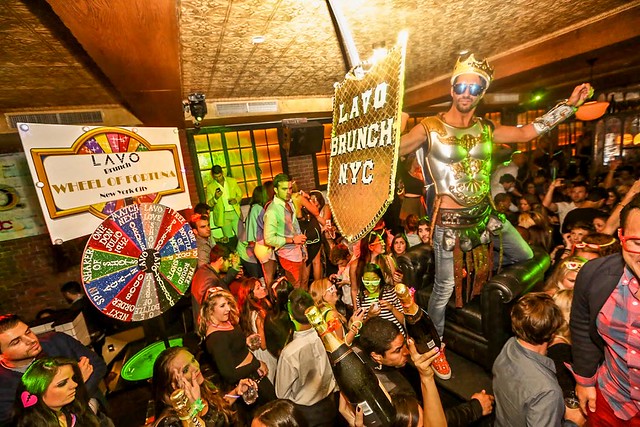 With the back-to-back beats, we couldn’t help but join the masses! In between our dancing, a towering strawberry shortcake was sent to our table, which was amazing. We did the two step while we shared as many bites as we could.

The DJ kept spinning until 6 PM, as we witnessed sparklers, oversized bottles, glowsticks and all kinds of impressive dance moves. It’s safe to say it was time for the Bitches bedtime when the lights turned back on.

The Bitches say: Five champagne flutes. Not only was the brunch fare fantastic, this was the best day party I’ve been to, period. This is a guaranteed blast with your friends, with awesome music to keep you dancing for 5 straight hours.

Lavo serves brunch on Saturdays and Sundays from 2 p.m to 6 p.m.