Sometimes a Bitch likes to venture out of the city and into the country for her brunches. In this case, the “country” is Alexandria, Virginia–a mere twenty-minute car ride for most city dwellers. We were invited to brunch on the house by the very trendy and new Junction Bakery & Bistro in the Del Ray neighborhood of Alexandria. So, we gladly fled the city and headed south.

Upon arrival, I was taken by the high ceilings, bright, natural light, and a bakery counter showcasing beautiful pastries. The space is nothing short of charming. It’s modern French bistro meets southern charm. The carerra marble round tables, traditional wooden thonnet chairs, and artsy tiled floor make for a perfect brunch environment and Instagram backdrop. As I scoped out the menu and endless display of pastries, the manager, Tami, greeted me and immediately offered me a table and a mimosa. Tami is my kind of lady.

As I waited for Cori Sue to arrive–which I often do as I am usually early thanks to my inability to trust Google Maps–I drank just about half of my mimosa. This mimosa was crisp, light, and refreshing. The kind of drink that goes down easy and makes you forget how many you ordered. We wished that there was a bottomless option, but Virginia laws are funny about bottomless brunch–so we can’t fault Junction on that one.

Once Cori Sue arrived we headed straight for the counter to place our orders. We started off with four pastries to share–a giant slice of Monkey Bread, an apple galette, a blueberry scone, and a paleo butternut squash muffin. As Cori Sue stays clear from excessive gluten intake, I jumped in and took one for team. 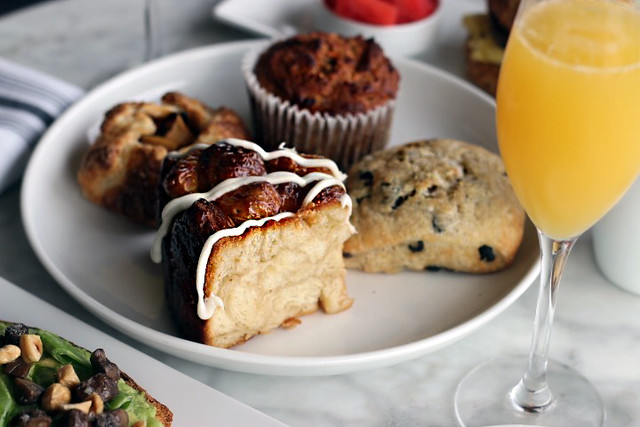 Each pastry was more delicious than the last. My favorite was the Monkey Bread. It was pure pull-apart goodness with plenty of gooey cinnamon swirls and cream cheese icing on top. The apple galette was beautifully presented as well as tasty. I tried the blueberry scone last and it was fine. Scones don’t usually excite me as much as other carbs do, so I didn’t really have a ton of opinions about this one. Cori Sue appreciated the uniqueness of her paleo muffin and thought it was quite tasty. Cori Sue, the full-time bruncher that she is, tried all the pastries in the name of professionalism. We both agreed that the Monkey Bread was the winner. 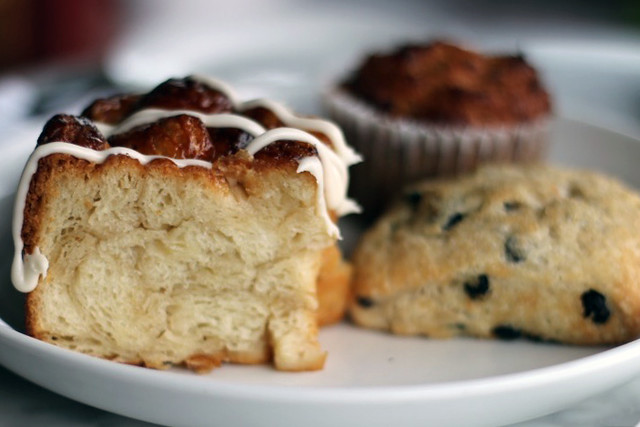 Before we both went into a sugar coma, our California toast arrived. This toast was topped with avocado and chopped snap peas, mushrooms, and hazelnuts on sourdough bread. The bread was thick and hearty and the avocado mixture was cold and refreshing. I was skeptical about the snap peas and mushrooms together, but they combined beautifully and the snap peas provided an exciting crunch. Cori Sue appreciated the great texture of the dish as well as the addition of more veggies. 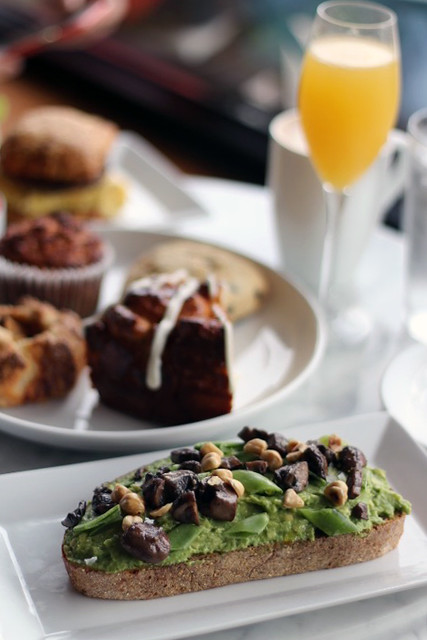 For my entrée portion of brunch, I ordered the country breakfast sandwich which was made with sausage on a cheddar and chive biscuit. I thought I would sorely miss actual cheese on this breakfast sammie, but I couldn’t have been more wrong! These biscuits are out of this world. I can’t think of a better biscuit that I’ve tried and I went to the Biscuit Bash this year! This cheddar and chive biscuit is somehow light and flakey as well as flavorful and filling. The eggs were cooked and seasoned perfectly and the sausage was tasty and just greasy enough. Fresh watermelon was served on the side which was perfectly ripe and in season. 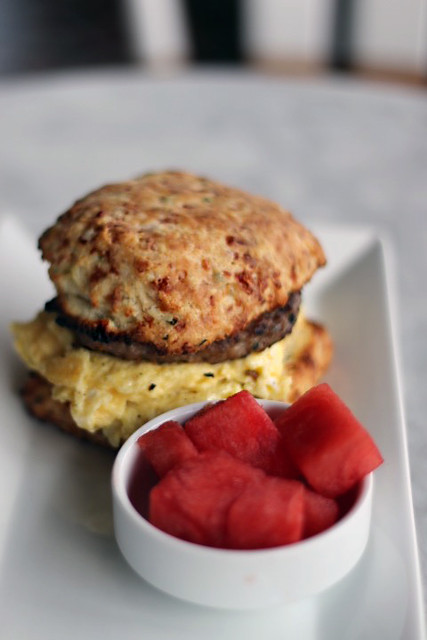 Cori Sue ordered fried eggs and a side of sausage for her entrée. She said that her dish was incredibly clean, fresh, and well-executed. The fried eggs were beautifully seasoned and perfectly cooked, and the sausage was delicious and well-seasoned. She liked that they served thinly sliced, roasted potatoes on the side rather than traditional shredded or diced hash browns.

As we chatted about upcoming projects and weekend plans, I couldn’t stop thinking about the chocolate raspberry galette I had spotted earlier. I unabashedly ordered without giving it a second thought, and I am so glad I did.

This chocolate dessert was heavenly. It was creamy, smooth, and dense. The fresh raspberries on top balanced the chocolate out nicely. It was the very best way to end the already carb-filled meal. 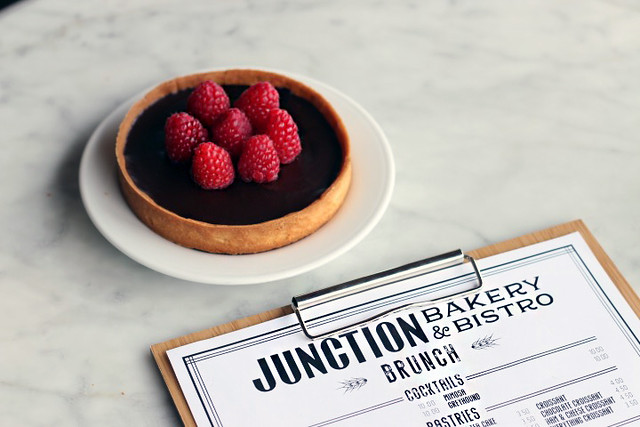 Overall, we loved Junction! It’s an adorable spot with delicious pastries, fresh-baked breads, and savory brunch items. It would be a great spot to catch-up with an old friend or bring your mom to for a leisurely morning.

The Bitches say: A. Head to Junction if you need some time away from the city, are craving some carbs, and love an insta-worthy space. Don’t leave without ordering dessert. Seriously.

Junction Bakery & Bistro serve brunch on Saturdays and Sundays from 7 a.m. until 2 p.m.