Brunch at Jue Lan Club began with promise. We were pleasantly surprised by the restaurant location, which was nestled in the side of a beautiful church, stained glass windows still intact. I’ve passed this a million times without noticing the health grading, one of the only indications it’s actually a restaurant.

I walked in to meet the other New York Bitches and felt as if I’d discovered some secret supper club. The decor was beautiful, with rich velvet upholstery, old church stone, colored windows, and bronze accents. Despite our perfectly normal reservation time (11 a.m.), the restaurant was completely empty. So empty that we immediately had a triage of waiters fawning over our table, which was nice but a little strange. 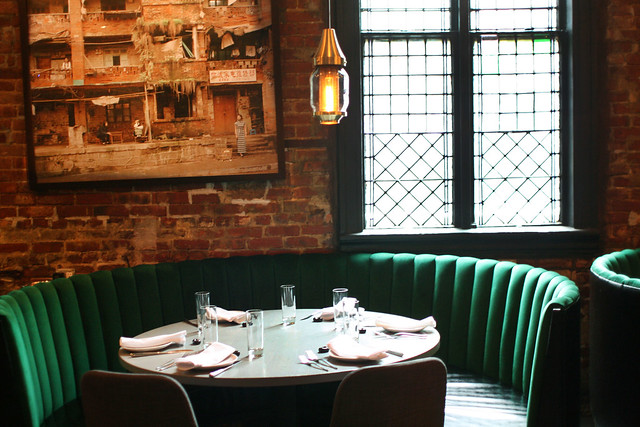 The bartender had not yet arrived despite the dim sum menu offering brunch cocktails, but Becca and Brittney both took risks and ordered drinks from one of the waiters who offered to try whipping them up. Becca’s Bloody was more like watery tomato juice, and with one sip, she set it aside. We tried not to  judge the brunch by its Bloodys and moved onto the menu, which showcased pages of Americanized dim sum dishes alongside brunch items like scrambled egg buns. 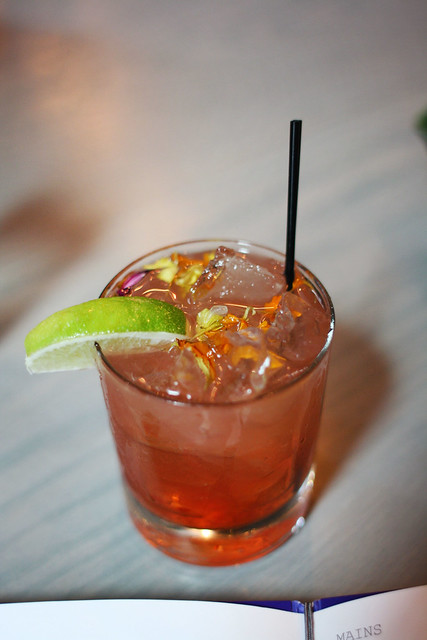 I was expecting the traditional dim sum experience with carts full of questionable but amazing entrees, and this was more like oversized Asian tapas. We placed a pretty solid order and then got to our Bitch work, avoiding some awkward staring from the staff who were still hovering around our table. 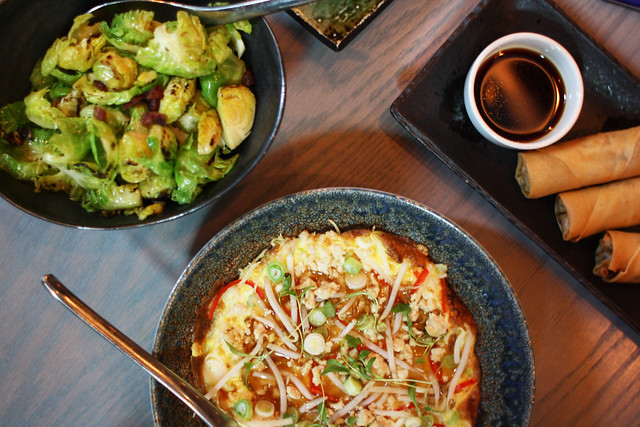 We started with the egg, Chinese bacon, and tofu rolls—a safe choice. The dipping sauce was nice, but the insides were cold. Which was strange, because it’s not like the kitchen wasn’t bustling with orders. This would have been pretty yummy if the insides were piping hot. 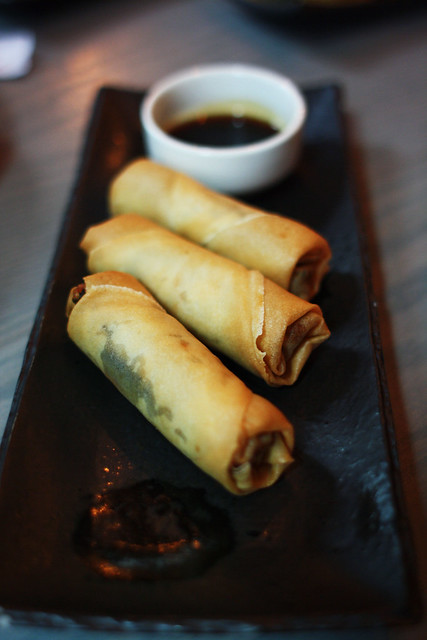 Next up was the chicken lettuce wraps, which was a beautiful presentation. The wraps were hearty and fresh, and a standout in the group. 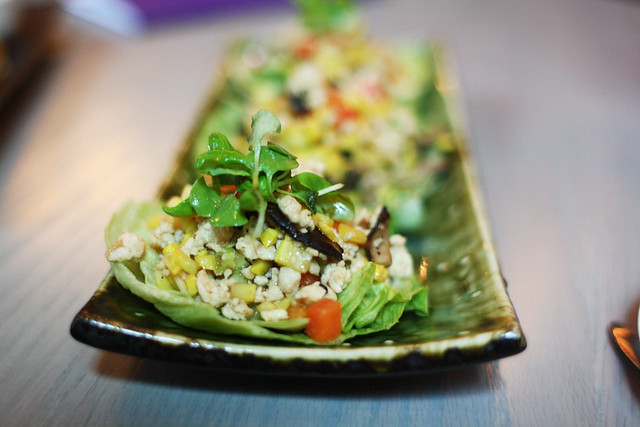 We couldn’t resist ordering the breakfast dim sum items on the menu, so we decided to try the vegetable egg foo young. This was Jue Lan Club’s version of an Asian frittata, which would have been great if it wasn’t also cold. It made the entire dish hard to swallow, as there is nothing more gross than cold eggs.

We were confused because with dim sum, you are served dishes as they are ready. Everything should have been piping hot because timing shouldn’t have been an issue. 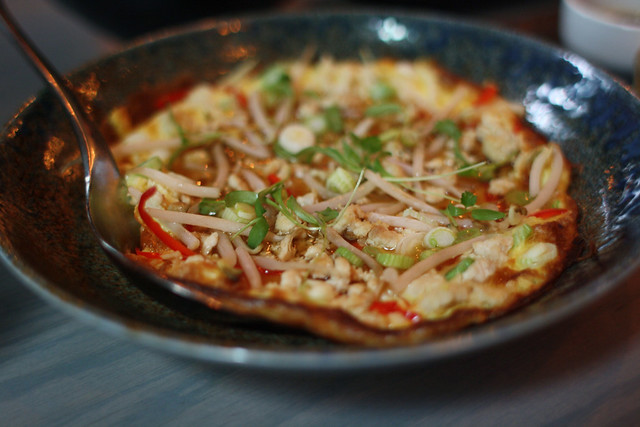 At this point, we were all a little nervous for the bacon and egg bao buns. It was an awesome concept (who doesn’t love a good pork bun?!) but you can guess what I’m about to say—the temperature left everything to be desired. 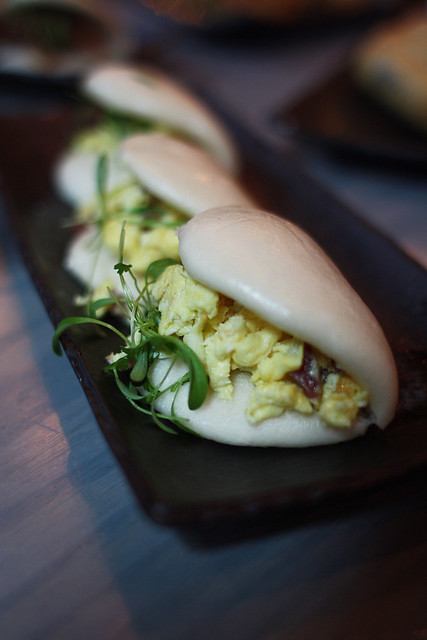 The brunch never really got going; the wait staff never really stopped lurking; the drinks never really arrived in proper order; and the food temperature was never really okay. While the menu seemed very creative, and the space was gorgeous, everything was off. Plus, the restaurant was still nearly empty when we left, which is never a good sign.

At the end of our meal, a man walked over who we can only assume was also a member of the staff, and he laughed about the website name listed on our credit card (we get this a lot about the name ‘Bitches Who Brunch’—it’s usually welcomed banter) and then shared that he had is own fair share of “bitches” the previous evening. Our jaws nearly hit the table.

We were invited to try Jue Lan by their PR company, and are always grateful for those invitations. But typically the PR folks in question will, at least, give the restaurant a heads up on who is going to be writing about the food. And then, perhaps, the kitchen might attempt to serve said food at a marginally edible temperature.

At the end of our strange and slightly awkward meal, we were presented with fortune cookies, which we cracked open to reveal oddly sexual fortunes about men and bananas. They weren’t fortunes, and they weren’t funny. And that pretty much summed up our brunch. 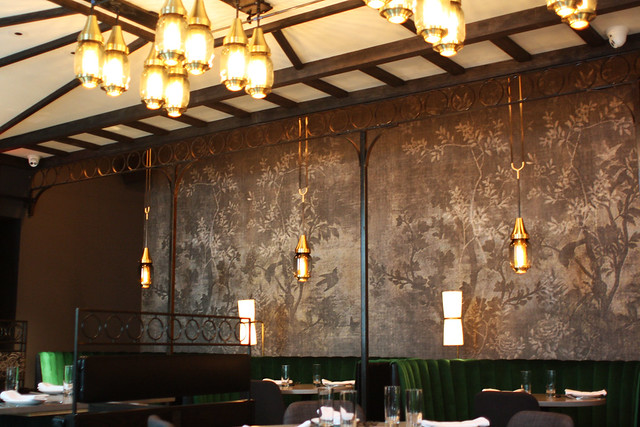 The Bitches say: D. This was a pretend dim sum brunch, which didn’t deliver anything warm and left us confused. The space and the menu have so much potential, but they need a food and service overhaul.