It’s hard to believe I have been writing about my brunching adventures for over a year. How the time has flown by! I continue to explore this city devouring one brunch dish at a time.

While I have been dedicated to going to the newest, and most buzz-worthy restaurants around town, I also make a point to go to Chicago classics and local favorites. One weekend, I made time to go to brunch with my friend Britt and her husband at Jane’s Restaurant in Bucktown. 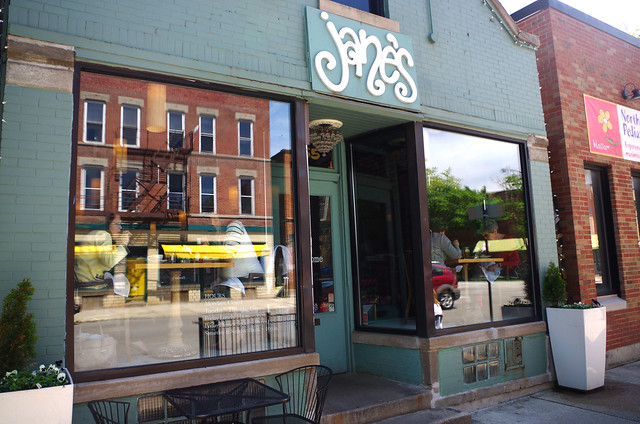 Jane’s Restaurant is a small, locally owned restaurant in Bucktown. It’s one of those places that if you blink, you just might miss it. It has a hole-in-the-wall feel, and that’s where it gets its charm. It has also been on numerous Thrillist and Eater lists for a variety of dishes and drinks, so I decided this spot was definitely worthy of a Bitch review. 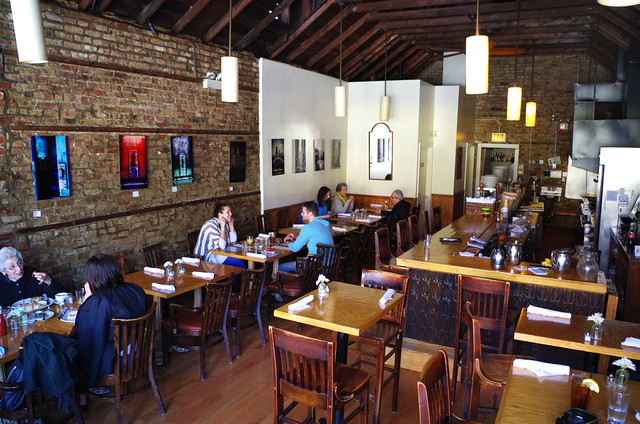 Believe it or not, I had been to Jane’s before this weekend for brunch. I went a couple months ago when I was under the impression that brunch was served on Fridays, which is what Jane’s website advertises. It has since changed, and Jane’s does not offer brunch on weekdays anymore. Jane’s should get to updating the website to reflect the changes. I was quite disappointed the first time around that I wouldn’t be able to try the brunch, so I made a point to return.

I met my friends Britt and Ryan for brunch in the late afternoon on a sunny Sunday. It was a beautiful day, and as patio season has an expiration date in this city, I knew we had to take advantage of Jane’s outdoor space.

By the time I arrived, Britt and Ryan were seated outside, which was packed—I guess others had the same patio brunch notion as me. 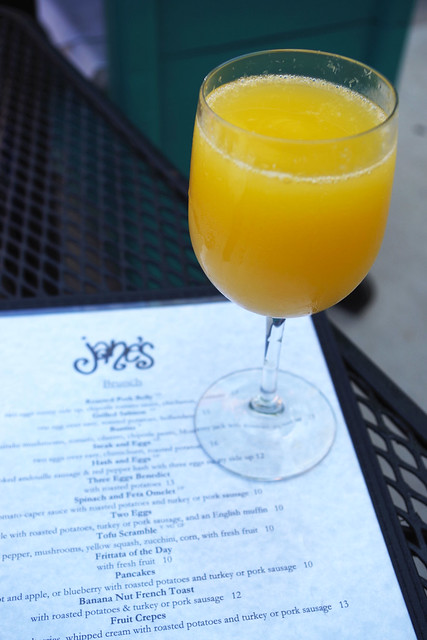 The three of us got down to business and ordered our beverages for the meal. I ordered my standard mimosa and a cup of coffee. My mimosa was delicious and my coffee was a nice contrast to the citrus and carbonation as it was bold and hot, and came equipped with sugar and a tiny pitcher of cream. 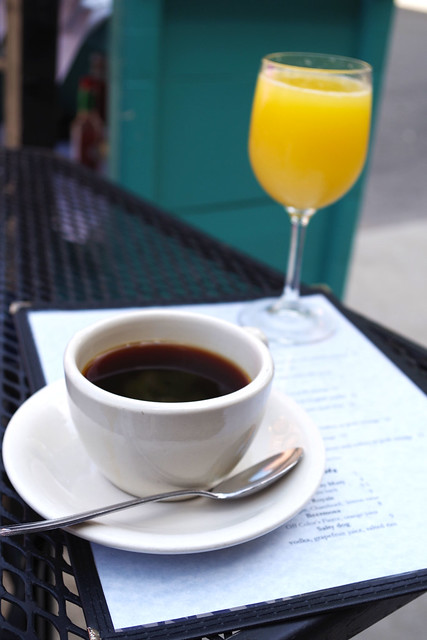 Britt ordered a champagne with some citrus liqueur—it was light, bubbly, and minimal. I tried a sip of it, and I loved it. 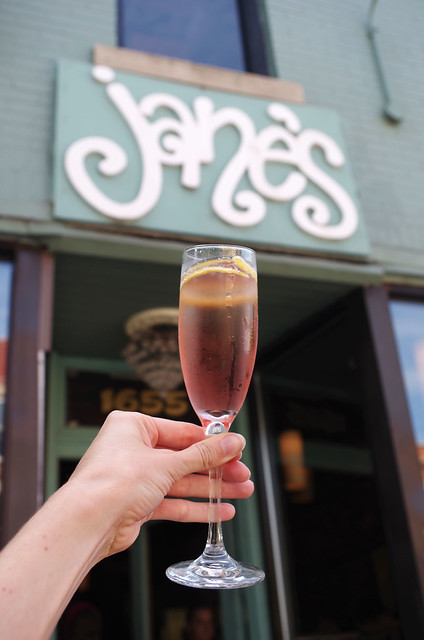 Since I had already been to Jane’s previously, I had eyed the menu and knew what I was going to order already. Ryan and Britt however took some time in making their entree choices. 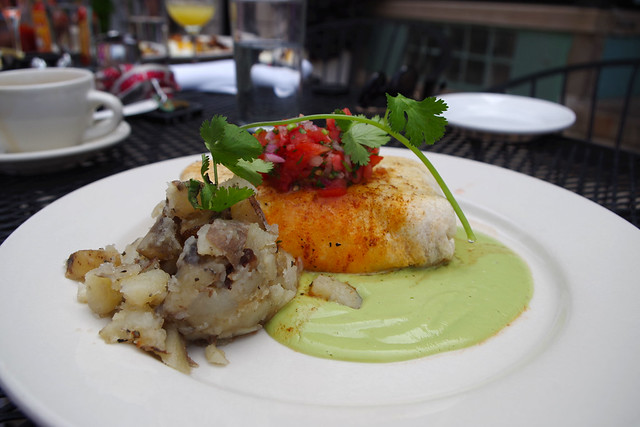 Ryan ordered the burrito, which had eggs, black beans, shiitake mushrooms, tomatoes, cilantro, chipotle pesto, Monterey Jack cheese, sitting in a puddle of avocado mousse. There were roasted potatoes on the side as well. Ryan was not a huge fan of the burrito, saying that it was ill proportioned with the ingredients on the inside—too many beans, and not enough of the other ingredients. Also, the wrap itself was dry and the avocado mousse didn’t offer enough moisture to keep the wrap tender and malleable. 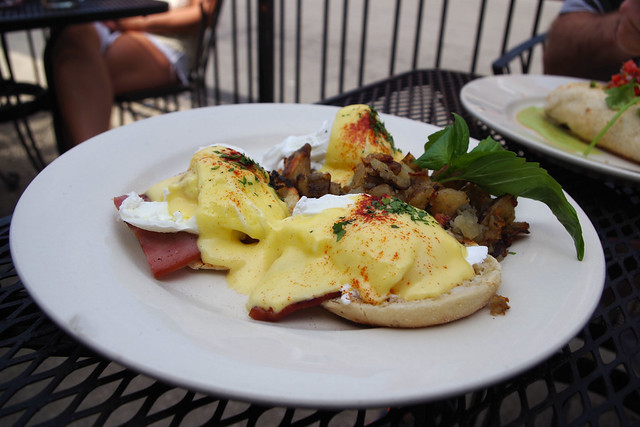 Britt ordered her favorite: eggs Benedict. The three eggs Benedict was a classic ham Benedict, with poached eggs and Hollandaise. The entree also had a side of roasted potatoes, which were tender and well seasoned. Britt did quip that the Benedict was good, but not the best she had ever had. Also, the three eggs made for a lot of food, and Britt would have been just as happy with two Benedicts instead of the three; it was really filling. 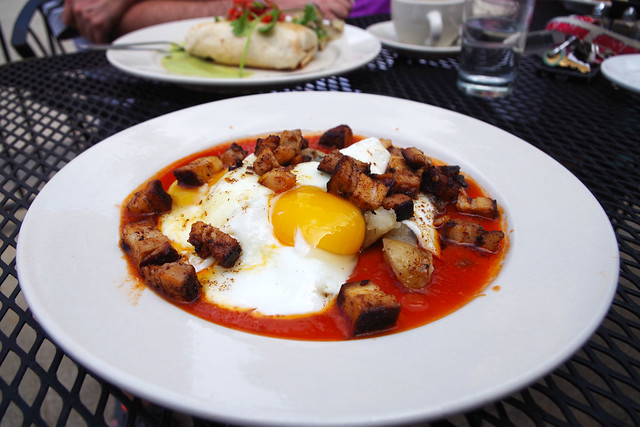 As I had hoped to order this dish the last time I was here, I ordered the roasted pork belly. The dish came out almost as a soup with cubes of pork belly, potatoes, in a chipotle tomato sauce, and two eggs sunny side up. It was as delicious as it looks, and while this is not the most typical brunch dish (or typical dish for me to choose) the dish was delightful. It’s mild, flavorful and filling. The pork belly is tender, and with the potatoes in the mix, there was a weight to the mix without being too heavy. I really enjoyed the dish.

All in all, I enjoyed my dish and beverages, but I couldn’t ignore that my two friends found their entrees to be lackluster. I also couldn’t forget my annoyance at the first visit to Jane’s when I was told that brunch was no longer served on Friday’s—that was a minor inconvenience to say the least.

The Bitches say: C+. I enjoyed my food, but for all the times I have seen Jane’s mentioned on “places to eat” lists, I am only left wondering, “why?”

Jane’s serves brunch every Saturday and Sunday from 8 a.m. to 3 p.m.