This summer, I’ve brunched in some pretty spectacular locations. Along the river, on the lake shore, 21 stories high… so walking into Jake Melnick’s dark interior, with dozens of sports games on, was a bit of a culture shock. But while rooftop, poolside brunches can rely on their views and atmosphere to draw a crowd, the corner sports pub has to have good food to be worthy of a brunch visit.

Jake Melnick’s Corner Tap is a sports pub tucked in along Mag Mile. They are known for their wings, earning an accolade from The Today Show as “top chicken wing spot in the U.S.” Other notable menu items are the monster burger, weighing in at a whopping eight pounds, and the tailgate tower, a behemoth combo of 18 wings and loaded nachos. 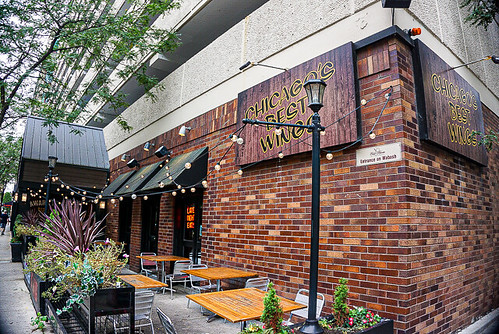 When Jake Melnick’s invited us in for a complimentary brunch, I was excited to try out some of their fabled creations. My boyfriend, Cam, was excited to watch the Patriots game during brunch, so it was a win-win.

We slid into a dark, wooden booth with a view of the Pats game. The restaurant is expansive and ready to seat large groups of sports fans, but as we get later in the season, it’s wise to make a reservation. The restaurant was full for the entirety of our brunch. 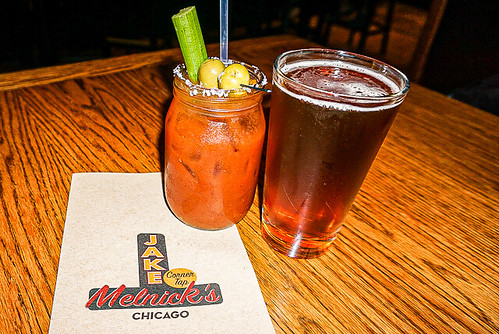 They have a huge drink collection with plenty of beers to drink while indulging in Sunday NFL football. Cam got started with the Surely Furious IPA. It was hop-forward, but not too heavy for an early morning libation. 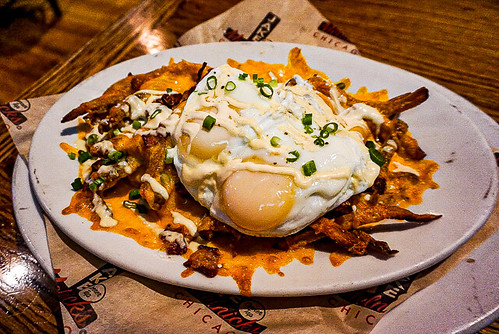 To start, Cam and I split an order of the breakfast fries. Jake Melnick’s does not do anything halfway. They brought out a platter of fries stacked high with cheddar, bacon, green onions, a spicy aioli, and two fried eggs. It was a huge serving and definitely should be shared with a group. We both enjoyed this appetizer. It’s great for eating mindlessly while talking and watching the game. The fries held up well to the sauces and didn’t get overly soggy. 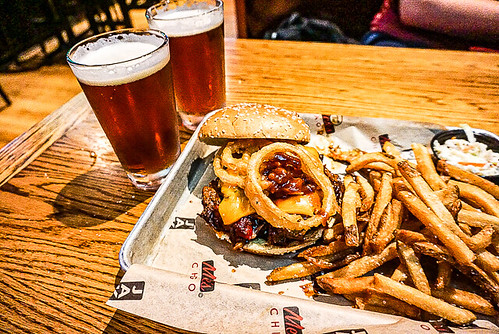 For his main course, Cam got the “sloppy pig” sandwich. It lived up to its name. The gooey barbecue sandwich had chopped pork, brisket, and chicken topped with cheddar and fried onion rings. Cam ended up eating most of it with a fork because of the mess it made. It came with another absurdly large portion of fries. The meat combo was gluttonous, but super tasty. 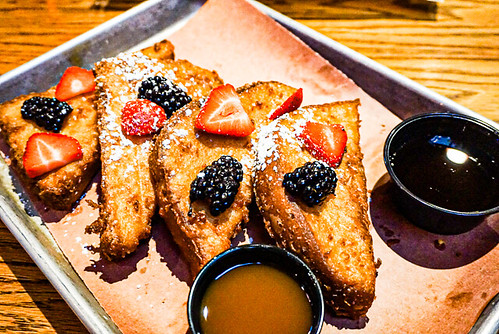 I chose the pancake French toast, which features challah coated in pancake batter, then deep fried. It came drenched in strawberry sauce, with syrup and house-made bourbon caramel glaze on the side. We agreed Jake Melnick’s is not the spot to go while on a diet. But we’re not dieting, and the French toast is out of this world. It had a crispy outside with a fluffy interior. I didn’t use the bourbon caramel glaze because the meal was sweet enough. 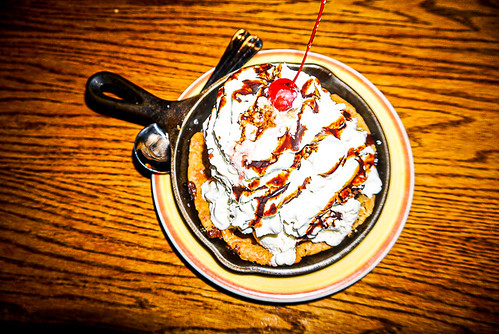 The staff surprised us with a chocolate chip cookie skillet sundae. Though we were both full, there is always room for dessert. This was served in a hot cast iron skillet, with a gooey cookie buried underneath a mountain of vanilla ice cream, whipped cream, and hot fudge. If you manage to save room for dessert, this is worth splitting. Or don’t share. I’m not judging.

While the football crowd is cheering for their team, we’re cheering for the delicious, hearty brunch menu at Jake Melnick’s. Order a Bloody Mary and get ready to cheer on The Bears!