On a weekend full of birthday celebrations, Sunday was my day for regaining my strength for the week ahead. While I may of wished it was a more relaxing day, I had a great Sunday with two of my favorite guys.

Saturday was a debaucherous day that included shopping, a party bus, and a birthday dinner—it was a long day, but a fun one.

The only hard-set plans I had on Sunday were brunch at Hub 51 in River North, set up by complimentary invitation from Hub 51’s management team. 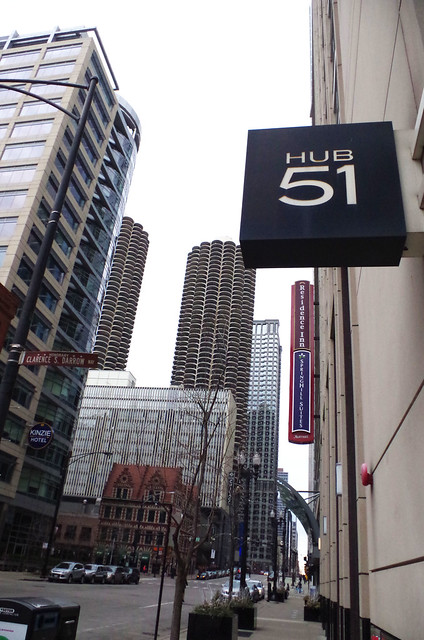 I was excited to try the brunch, and to bring my boyfriend, Cameron, and his roommate, Mike, along for the ride. This was Mike’s first Bitches brunch, and he was excited but skeptical.

“So, you take a lot of pictures? How long do I have to wait before I can eat?”

All things considered, he ended up being more patient than I expected. 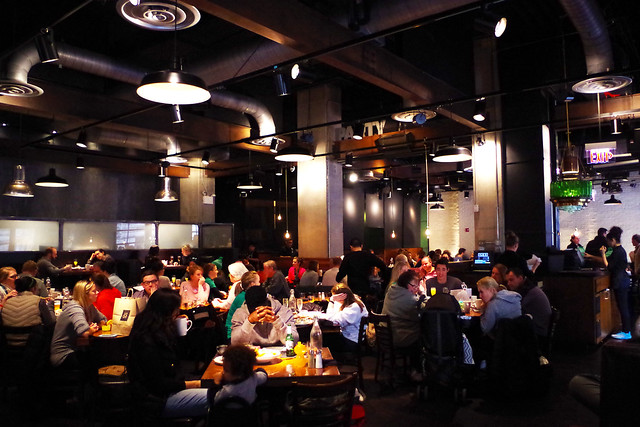 I have passed by Hub 51 many times, while out on Hubbard Street, but I had never ventured inside. Hub 51 is an expansive, industrial space with dark ceilings, low hanging light fixtures, and heavily tinted windows facing Hubbard Street.

On this particular Sunday, Chicago’s were overtaken and traffic rerouted as a result of the Shamrock 5K that takes place annually through the streets downtown. A majority of the crowd at Hub 51 was decked out in green apparel, and were continuing their Sunday with a marathon brunch full of Bloody Marys. While I hadn’t completed a 5K that day, I felt like I ran a marathon the day before, so I was desperate to order a cocktail. 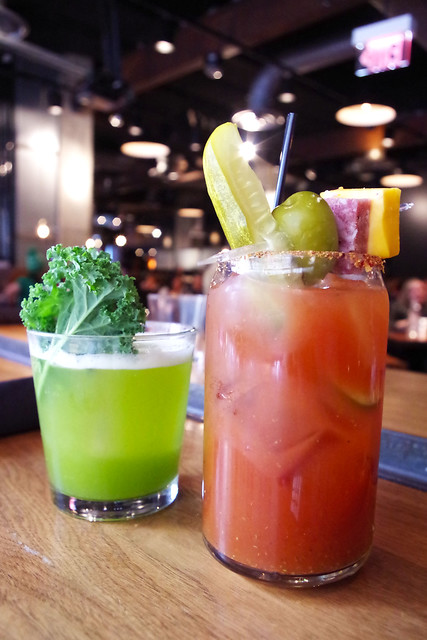 All three of us ordered libations: I ordered the kale margarita and the guys both ordered the Hub Bloody Mary.

I absolutely loved my kale margarita, and felt like I was receiving vegetable nourishment, while also having a cocktail. Win-win. The cocktail comprised tequila, pineapple juice, lime juice, and kale—it was light, refreshing, and went down way too easily. 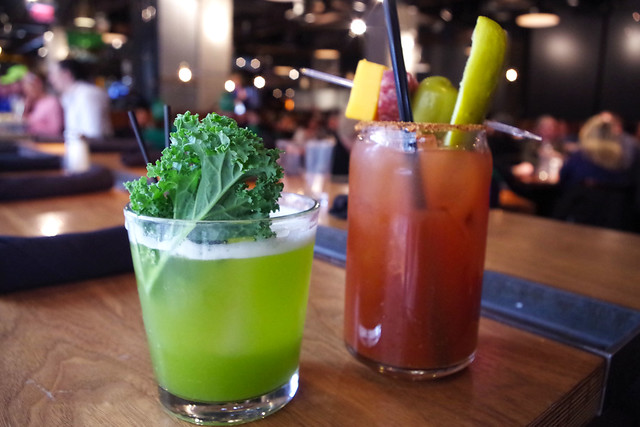 Cameron and Mike both ordered the Hub Bloody Mary, made with infused Hank’s Vodka and a housemade Bloody mix. It also came topped with a skewer of cheese, meat, and a pickle wedge that supplied the guys with snacks while we waited for our appetizer. Cameron was not too fond of the Bloody, stating that the flavor was “off.” Mike enjoyed the beverage enough to order two—they may be best friends, but they proved to have different tastes. 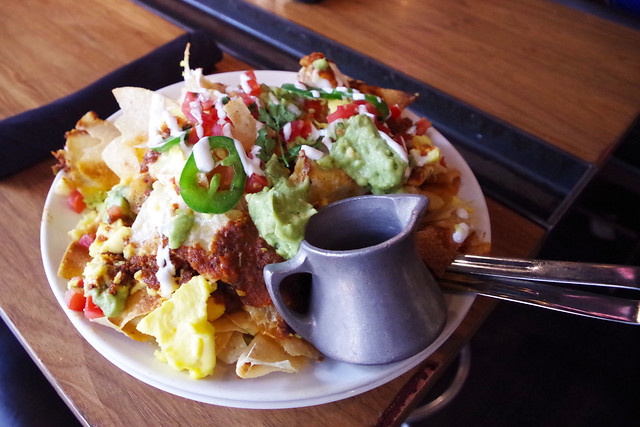 We ordered the breakfast nachos for our appetizer. The nachos came topped with scrambled eggs, guacamole, salsa, cheddar cheese, oaxaca cheese, and jalapeno peppers. We didn’t waste a moment digging into this pile of deliciousness. The scrambled eggs were fluffy and delicious and gave the dish a “breakfast” feel. However, all of us agreed that the nachos would have been spectacular had they been topped with some sort of meat. 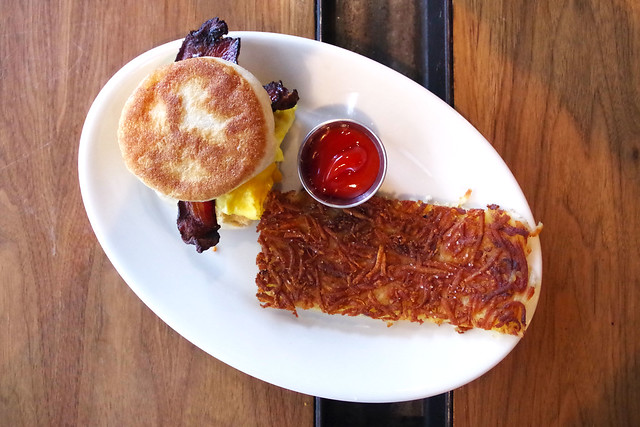 Mike was really struggling this morning, and ordered two entrees for brunch to fend off his hunger and hangover. First up for him was the bacon and egg sandwich with tomato, egg, brown sugar bacon, cheddar cheese, and mayo. It came with a hash brown on the side, which is quite possibly the biggest hash brown I’ve ever seen. 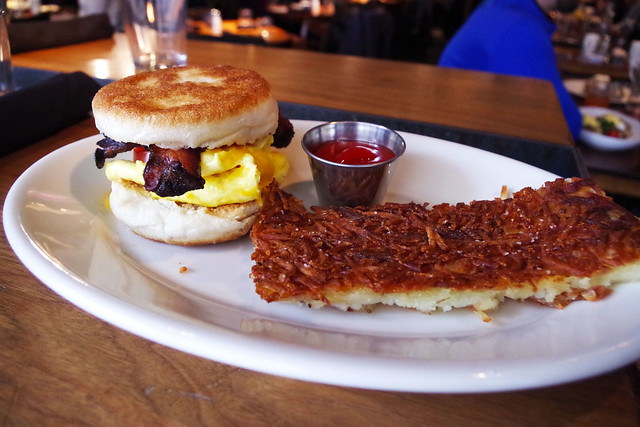 The sandwich was not memorable nor unique, but it was exactly as it was advertised on the menu. It was a far more basic dish then Mike would have preferred, but regardless of preference, he inhaled the sandwich. Much like me, Mike left the hash brown alone, as it was overcooked and lacked flavor. 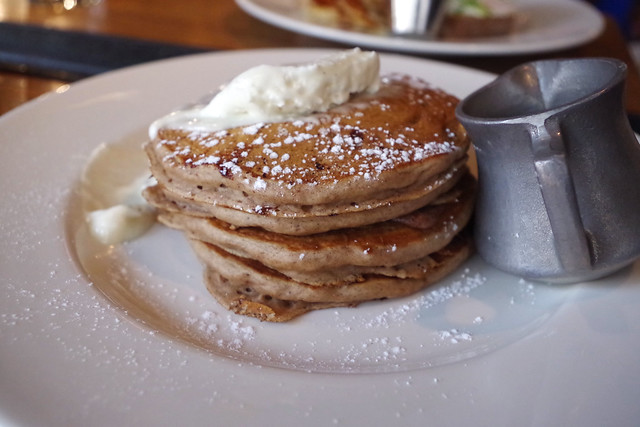 The second entree Mike opted for was the cinnamon roll pancakes with vanilla bean cream cheese frosting. With such a description, you can imagine it was a decadent dish. It also happened to be the highlight of our entire brunch. 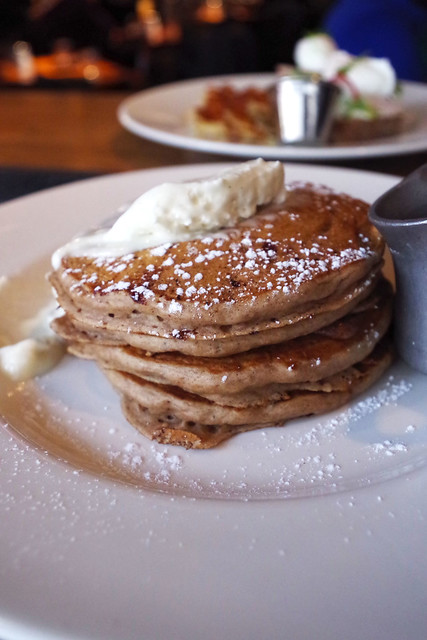 The stack of hot cakes were flavorful and had a pillowy texture. The icing was a delicious touch, and melted all over the warm pancakes by the time I got to sample the dish. All three of us really enjoyed the entree, and the sugar coma that followed after consuming every bit. 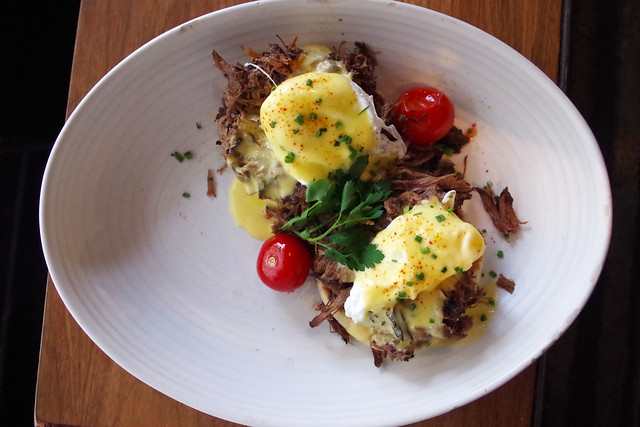 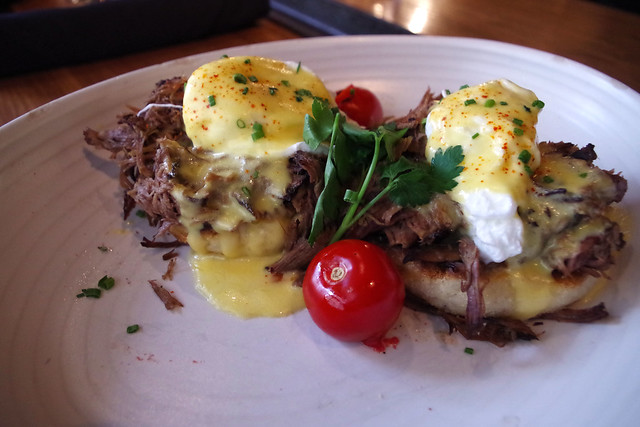 Cameron enjoyed the dish, but did stare longingly at the cinnamon roll pancakes. He stated that the Benedict paled in comparison to the pancakes— I think he had a bit of order envy. 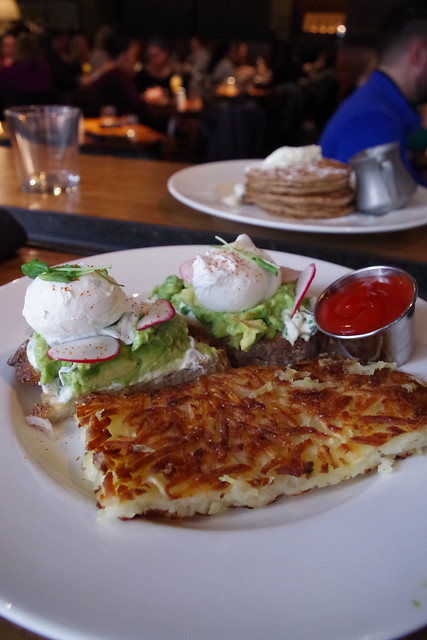 I wanted something light and flavorful for my entree, so I chose the avocado toast. The toasted bread came topped with two poached eggs, Hass avocados, and mascarpone cheese. I was disappointed that my eggs were overcooked, but the staff was willing to send two fresh, perfectly poached, eggs to the table to make up for it. 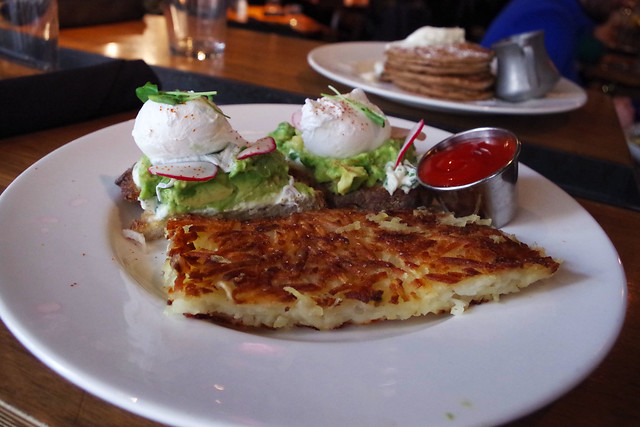 The avocado and mascarpone cheese were light, flavorful, and delicious. It was exactly the kind of dish I was hoping it would be. I was turned off by the hash brown, much like Mike, as it was dry and flavorless. A lighter and fresher side would be better to accompany the avocado toast, than the hash brown.

All in all, Hub 51 was a solid brunch spot, but could use some sprucing up of the brunch menu.

The Bitches say: B-. The cinnamon roll pancakes, the kale margarita, and the breakfast nachos (plus some meat) are all delicious, go-tos on the Hub 51 brunch menu. But some of the other dishes lacked the necessary pizzazz. Next time, you’re on Hubbard Street during the day, head there for some bites and brews.