New brunches are always exciting for this brunching gal. So when I was invited to come check out Honey’s for brunch, I was delighted. The restaurant debuted brunch in mid-February, after recently opening nine months ago, and after a few weeks perfecting the service, I was able to come and try the offerings.

Truth be told, I did not know much about Honey’s, except that it was a new spot to pop up on Lake Street, on the western side of West Loop. There have been a lot more restaurants popping up in that area, which is great for me, seeing that it is close to where I live, but also because that area is cute and unassuming thanks to the L train that loudly parades along Lake Street.

One Sunday, Charlotte and I ventured out to accomplish our usual agenda of brunch, shopping, and maybe a workout class. Nine out of 10 times, two of those three things actually happen. I’ll let you assume which.

After finding parking, Charlotte and I wandered the block wondering where Honey’s was tucked away. In the middle of the block behind unassuming doors with the word “Honey’s” etched on the glass, we walked in to find a small, quiet lobby area smelling of lovely aromatic smells, thanks to a candle or a diffuser, and were greeted immediately by staff. 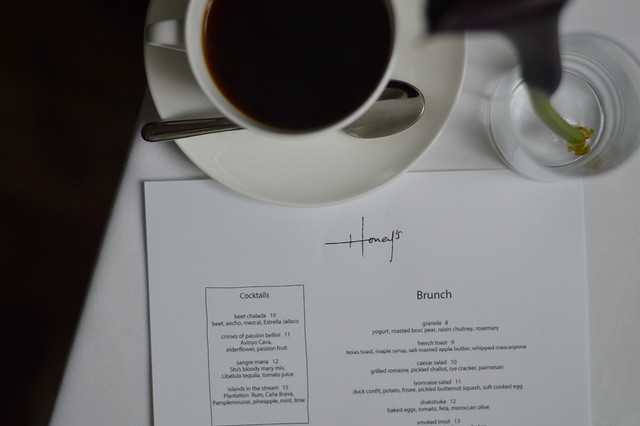 As we were escorted to the main dining area, we were pleasantly surprised when the doors swung open to a beautifully lit bar area. Considering how dark the front room was, it was a treat to see so much light in this main room, especially since this particular Sunday it was kind of gloomy outside, per a typical February day in Chicago.

Around the corner from the bar area was the main dining area, also surprisingly well lit. A triangular skylight let lots of natural light into the room, and the large leather booths and soft wood interiors provided an upscale interior.

Charlotte, who is my interior-decorator BFF and works for a prestigious furniture retailer was impressed with the space, and we both ogled over the mid-century modern furniture that accented the dining room. We loved the coffee table books highlighting artwork and design that added warmth to the bookshelves (which was also home to the tableware for the restaurant). Plants stand tall over each of the large booths, offering a super welcoming environment. The interior of this space is sure to be envied by many other restaurants in the city. It is just darling. 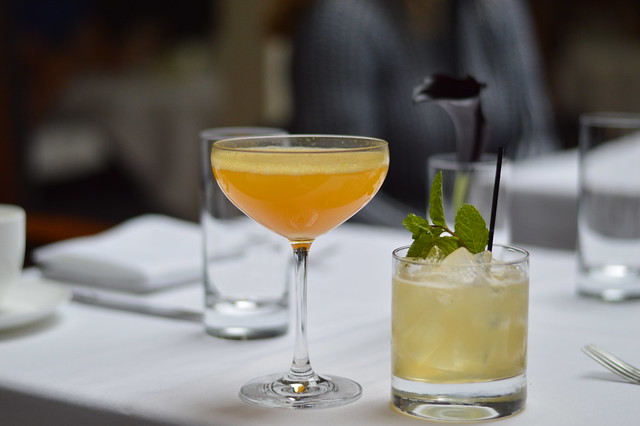 Now onto the food. The brunch menu, while somewhat limited in food options, is nonetheless all encompassing of every brunch-goers wants and needs. Sweet and savory dishes are both offered on the menu a plenty, as well as sides and brunch cocktails. Menu items include some unique adventurous dishes, as well as some simples ones. 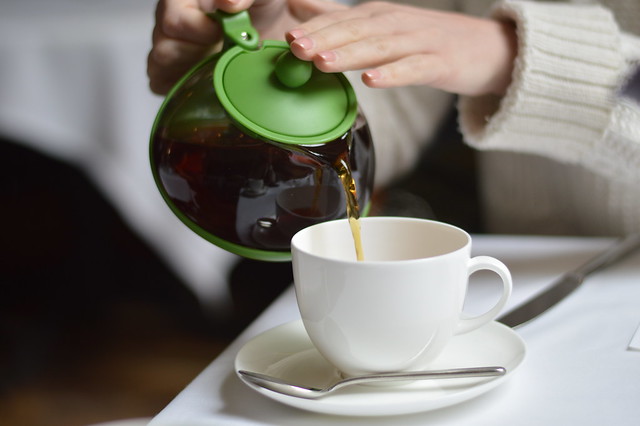 Charlotte and I each ordered a brunch cocktail in addition to coffee and tea; the “Crimes of Passion” Bellini for her, and the “Islands in the Stream” cocktail for me. Her Bellini was fruit-forward but not overly sweet, made with passion fruit, elderflower and cava. It was a pretty cocktail, too. My cocktail was arguably too delicious and went down a little too smooth, I might say. A simple rum cocktail made with Plantation rum, cana brava, grapefruit, pineapple and mint; it was tart and refreshing, and really tasty.

Big-eyed and empty-bellied, Charlotte and I were anxious to throw in a few food orders to start. I appreciate the staff being conscious of me taking photos and snapping shots with my iPhone to document my brunch, but I wish they had also been equally as conscious of how hungry we were and eager to order. After a few minutes, our server took our orders, thankfully. 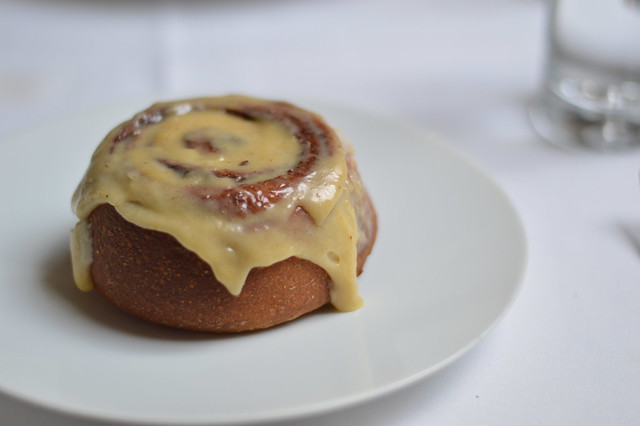 We started with the cinnamon roll and the Lyonnaise salad. The cinnamon roll was glazed beautifully with a cream cheese frosting, but after a few bites we noticed a unique flavor to the dish. I assumed (correctly, after asking the server) that the cream cheese had miso in it. I am a big fan of miso incorporated into dishes, especially sweet, dessert ones, but Charlotte did not seem to be such a fan. 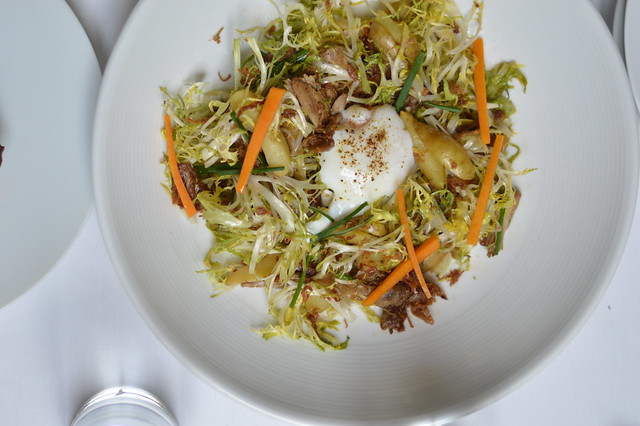 The Lyonnaise salad was the type of salad I dream of having at brunch. I am a big fan of frisee greens and a soft boiled egg in a salad, and this had both. Served with duck confit, potato, and pickled butternut squash—this salad was exquisite. 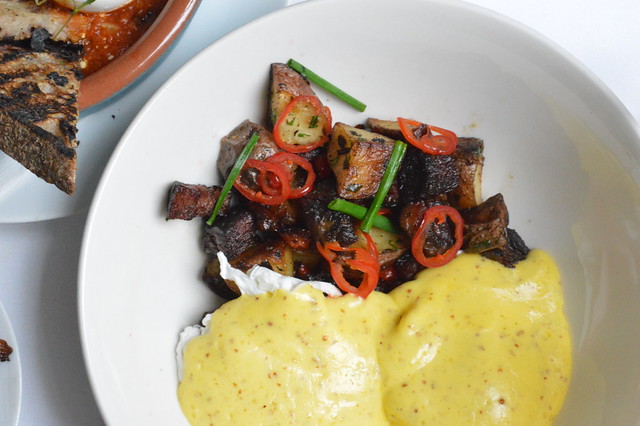 For entrees, Charlotte was desiring the short rib pastrami hash, with pickled fresno chilies, a poached egg, and whole grain mustard Hollandaise. It was delicious. While made with two fatty and savory meats, short rib and pastrami, it was not overly meaty or heavy. The dish was well-balanced, and perfectly portioned; it was not too much at all. The Hollandaise was strong and flavorful. 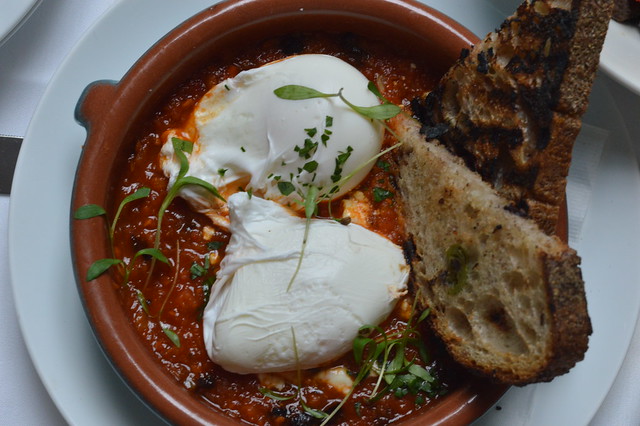 Although I am not typically a Shakshuka gal, I opted to step out of my comfort zone, because I trusted that this contemporary American-Mediterranean inspired restaurant might have the one to change my opinion on the dish, and I must say, they did. 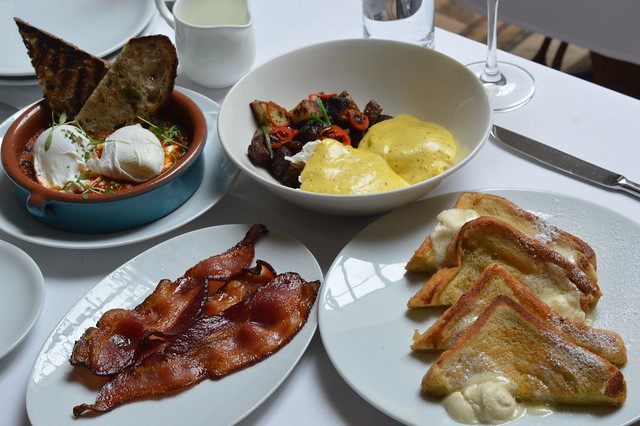 I have friends that absolutely love Shakshuka and always order it off the menu, and if every Shakshuka tasted as good as the one at Honey’s I might be so inclined as well! The tomato sauce was flavorful and zesty, and the baked eggs were cooked perfectly. It was a beautiful dish and I really enjoyed it.

Being ever so gluttonous, we also decided to try the French toast to share and order a side of bacon. While I completely judge myself for ordering a third entree, I must say I have absolutely no regrets. I always crave a sweet dish to compliment my typically savory entrees, and this French toast was just what the doctor ordered. 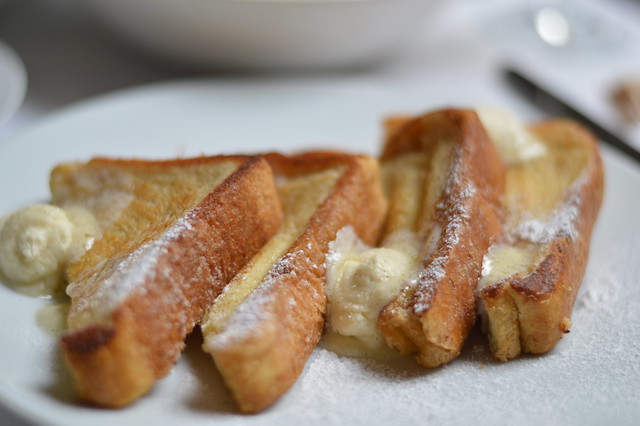 In a brunching world where it is so often that a French toast comes with a fruit or berry compote of some sort, topped with a unique crumble, or dolloped with a specialty whipped cream or a flavored-mascarpone, this French toast was unique in that, well, it wasn’t all that unique. Not meaning any disrespect, I share this in the best way; the dish was simple, yet delicious, and did not need anything extra to accompany it. It was just that good. Thick slices of buttery Texas toast, complimented with a little salt roasted apple butter and a tiny dollop of mascarpone, made this dish an unassuming, perfect finish to the meal, similar to the restaurant that created it. 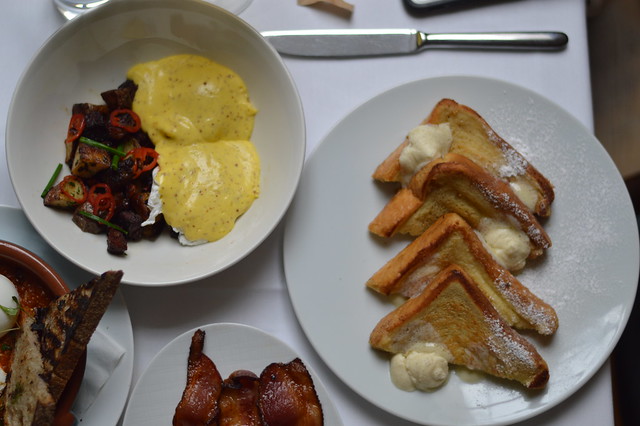 Stuffed and feeling as if we were going to explode, Charlotte and I were ready to head out after having an awesome brunch at Honey’s. Though the service was a little slow at times, and our meal was quite longer than normal, the experience was nothing short of wonderful. Arriving around 12:30 I was happy to see that a steady flow of parties continued to stroll into the restaurant for brunch service the entire time during our meal.

Upon leaving the restaurant, we were greeted by the handsome owners and partners behind Honey’s who were anxious to show us some more of the space. Honey’s also hosts a back bar and private dining area, in a cute back room. The bar itself has a unique story, but I will leave that to you to ask about it upon your visit, in fear that I will not do the story justice by retelling it here.

The Bitches Say: A+. With a lot of contemporary American-inspired restaurants in the area, Honey’s does not disappoint, and somehow adds something to the area that competitors lack. The space is warm and inviting, and beautifully decorated, and a progressive menu with yummy items will leave everyone happy. We can tell this will be a contender for our “Best Of” in 2017.