Anytime a friend visits from out of town, a proper boozy brunch is in order. It’s a great way to get everyone together before weekend obligations take hold and catch up with a few drinks, without battling crazy noise levels at a packed bar during the evening. 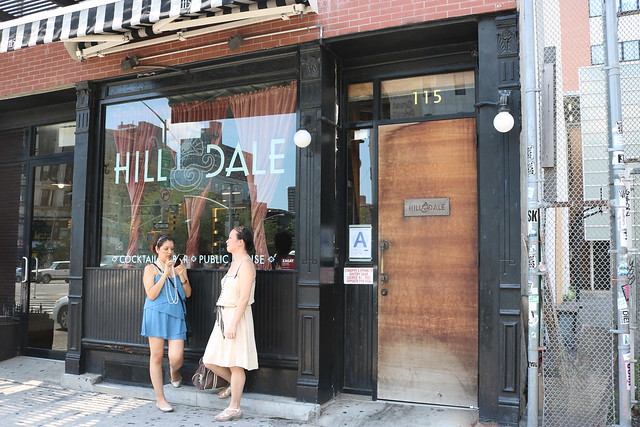 After nearly four years in NYC, our squad has tried most of the cheap bottomless deals across the city, but Hill & Dale’s brunch deal was recently put on my radar. For $35, you receive an entree, side dish, and bottomless mimosas or Bloodys, which is pretty good given its primo Lower East Side location and cute retro ambiance. Normally for that type of price you’re at a nameless restaurant in Hell’s Kitchen. 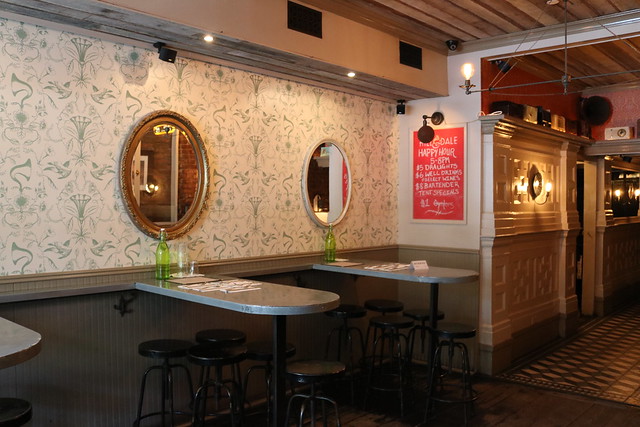 Interestingly, Hill & Dale’s tables don’t serve more than six so we were given access to the back room for our party of 10, which is typically reserved for parties or buffets. I appreciated them accommodating our large party and flagging that the area was more of a living room feel with couches and rugs, rather than a sit down table. This worked out well for our group since a few people floated in late. 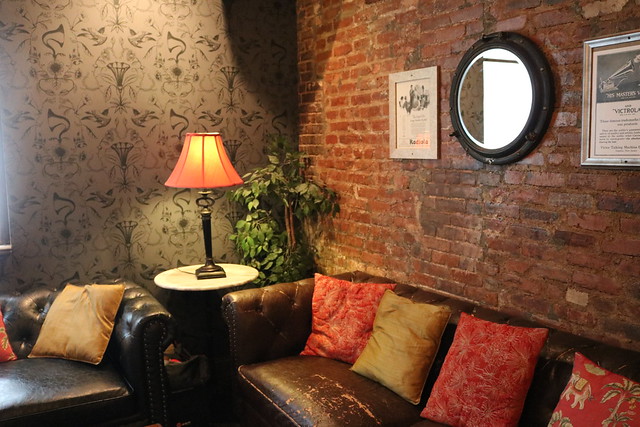 The small restaurant was pretty full with only one server manning the floor, but he quickly served up some carafes of mimosas for the table. We were able to top ourselves off on our own time since he obviously had his hands full with other diners. The mimosas clearly contained fresh squeezed juice since they were quite pulpy, which received mixed reviews from our crowd. They were also served in fancy goblets, earning bonus points from our girl gang. 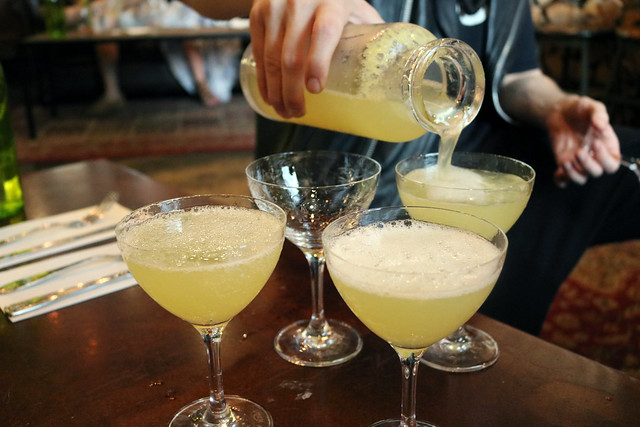 We passed around a few Bloodys, which were well mixed and not too spicy. They went down easy and provided some variation from the bubbles.

So far, our brunch was off to a great spot. We loved the casual couches in the back, the “golden age of recording” theme was charming, and we had drinks in hand quickly. Unfortunately, the brunch went downhill from here. 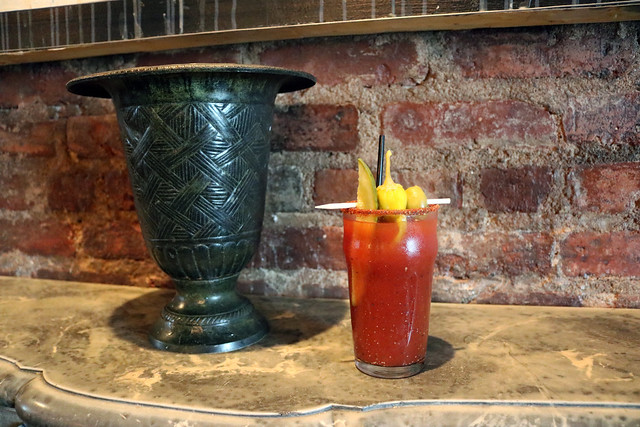 To make a long story short, it took literally two hours for our food to arrive from the kitchen. After 45 minutes, we starting getting antsy, 60 minutes in, we started getting hangry, and 90 minutes in, it was almost upsetting. A few girls in our party almost left without eating because they had plans to make, and hadn’t imagined that brunch would be an all-day affair. Our server, who was hilarious and outgoing, no fault to him, explained that the kitchen was backed up because the entire restaurant’s food orders hit at once and they only had one cook. I’ve worked in restaurants and understood his dilemma, but the diner shouldn’t have to bear the burden of an understaffed establishment.

Alas, finally our food arrived and after this wait, we all agreed it better be the best brunch spread we’ve ever tried. Sadly, it wasn’t. The overall consensus was that it was decent, with some critiques of course, but we were all about to eat our right hands at this point. 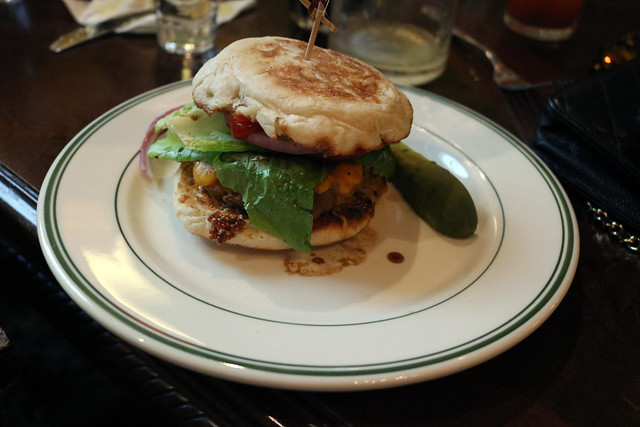 The brunch menu has seven choices, mostly American classics like pancakes and biscuits & gravy. Most of our table ordered the burger, which was fortunate to select such a hearty item given our wait time. All of the girls polished off the burgers and enjoyed their choice. The meat was cooked well and we liked that it was served on an English muffin, low carb…right? 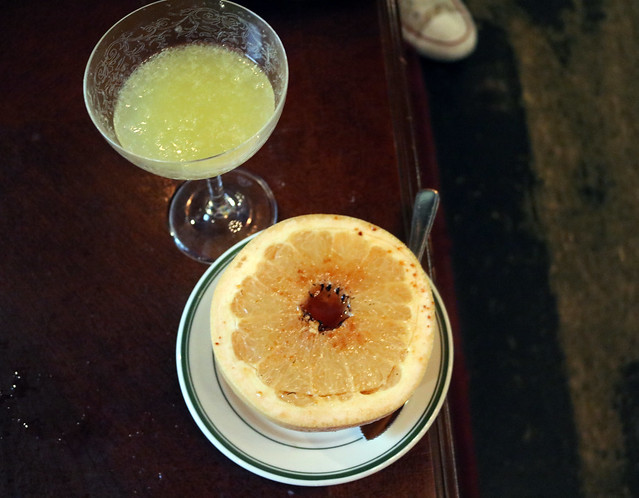 For her side, Molly chose the bruleed grapefruit with sherry. She only made it through a few bites; she found it overfired and way too sticky sweet. 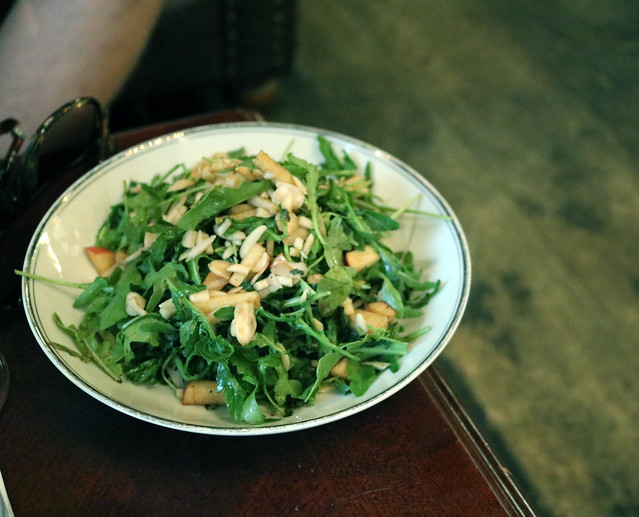 Many of the group tried the side salad, a basic arugula number topped with almonds and fruit. This was a refreshing side and a nice departure from the sad mesclun greens served at other establishments. 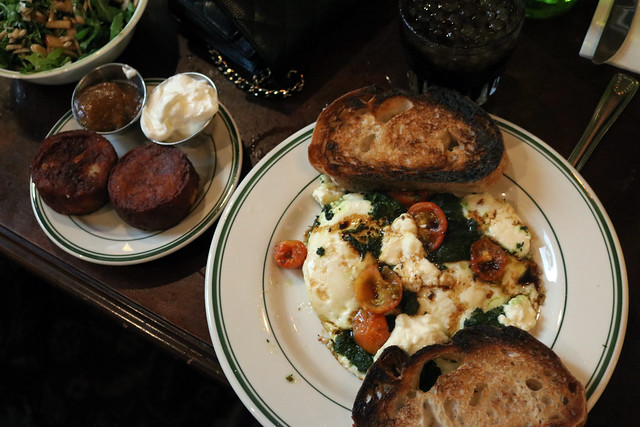 I ordered the baked eggs, which I expected almost shakshuka style in a skillet based on the description. It ended up more like an omelette or a scramble, but I still enjoyed the combination of creamed spinach, ricotta, and roasted tomatoes. I was excited by the truffle vinaigrette, but the truffle flavors ended up lost.

As my side, I selected the hash browns with apple butter and sour cream. My Jewish friends decreed that these were pretty much latkes and we all enjoyed the piping hot fried potatoes with sweet toppings. 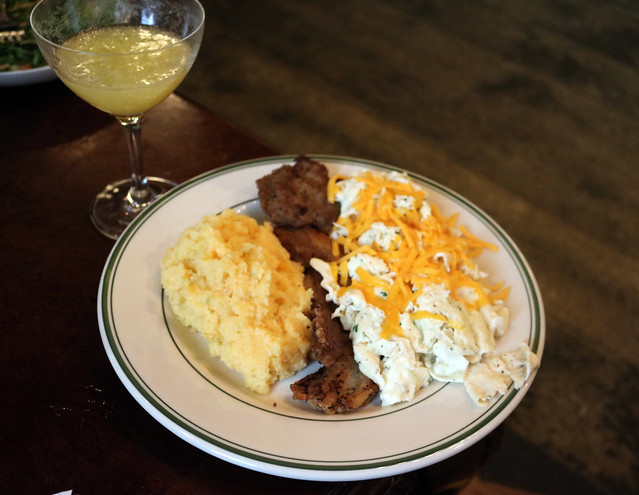 Sondra ordered the Farmer’s Breakfast, served with eggs any style, grits, hash browns, sausage, and bacon. I can attest that the hash browns and grits were tasty, but she found the rest of the plate unpalatable. The bacon was comprised of pure fat in an unappetizing gray color and the cheese looked like it came out of a bag.

On the bright side, we were properly liquored up at this point and enjoying each others’ company. The silver lining of this ordeal was we had plenty of time to chat and enjoy our time together without a rush, albeit with hunger pangs.

The Bitches say: D-. We wanted to love this charming restaurant with a great bottomless deal, but a two hour wait time for (mediocre) food is unacceptable.

Hill & Dale is open for brunch on Saturdays and Sundays beginning at noon.