We’d heard about Hawthorne’s brunch. The restaurant was billed as a brunch for the bros, so I thought this Bitch would be the judge of that. I gathered a crew of eight of the bro-iest gents I could find for a Saturday of masculinity-affirming brunching.

To be fair, Hawthorne is a fairly gender neutral bar. It has a great rooftop that’s perfect for day drinking or enjoying a warm night. I’ve also spent more than a few fall Saturdays there watching my college football team play. (Go Deacs!)

Still, my guy crew took their mission very seriously. The whole table opted in for the bottomless brunch special. The special includes one entree, a shared pastry basket, plus your choice of bottomless mimosas, Bloody Marys, Orange Crush (Svedka vodka, OJ, triple sec, and Sprite), or Bud Light within a two hour limit. Plus, the bar serves up a complimentary cinnamon whiskey (read: Fireball) shot to cap off the meal. For $35.99, it’s a pretty good deal. 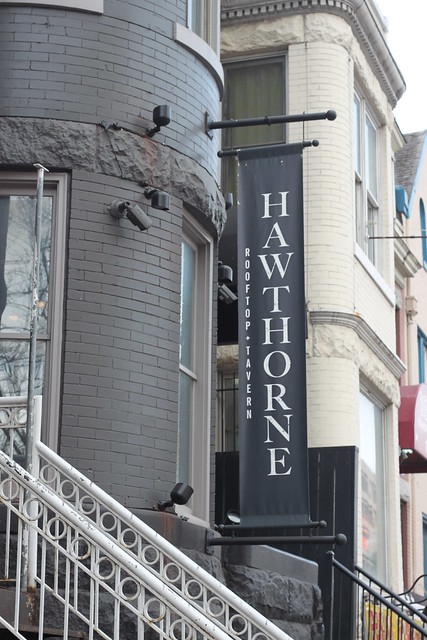 You need to order at least two drinks for the price to be worth it, but everyone seemed up to the challenge. Extra drinks like coffee (from local spot Compass Coffee), juices, and soda, are available a la carte.

I was surprised to learn that Hawthorne serves a mostly Southern-inspired menu. We noshed on an assortment of rather ho-hum muffins (I’m pretty sure they were commercially made) as we perused the menu options. 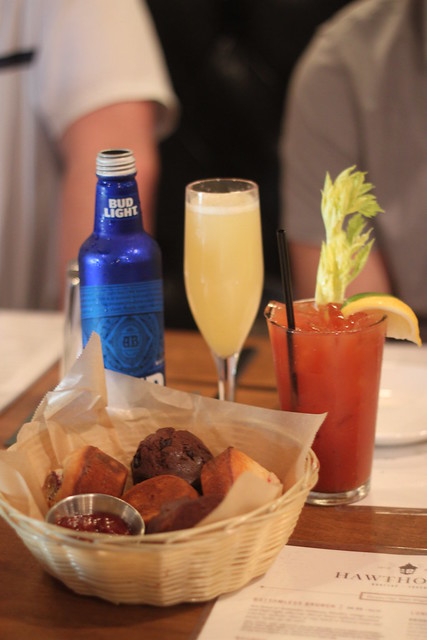 The Southern-style Monte Cristo was the most interesting option, but they were all out at noon.

The Southern-style fried chicken sandwich, a deep fried chicken thigh topped with smoky kale green and garlic aioli on the brioche roll, was a table favorite. The duck fat fries were a hit as well. 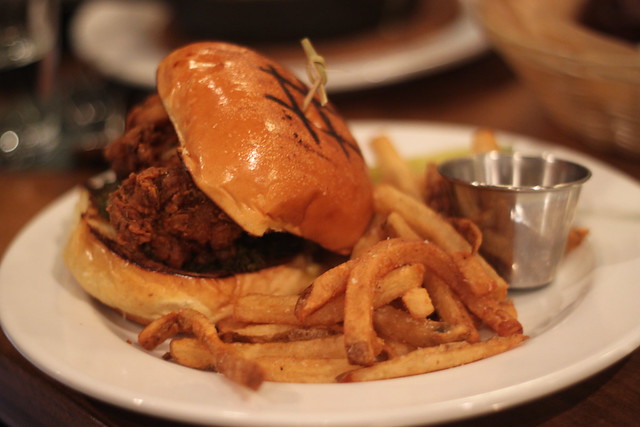 I was with a handful of good ole’ Maryland boys so they were all eager to try the Chesapeake Benedict. The traditional eggs Benny dish had your usual English muffin and perfectly poached eggs, but these also had green tomato, petite crab cakes, and Old Bay Hollandaise. Those crab cakes were not petite, and were quite flavorful. If the locals were won over, I was impressed. 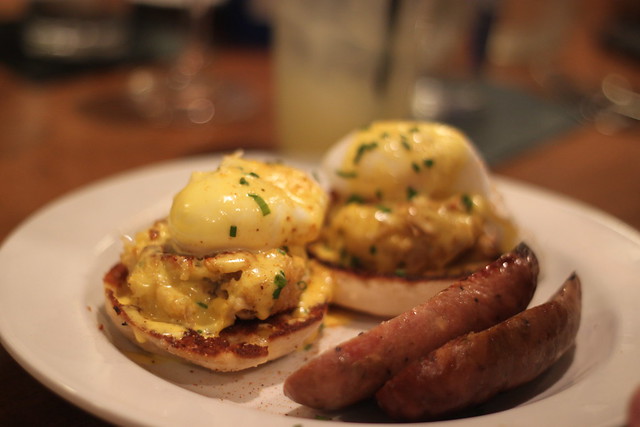 Always as sucker for this combo, I ordered the chicken and waffles. This dish featured a buttermilk fried chicken thigh on a sweet potato waffle with rosemary syrup. The sweet potato waffle was a nice change from than your usual sweet. I like chicken thighs for the juicer meat and fuller flavor but the trade-off comes with it not always being a quality cut of meat. Still, it had a full crisp all over which I appreciated. 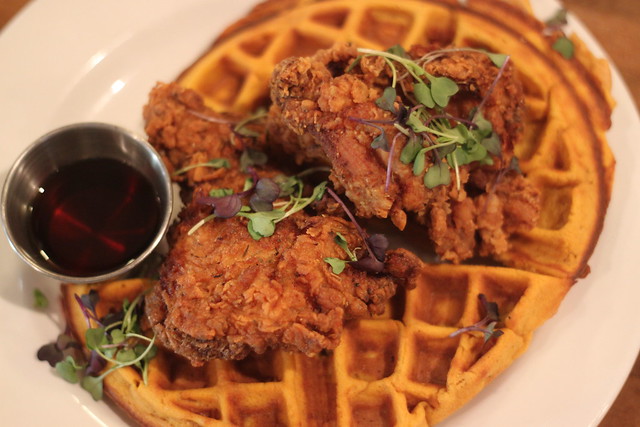 The brisket burger with ground brisket and chuck blend on a brioche roll with lettuce, tomato, onion, and cheddar or American cheese. It was your classic hamburger and did not disappoint. It was accompanied by the longest dill pickle I’ve ever seen and a side salad, in a half-hearted attempt for health. 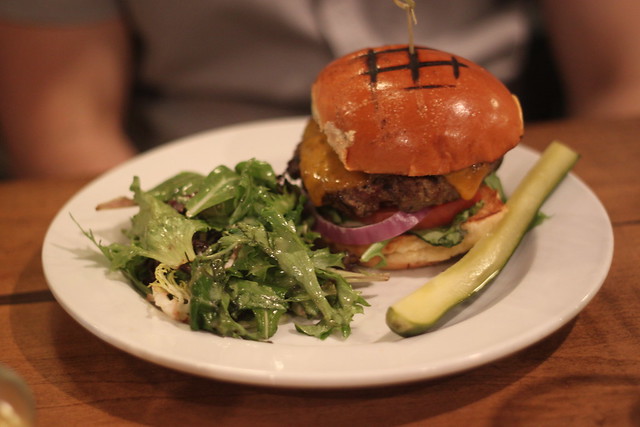 Leave it to my other lone female at the table to try the duck hash. This crispy slow-cooked duck with sweet potato hash, caramelized onions, poached eggs and roasted garlic aioli was a surprise stand out. This hash packs a surprising amount of flavor and comes in a cast iron skillet–very on trend.

I’m pleased to report that service was super attentive. There is nothing worse than ordering bottomless then spending the majority of your two-hour limit waiting for a refill. Our sweet waiter provided us with the mimosa kit so we could refill ourselves. The Bloody Marys were not so thick as to make us full after just two. And the Orange Crush worked for the one guy at the table who actually likes Orange Crushes.

I really appreciated that Hawthorne doesn’t fall into the traps that plague most bottomless brunch places. Between the space for large tables and college basketball games on the TVs, the vibe on the first floor was super bro-friendly. After our ceremonial Fireball shot and another round of drinks, we headed out to bar hop down U Street.

The Bitches say: B+. The bottomless deal, Southern-inspired food, and great service made this brunch Bitch-and bro-approved.