Happy Camper, you are fun and cute, and well, I like you a lot. This weekend Happy Camper in some sorts came to my rescue. My original plans had included checking out a new spot in Old Town that just debuted brunch. Alas, those plans fell through, but fear not because I plan on coming back, despite this weekend’s occurrences.

I will try to remain unbiased, although I arrived at this particular restaurant only to discover that they weren’t serving brunch because they were understaffed due to the Cubs being in the World Series. What? No brunch? But it’s Sunday at 11:30 a.m.! Needless to say, we were bummed.

Having been familiar with most of the brunch offerings in Old Town I was especially bummed because they didn’t seem worthy of a brunch review on this particular day. I wanted something new, not something everyone already knows about. Enter Happy Camper. 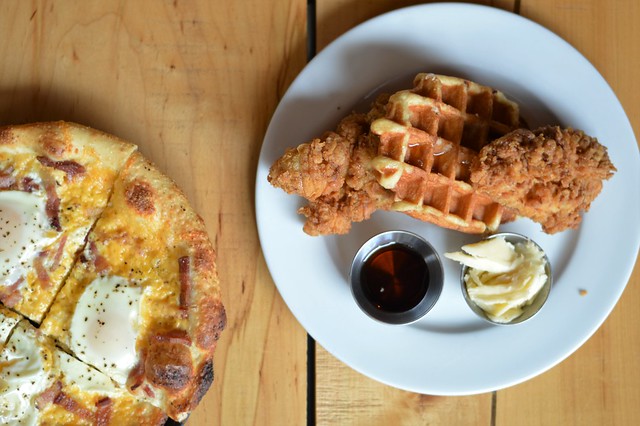 I had completely forgotten that Happy Camper serves brunch. This gem in Old Town, a late night favorite of mine, is known for the lively atmosphere and the awesome pizza, but they are more than deserving for a brunch nod, as well.

We entered the restaurant and found it to be at usual capacity, loud, and bustling with loads of patrons at the bar, tables, and high tops. It wasn’t even noon and this place was packed. Football was on TV and they were playing fun music—I felt at home. 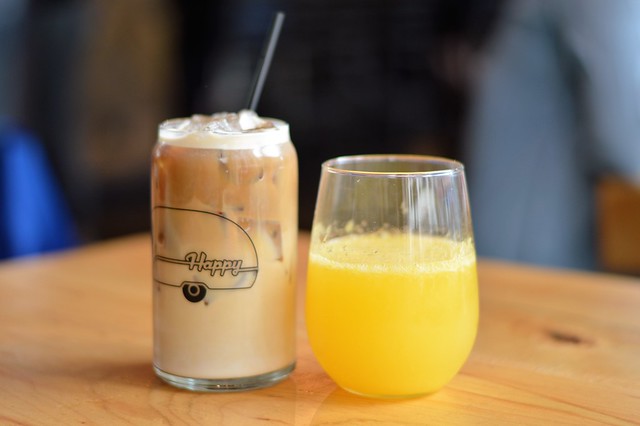 We promptly ordered breakfast cocktails; a usual mimosa for my sister, while I went for the Hangover Coffee. No hangover here, it just sounded delicious. It was a delicious concoction made with vanilla vodka, rum cream, and cold brew coffee served on the rocks. It is very sweet, though—but it was just barely pushing my sweet threshold, but still yummy. 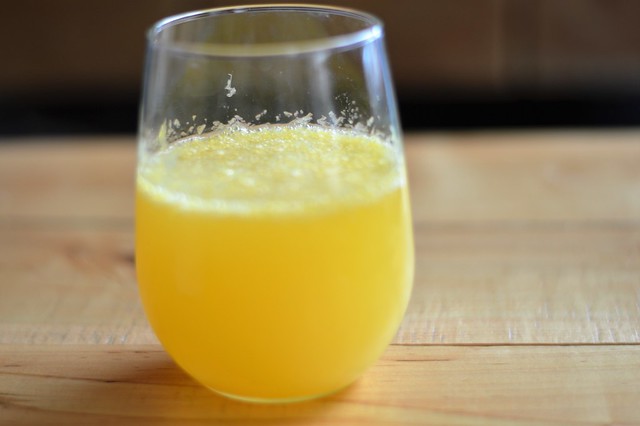 I am pretty sure the restaurant makes the mimosas with fresh squeezed orange juice, which I think is worth mentioning, too. I snuck a sip of my sister’s and it was a fresh burst of pulpy goodness, which I love. 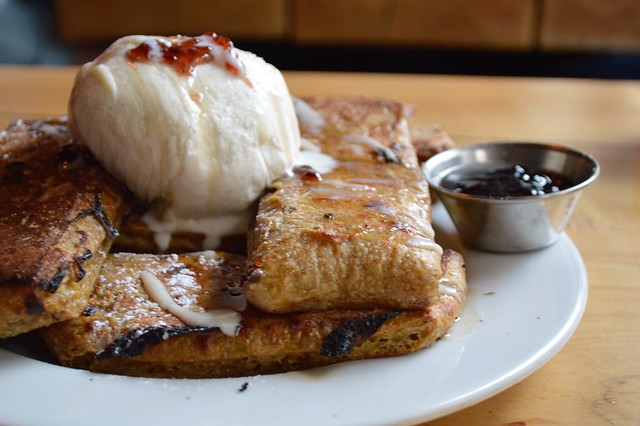 We decided to start with the French toast sticks because, well, why not? We informed our server that once they arrived we would order mains. The sticks came out bigger and thicker than I imagined. I had envisioned long, skinny cinnamon and sugar slathered sticks, but these were more thick cut, because they’re made with pizza dough. 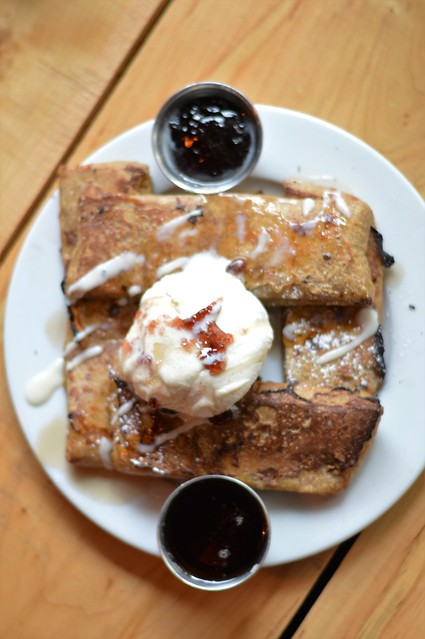 The French toast sticks came with sides of jam and syrup and topped with a big scoop of vanilla ice cream. They were good, but after a few bites my sister and I noted that the texture,thank to the pizza dough, made the sticks a little dry. Lathering on syrup or ice cream wasn’t enough; I soon realized they needed butter to add some moisture. Once I did that, they were  delicious, and we proceeded to eat a dangerously-close-to-clean-plate amount of them. 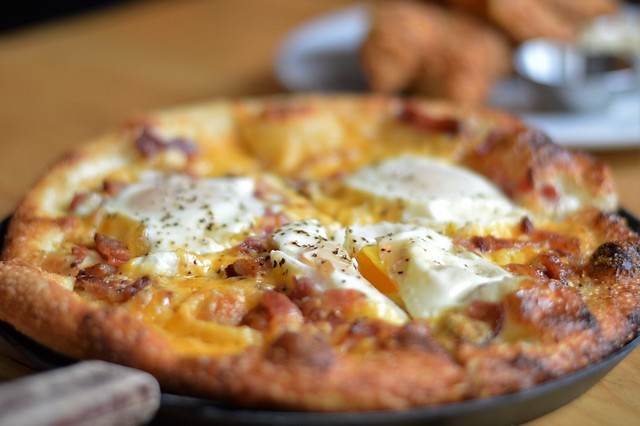 For entrees, I went with the breakfast pizza, while my sister who had been back and forth with decisions, finally chose the chicken and waffles entree after seeing it arrive at the table in front of us. It had looked delicious and crispy, and I was anxious to try it as well, so I was happy with her choice.

My breakfast pizza was topped with bacon, cheddar cheese, and cracked eggs. I had expected the eggs to be over easy, and was looking forward to the yolks oozing out over the pizza, but instead they were almost hard. I think the pizza would have tasted better had the eggs been fried over easy; the cooked yolks made the pizza taste dry. I have had better breakfast pizzas, which is never fun to realize at a spot known for its pizza. 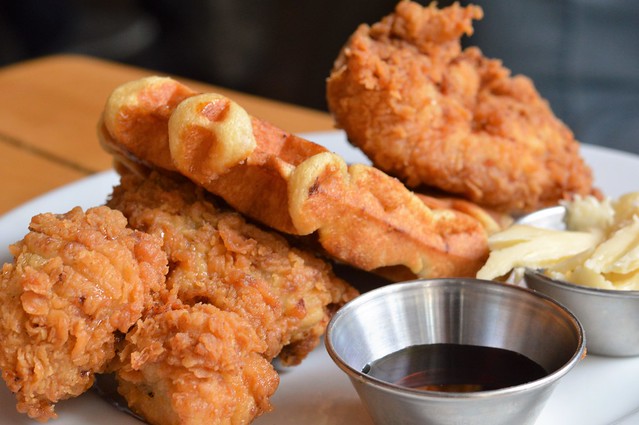 Before her final decision, my sister had inquired about the chicken and waffles, and the server told her they were good, made with all white meat. His answer didn’t quite sell it for me, but the way they looked when they arrived at our neighbor’s table earlier did.

Sadly, the chicken and waffles were a let down. First of all, my sister’s portion of chicken didn’t seem as crisp as the gentleman who had also ordered it. The skin kind of fell off, and it didn’t have as much crunch as we had hoped and anticipated. Additionally, the chicken meat itself appeared to be a combination of both white meat, and fattier dark meat. Something that would not have been a problem for me, but for my strictly-white-meat sister, it was a let down. 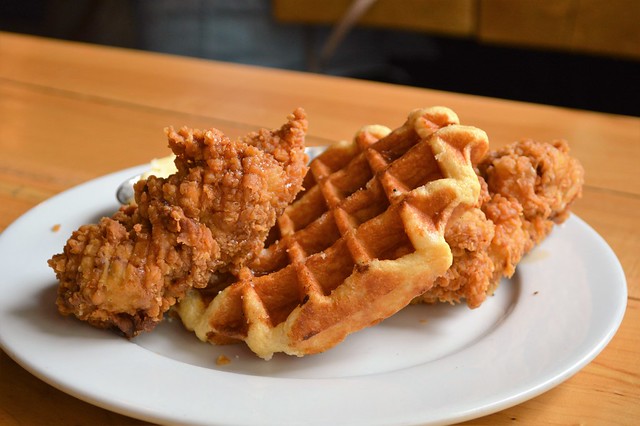 The waffle also is more like a traditional Belgian waffle; the ones that come in packages at 7-11. Super sweet, not as fluffy, and almost with a crystallized sugar coating on it. It was far too sweet for her liking, and not what you imagine with a typical chicken and waffle dish. If they had specified on the menu it is a traditional Belgian waffle, I would have instantly known what the restaurant meant, and it would have deterred us from ordering it, because I am not a fan of those.

In closing, there were a few misses at this brunch, but with the help of cocktails throughout the meal, and the combination of the lively and fun atmosphere, it wasn’t a complete bust. Overall, the meal was fun, just some minor improvements might help. I would eat there again, although I don’t know if I would order the same thing.

The Bitches Say: C+. Come to Happy Camper for brunch for the same reasons you come in the evening; good booze and a fun atmosphere. This spot is a fun place for group gatherings, and is perfect for a hangover brunch when your palate is weak and you just need something to fill your belly.

Happy Camper Serves weekend Brunch every Saturday and Sunday from 10:30 a.m. until 3:00 p.m.