It’s rare that I wake up on a Saturday without a day full of plans. So, when the opportunity to sleep in arose, I took it. By 1 p.m., my boyfriend and I were starving though, so we finally ventured out for brunch. I was looking for a spot in Arlington that wouldn’t need a reservation and served on Saturdays. Foursquare told me to try Green Pig Bistro. Becca gave it a less than stellar review in 2012, but we figured we’d give it another shot.

Located right around the corner from the Container Store (my Mecca) in Clarendon, it was too convenient to pass up. Upon entering, I remarked how the decor nails the farmhouse chic vibe. The mix of wood benches, iron details, and granite counter tops felt polished but homey. Between the natural light streaming in through large windows and barn lanterns, it felt airy and optimistic. I loved the wallpaper and coasters made of recycled old menus. 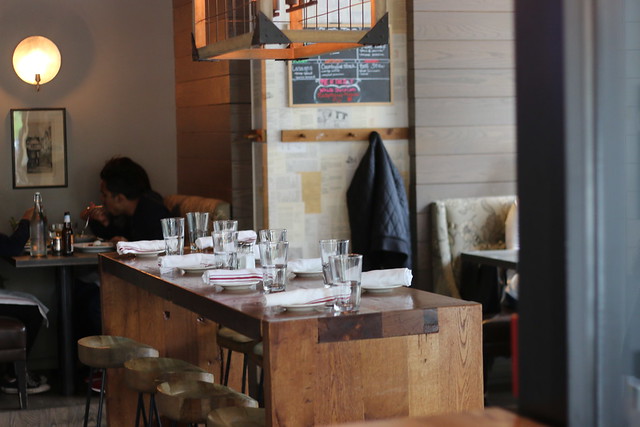 The hostess was very sweet, but couldn’t give us an approximate waiting time due to technical difficulties, so we opted to just sit at the bar. Because we had several bartenders working, service was friendly although a bit sporadic.

We made note of the young, attractive crowd of patrons. One of our bartenders recognized the party of cute twenty-somethings next to us who had been in the night before for dinner and drinks. Clearly, this must be a place worth coming back to. 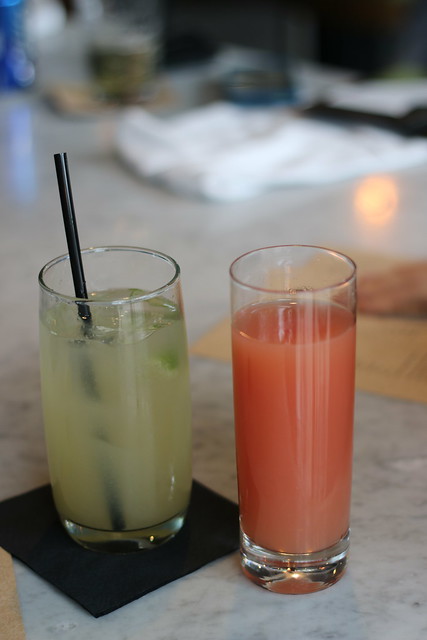 As we had a day of shopping and productivity ahead of us, we decided against imbibing. I ordered a fresh squeezed grapefruit juice and Andrew had the house made ginger brew. The grapefruit juice was the perfect balance of sweet and tart. I immediately downed it and ordered another. The ginger brew was refreshing and would probably make a good hangover cure.

We were both gravitating towards the savory “lunch” portion of the menu, so I knew we needed to start with something sweet. On a whim, I chose the apple cinnamon coffee cake side as an appetizer. 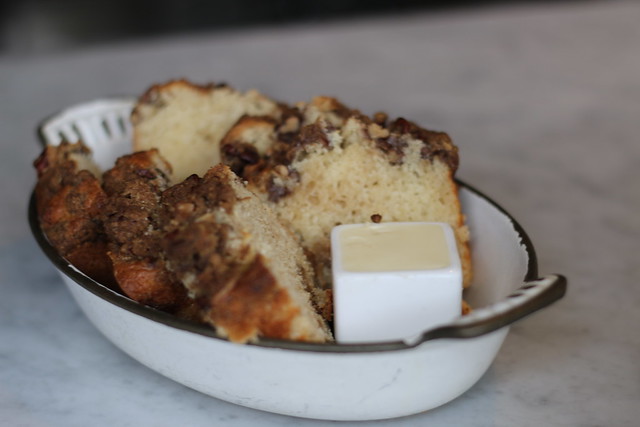 When was the last time you had a good slice of coffee cake? They’re usually dry and terrible. But these six slices of cake were phenomenal. The cake was perfectly moist, with chunks of apple baked in and caramelized pecans on top. It crumbled a bit, but tasted delicious. The generous portion could easily have fed another, and would be good as an appetizer or a dessert. It’s definitely on my list as a Best Bites contender for 2016. 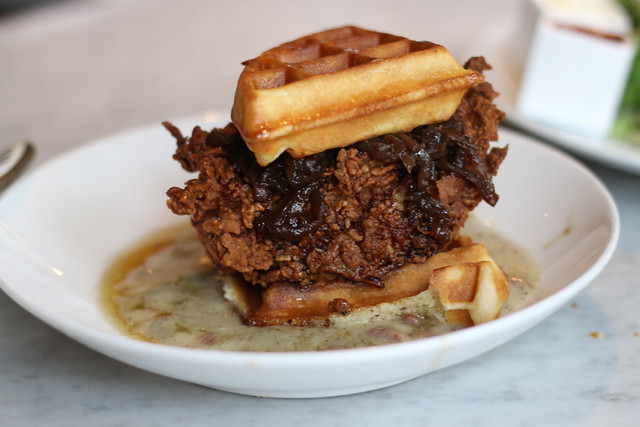 I can’t resist chicken and waffles when I see it on a menu, so naturally I opted for the Angry Bird. The fried chicken was topped with onion jam, sandwiched between waffles, on a bed of sausage gravy. It was beautiful. The fried chicken was perfectly crispy and moist, but the sausage gravy was a bit too oily. With so much thick gravy, I didn’t think the waffles needed syrup—which was unfortunate because the syrup was already on the waffle when it arrived, instead of on the side. Still, the dish was hearty and filling. I was too stuffed to move after eating half of it. 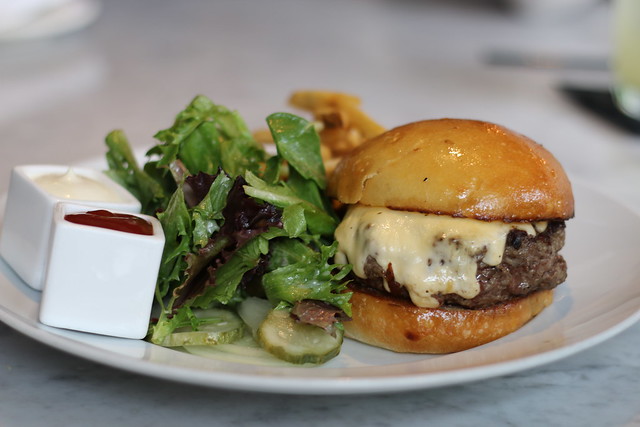 Green Pig Bistro is one of the more stylish places in Arlington. With solid food and a young clientele, it would make a great brunch date spot.

The Bitches say: B. The stylish atmosphere and solid food make this a great option to get away from the bustle of Arlington. Try the cinnamon coffee cake.