When you’re on a trip in a new city with some of your best girlfriends, first thing’s first: brunch. And on our first day in Nashville, that’s exactly what my friends and I had on our minds. Lucky for us, we were staying at an absolutely amazing hotel right in the heart of downtown called 21c Museum Hotel, and they had been nice enough to invite us in for brunch at their restaurant right downstairs. 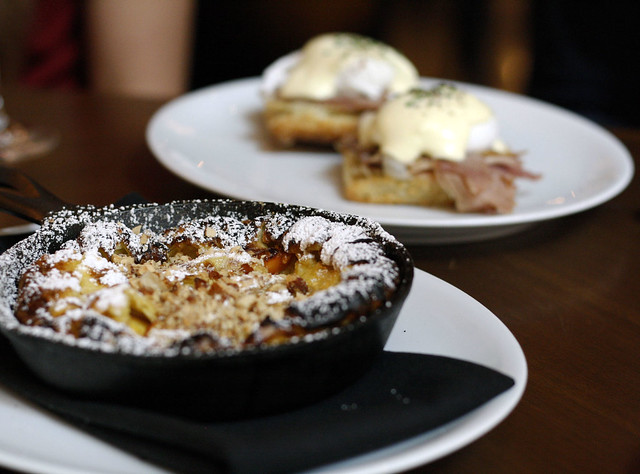 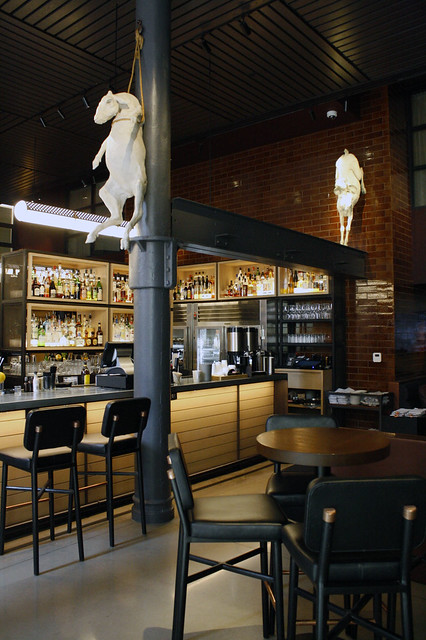 Upon being seated, we were immediately greeted with a massive crystal vessel full of Party Juice, one of Gray & Dudley’s speciality brunch cocktails. With a base of grapefruit-forward rosé and vermouth, this bevvie was topped off with house-made mint syrup and Jarritos. 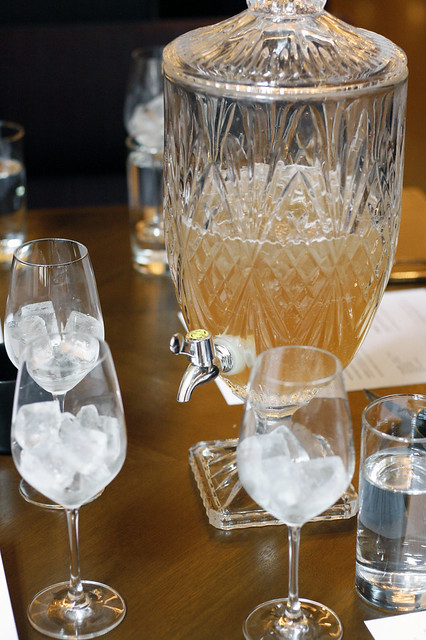 This cocktail was slightly sweet, but really refreshing and very smooth. The grapefruit notes really stood out, as did the vermouth. And we all really enjoyed the self-serve aspect–it definitely helped this Party Juice live up to its name. 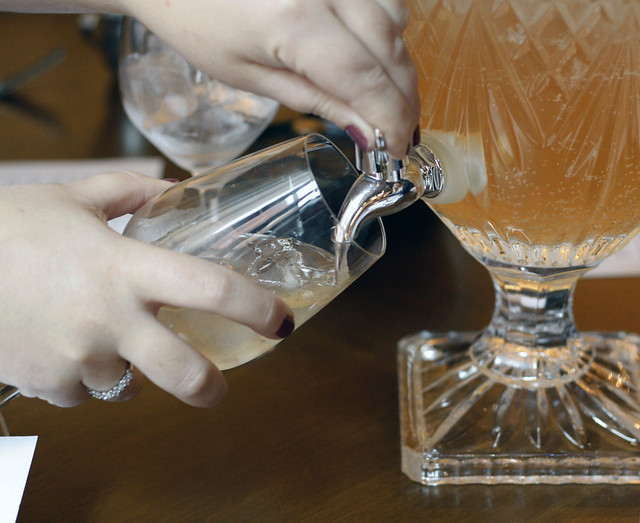 We decided to split a variety of apps and entrees to really get a feel for the menu. First up was the avocado toast, which was topped with summer vegetables, herbs, a soft boiled farm egg, and picked chiles. 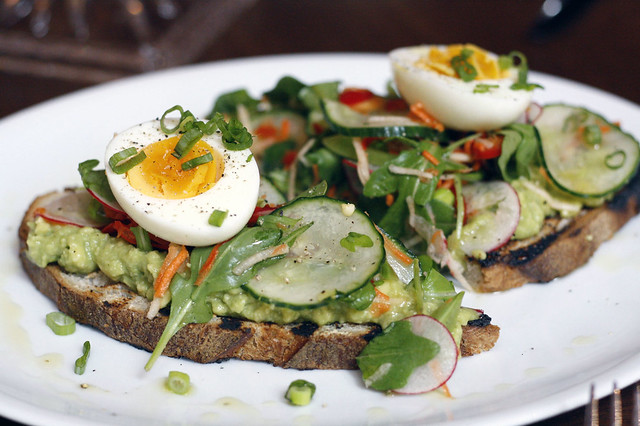 The pickled chiles and cucumbers were a unique twist–something I hadn’t seen on avocado toast before–and the soft-boiled egg and veggies almost made this a salad and avo toast combo. All in all, the flavors meshed well together and this was a very tasty and hearty dish. 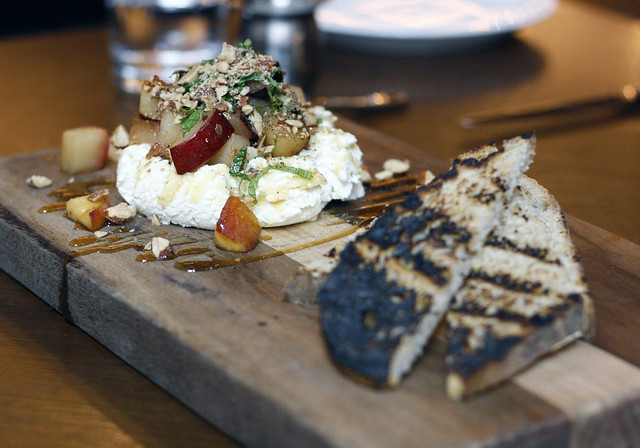 None of us can say no to a cheese platter, so we opted to try the stone fruit & cheese. Sweetgrass Dairy’s Lil’ Moo cheese was topped with plums, peaches, Tennessee honey, almonds, and mint and served with a side of toast points.

The cheese was so creamy and the stone fruit so sweet and fresh, particularly with the chopped mint. It was the perfect balance of sweet and savory without being overpowering. Our only complaint was the toast was slightly too charred, which kind of took away from the other items it was served with. 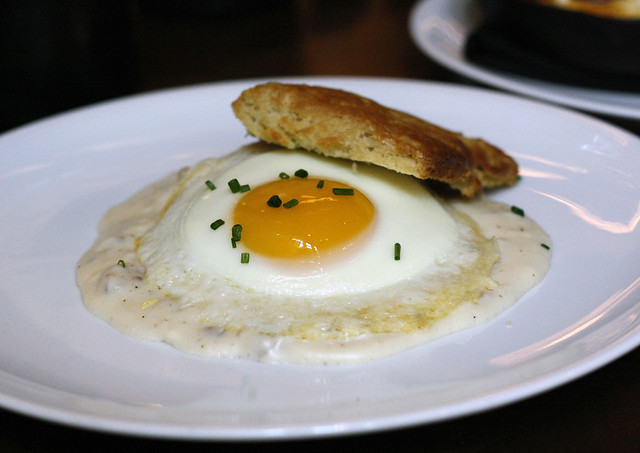 For our entrees, we shared the sausage gravy & biscuit, the El Jefe, the Benedict, and the Dutch baby. The sausage gravy & biscuit, complete with a sunny-side-up egg and pork belly, was far and above Shannon’s favorite. She wished there was a little more gravy, but only because it was so good that she wanted even more. Personally, I could have stood for a little more sausage in the gravy, but this definitely was a great version of a traditional dish. 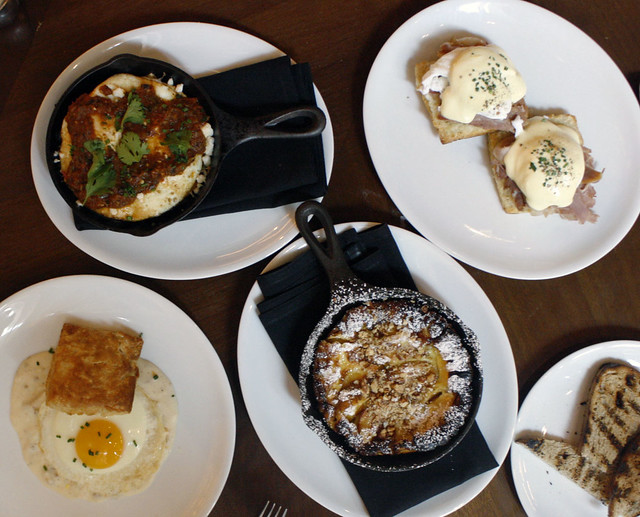 The El Jefe was a unique dish: black beans and eggs were topped with a crispy tortilla, hearth roasted salsa and queso fresco. We all enjoyed the crunch and flavor present in the dish, and found it comparable to chilaquiles. The only downside was it was a little hard to split cleanly amongst a group, but it was more than worth the effort. 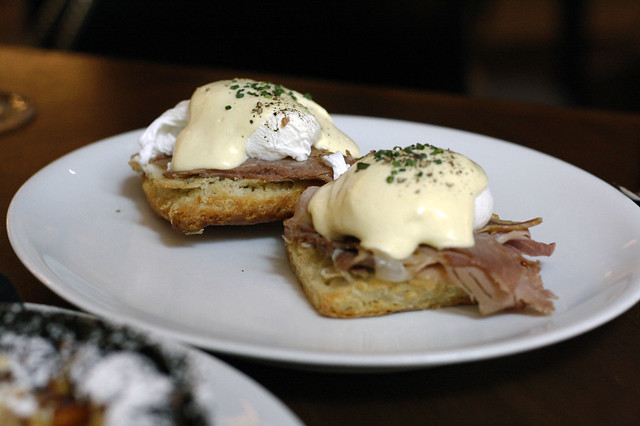 Gray & Dudley’s Benedict may have been the standout of the meal. This Benny consisted of buttermilk biscuits, country ham, poached eggs, and lemon hollandaise.  The saltiness of country ham was perfectly complemented by the lemon hollandaise and the homemade biscuits. Not to mention, the eggs were poached just right. We passed this plate around multiple times until it was wiped clean. 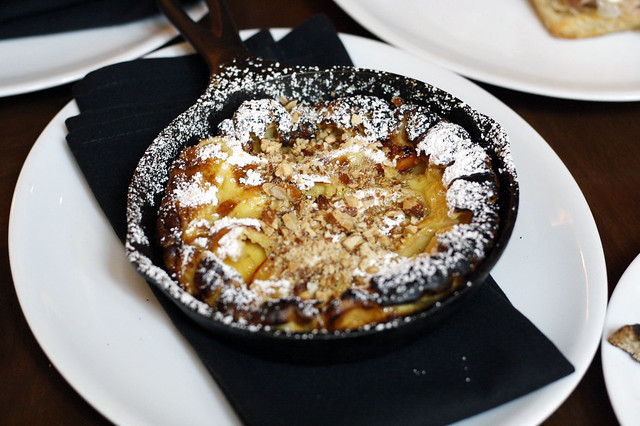 The Bitches say: A. Just because Gray & Dudley is in a hotel, don’t write it off as your average hotel brunch. They put their own, delicious spin on seasonal brunch fare and their cocktails are top notch.

Thanks to Gray & Dudley and 21c Museum Hotel Nashville for having us as a guest for brunch.