On the one rogue weekend in February that was a miraculous 60 degrees in Chicago, I found myself making any excuse to be outside. Whether it was walking instead of taking an Uber, or bunking up on my boyfriend’s rooftop deck, I was trying to soak up as much vitamin D as I could.

Early on Saturday morning, Cameron somehow talked me into getting up early, going with him to the hospital where he works, and work out in the fancy gym while he rounded on patients. I’m not sure how I was convinced to wake up and workout, but it happened!

After my long workout, I met back up with Cameron and we collectively put our efforts into finding a spot to brunch. However, Cameron’s one request: there has to be a TV. Finding a spot with a desirable menu and a television proved to be harder than I thought. 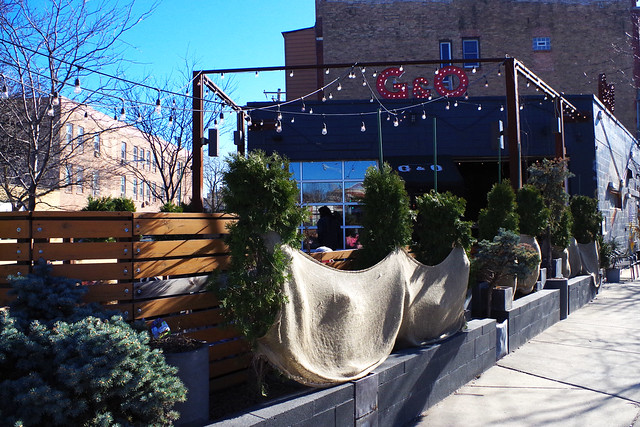 As we drove back to the city, we brainstormed on where to go and ultimately I landed on Grand & Ogden after a Google search. Grand & Ogden’s menu looked delicious, so he and I took a chance and found parking near the restaurant. 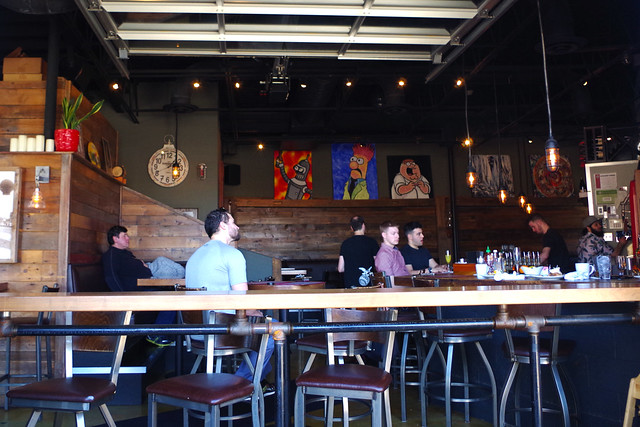 As its name suggests, Grand & Ogden is on the corner of Grand Avenue and Ogden Avenue, in West Town. Grand & Ogden is a small, industrial space with a patio, and large retractable garage doors, offering lots of light and on this beautiful day, just the right amount of breeze into the restaurant. I was wanting to sit on the patio, but Cameron wanted to be inside and watch the Kansas basketball game. Thankfully, these retractable doors offered the perfect compromise and we snagged a hightop table near the bar.

As Cameron and I settled up on our table, we were greeted by the waiter and manager of the restaurant. He brought us menus, and offered us drinks. Cameron and I both opted for some libations, we had to soak in the beautiful weather with a cocktail in hand. 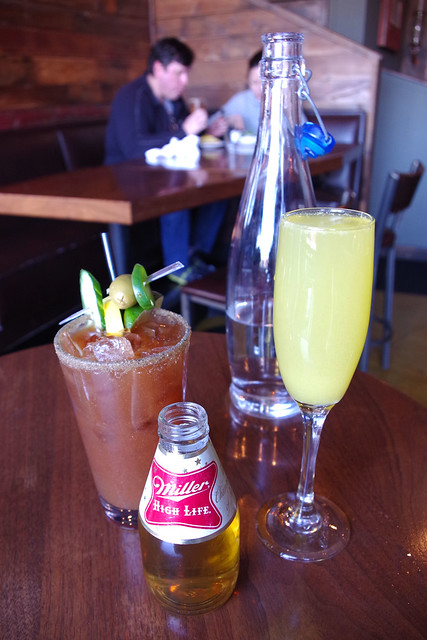 Cameron decided to go with a Bloody Mary with a beer back. The Bloody came with a horseradish-spiced rim. The beverage was spicy, flavorful, and had a nice texture and thickness. Often times my biggest complaint is Bloody Marys are too thin and watery but this one was just right.

I decided to try a classic mimosa with orange juice and Champagne. It was a delicious concoction of bubbles and juice and I found the drink to be refreshing and delicious.

Next up were entrees and Cameron had been eyeing the chicken and waffles from the beginning. I decided to let him have that one with the understanding that I had to have a couple bites. 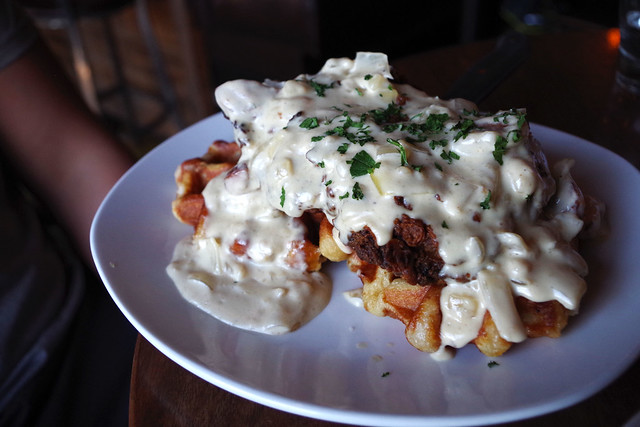 The chicken and waffles came out as two Belgian waffles topped with two chicken thighs and andouille sausage gravy. Now, when this dish first came out, it looked none too appetizing, but let me tell you, it’s epic. The waffles have a funnel cake texture and flavor. The gravy has candied bacon bits tossed in that add a sweet crunch to the dish. The chicken was perfectly fried, and I must say, I was thoroughly impressed by this dish. (Truth be told, only two weeks after this brunch, I went back with Cameron and his roommate, and we had the chicken and waffles again! It was that good.) 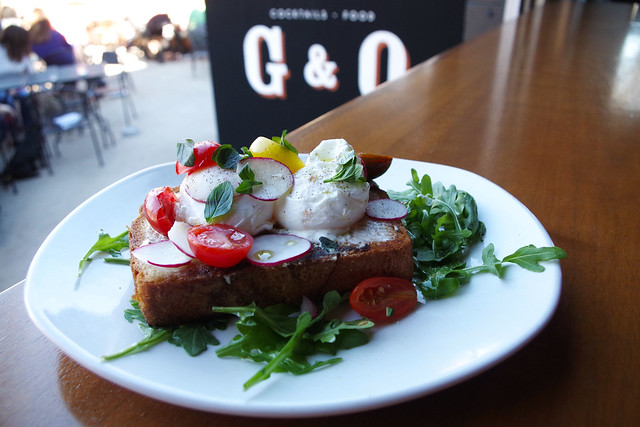 I decided to go with something lighter than the chicken and waffles. After perusing the menu, the G & O toast caught my eye. The toast was thickly sliced Brioche bread with herb goat cheese, heirloom tomatoes, two poached eggs, raw radishes, olive oil, maldon, and cracked black pepper. It was a delicious fresh option, and I almost licked the plate clean. The bread was just toasted enough, and still soft but crispy. The heirloom tomatoes were light, and the creamy goat cheese complimented the poached eggs. I couldn’t of asked for a better dish to cap off this beautiful Saturday. 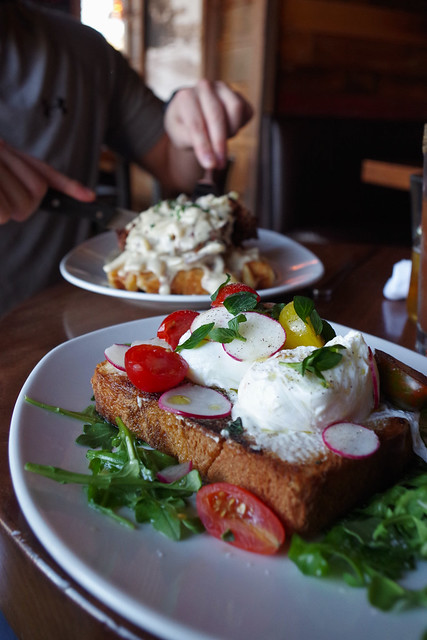 Grand & Ogden proved to be an excellent choice for brunch, and I am so happy we happened on this spot. While Grand & Ogden isn’t in my neck of the woods, I am more than happy to make the trek to go back for more of the delicious food.

The Bitches say: A+. From the stellar service, to the delicious food, Grand & Ogden may be oddly located but it is absolutely worth visiting.