D.C.’s first Korean barbecue restaurant has touched down right in the middle of U Street. It’s hard to believe we hadn’t been riding this interactive food trend sooner, but that’s all the more reason to check out Gogi Yogi, which was opened by our creative and entrepreneurial homies from Duke’s Grocery. There was no doubt that this place would be a hip, happening hangout in no time, but when we heard they launched brunch we needed to see how it would match up to Duke’s – probably this city’s most reliable, low maintenance brunch establishment. 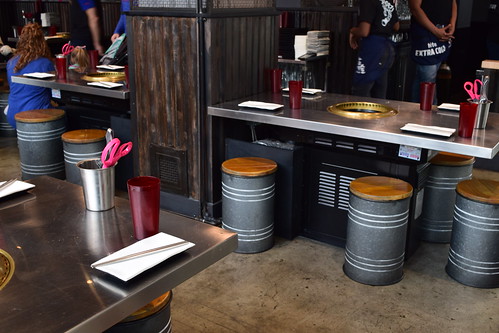 The interior is airy with tall ceilings and bright windows, though it’s not as big as it appears to be on the outside. Street art and graffiti designs line the dark-toned walls, complemented by trash-can-esque aluminum seats and accents. All this noted, Gogi Yogi is not your authentic representation of Korean barbecue, but it definitely has all the bells and whistles to make for a good time. 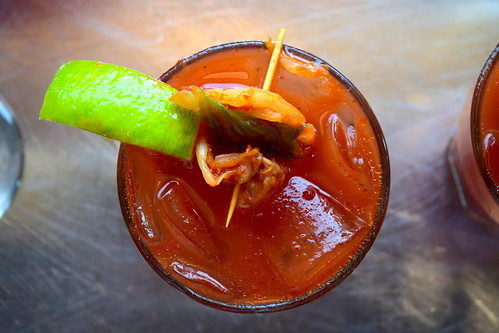 The brunch menu is currently small, but you can order some other grill and kitchen options à la carte as well. They offer bottomless kimchi bloody Marys and classic mimosas, of which we ordered along with a specialty cocktail, the “Hongdae hustler.” 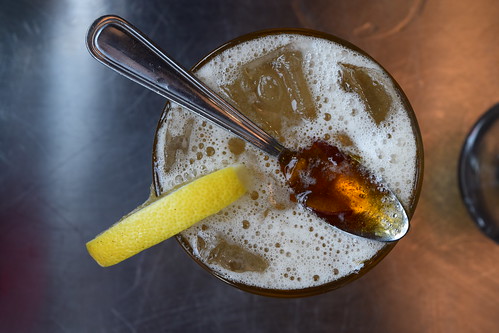 Offering a kimchi bloody is a great idea. The spice, the acid, the crunch, the funk; it’s a bloody perfect match. We found the ratio overwhelmingly acidic and watery for the short and stout glass it was served in, but they’re onto something. The Hongdae hustler is concocted with Bardstown 90 Proof Bourbon, jujube marmalade, Angostura bitters, lemon, and simple syrup. A sweeter, more lemony bourbon cocktail, this drink was fortifying, but refreshing-and a great pair for the fire-y flavors that come along with Korean bbq. While the cocktails are great, we implore you to take a step towards tradition and cradle a cup of a non-alcoholic beverage. They’ve nailed the Korean tea offerings with various types of green teas, peanut teas, and unique juices. 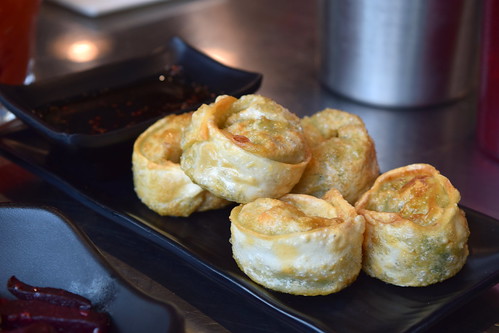 Before we embraced all four brunch offerings, we ordered mandu, bibimbap, and grilled veggies. Mandu is a tortellini shaped fried dumpling served with a soy sauce. The dumplings were great for sharing and the stringy mixed cabbage interior was moist and tender. The thick, crispy shell was deep-fried rather than pan-fried and made us feel like we were eating spring rolls rather than dumplings. 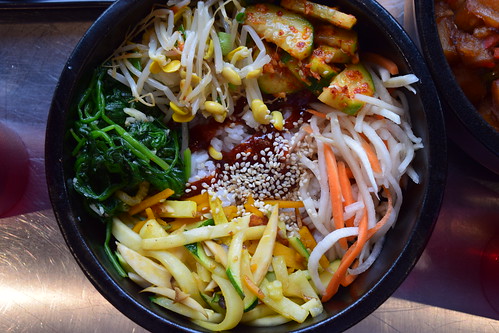 Bibimbap is a Korean dish many Americans fancy. Koreans were ahead of the grain bowl movement before health-foods concepts put quinoa and avocado bowls under everything. Perfect, sticky white rice, bean sprouts, kimchi, pickled vegetables, and a fried egg create the ultimate blend of fresh flavors with an appreciated weight of substance. Fair warning: this dish is spicy. You know, the “it’s so spicy it looks like you’re wearing lipstick” type of spicy. 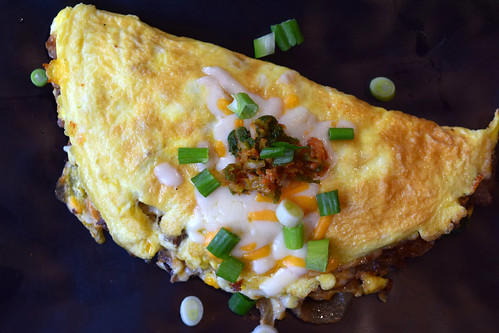 A bulgogi omelet is the hangover breakfast we never could have dreamt up. Glutinous in all it’s glory, this omelet is delicious. Inside the thick envelope of skillet-cooked eggs is marinated ribeye with onions, peppers, minced kimchi, and mozzarella. The tender, milky mozzarella mixed with the salty, acidic profile of the meat and kimchi is a fusion we won’t soon forget. 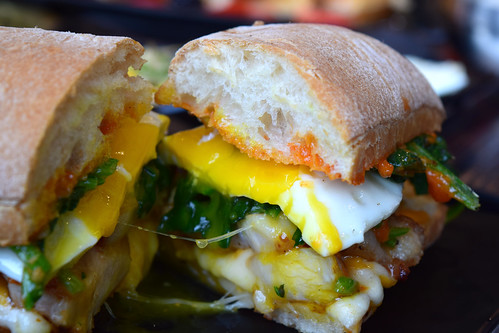 Restaurants are pushing boundaries for egg sandwiches, with many introducing ingredients like pork belly. The Gogi Yogi egg sandwich includes thick-cut pork belly, along with seasoned spinach, an over-easy egg, cheddar cheese, and gochujang aioli served on fresh ciabatta. The soft bread soaked up the messy oil, fat, and sauce in the most elegant of ways, but the pork belly had a layer of fat that we found just a bit too decadent. 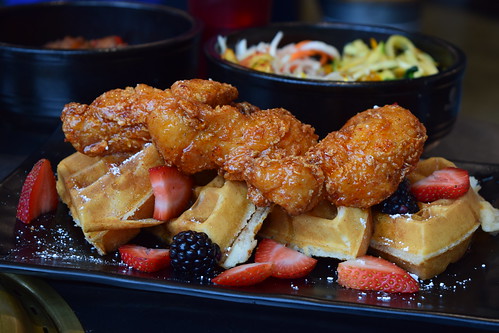 Fried chicken and waffles don’t need much to be considered amazing. The requirements are as simple as a good waffle and a great piece of fried chicken with a piney maple syrup to glue the gang together. Korean fried chicken differs from the southern classic in that it’s fried twice to be dry, crispy, and obtain an almost transparent skin. The Gogi Yogi Korean fried chicken and waffles have added criteria for evaluation: a sweet and spicy marinade. Garnished with berries and syrup, the dish didn’t need any additional sweetness, but the fried chicken felt like a cornmeal-dipped chicken tender we could find at the grocery store. The overall composition was well-rounded bite for bite, but alone, each constituent fell flat. 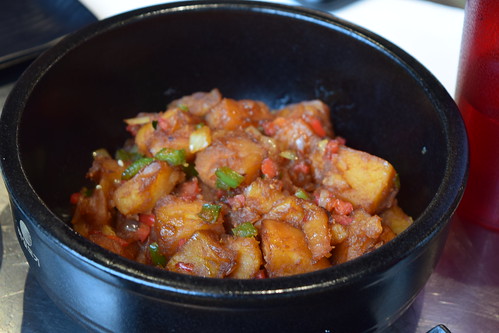 The shoyu hash was served in a deep basined bowl. Sautéed potatoes were supported by onions, bell peppers, and an over-easy egg (we ordered ours on the side). This dish seemed like a take on the familiar griddle-cooked diner potatoes we love so much but spicier. We’d really like to see a hash added to the mix of brunch options, which amped up the breakfast vibes of the bbq meats.  This dish is best passed around with a group rather than owned as an entrée, so plan on sharing.

The menu is small (as of now), but the food packs a punch.