French cooking is gloriously decadent; probably because it’s heavily centered around butter, cheese, and wine – so what’s not to love? So, when I was invited to sample Gaslight’s revamped brunch menu, I excitedly said “oui!” to this brasserie du coin (brasserie on the corner) in Boston’s South End.

I rarely drive in the city, but Gaslight’s free validated parking incentivized me to take the Volvo out for a spin. As I neared the restaurant in the South End’s SoWa (South of Washington) district, I noticed this area had a massive facelift since the last time I had been there. It reminds me of New York City’s eclectic Chelsea neighborhood with art galleries, boutiques, and open markets. 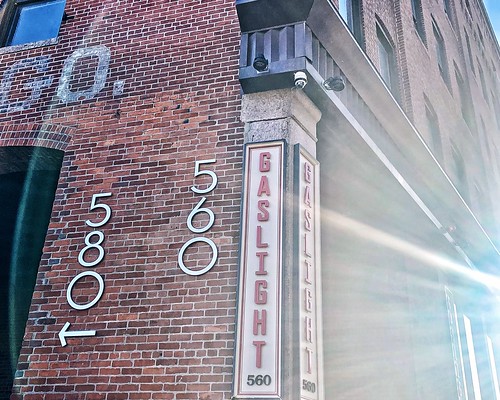 My friend Alana met me at Gaslight’s industrial brick building, and although the restaurant was located below street level, it felt far from cavernous. The friendly staff whisked us past a silver curved bar into a room with white tiled walls, French marble top bistro tables, and elevated windows.  The atmosphere was vibrant and almost every table was full of fellow brunch-goers of all ages. 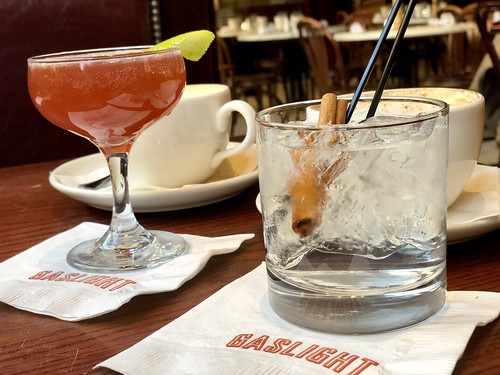 The new brunch menu looked incredible, with the right-hand side dedicated to cleverly named hangover cocktails (because the best way to cure a hangover is, of course, by drinking more alcohol). If you loved Cinnamon Toast Crunch as a kid, Gaslight’s new “cinnamon toast brunch” tequila drink is for you. If you only consume tequila by masking it with salt and lime, the “drew ‘berry’ more” is a safer choice, as the rum is subdued by prominent berry and citrus flavors. We rounded out our drink order with two lattes and our waitress agreeably customized one with almond milk. 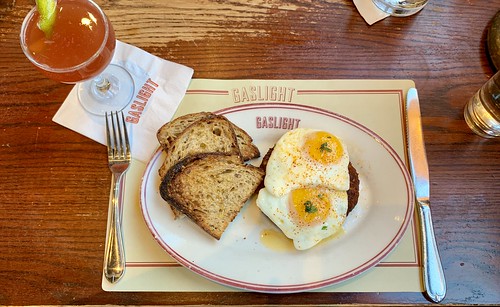 The chef took the reins from here and we were served the Berkshire pork hache and the smoked salmon Benedict to start. In the hash, confit’ed pieces of pork shoulder were shredded with potatoes and griddled into a crispy, salty patty on a bed of house-made chili vinaigrette. It was topped with two sunny eggs, and we used the toast on the side to create an open-faced sandwich. Alana and I would have scoffed if you told us pork hash would be our favorite dish, but we both agreed that this mixture of flavors and textures was très, très bien. 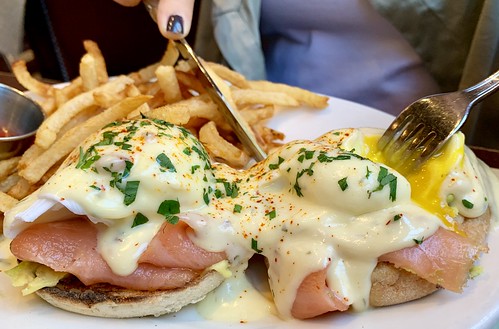 The generously portioned Benedict was glammed up with avocado, house-smoked salmon, and a smothering of rich Béarnaise sauce. I personally prefer Benedicts with ham, which they also have on the menu, but Alana welcomed my extra salmon slices for the ultimate brunch indulgence. 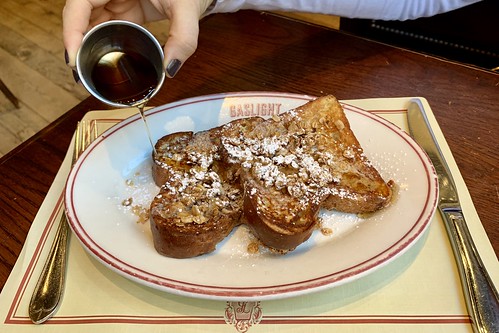 Next came the French toast and the “le hamburger Philippe.” The French toast was perfectly crispy around the edges, yet custardy in the center and topped with vanilla butter and maple bacon granola for a sweet and savory crunch. This delightful dish is also part of their prix fixe brunch menu served on weekends for only $11.95; an incredible value IMHO. 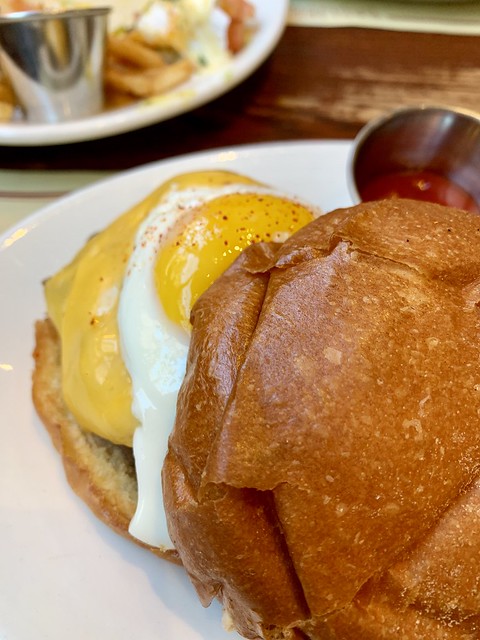 If you pair “le hamburger Philippe” with one of the cocktails, Alana and I can assure you you’d kick any hangover. The juicy burger with lashings of cheese, braised short rib, and fried egg on a buttery brioche bun is an instant cure-all, and it’s served with a heaping mound of frites on the side.

Alana and I left Gaslight feeling a little more French and a lot more full.

Gaslight in Boston’s South End has been a French staple for years. As for their new brunch menu with hangover cocktails and inventive dishes? C’est magnifique!