When I saw a sign for “coming soon, The G.O.A.T,” I couldn’t help but laugh at the fact that the millennials are truly taking over. The G.O.A.T in Clarendon sits right next to some of our favorite brunch spots, like Ambar and Cava Mezze. When we heard this new sports bar was serving brunch, we were intrigued and hoping it actually would be the “Greatest Of All Time.”

Entering the restaurant with friends on a Saturday morning after a night of drinking was pretty rough considering all the macho men were already getting their drink on for the day’s NFL games. The place was lively, clean, and definitely had one too many screens.

We were seated upstairs and very content with the atmosphere. Although it was a bar scene, there was something childish and playful about the interior reminding us that D.C. brunch doesn’t always need to be a fancy affair.

The drink menu shocked us, as the drinks were pretty pricey compared to some of our other brunches. We ordered one signature smoked cocktail, a mimosa, and a Bloody Mary. 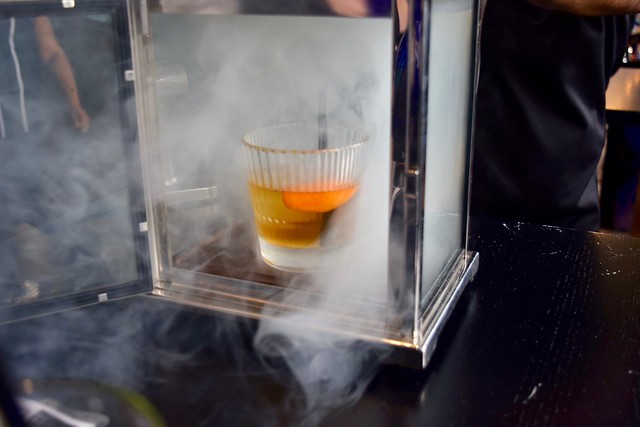 We had no idea what we were getting ourselves into with these cocktails. The smoked whisky cocktail was no joke. They literally put the cocktail in a glass chamber for smoking right beside the table. Although this probably didn’t fit with the bar aesthetic, my friends and I loved the entertainment aspect. 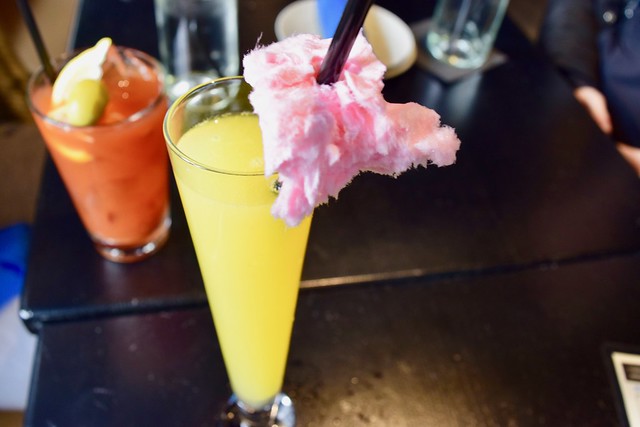 The mimosa and Bloody Mary came shortly after, and we were yet again in for a surprise. This mimosa was by far the biggest one we’ve ever seen. In a huge flute glass, the drink was filled to the brim and topped with a piece of cotton candy. Non-traditional, but memorable. The Bloody Mary was spicy and delicious, and not too strong. This was a good thing today, because I don’t know how much more alcohol flavor I could have handled. 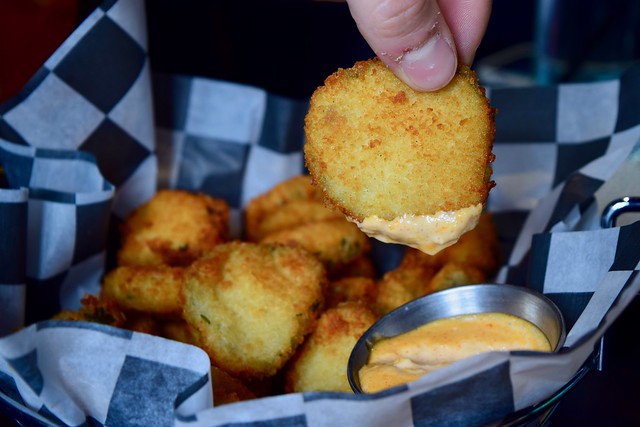 As we readied to order our food, we all had the same idea: a brunch at a bar means bar appetizers. It’s only natural, right? So, we set about ordering wings, fried pickles, fried mozzarella, and pork belly sliders. This was probably overkill, but there were so many enticing options, we just needed to indulge. 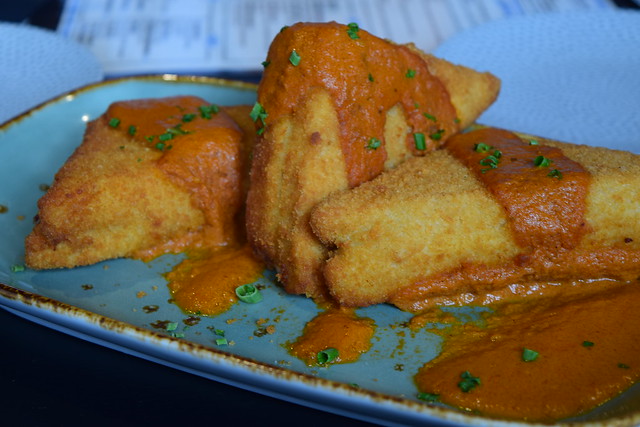 The fried stuff came out first and we all dove in a little too quickly. I have to say, I was pretty impressed. While all fried foods are on a rather even playing field, the mozzarella and fried pickles were perfectly cooked.

The dishes were crunchy and accompanied by unique sauces, a spicy aioli with the pickles, and blush marinara sauce with the mozzarella. The food was heavy and hearty, but ideal for sharing. 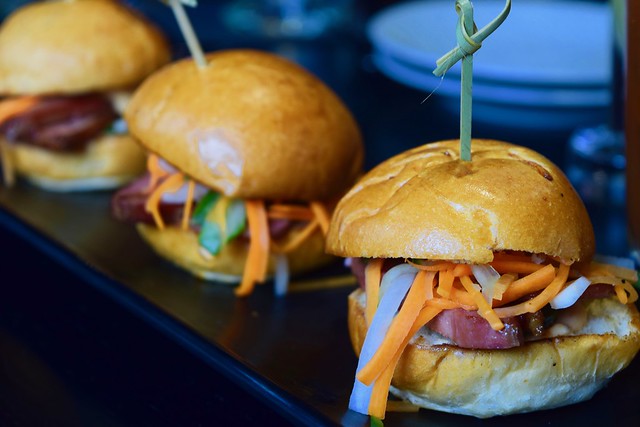 The wings and pork belly came to the table shortly after. We highly recommend the pork belly sliders — we were sad to see them end. High-quality meat cooked perfectly is a beautiful thing. The wings, however, weren’t as impressive. 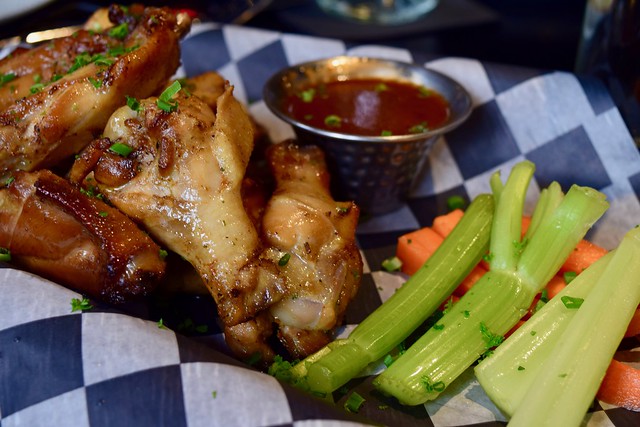 It could have been because we got them smoked, but the wings were slightly chewy and fatty. We could have done without these, which is disappointing considering wings are a staple bar food.

Alright, enough messing around, onto the brunch foods. I ordered the omelet, my friend Morgan ordered the breakfast sandwich, and Katie ordered the chicken and waffles. 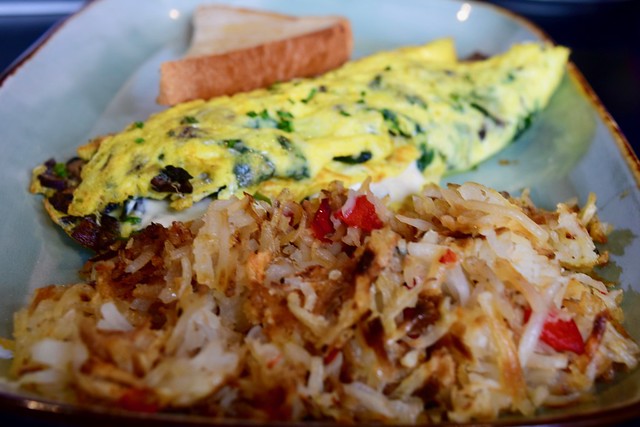 My omelet was very flavorful, but slightly cold, so the cheese wasn’t melted any more. The side of hash browns were a nice touch, but it only came with half a piece of toast, and it was white bread. I know many don’t mind it white bread, but good toast is a high priority on my list of brunch criteria. 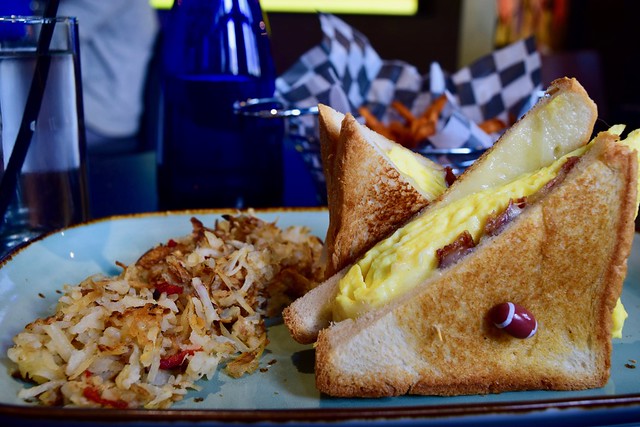 Morgan’s breakfast sandwich also came on white bread, but it was loaded with cheese, and fluffy eggs, so she was pleased. The sandwich was a good portion size, but needed some sort of dipping sauce —which could have easily been remedied by dipping in ketchup and hot sauce. 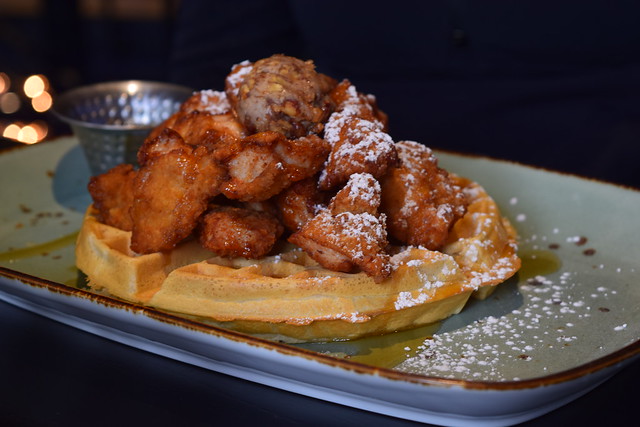 The chicken and waffles hit the table and were presented beautifully. Piled high with chicken off the bone, this dish was ready for Katie to jump in. The chicken was cooked very well and it wasn’t overly deep fried. The waffle was a little dense, but it went well with the light chicken and a buttery nut spread that was scooped on top. We all had to steal a bite of this dish. 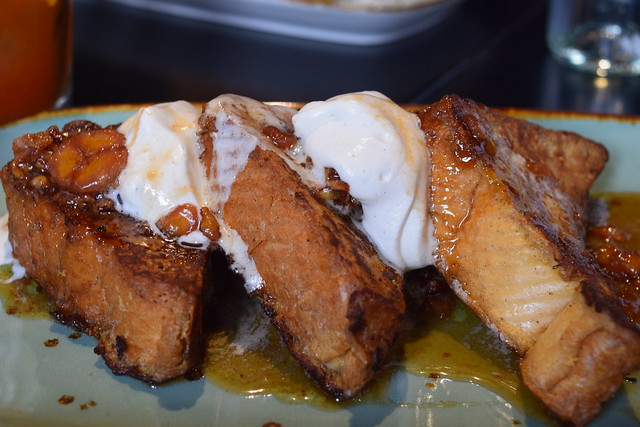 For those of you who are loyal to my reviews, you know I need to end brunch with French toast. The G.O.A.T’s French toast was great.  Crispy outside, soft and chewy inside, and accompanied by fresh ice cream, this French toast was top notch. I mean, just look at those slices of fluffy French bread.

The Bitches say: B+. Our buttons were bursting and we were in a full-on food coma. This is an awesome spot for bros, football games, beers, and heavy brunching. The food was nothing exemplary or out of the ordinary, but a massive table of classic brunch items is always enjoyable in our book.