My dear friend, Ali, moved to Chicago after graduating from law school with her boyfriend, Adam. Ali and I routinely talk about going to Frasca Pizzeria and Wine bar for brunch, and finally made plans on Saturday morning to do so.

Frasca Pizzeria and Wine Bar, right near the Paulina Brown line stop, is a sister restaurant of Dunlays on Clark, Crosby’s Kitchen, The Smoke Daddy, and a few other popular restaurants on the north side of Chicago.

I arrived at Frasca a bit before Ali and Adam, and had a chance to take in the simple interior decor, with the bar being the at the center of the restaurant. It is also a dimly lit restaurant, and is cozy, and casual.

Ali and Adam arrived shortly after I did, and after some convincing of the staff, I got us closer to the windows up front—I will stop short of nothing for great photos. 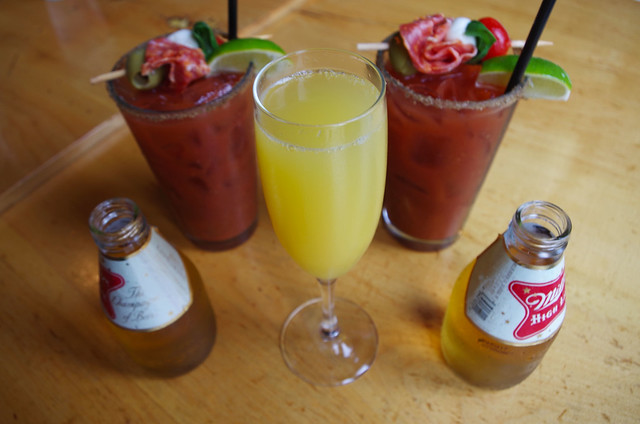 To start us off, we decided some bubbly and strong libations were in order. All three of us opted for drinks; Ali and Adam chose Bloody Marys and I chose a mimosa. The Bloody Marys came with beer backs, exactly how a Bloody Mary should be. The Bloodys were strong, flavorful, and spicy.

My mimosa was exactly the right ratio of prosecco and orange juice. There is nothing worse than an overly juicy mimosa, and Frasca knows how to pour a good one—even if the drinks took some time getting to us. 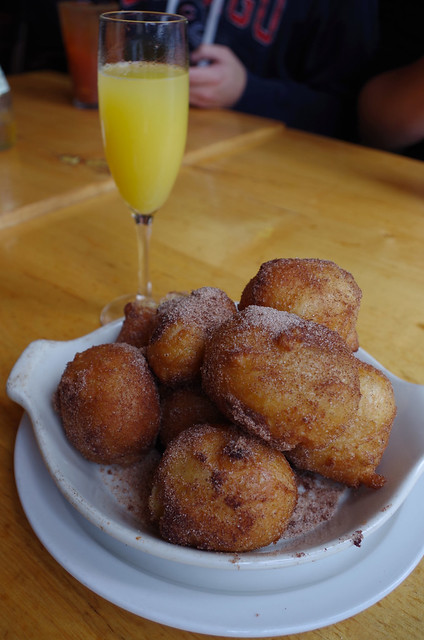 As we were all wavering over entrees on the menu, one appetizer caught my attention: hot and fresh cinnamon sugar doughnuts—YAS PLEASE! It’s spoken Bitch rule, that if doughnuts are on the menu, you have to order them.

It didn’t take much coercing to get Ali and Adam on board with some doughnuts to start, and I know they certainly didn’t mind them once they arrived. 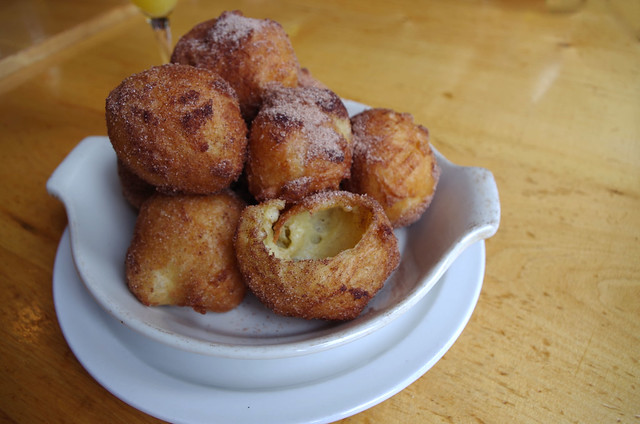 The doughnuts were slightly larger than doughnut holes, and were thin, crispy puffs of dough that melted in your mouth when they touched your tongue. The sugar and cinnamon crust on the outside was the perfect amount of sweetness, and with several doughnuts in the order, there were plenty for the three of us. Honestly, these were some of the best doughnuts I’ve had at brunch. 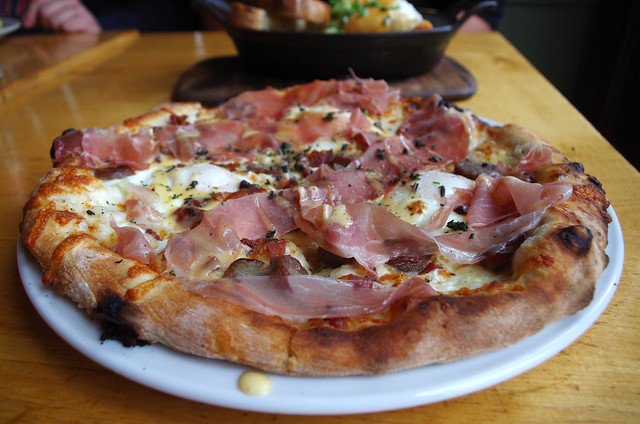 To start off the entrees, and being that we were at a pizzeria, it made sense for one of us to get the breakfast pizza. Thankfully, Ali decided early that was what she wanted and when it arrived at the table, I was jealous. The pizza is made with housemade dough, three over easy eggs, sausage, cheese, and you are offered the choice of adding prosciutto and Hollandaise for $3—Ali opted for those additions and was thoroughly content with her decision. 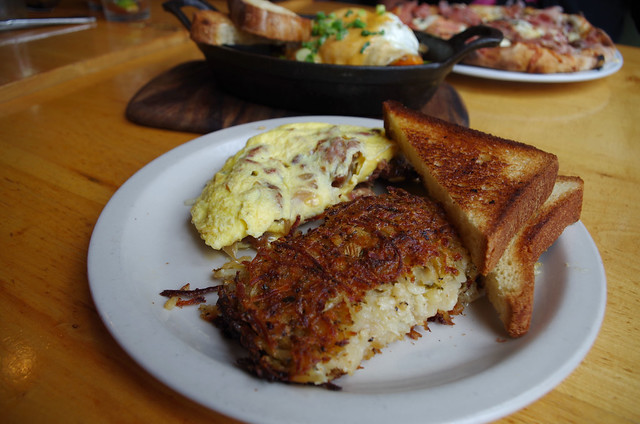 Adam was quick to a decision on his entree as well, and chose the Roscoe Street omelet with a side of potatoes. The potatoes were served as hash browns, and were a hearty side at that. The omelet was full of mozzarella, provolone, Italian sausage, bacon, and caramelized onions. 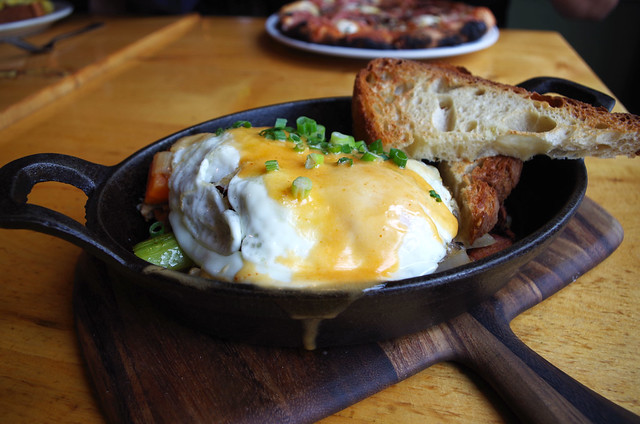 After the doughnuts, I was craving something savory and scoured the menu looking for something that piqued my interest, and taste buds. I asked our server for her recommendations, and she suggested the pork hash, so I went with her suggestion. The tomato braised pork hash came in a cast iron skillet and was two eggs over easy, cubes of braised pork, chunks of celery, carrot, and other veggies, with a side of toast. 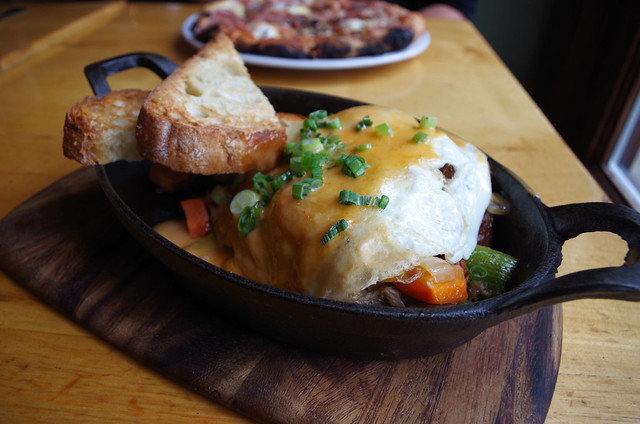 The hash was flavorful, and the braised pork was tender, paired nicely with the cuts of veggies under the eggs. The eggs were cooked perfectly over easy, and the fact that the dish was served in a cast iron skillet helped to trap some heat and prevented the dish from becoming cold. All in all, it was a great dish! 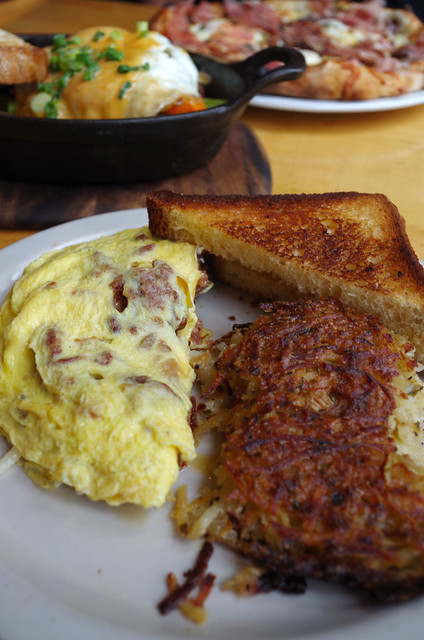 Frasca Pizzeria and Wine Bar was a delicious, simple, and easy brunch for the three of us. The service was great, however it was slow at times, but that would be my one chief complaint.

The Bitches say: A. Frasca Pizzeria and Wine Bar is a great, casual brunch spot on the cusp of Lakeview and Roscoe Village.