I feel like many of my recent brunch ventures have included friends from out of town. Chicago is one of the best cities in the world during the summer, so it’s no surprise people come into town for the warm weather. As the temperatures start to cool, I’m sure this will not be the case.

My college friend Sarah was in town this past weekend and stayed with our mutual friend Britt. Being that it was the first weekend of October, the three of us decided that “fall” activities were a must! But first and foremost, we had to brunch.

On Saturday, we decided to head to Lincoln Square for Apple Fest, and of course, scoped out the restaurants around the festival to secure a pre-Apple Fest brunch spot. 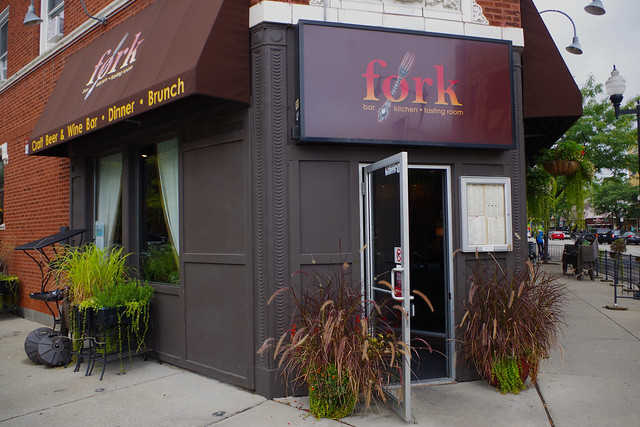 Britt had heard that Fork, a small, locally owned restaurant, was a hit for brunch and made reservations for the three of us. I was more than happy to go along for the ride—it’s nice not having to be the one to make the brunch plans all the time. 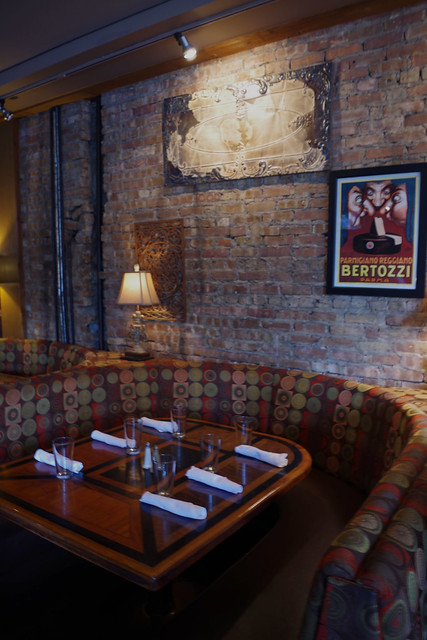 Fork is a rustic, farm-to-table restaurant in the heart of Lincoln Square. The interior is dark with exposed brick walls, dark wooden tables and chairs, and dark upholstery. One wall of the restaurant is entirely windows. This offers the interior a significant amount of light, which helped with all the dark decor. Fork certainly needs all the light it can get.

As the three of us were enjoying the weekend together, we wanted some libations to celebrate. Each of us ordered Bloody Marys and cheers-ed to the weekend. 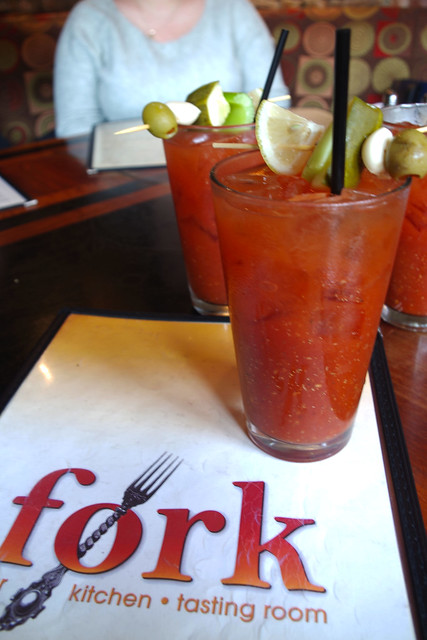 The Bloody mix was spicy, and had minimal baubles on a skewer, including a pickled garlic clove, a pickle, a lemon wedge, a small piece of celery, and an olive. The mix was almost too spicy for me, but it was potent and certainly made me feel like it was the beginning of fall.

I also ordered a hot coffee, with my usual cream and sugar. I was disappointed with this cup of java as it was bitter. Perhaps it had been sitting on the burner for too long—no amount of sugar or cream can cover a poorly kept pot of coffee.

The three of us chatted about our lives, and the Bacon and Beer Classic that Britt and Sarah were attending later that day. We got so caught up in our conversation, that our waiter had to wait a second for us to make decisions on our entrees. Being fickle that day, I happened to be the one who wavered the longest, so I let Britt and Sarah order first. 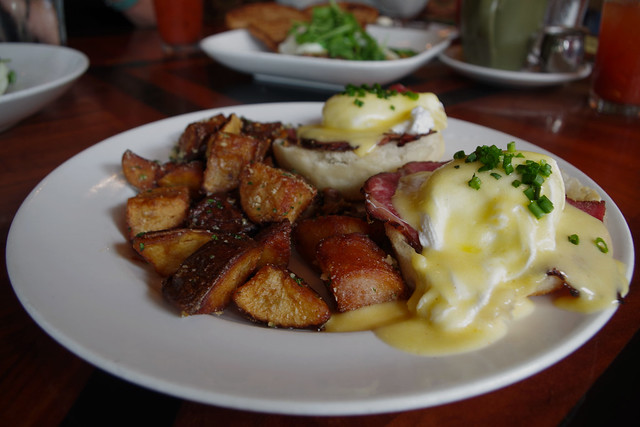 Britt chose the ham eggs Benedict with house-cured ham, Hollandaise, and chives atop an English muffin. Britt loves a good eggs Benedict, but I don’t think this one hit the spot for her. It was not a well-proportioned dish, with far too much muffin compared to ham and poached eggs. Also, the restaurant went heavy on the Hollandaise, and while it was delicious, it was simply too much. 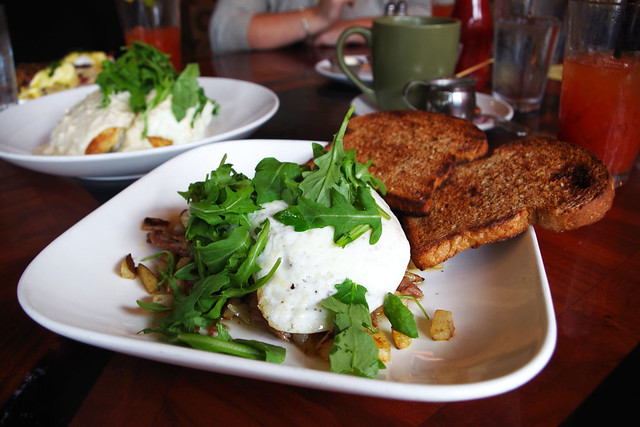 Sarah opted for the duck confit hash with duck, potatoes, garlic, and arugula on top. Sarah loved her entree, stating that the duck was flavorful and tender and that it wasn’t over seasoned, as hashes can be. The addition of the arugula added a fresh layer that made the overall dish feel lighter. Duck is high in fat, so a duck-centric dish can fill you up fast, but this dish didn’t feel that way.

Lately, I have started asking waiters what they recommend, as they know the menu so well. Our waiter suggested the hangover helper, so I went with it! The hangover helper is a combination of two over easy eggs, house bacon, and cheddar cheese atop a housemade herb biscuit, and covered in chicken sausage gravy. 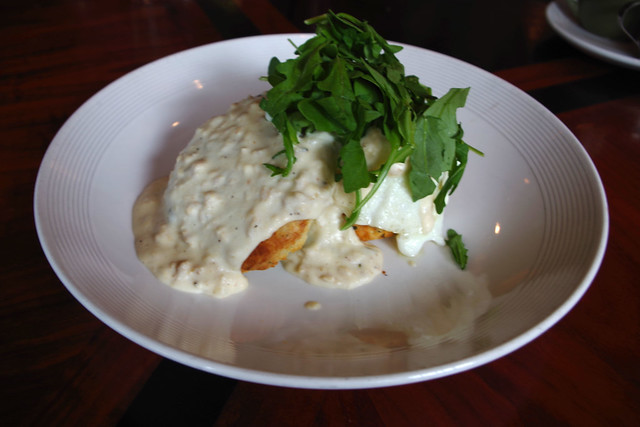 The dish came out as a heaping plate of gravy over biscuits, covering what lay beneath. When I received the dish, I didn’t really know where to start, so I just started digging in. The eggs were well-cooked, and the biscuit was incredible—light and fluffy, yet didn’t crumble at all! The bacon was where I really ran into trouble. At one point, I took a bite and bit down on something so hard, I thought I may have broken a tooth. It happened to be the bacon, which was charred and resembled something more like jerky than bacon. I proceed to pull all the bacon out of the dish—after that unappealing mishap, my stomach turned on this dish.

As Sarah, Britt and I were leaving, I was really disappointed I didn’t enjoy the brunch. And what’s worse, is I saw a framed Thrillist article with a stunning photo of Fork’s chicken and waffles—why, oh why, didn’t I see this as we walked in?! If there is a next time, that will be what I get! Fork was a charming spot, but this particular brunch was not a hit.

The Bitches say: C-. After my mishap with the bacon and coffee. and an ill-proportioned eggs Benny, this could not be a brunch worth recommending.