Nowadays, I mix work and pleasure out of necessity—rather than choice. And by that I mean I usually bring my friends on Bitch-coordinated brunches, travels, and other activities. I also take to smashing different friends together out of calendar limitations—i.e. there’s not enough time in the day.

Thankfully, my core group is filled with a bunch of sassy, funny, all-around-badass girl bosses who can usually find something in common. Two of my wild child gal pals, Alana and Cara are both New Englanders with strong personalities, hilarious senses of humor, and unique outlooks on life. So, I suppose I should have expected that our first brunch together would turn into four hours of drinking tequila cocktails until the late afternoon.

The location? Espita Mezcaleria, a new Mexican restaurant and Mezcal bar that’s conveniently located in my stomping grounds of Shaw, everyone’s favorite place to open a great restaurant. Better yet, Espita is owned by a delightful couple—and I’m of the belief we need more independently owned spots and less big restaurant groups. (We were invited to try Espita’s brunch, so this one was on the house.)

We nestled into a corner booth in the restaurant, which has high ceilings and industrial vibes mixed with bright, Day of the Dead inspired-graffiti, and paintings on its walls.

We began with cocktails and guacamole, as you do at brunch at a Mexican restaurant. The guacamole is served in the classic fashion with avocado, diced onions, chopped jalapeño, and cilantro in a bowl. Espita also offers a selection of sauces: pistachio, roja, chipotle tomatillo and others to enjoy with the crispy, thick, and salty corn tortilla chips. These were top notch chips. 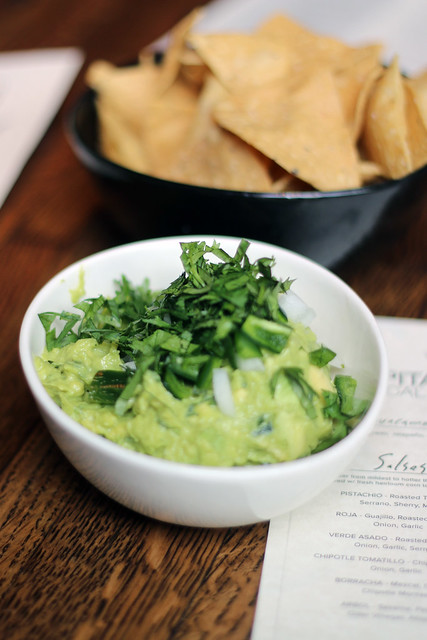 The brunch bebidas were unique and festive. The Que Onda is a cocktail made with Mezcal, aged rum, cold brew and lemon, while the Jamaica Aqua Fresca is a cocktail with Hibiscus, lime, raw agave, and gin or vodka. While the Rosé Mimosa caught my eye, I decided upon the Misa de Gallo, a cocktail with tequila, rosé, honey, and grapefruit. Cara chose the same. Alana chose the Guadalupe, a house Mezcal Bloody Maria. 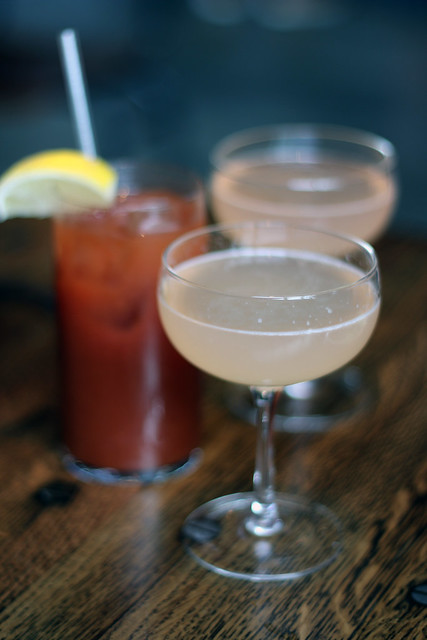 At brunch, the brunch menu comprises omelettes, savory, sweet, and tortas de huevo. We chose to begin with the fruit salad from the sweet menu. The bowl of mixed fruit included cantaloupe, strawberries, purple grapes, and black berries, all tossed in a red Guajillo oil and topped with mint. 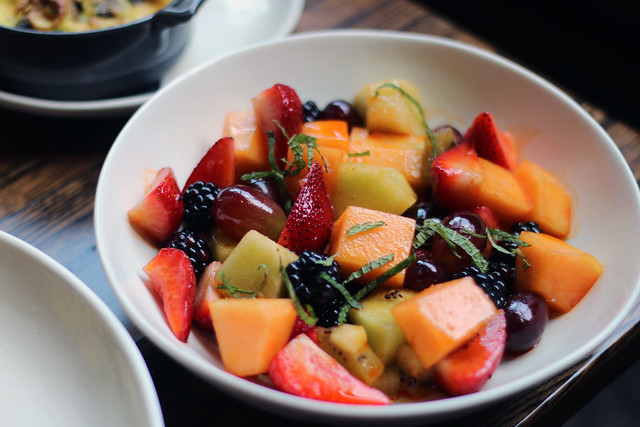 The savory selections all looked delicious, but we chose the chilaquiles and the chilango. The chilaquiles could be ordered with chicken, diced skirt steak, or green chorizo, which was our choice at brunch. The big bowl of red tortilla squares tossed in salsa roja was covered with ground green chorizo, eggs over easy, and plenty of Queso Fresco. It was definitely the best iteration I’ve sampled of this classic Mexican brunch order. 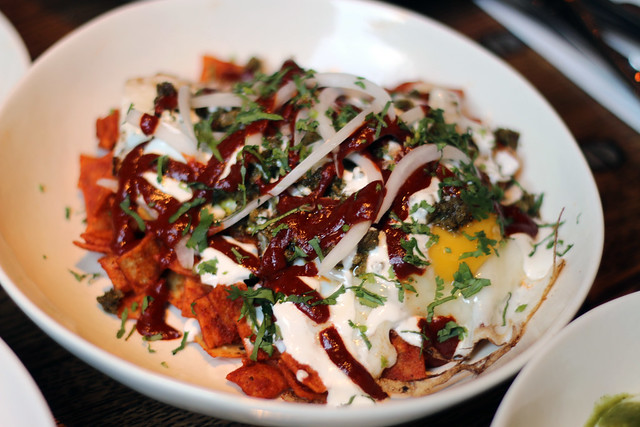 The chilago was another bowl of eggs and Mexican goodness. The base of the dish were moist ribbons of hash browns, not unlike the style you’d find in a diner. The hash was covered in green chorizo, salsa verde, and slow poached eggs, which promptly broke and covered the dish. In my opinion, this was the best dish on the table. It was spectacular. Mexican food is not my favorite style of brunch—as I typically prefer Italian or French, but this dish has me singing a different tune. 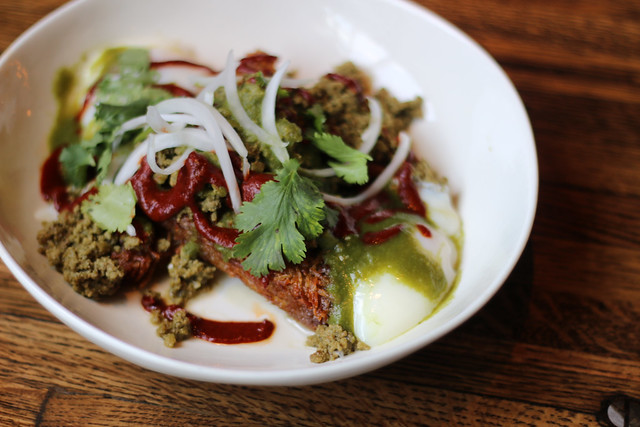 We also ordered the black kale and cremini mushroom torta de huevo, which is essentially a Mexican frittata, baked eggs in a little cast iron pot. The eggs were perfectly fluffy, with chunks of mushrooms and kale. The eggs themselves lacked flavor, but the torta was served with a creamy red sauce that was flavorful and rather spicy. So spicy that I yelped after I took a bite, but promptly went back for more. 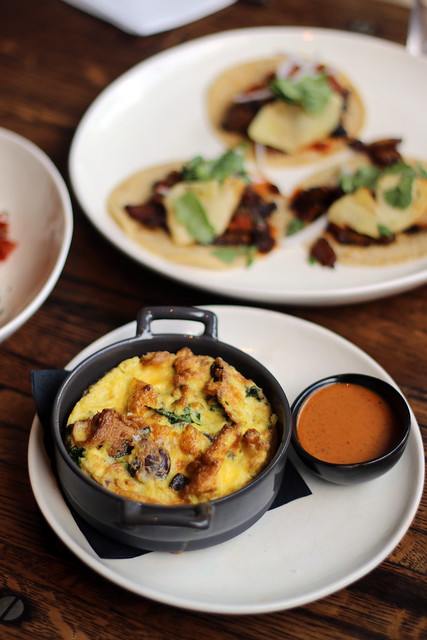 You can select from six types of tacos available in quantities of two or three, served on heirloom corn tortillas. You can have your tacos with mushroom, grilled tilapia, chicken, al pastor, or skirt steak. We went for al pastor, which are served slices of seared pineapple and salsa ranchera. The tacos were presented simply, crafted with fresh, good ingredients, and delicious. While I would return for dinner next time I’m craving tacos, they were actually less thrilling than the other dishes on the table.

We also ordered a side of applewood smoked bacon, which seemed slightly out of place for a Mexican spot, but perfectly appropriate at brunch. It was a substantial portion of greasy, warm beautiful bacon strips. I prefer my bacon a bit more crispy and a bit less fatty, but that did not stop me from having a second piece. 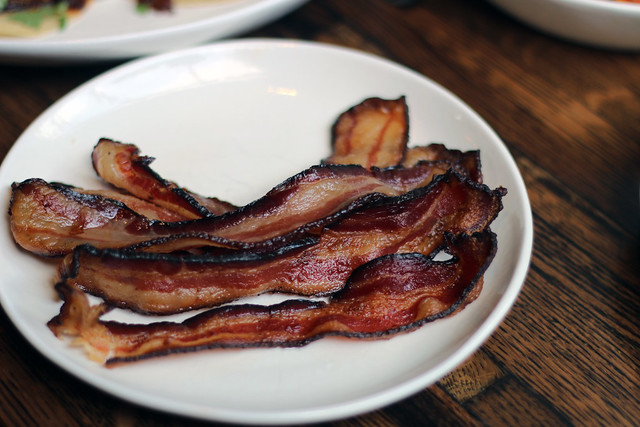 The tres leches cake was moist and topped with a light vanilla frosting that was more milky than sweet. I appreciated that the frosting was an understated amount of sugar as the tres leches cake itself was very sweet. It was served with diced, marinated pineapple and a salted caramel gelato. 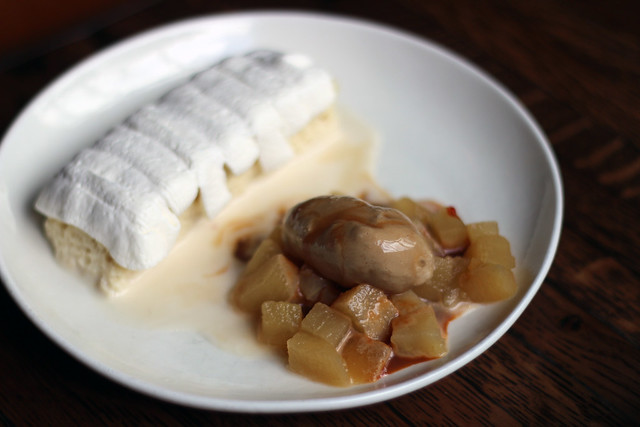 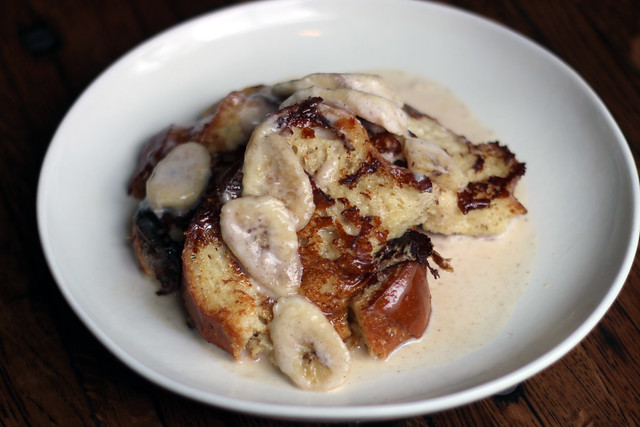 The enormous dish was absolutely sweet, moist, sugar-laden heaven in comfort food. Each bite was absolutely decadent—and I literally could not stop myself from eating it. I will go back for this French toast—and for the cocktails—time and time again.

The Bitches say: A, for an awesome Mexican brunch with spectacular cocktails and chill vibes among the bright, Latin art and high ceilings. Bonus points that it’s in our favorite neighborhood. Order the French toast—it will bring you pure bliss.