During Saturday’s highly unwelcome late-April snowstorm, my husband Chase and I ventured up to Boka Restaurant Group’s Wrigleyville hotspot, Dutch and Doc’s. The restaurant invited us in to treat us to brunch. The eatery is brightly perched on the corner of one of the most famous intersections in all of Chicago: Clark and Addison. Across from the Wrigley Field marquee, the restaurant’s neon signage holds its own and draws patrons across the street, even in a blizzard. 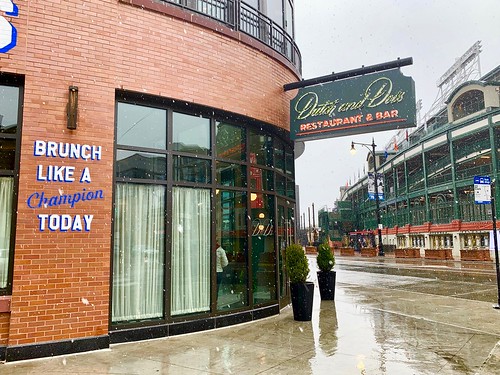 This diner-meets-sports bar is one of seven restaurants in the Hotel Zachary (neighboring restaurant Mordecai topped our list of “The Best Things We Tried at Brunch” this spring). Of all the hotel’s restaurants, Dutch and Doc’s has the most prominent façade and desirable location. 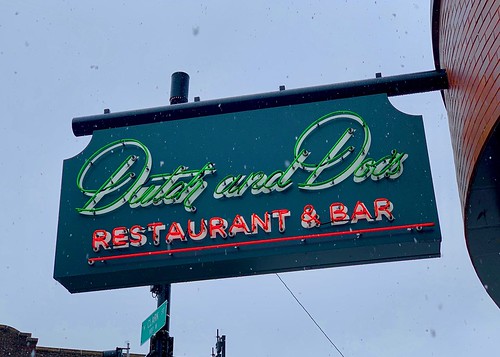 The interior is large and spacious with high ceilings, two floors, big leather booths, and a curved wraparound bar. There was no baseball game on this particular Saturday, but the restaurant was packed following a neighborhood 5k race. The bustling energy of the crowd was elevated a couple decibels by half a dozen TVs airing ESPN. We were brought to a small high-top table – the only open table on the first floor. Game day or not, the attire is casual with customers sporting everything from race attire to baseball jerseys. 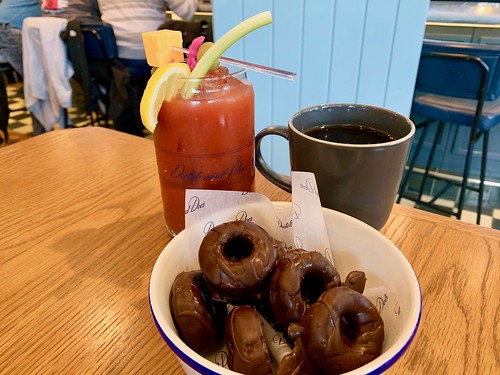 We started with a cup of black coffee, which was hot and robust, and a Bloody Mary that was the perfect blend of tomato and spice. We couldn’t resist an order of the mini frosted doughnuts. We were surprised when we got an entire bowl of them! For editorial purposes, I decided I would just have one of the little vanilla cakes with chocolate frosting, but three doughnuts later, it was clear that “editorial purposes” had fallen by the wayside. The doughnuts were room temperature and the chocolate frosting was more of a hard coating. They reminded me a lot of Entenmann’s chocolate doughnuts. 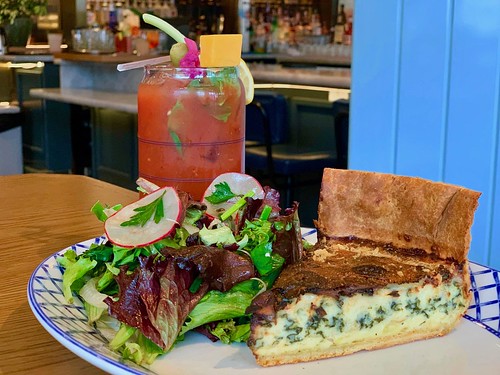 I ordered the quiche with braised kale, mushrooms, and cheddar. The top and bottom were a little well-done, but the inside was cooked just right. It had an unusually tall crust and was served with a lightly dressed side salad topped with radishes. The tastes of the quiche blended together well. None of the ingredients or tastes was especially prominent, but the dish was satisfying and filling. 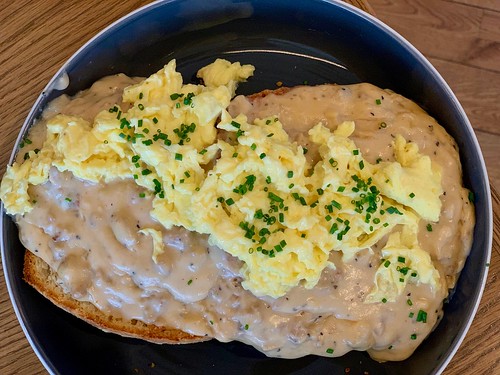 From a flavor perspective, the star of the brunch was the biscuits and gravy. Chase modified the order by asking for scrambled eggs instead of the traditional sunny side up. It was certainly an American – even midwest-sized portion, but there are no words for how delicious these biscuits were, topped with mouth-watering maple sage sausage gravy. As a Southerner, Chase is a biscuits and gravy connoisseur and says this particular presentation was “definitely top third” of those he’s tried. (Let me tell you, it is quite a compliment to be ranked among mom’s recipe, dad’s recipe, and even Granny Pat’s recipe). On my next brunch visit, this will definitely be my order.

While this was my first visit for brunch, I have been to Dutch and Doc’s several times for drinks and postgame snacks. I would be doing you a disservice if I didn’t mention that their macaroni and cheese is to die for, with a four-cheese blend, garlic breadcrumbs, and cavatappi pasta. It’s not on the brunch menu, but I highly recommend it if you’re in the mood for a super decadent and delicious dinner. 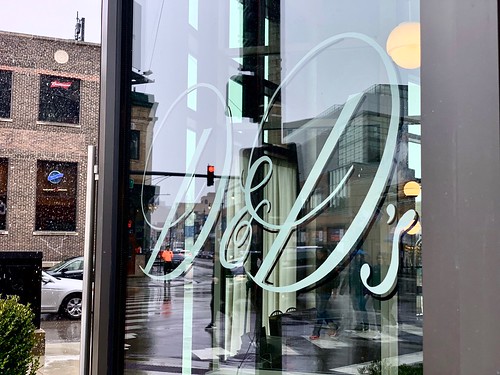 The Bitches say: four Champagne flutes! This Wrigleyville diner has some great dishes if you know what to order and is a yummy and convenient destination before or after a Cubs game.

Dutch and Doc’s serves brunch Saturdays and Sundays from 10 a.m. to 2 p.m.