One Sunday, Chris and I had an errand to run on the south side. Our storage unit is located about 20 minutes south of where we live, and we were off to unload a few of the many boxes we have been storing—most of which are furniture and possessions from his mother and grandparents. After both of Chris’ grandparents passed away on the small island of Curacao in the Caribbean, his mother had movers box everything up from their huge plantation home and had been paying for storage ever since.

A few years ago, we had Chris’ mother ship us all the antiques, furniture, collectables, and more so we could store it for her for free. The two of us love spending hours in the storage unit, unwrapping all of the cool and unique items from his grandparents’ culturally enriched life of traveling the world and collecting items along the way. I guess you would call it Chris and his brothers’ inheritance. Some of it is junk, but the majority of it is extremely cool stuff, a lot of which has found a home in our condo. 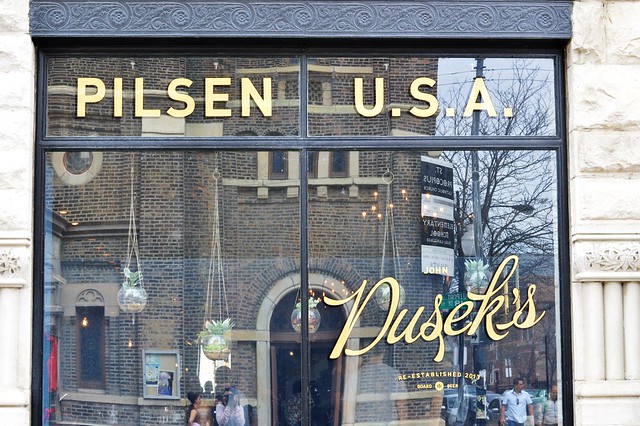 Wanting to brunch before embarking on a few hours of heavy moving and sorting, we decided to check out the very cool and eclectic neighborhood of Pilsen. I had never really been to Pilsen during the day, only at night, and I have thoroughly enjoyed the funky and fun vibe the neighborhood offers. During the day, graffiti walls are scattered among buildings, and a good number of upscale restaurants are next to fast food joint-type places to provide food offerings of all cuisines. 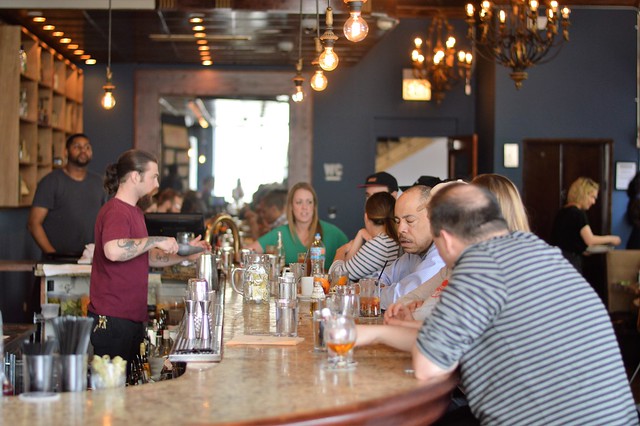 Chris and I decided to check out Dusek’s, a staple in the Pilsen neighborhood and a spot that had good Yelp reviews. We casually strolled into Dusek’s without a reservation to a crowded dining room. Thankfully the wait wasn’t long and we were soon seated at a lovely two top by the windows in the second dining room.

Dusek’s is a lovely, casual, and vibrant “beer and board” spot that boasts a diverse menu with a lot of offerings, and a beer list to rival any brewpub. Dusek’s was awarded a Michelin star in 2015 and we were excited to try the brunch at this highly regarded spot. 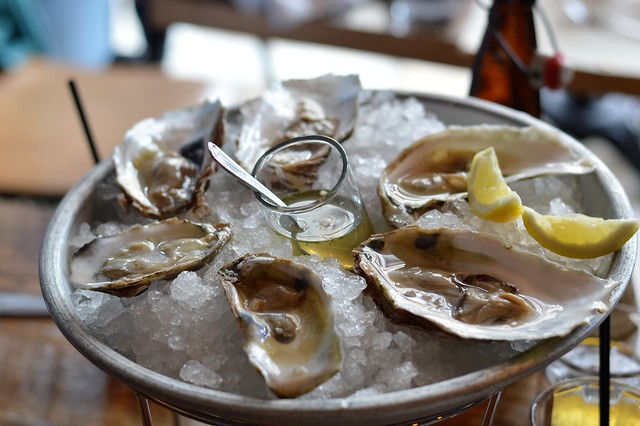 We began to explore the menu, all while looking at the entrees that were arriving to other tables in an effort to see what looked good. Well, everything looked delicious. After waiting for about 10 minutes, we were finally greeted by our server and he took our drink orders. We both ordered coffee, and decided to start with oysters, and the ricotta and pineapple beignets. 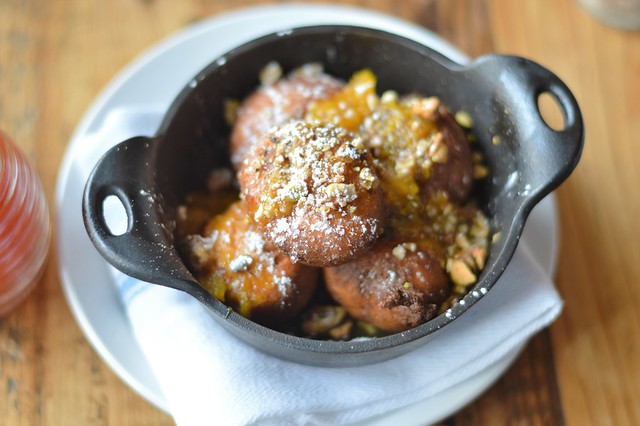 Our oysters and beignets arrived before our coffee, which was quite disappointing. The oysters were great. The beignets we did enjoy, but we could have done with less of the glaze. While the glaze was really good, there was a little too much and overpowered the dish, making it sweeter than it needed to be, in our opinion. 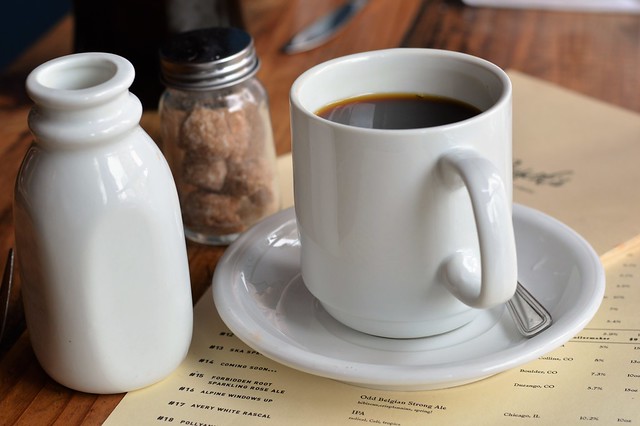 Finally our coffees arrived to the table and we were ready to order entrees. Chris opted to go with the board and beer breakfast, although I must say we were extremely tempted by the current special; a breakfast steak with the works. Our mouths watered as our server described it, but ultimately we decided we might be too full to indulge in the steak. Chris’ board was served with a Miller High Life pony. 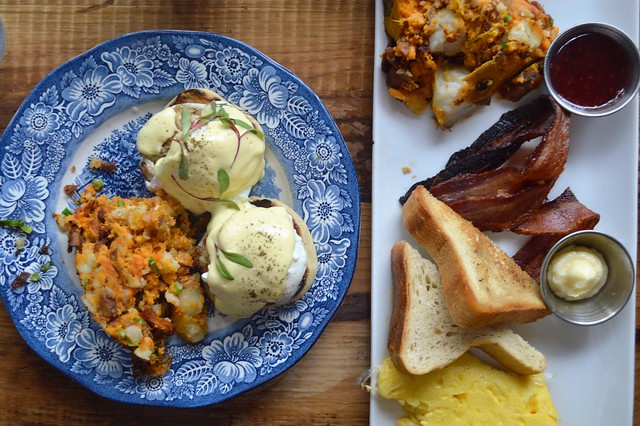 A somewhat simple man when it comes to food, Chris enjoyed the simplicity of the dish; two eggs, a choice of bacon or sausage, house potatoes, and toast with jam. The house potatoes were the only downside of the dish; they weren’t crispy, which we prefer, but more importantly they lacked flavor.

After admiring the crab cake Benedict the woman at the neighboring table had ordered, I decided to go for it. As a native Washingtonian, crabs are in my blood, having grown up near the best crabs around: Maryland blue crabs. I am extremely critical of dishes that are outside of the DelMarVa area, so it is always a risk when I order something with crab in the Midwest or elsewhere. I love crab so much though, sometimes I cannot resist. 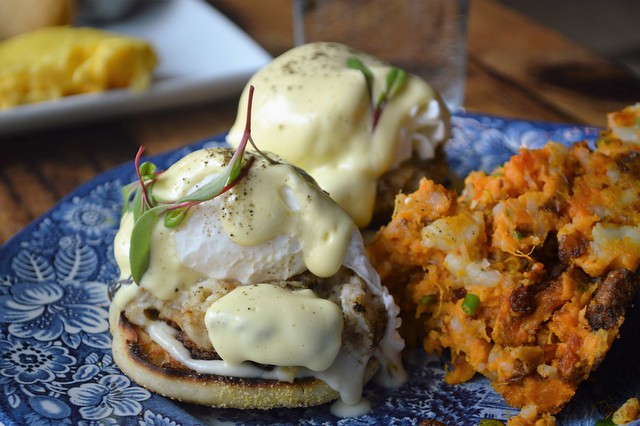 I was extremely happy with my choice, and I must give credit where credit is due. For a Midwest restaurant, these crabs cakes were up to my East Coast seafood-lover standards. The eggs Benedict was delicious and I enjoyed the Hollandaise that complemented the crab perfectly. Unfortunately my dish came with potatoes as well, so that was kind of a damper on the meal, as I didn’t find them enjoyable.

By the time we had finished our meal and our plates had been cleared, Chris’ Miller High Life pony finally arrived to the table. As something that is supposed to complement the dish and be served alongside, it was disappointing that it took so long to arrive to the table, in similar fashion to almost everything else during the meal. 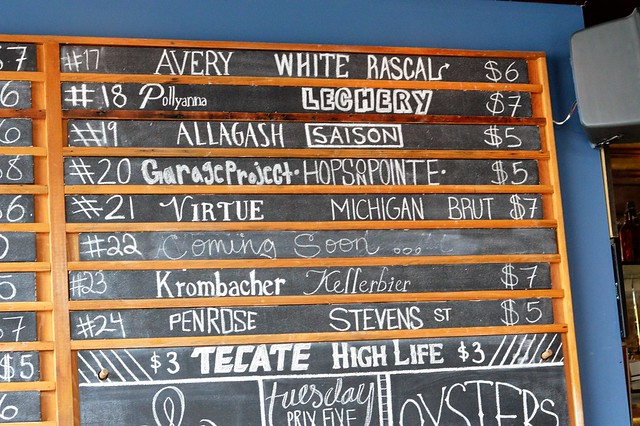 Our server was inattentive, and although very nice, wasn’t up to the standards of what I would expect from a Michelin-starred restaurant. The vibe is vibrant and exciting, and at night I can imagine it is even more of a fun spot, thanks to the adjoining Thalia Music Hall.

I would come back again, but the next time I am in Pilsen for brunch I will definitely be looking elsewhere to grab a bite. While I had a pleasant meal and enjoyed the atmosphere, I don’t exactly see what all the hype is about, but that may be a result of me not enjoying the full experience of the restaurants beer offerings. For my breakfast food standards, it was good. Next time, I will pull up a chair at the bar and indulge in the variety of brews they offer.

The Bitches Say: B. Dusek’s is a good choice for brunch with family if in the Pilsen neighborhood thanks to its relaxed vibe and ambiance. As far as a Michelin-starred restaurant goes though, we’d have to say it fell short this time and the service totally missed the mark. We would definitely come back again though!

Dusek’s serves weekend brunch on Saturdays and Sunday’s from 9 a.m. until 3 p.m.