I consider myself really lucky to live in my neighborhood. I’ve lived on this street since moving to Chicago in February 2015 and honestly, I have no intention of leaving it anytime soon.

One of my friends, Ashley, happens to live at the end of my block and she also happens to love brunch nearly as much as I do. Being just a stone’s throw away, I can always call on her on weekends to partake in a fun brunch.

On one fall Sunday, both Ashley and I had busy work weeks ahead of us but we wanted to catch up before it got underway. Needless to say, it was easy to talk her into a quick brunch when the restaurant I chose was literally across from her apartment. 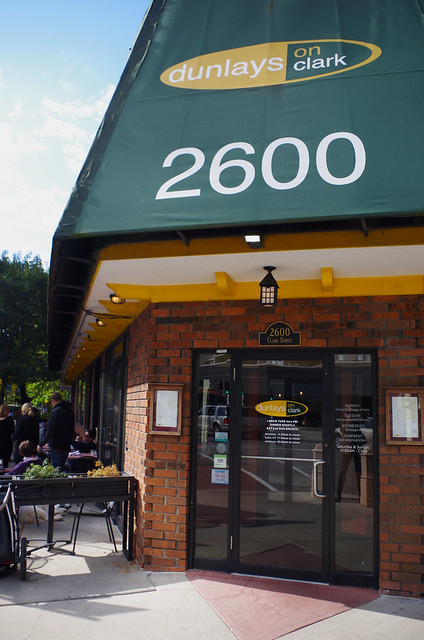 Dunlays on Clark is a very family friendly, and casual restaurant known for dishes that make you feel like your mom is cooking for you. I have been to Dunlays many times, whether for happy hour or for dinner, so I was excited to try the brunch dishes. 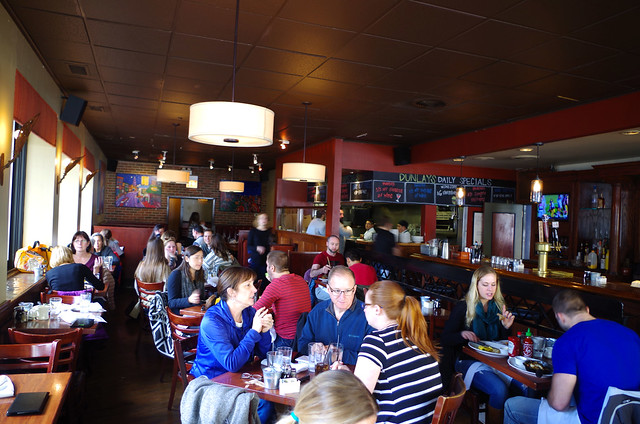 Ashley and I met at Dunlays around 11 a.m. on a Sunday with the intention of a quick, delicious brunch. I was happy to have walked in and be seated at a table for two by a large window. The restaurant is a very simple spot, with wooden tables and chairs, some leather booths, and chalkboard walls above the bar, proclaiming the specials of the day.

Our waitress greeted us and let us look over the menus a bit before coming back for our orders. Being that this had to be a quick brunch for both of us, Ashley and I were sure to be armed with our drink and entree orders by the time our waitress returned. 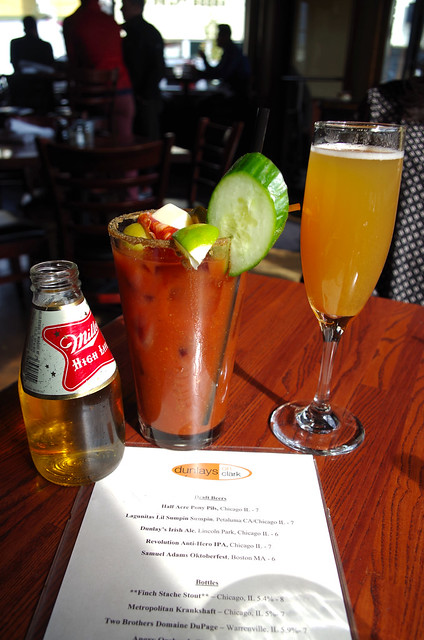 Once both of our orders were taken, I don’t think we waited longer than five minutes before our drinks arrived—this made me quite happy. For a brunch libation, I chose the apple cider mimosa which was champagne and apple cider. It was quite a twist from the usual mimosa that one is used to having, and it felt more like a carbonated apple cider. I enjoyed the drink, and liked how it took me a step away from the usual orange juice and bubbles.

Ashley decided to try the Bloody Mary, which was spicy and had a nice tomato texture and base. The beverage was also accompanied by a pony beer and Ashley enjoyed it stating that “all Bloody Marys should have a beer back”—not being a beer fan, I simply agreed with this sentiment.

Ashley and I chatted for a bit, but within fifteen minutes of ordering our entrees, they arrived piping hot and ready to be consumed. 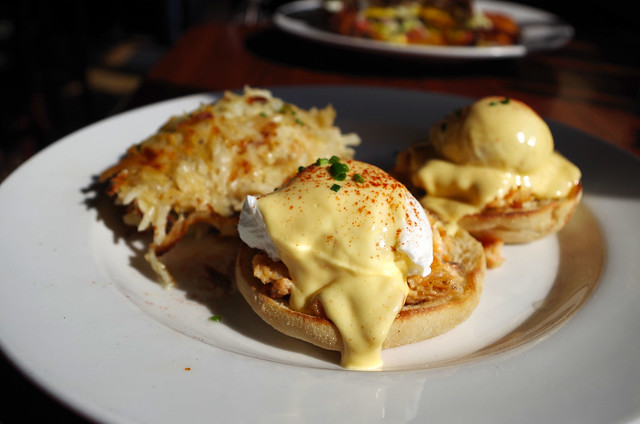 For an entree, Ashley decided to go for the seasonal Benedict, which happened to be a salmon Benedict this time around. The dish also came with a side of hash browns, but she was really craving some vegetables. To go with the seasonal theme, Ashley ordered a side of seasonal vegetables to go with her Benedict.

The Benedict came with poached eggs, creamy Hollandaise atop toasted English muffins. Ashley was disappointed that the salmon was not a solid patty or a slice of salmon, as it would have been easier to eat. When it came to flavor, the salmon was seasoned with lemon, and pepper and went nicely with the cream based Hollandaise sauce. 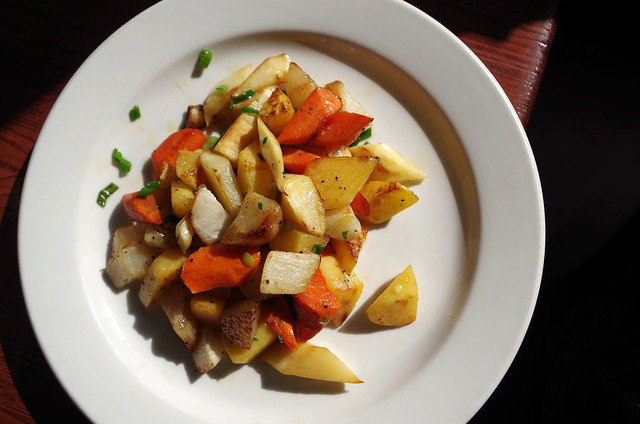 The seasonal vegetables were large cuts of carrot, potato, and onion sauteed in olive oil and topped with chives. It was a basic plate to say the least, but the vegetables were fresh and well-cooked, so Ashley had no complaints. 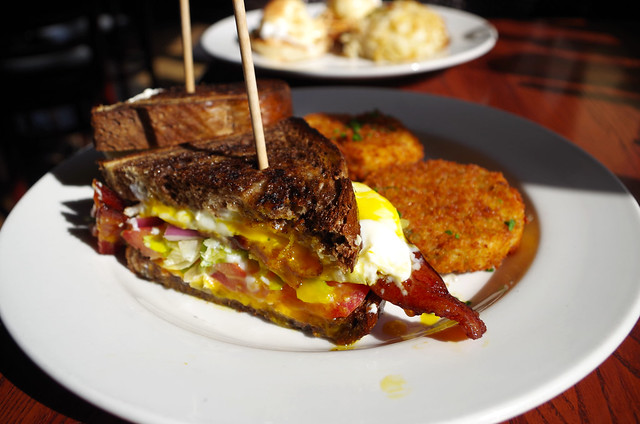 I decided to go for a sandwich, as we were nearing lunch time, my palate was craving something savory. I ended up choosing the fried egg sandwich with two eggs over easy, cheddar cheese, bacon, lettuce, tomato, onion, and mayonnaise on rye bread. There was also a side of potato pancakes, which I loved and wished there had been more of.

The crispy fresh lettuce and tomato made this sandwich light and airy. The bread was perfectly toasted and never became soggy even with the eggs yolks running through each layer. The bacon was salty and added another breakfast element to the sandwich to ensure it felt more like brunch, than lunch. I loved this sandwich, and frankly it makes me want egg sandwiches more often.

Dunlays on Clark proved to be a fast, delicious brunch that was convenient and easy. While we all love our fancy brunches, sometimes it’s nice to try a brunch that tastes like home and doesn’t require reservations. While the salmon Benedict was a bit of a miss, the fried egg sandwich was a hit!

The Bitches say: B. For a fast, easy, and delicious brunch, head to Dunlays on Clark. With so many sister restaurants that have made the Bitch cut before, Dunlays is certainly up there in our opinion. Steer clear of the salmon Benedict, but don’t pass by the fried egg sandwich—yum!

Dunlays on Clark serves brunch on Saturday and Sunday from 10 a.m. to 3 p.m.