After a Saturday night out that turned a bit hazy, we needed a quiet place to lick our wounds and possibly indulge in a little hair of the dog. DNV, the Donovan House hotel’s rooftop, invited us in for brunch and the timing could not have been better. It was a warm but not unbearably hot Sunday, perfect for rooftop dining. 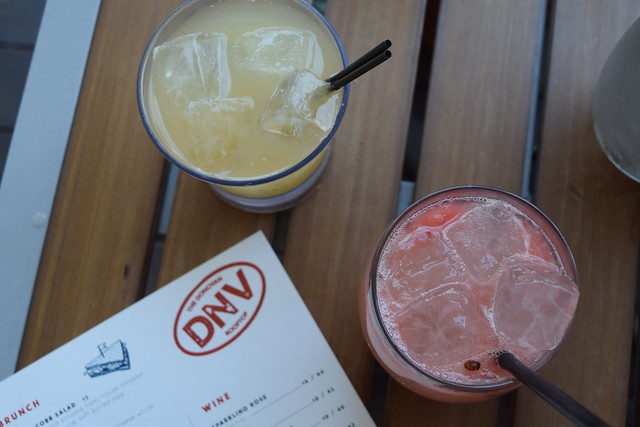 We were seated near the bar to the left of the pool deck and immediately greeted with sweeping views of Logan Circle and “selfie sticks,” DNV’s take on boozy push up pops. Yes, please. The selfie sticks were not only an adorable pop culture reference, but delicious to boot. Made with real pineapple and strawberry, these pops were essentially adult versions of the nostalgic summer treat. 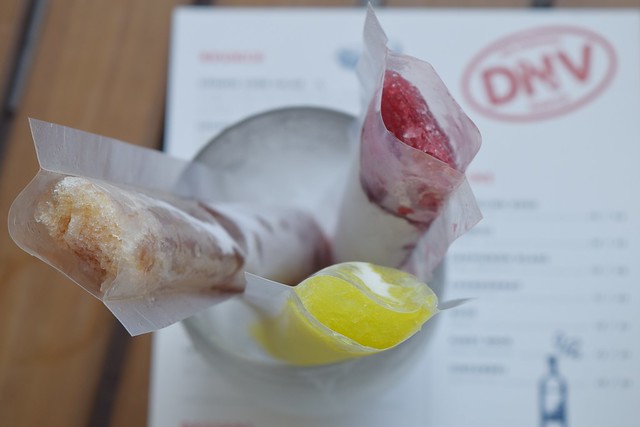 We perused the cocktail list, loving the cheeky nod to our social media crazed culture like “swipe right,” “tbt,” and “99 hashtags.” I settled on the Error 404, a gin, watermelon, lemongrass, and Yuzu cocktail. Kendra was in the mood for Avua Cachaça, so she tried the 99 Hashtags. Christina opted for an iced coffee. Our cocktails were light and refreshing—with just the right amount of chunky fruit.

It was nearing 1 p.m. and we had already packed in a workout and a trip to the farmers’ market, but only managed to consume iced coffee. We quickly decided on a few dishes, but have to admit we were surprised the menu didn’t offer small plates or appetizers to nosh on, given the pool scene. Our waitress suggested the house made potato chips to hold us over until our entrees arrived. They were greasy and crispy and paired well with our refreshing cocktails. 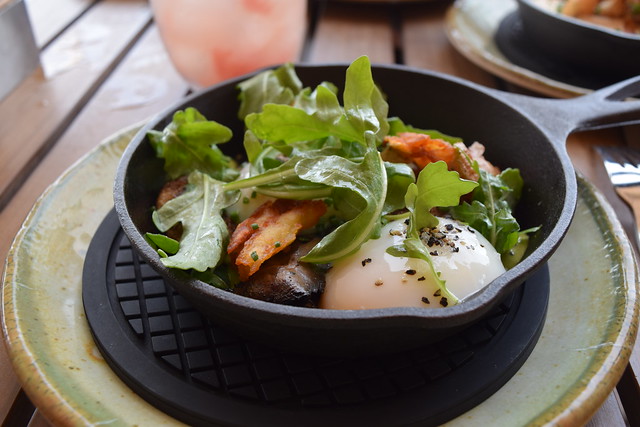 DNV’s menu is simple, but refined. You could go big with a fried chicken and waffles entree or you could keep it light with a farm breakfast. I immediately saw sunchokes on the menu and decided on the Chef’s Garden Breakfast with whiskey soy portobello mushrooms, crispy fingerling potato, sunchokes, pesto aioli, and soft eggs. Served in a piping hot skillet, the skillet’s combination of flavors kept each bite interesting. There wasn’t a single morsel left in that skillet when I was done with it. 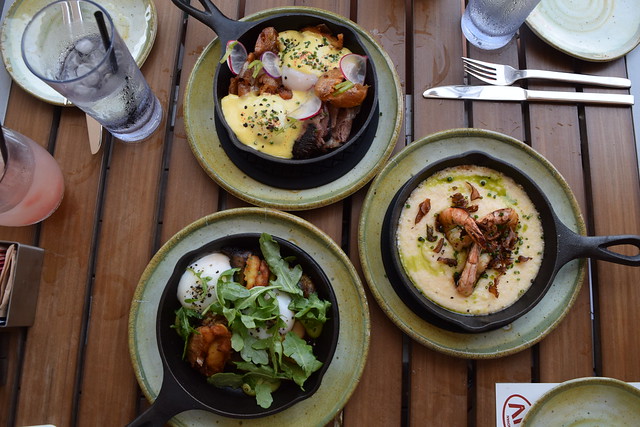 Kendra ordered the Chef’s Farm Breakfast, also served in a skillet. The combination of house‎-smoked ham, crispy fingerling potato, soft egg, and Tarragon Hollandaise was all the best breakfast treats you could want in one serving. The dish was hearty, but didn’t leave you stuffed. 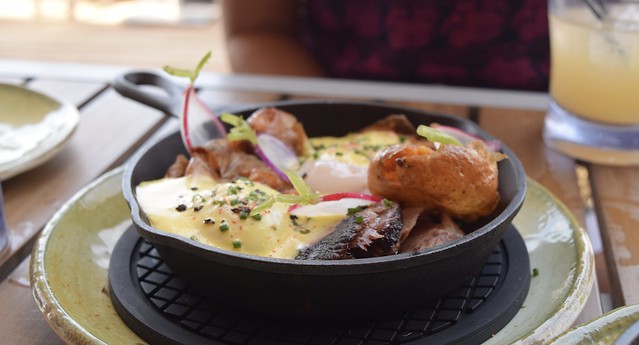 Wishing we were still on vacation in Charleston, Christina decided on the shrimp and grits. Arriving in — you guessed it — a skillet, this dish was a normal sized portion. The grits were creamy, but she wished the shrimp had a bit more flavor. Nonetheless, we left no shrimp behind. 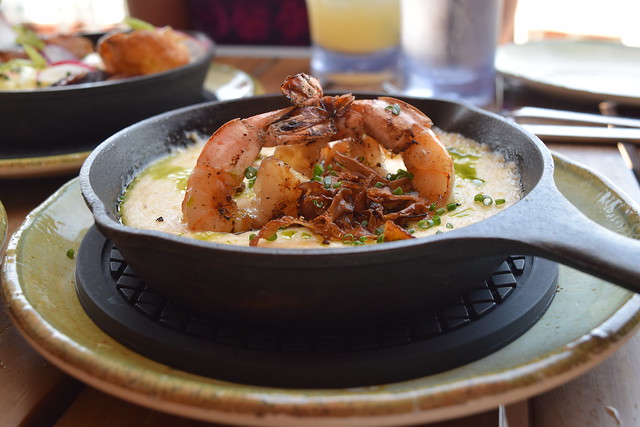 We decided to round out the weekend with dessert because life is short and doughnuts are good. 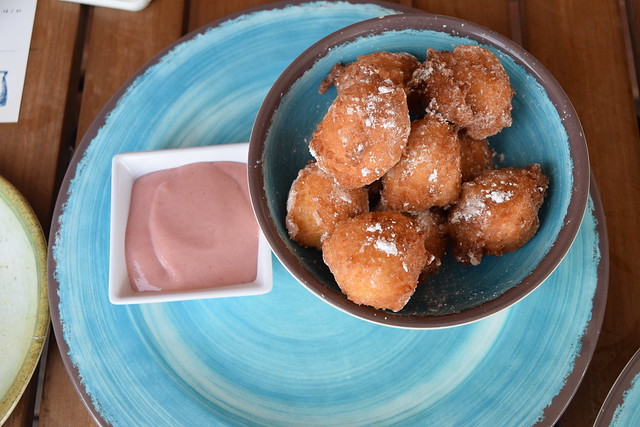 The team sent out a pre-dessert to our main dessert and we weren’t mad about it. The house-made shortbread was to die for, combined with summer’s freshest berries and home made whipped cream, we didn’t think it could get much better. Then the beignets came out with a strawberry glaze sauce. I’ve had a lot of beignets in my life, and I can honestly say these topped the list. It was like funnel cake dipped in strawberry shortcake icing. 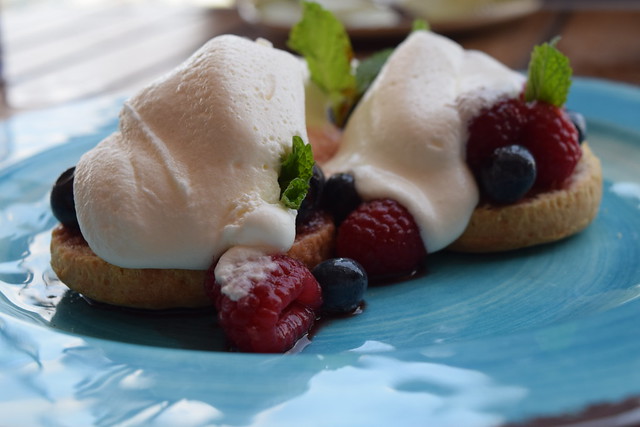 We grabbed our cocktails and headed a few steps to the pool to lounge and ward off any Sunday scaries.

The Bitches say: B+. A unique rooftop view combined with refreshing drinks and a relaxed pool party vibe, DNV is one of the District’s best kept secrets.