Celebratory brunches are the best kind of brunches, in my opinion! My friend, Ali, had just arrived back into town after successfully completing the Iowa bar exam. I hadn’t seen her in ages, as she has been holed up studying her life away. With her newfound freedom, it was time to celebrate with brunch. She came with me on Friday to the Tickled Pink Gala and then joined me for a Sunday brunch.

A restaurant I had been wanting to try for some time is Dixie, a modern, Southern-fare inspired restaurant, located in Bucktown, that opened last summer. Dixie is located in a very unassuming converted house right on Damen Avenue.

It is absolutely charming with its outdoor patio equipped with rocking chairs and twinkle lights along the alley entrance, and an perfectly designed interior, with brass hardware, luxurious décor, and charming wallpaper that exudes something you might see in an issue of Southern Living Magazine. It is cute to say the very least. 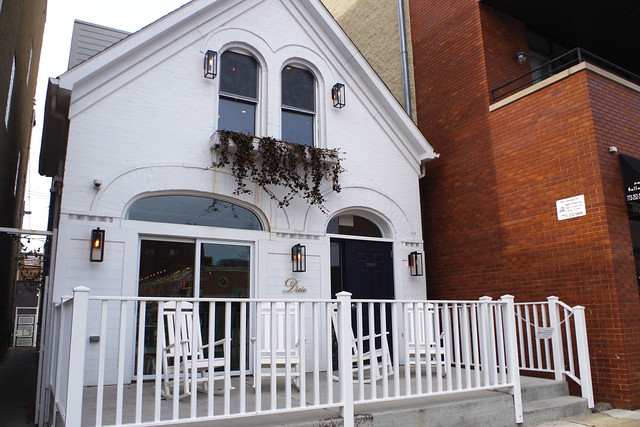 Ali and I arrived at Dixie at 10:30 a.m. and were both excited to head inside.

As we walked into the restaurant, the entryway was small and immediately parted to have you go right or left. Turning right took you into the restaurant, and turning left took you into 1952 ½ Liquorette. 1952 ½ Liquorette was cute with its plush velvet booths, dark mahogany bar, and mirrors that make the space look larger than it is. I’d love to go there for cocktails one evening. 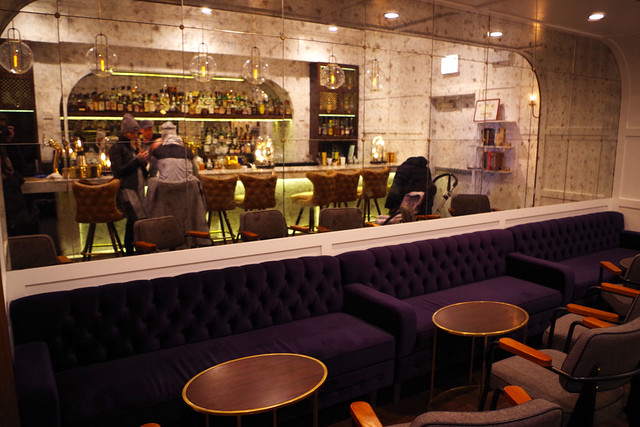 Ali and I turned to the hostess stand and were immediately asked “Do you have a reservation?” Um, no? I immediately was nervous that we wouldn’t be able to be seated but thankfully, we were led to stools at the bar. 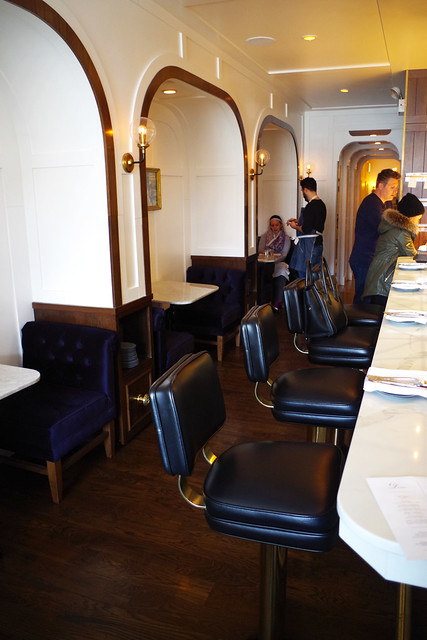 We were led to the tiny dining area on the first floor and seated at a marble bar with fixed stools. In front of us was a glass window for us to watch the cooks cooking in the kitchen. It was fun to watch the masters at work, creating beautiful dishes one after the other. My mouth was watering by the time we sat down.

Our waiter came by and welcomed us to Dixie and immediately asked if we wanted to put in drink orders. Both of us ordered coffee with cream, and, per our waiter’s suggestion, some cinnamon rolls to start us off. 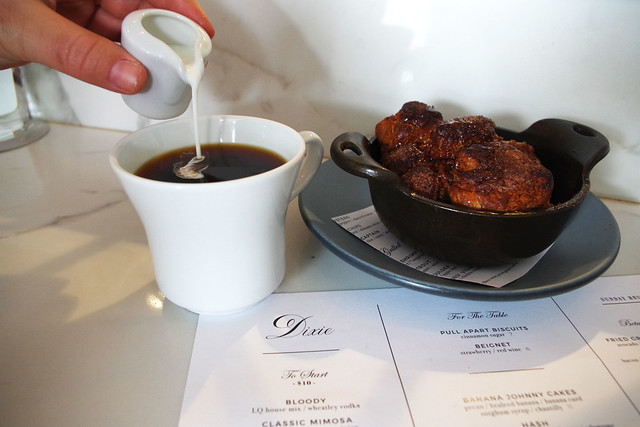 Fairly quickly, our order was presented to us. The coffee was bold and piping hot and came with the tiniest side of cream. Perhaps they should invest in larger cream containers as it seemed this one held a quarter of a teaspoon of cream—perhaps that’s a slight exaggeration, but it was tiny. 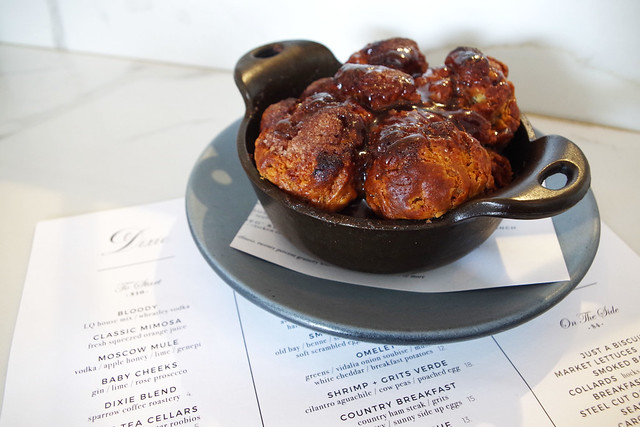 The cinnamon rolls were in a different form than I expected. They came out looking like monkey bread in a cast iron skillet. But, presentation aside, these cinnamon sugar-y buns were outstanding. The buns were crispy on the outside and doughy on the inside. The cinnamon and sugar had crystallized and hardened in the baking process and added a super sweet crunch—my sweet tooth was more than satisfied.

After enjoying our coffee and buns for a bit, our waiter came back and took our orders for entrees. Ali was quick to order, but being curious as to what our waiter suggested, I asked for his help in narrowing down my options. 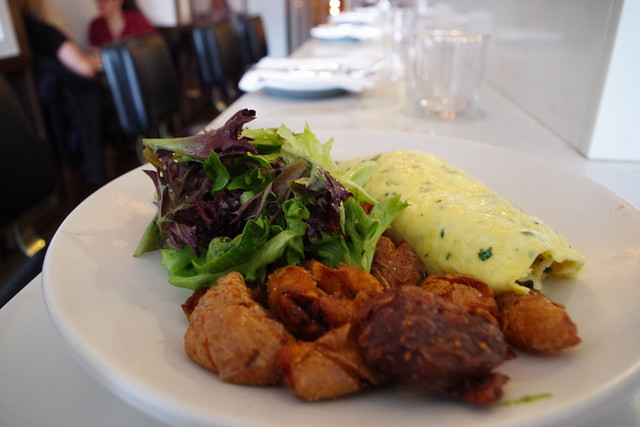 Ali ordered the omelet which came with fingerling potatoes, and a side salad. Ali immediately remarked on the potatoes, stating that they were perfect. Indeed, after sampling one for myself, I also agreed that the potatoes were outstanding. They looked to have been crushed or smashed, and then rolled in kosher salt to get them salty and crispy, then baked—absolutely delicious. The omelet was full of Kilt greens, vidalia onion soubise, and mushroom white cheddar. The omelet was perfectly balanced and truly picture perfect.

I decided to go with a savory entree as well, since we had just consumed those sweet cinnamon rolls. I opted for the market quiche with goat cheese, bacon, and roasted tomatoes. The quiche was an individual size and perfectly portioned. The dish also came with a side salad with blue cheese and a light, creamy dressing. I must say, this salad was delicious. 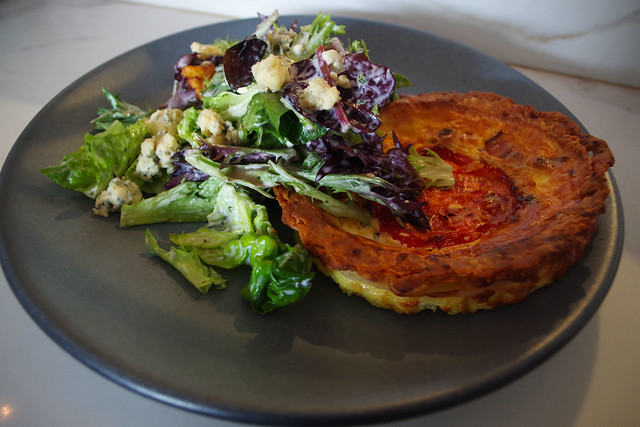 The salad was full of butter lettuce, which I believe to be one of the more underused lettuce varieties. The salad was delicious and frankly, I could eat that salad all day. The quiche was fluffy, flavorful, and fantastic. I wouldn’t have been displeased if I could have had another quiche to go.

Dixie is one of the more unassuming restaurants in Bucktown, but it certainly deserves a look. Chef Charlie McKenna had a delicious little goldmine with Dixie, and I can’t wait to go for drinks and to enjoy the patio later this year.

The Bitches say: A+. Dixie is as cute on the outside as it is on the inside. The decor and atmosphere of this spot is perfectly appointed and the food was delicious and worth every bite.

One thought on “Dixie Brunch”