It had been a solid month since I’d been to brunch in D.C. Suffice to say, I was practically skipping to meet my sister at District Distilling Co. on a warm fall Saturday. We had a lot to catch up on and no plans for the rest of the day. 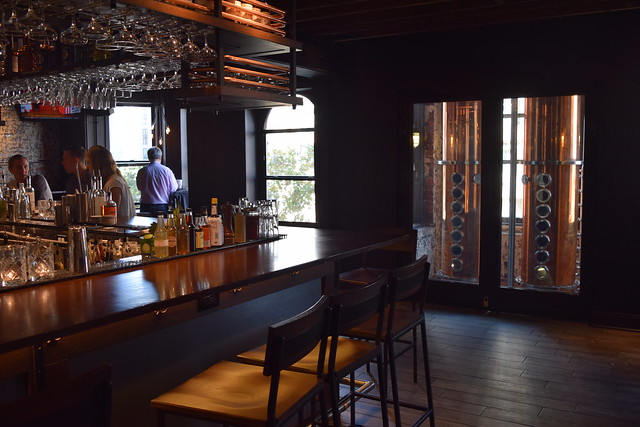 For the record, I’ve apparently walked by District Distilling, you have too, without noticing this gem of a space. It gets lost on the bustling, narrow corner where U Street meets 14th. To be fair, it opened recently and proudly bears the first distillery pub license in DC. The menu is described as seasonal American, with an emphasis on straightforward, satisfying food. We can get down with that. 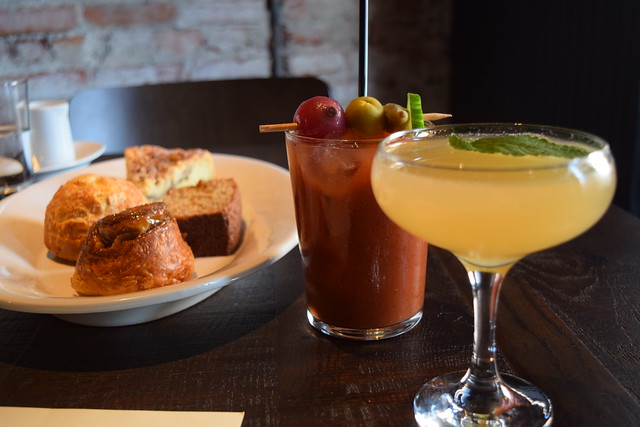 After ogling over the gorgeous, industrial space, complete with copper sills and exposed brick, we began the day with the Bloody Mary and Mexican mimosa, which was basically a mimosa with Mezcal and mint. It was the perfect amount of smoky and sweet. The Bloody Mary was flavorful and we appreciated that the glass wasn’t huge, as Bloodys can be filling.

My sister and I tend to gravitate towards savory foods, over pastries for example, but the bakers board with a black pepper Gruyere popover, banana bread, and other treats was calling our name this particular morning. When the plate arrived, our jaws dropped at the huge helping sizes. This didn’t stop us from diving into what was one of the best plates of gluten I’ve had in a while. 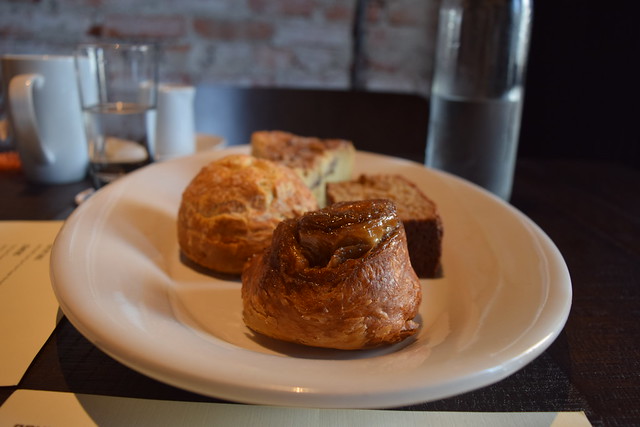 The popover was huge, warm, and gooey on the inside, thanks to the melted cheese. The banana bread was heaven, it had a crunchy exterior and was also warm on the inside. Serious bonus points for all of the pastries tasting like they quite literally came straight out of the oven. The last bites of the crunchy but sweet cinnamon bun were going faster than hot cakes. 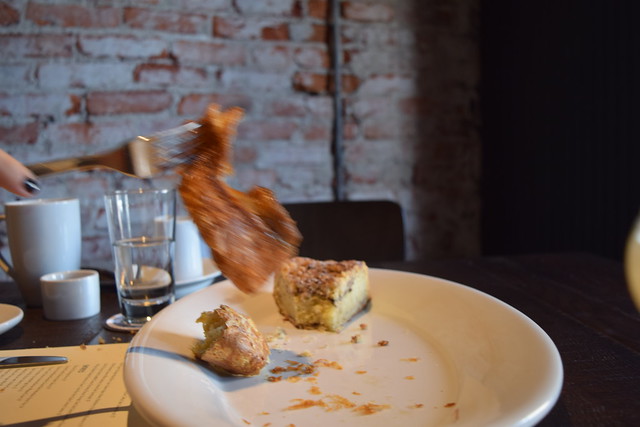 The table next to us ordered the pancakes and we were intrigued, but after indulging in the bread plate, we decided on other savory dishes like the roasted beets and greens salad. The smoked salmon on latke immediately caught my eye. That coupled with the waiter highly recommending it, led us to order the dish as a starter. It was served atop an absolutely delicious potato pancake, topped with fresh lox, a tasty, light aioli, and a heaping of dill. 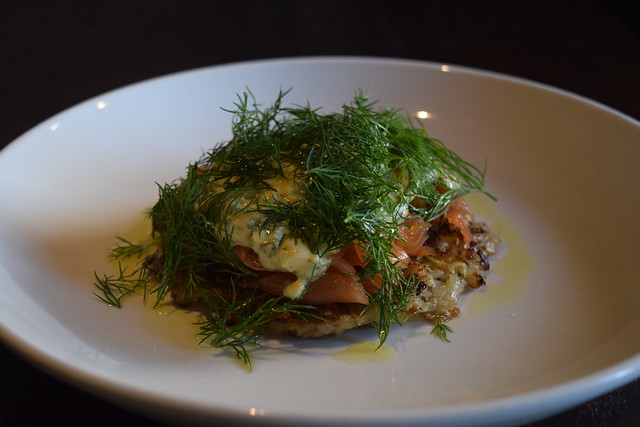 We couldn’t decided between the grilled Caesar salad and the beet and brie salad, but decided on the latter. When it arrived, we were pleasantly surprised by the perfect sharing portion. We also appreciated that the salad was fixed with just the right amount of dressing, because nothing ruins a salad like too much dressing. We wished the brie was integrated into the dish a little better, but nonetheless we awkwardly scooped a helping with each bite. 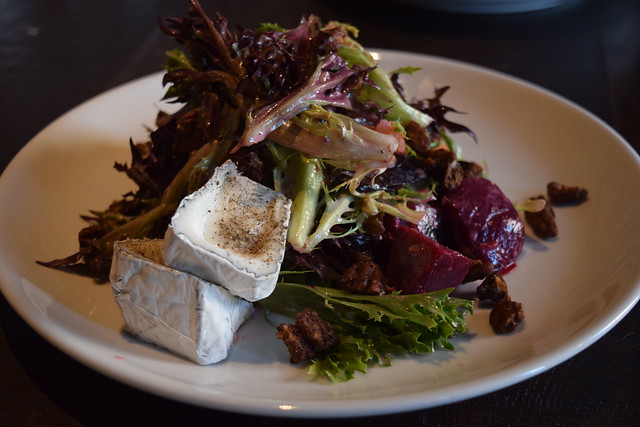 Overhearing our salad dilemma, our server graciously and unexpectedly brought out the grilled romaine Caesar salad for us to try. Let’s get this out there, grilled salads are very bourgeoisie. We know. And honestly, if they’re not done right, they can taste like soggy, burnt charcoal. This version, however, restores our faith in the upscale approach to lettuce. It was crispy, oily, and flavorful, with the right amount of crunch and dressing. 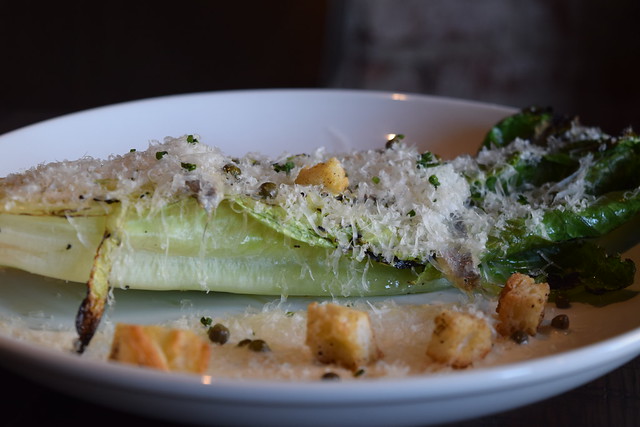 The burger was no joke. We’re talking double patties, bacon, cheese, the works. We honestly didn’t know which was better—the burger or the perfect side of curly fries. 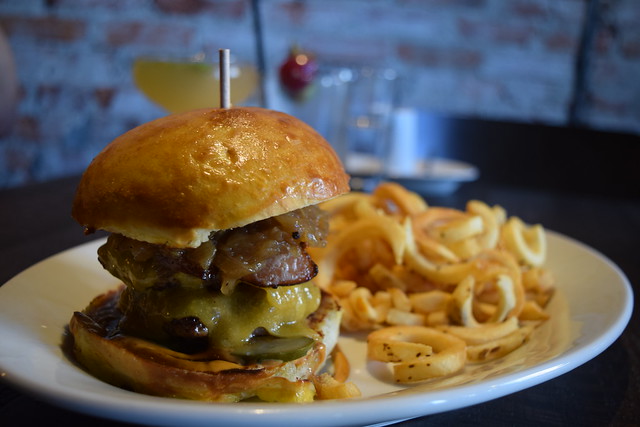 But wait there’s more. Just for good measure we tried the mussels. They were surprisingly good, but served in a smaller portion (thank, goodness) than we expected. The garlic white wine sauce was very tasty and provided a great dipping sauce for our curly fries. This would be a great dish to share at the bar for happy hour. 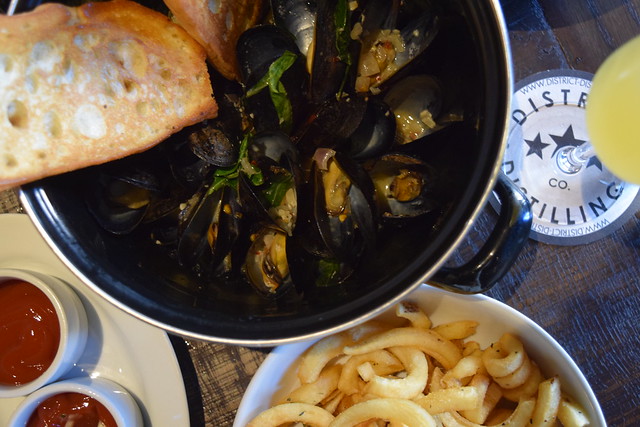 As if we weren’t bursting at the seams, Chef sent out the biscuits and gravy with a fried egg on top. Apparently, this was off-menu, but if you’re reading this, we would like to suggest adding this to the repertoire. There’s no shortage of biscuits and gravy at brunch in the District, but this iteration was insanely good. I loved that it was a smaller, open-faced portion of the otherwise hearty dish. It seemed less intimidating this way. The nutmeg in the gravy paired with the light-but-crunchy biscuit was just too good. We took as many bites as we could before tapping out. 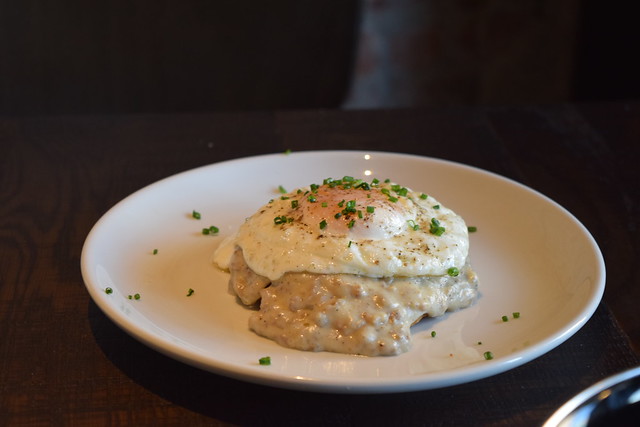 Christina has been my date to countless brunches all over Washington and we both agreed that this one ranked in the top five on our list. The service, the space, and the food were outstanding. Plus, we loved that you could go on a distillery tour after brunch in the same building—who doesn’t love a good post-brunch activity?

Stay tuned for our review of the distillery coming later this month!

The Bitches say: A. Bring a date, bring your family, bring a friend. There is something for everyone on this menu, plus you can make a day of it by capping off your brunch with a distillery tour.