It’s no secret that the Bitches adore Chef José Andrés. And, my personal affection for the charismatic Spanish chef, coupled with my frequent jaunts to Miami for brunch and sunshine meant that I would soon enough visit Bazaar Mar, the latest—and greatest—Think Food Group outpost from Andrés and his team.

There are Bazaar by José Andrés restaurants in Las Vegas, Beverly Hills, and South Beach—a collaboration with the upscale, glamorous yet playful SLS hotels by SBE hotel group—known for its posh hotels and trendy night clubs. 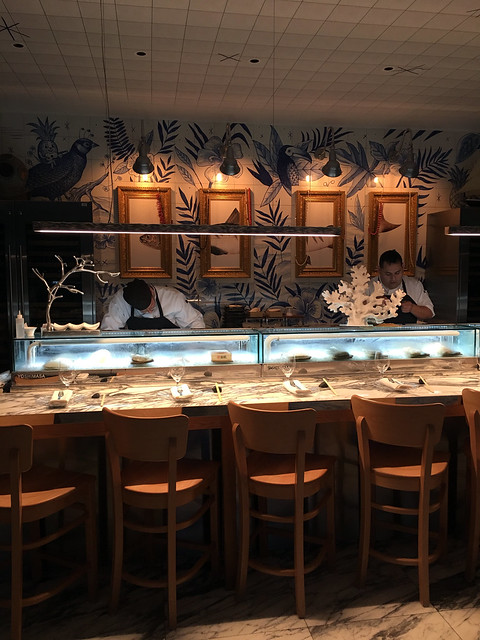 We’d brunched at Bazaar at SLS South Beach in December and loved every moment of the pristine, playful setting, delightful service, and Spanish-Cuban fare and incredible buffet. You can read the review here. 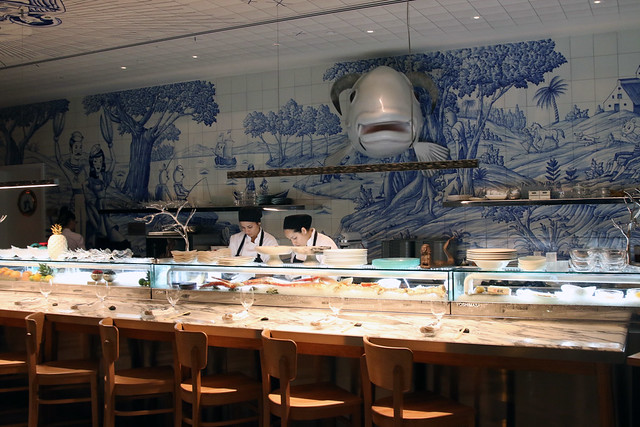 Our dining itinerary had been jam-packed, with brunches at Bakehouse Brasserie, Juvia, and OTL, a cute little café in the Design District. (Click to read the reviews—and enjoy our full Miami City Guide, coming soon.) Miami is one of my favorite food cities—it has all sorts of playful, kitschy restaurants and cocktail bars, each restaurant is a work of art in itself, and the sushi, seafood, and ceviches are incredible. That said, I hadn’t seen anything yet until we extended our weekend of sunning and eating through to Monday evening, with dinner at Bazaar Mar.

The seafood-centric restaurant is located in the brand new SLS Hotel in Brickell, the waterfront part of downtown Miami populated by the beautiful young professionals who actually reside in Miami full time.

Bazaar Mar is an absolutely stunning spice: white, glamorous and playful, with a blue-and-white color palette. Upon entry, you’re greeted with kitschy, maritime-themed china blue and ivory wallpaper, with mermaids, dolphins, and sea captains alike. There’s a stunning marble sushi bar, and two additional rooms of gilded, glam dining rooms, with tile flooring and glamorous chandeliers. There are cocktail carts, giant fish on the wall, and tanks full of seafood. 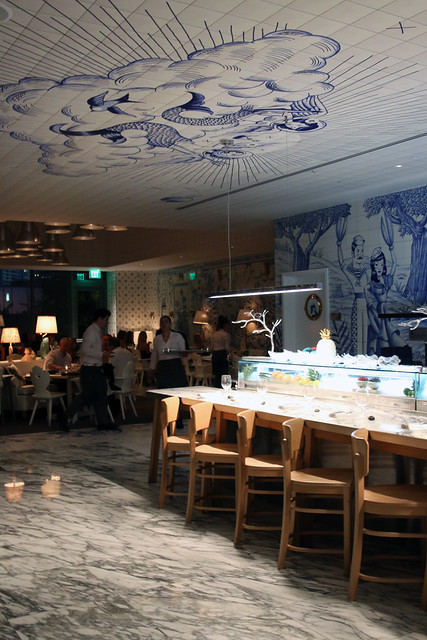 As expected from a restaurant of this caliber, the service is pristine, with several tiers of management and servers attending to each table. Our server, Trevor, was an absolute treat, as was the delightful manager on duty, Rafaela. Trevor gave us a tour of the seafood tanks, which were filled with lobster, clams, oysters, cockles, crabs, abalone, and a few other creepy crawly types of seafood I’ve never eaten before. The scallops and abalone are so fresh they are still alive when they are served at your table—much like the stunning sea scallop ceviche at José’s China Chilcano in Washington, D.C.

We began with cocktails, of which there are quite a few. I love wine, and we were having seafood, so I selected the sherry and sparkling sangria. Served in a tumbler with fresh fruit, the cocktail was stunning, fresh and light. 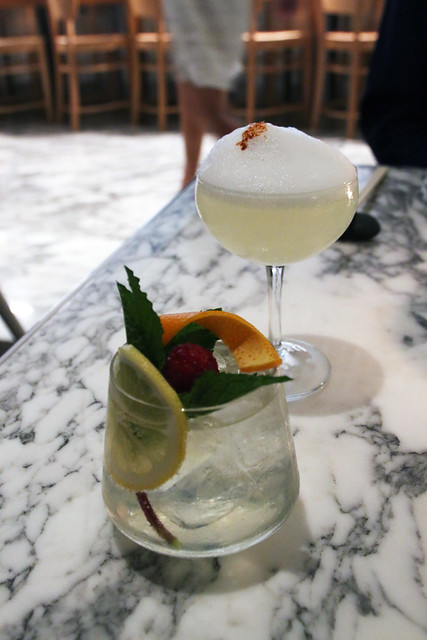 Andrés is known for his molecular gastronomy, which means there’s a lot of foam and creativity involved. While we missed out on the tableside molecular Capriñhas, we did try the Salt Air Margarita, which was a classic margarita with Cabeza tequila, topped with a sea salt foam, rather than a salt rim. It was like nothing we’d ever imbibed. (You can try something similar at Oyamel in D.C.) 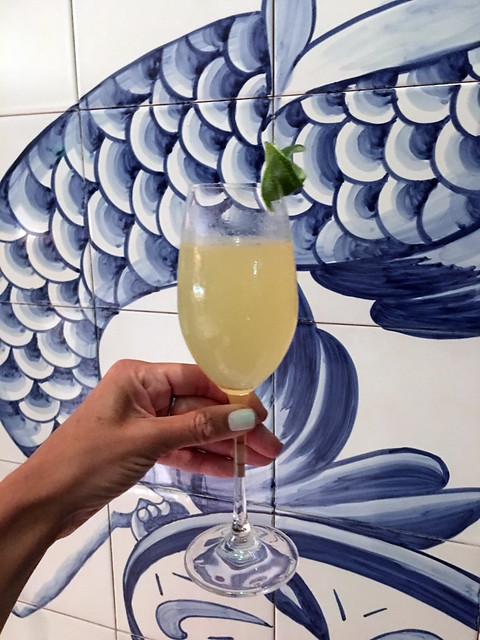 Later, we tried the Bees & Honey, a cocktail made with lemon, honey, truffle and Grey Goose. This would certainly be a place I would frequent for a late night cocktail, particularly given that the dark, black-and-gold bar has an entirely different, sultry vibe. 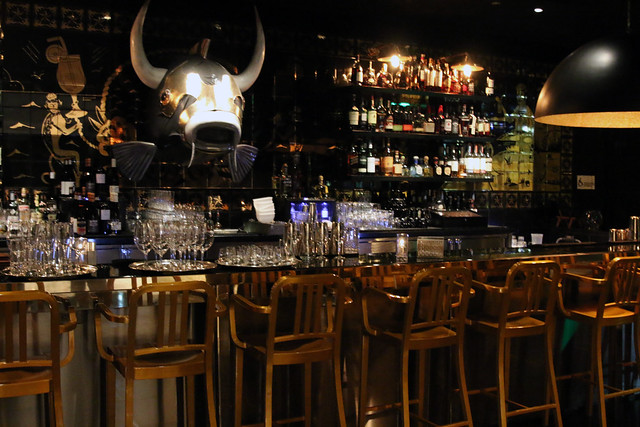 First, we received the marinated liquid olives, a deconstructed, liquid molecular olive—it was like nothing my dinner date had ever tried. I would say the same, but I’d recently sampled similar olives by being fortunate to attend a party catered by minibar by José Andrés in D.C last month.

I love oysters, and I knew I had to have them given their utter freshness and unique preparation. We ordered a half-a-dozen raw oysters, fresh from the tanks and served chilled with a fresh Florida citrus and hearts of palm. 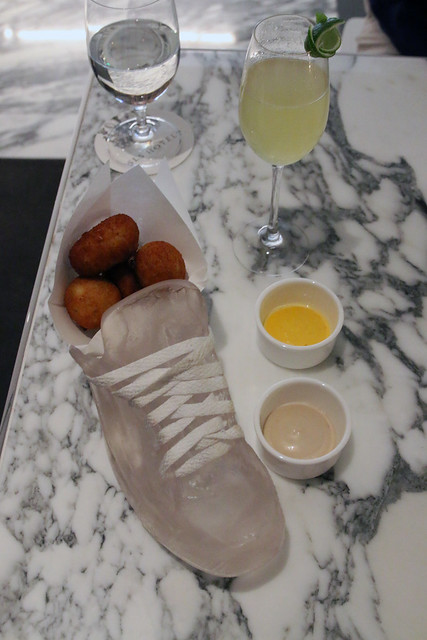 While the food was incredible, it’s worth noting the stunning, playful plating of the dishes. For starters, the lobster croquettas were served in a shoe. I have no idea where you’d find a glass-blown sneaker, but I’d imagine it would be hard to come by. There were two types of fritters: lobster and shrimp, oblong shaped and served in a circle, each with its own dipping sauce. I had been informed to be careful, as there’s an appropriate sauce for each fitter. Dinner is an experience, you see, and you should act accordingly. 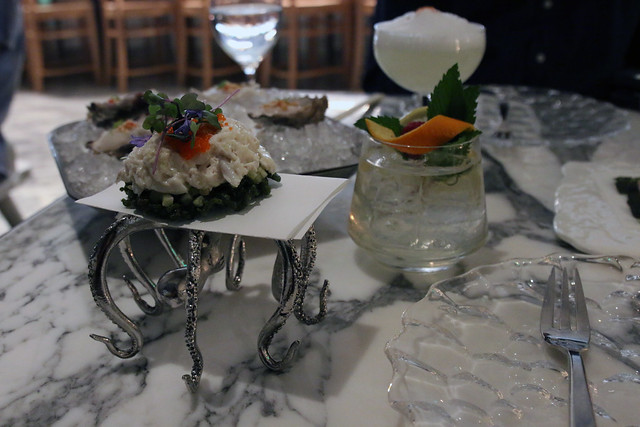 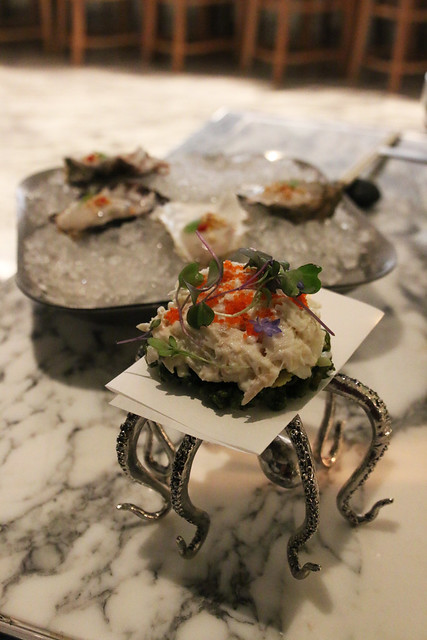 The Bagel and Lox is a crowd favorite, so we knew it needed to be ordered. The Everything bagels were baked into the shape of fish—yes, cute little fish—then layered with oh-so-thin slices of smoked salmon, dots of cream cheese, and dots of pickled onion. I initially thought this was too boring of a dish to order, and I was quite wrong. 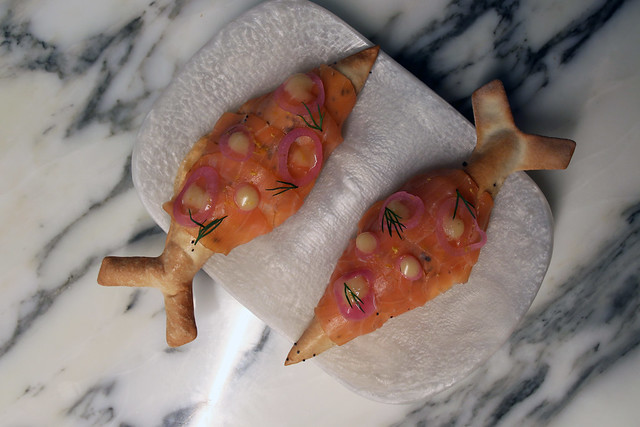 José’s restaurants and dishes pay tribute to his Spanish culture, or to the authentic culinary cultures of places around the world. The Po Boy José does just that, with fried baby squids, served in an impressively soft, buttery and fluffy brioche bun, slathered with aioli. Were both a bit intimidated by the fried squid, but bravely bit in after a cocktail of liquid courage. 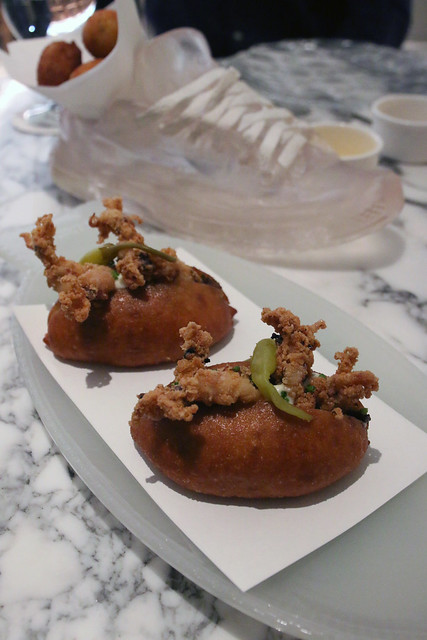 My second favorite plate was without question José’s Asian taco, as it involved my two favorite things: fresh hamachi and caviar, served open-faced on seaweed to roll up and pop in your mouth. They were delectable—and I definitely snatched up the third. Good thing my dinner date doesn’t love caviar like I do. 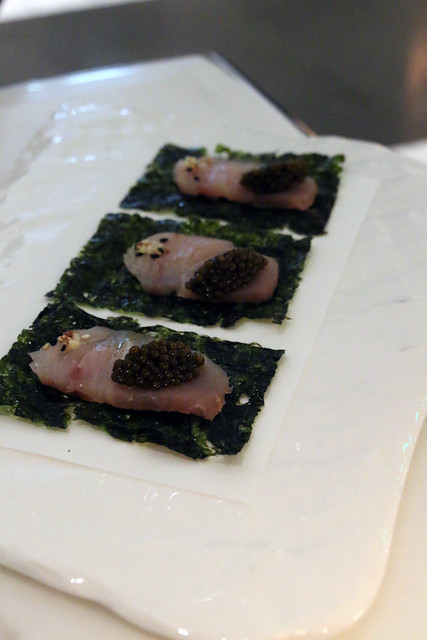 The octopus was beautifully grilled and plated, it was served simply, with dollops of black garlic oyster sauce and Meyer lemon. It was warm and crisp, with that signature, slightly rubbery yet delicious grilled octopus texture. 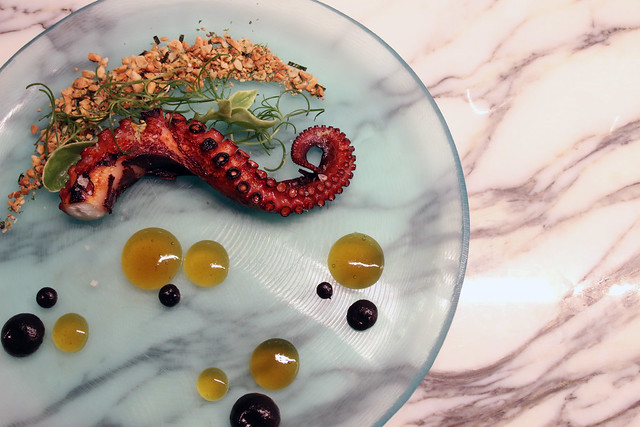 We were slightly intimidated by the whole fried fish, a breaded and fried whole Branzino, served simply with a mix of an almond tartar sauce with a Mojo verde. We were so full—but we tried the moist, flaky white fish—which was perfectly fried and paired beautifully with the elevated tartar sauce. 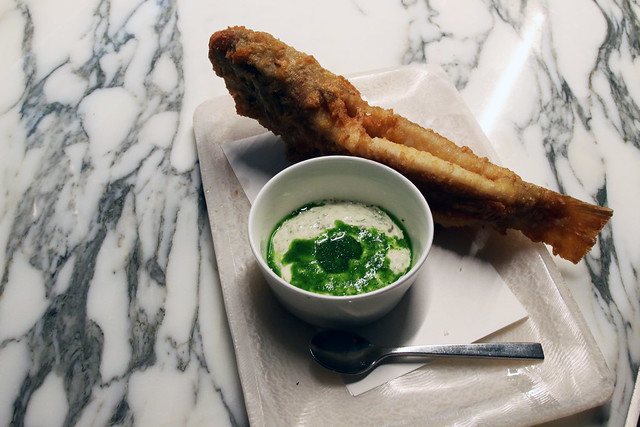 Naturally, as Bitches we’d be remiss not to order the tuna tartare, so we shared the enormous Tuna Ceviche Nikkei, a bigeye tuna, topped with a soy-cured egg, puffed quinoa, chunks of avocado and diced jicama, and red onion. It was a classic interpretation that was packed with flavor, and exactly what we needed amid all the other adventurous dishes. 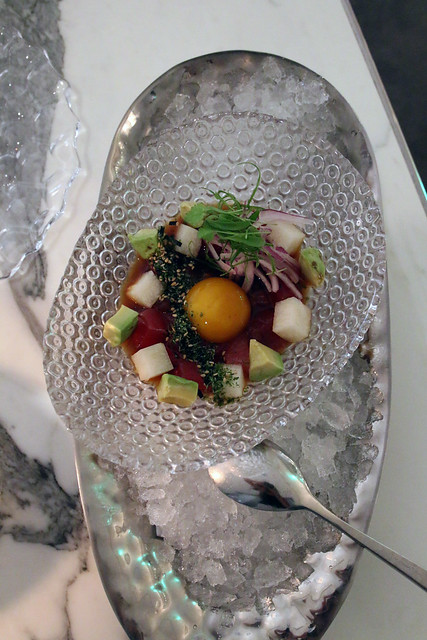 There’s an impressive selection of vegetables on the menu—though it’s hard to think about veggies when presented with the highest quality raw fish. I love mushrooms, so we ordered the roasted wild mushrooms—topped with a creamy anchovy aioli and pickled beech mushrooms.

Lastly, we also tried the smoked oysters—served in an enormous marble dish, with the lid removed tableside for a smoke show to reveal oysters cooking in some sort of molecular magic. Don’t ask me to explain—but it was delicious. 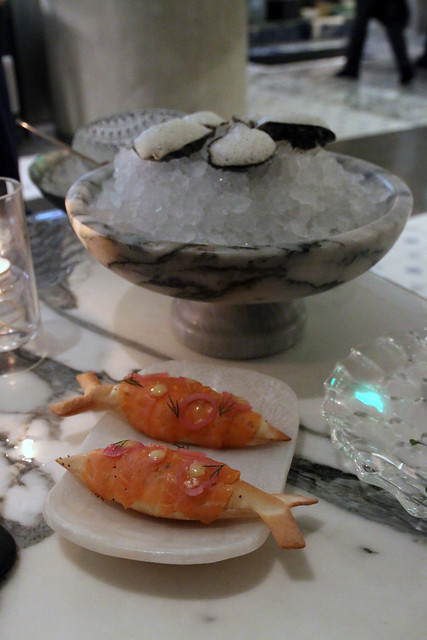 We were ready to throw in the towel, but Trevor insisted we try dessert, explaining that Bazaar Mar’s desserts are both decadent and memorable. Chocolate soufflé is my favorite dessert, something my father makes from scratch annually on my birthday. This chocolate soufflé was prepared in the classic fashion, served in a trivet simply with a side of house-made banana ice cream. As nothing José does is normal or expected, the bottom of the soufflé was filled with layers of cooked banana. It was oh so satisfying, rich yet light at the same time. 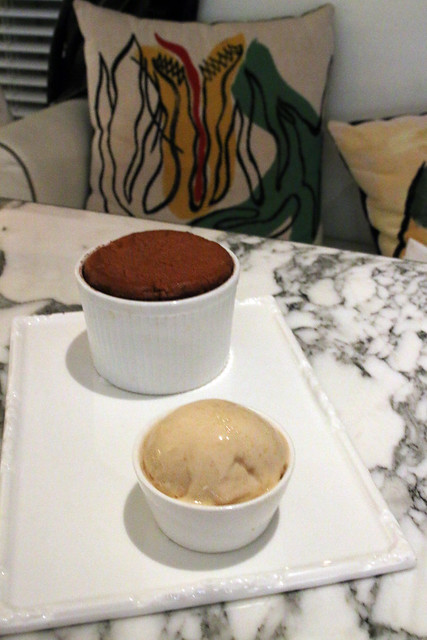 Another playful plating was the “Who Lives in a Pineapple Under the Sea?” No doubt an homage to SpongeBob. This enormous glass pineapple was filled with pineapple shaved ice, and a squeeze vial of Green Chartreuse liqueur, which you pour over the pineapple. It was boozy and light—and we love playing with our dessert. 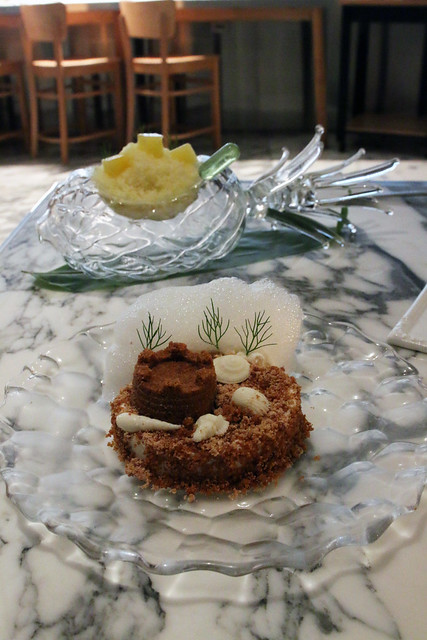 We concluded our meal at Bazaar Mar in the most perfect of fashions for a luxurious, memorable meal in Miami: with a deconstructed key lime pie cheesecake, crafted into the shape of a seashore. The key lime ice cream was utterly tart and fresh, topped with graham cracker crumble crafted into sand and sandcastles. The seashells were edible white chocolate, and the sea foam was lime air foam. It was the best—and prettiest—key lime pie this Florida girl has ever had. 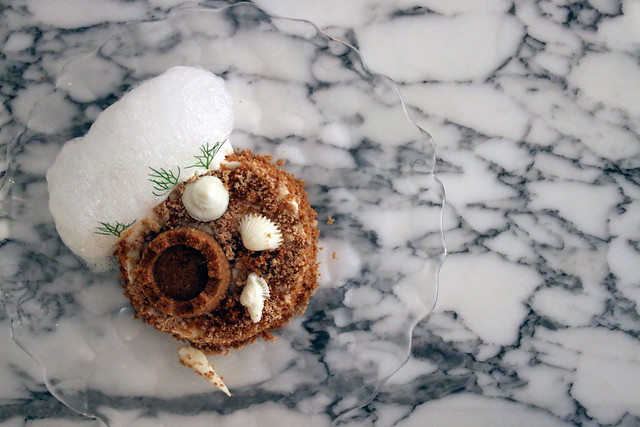