A good brunch is hard to come by in my neighborhood of Hell’s Kitchen. There are a ton of great bars for after-work drinks, sure. But when it comes to brunch, most options aren’t memorable or exciting. Enter Dianne & Elisabeth. A bit of a trek over on 10th Ave., this wine bar had been featured in a handful of must-try brunch lists, and I opted to try it for myself before catching a movie one Sunday. 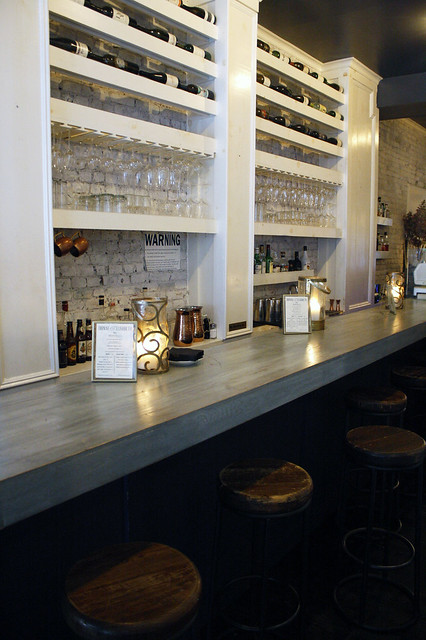 While a tad cramped, the restaurant has an industrial chic look with whitewashed brick walls, Edison light bulbs, and sleek, simple furnishings. We were only the second table in the place when we first arrived around 11:30 a.m., but the tables quickly started to fill up and the room was nearly packed by the time we left. 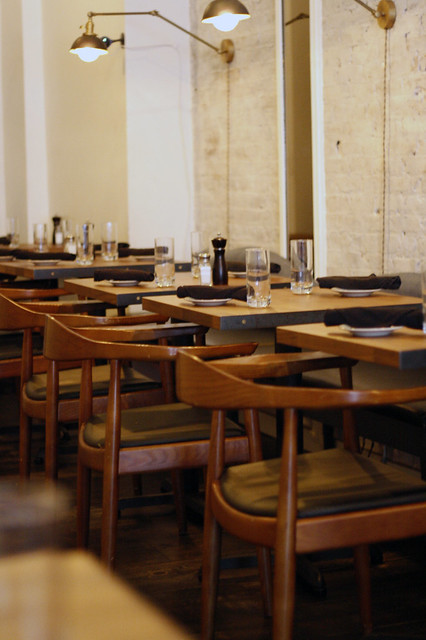 On top of a classic American brunch menu (with a few twists here and there), Dianne & Elisabeth’s offers a bottomless drink option at $19 per person for 90 minutes. You can alternate between unlimited Bellinis, mimosas, Bloody Marys, Screwdrivers, and Moscow Mules. 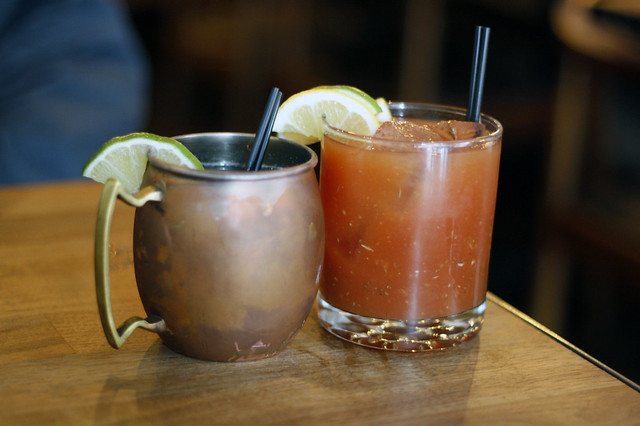 My fiancee, Fields, opted for a few rounds of Moscow Mules, taking full advantage of the fact that this beverage is rarely found on your typical bottomless brunch menu. I started with a few Bloody’s, then switched to Bellinis. All of our drinks were fine–the celery salt in the Bloody Mary particularly stood out. Our service could have been a tad more attentive, but there were only two people working as the place quickly filled up. 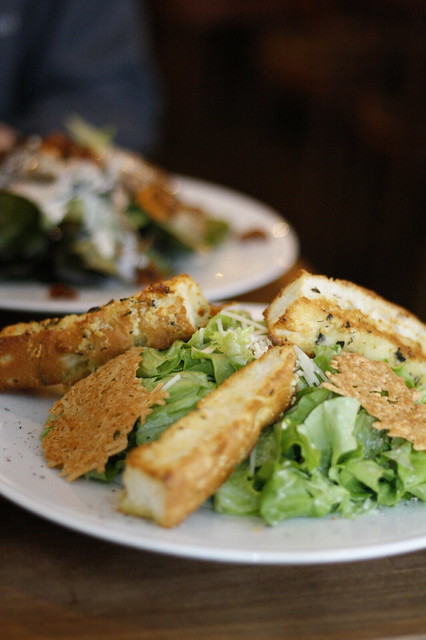 We agreed to start with a few things on the healthy(ish) side, before really indulging in our sweet tooth. The Caeser salad looked beautiful, and tasted just as good as it looked. The dressing was fairly fishy, which we didn’t mind, and was a vinaigrette rather than your traditional, heavy cream dressing, which made it seem lighter. However, we would have preferred Romaine lettuce instead of butter lettuce, just for the added crunch. The thick croutons were essentially a combination of garlic bread and your traditional crouton, and the Parmesan crips were a nice touch for texture. 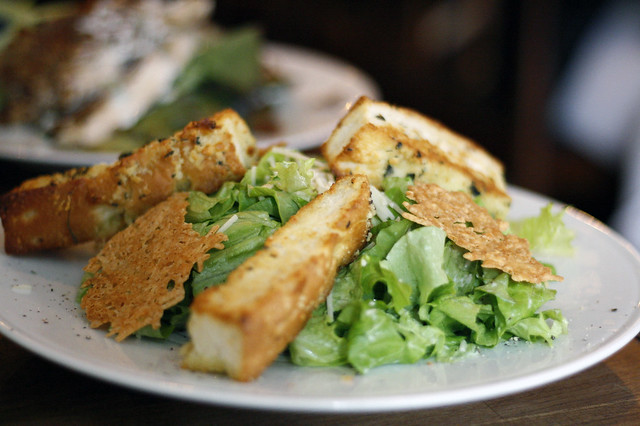 The beau was in a savory mood and insisted we try the Chicken Paillard, which honestly would not have been my first choice. Traditionally, Paillard is a French way of cooking, where thinly pressed meat is grilled or sautéed very quickly.  The chicken was indeed thin, served over a bed of mixed greens with buttermilk ranch dressing and roasted carrot chips. While it was meticulously seasoned and had a nice flavor, we felt it belonged under the salad section  of the menu since it was served over lettuce, rather than under the entree section. But Fields loved it and scarfed it down, as he was nursing a bit of a hangover and wanted something on the lighter side. 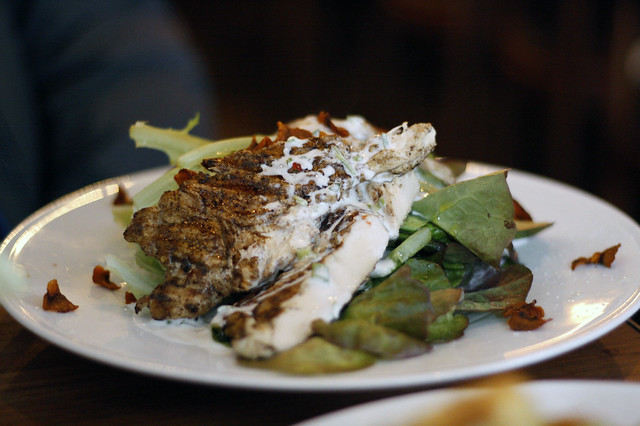 We’d never seen lemon meringue waffles on a brunch menu, and immediately ordered those–along with the maple sausage corndogs–to round out our meal. The corndogs were the perfect iteration of sweet and savory. The breakfast sausage and syrup combo worked really well together and was executed in a really innovative way. 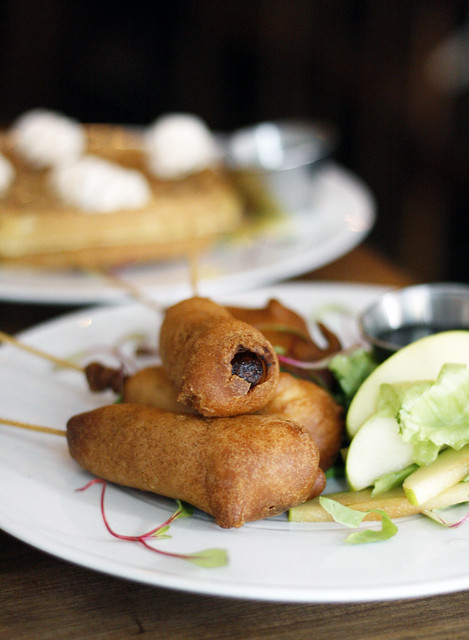 The waffles were absolutely decedent. What appeared to be dollops of whipped butter on top was actually mini meringues–the cutest! The lemon sauce was the perfect consistency and it tasted like freshly-zested lemons–no bottled lemon juice here. We didn’t feel the need for the syrup, as the sauce was slightly sweet. To be fully transparent, I could have eaten this entire dish on my own, with no help from Fields. 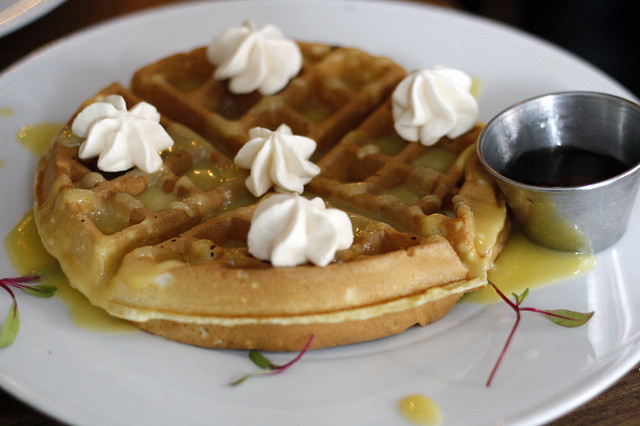 The Bitches say: B+. Dianne & Elisabeth offers inventive takes on classic brunch dishes and a killer bottomless brunch deal. While not every dish blew us away, they were all executed nicely.