It had been awhile since the Bitches had brunched together, so it called for a location worthy of the occasion: Del Mar, Fabio Trabocchi’s newest restaurant, located on the Wharf. The stunning, Spanish restaurant has been getting plenty of buzz—including a recent New York Times nod, and we were beyond excited to try it. 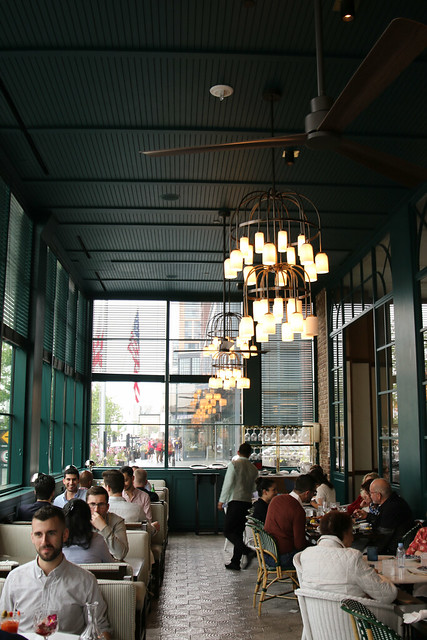 The setting is nothing short of serene: high ceilings, floor-to-ceiling windows looking out on the Potomac River. The color palette is dark green, blue, white, and gold, with a glamorous, gilded vibe that’s nothing short of jaw-dropping, yet nautical so not out of place.

We were seated in a comfy, windowside booth in the bright and airy atrium located at the front of the restaurant. As this was a girls’ brunch, we were graciously greeted with bubbly—cava, of course. Then, we moved on to the most stunning sangria, which is available by the glass or in a carafe. The sangria was served in gorgeous, large crystal goblets, packed with fresh fruit ice cubes and decorated with edible flowers. 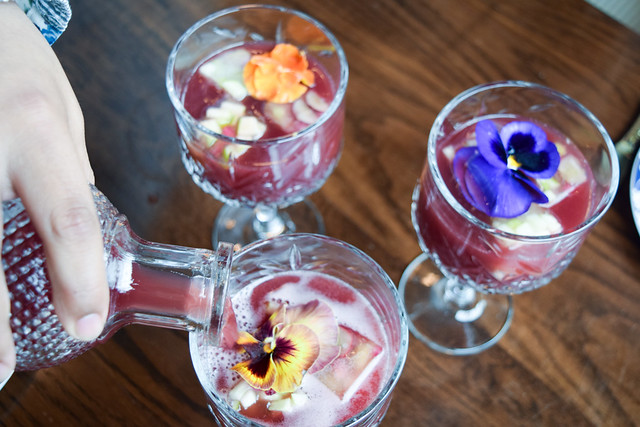 We began with an assortment of classic Spanish tapas—croquetas, patatas bravas, gazpacho, and pulpo, and we each had a different favorite. Annie loved the truffled potato croquetas, which were topped with thin strips of cured Jamon Serrano. Meanwhile, Cori Sue loved the fresh strawberry gazpacho, which came in a massive bowl, poured tableside. Steph was very into the pulpo, grilled octopus, which was served in a flavorful sauce atop smashed–very different than mashed–moist potatoes. The multi-colored fingerling potatoes topped with a spicy aioli were devoured by all. 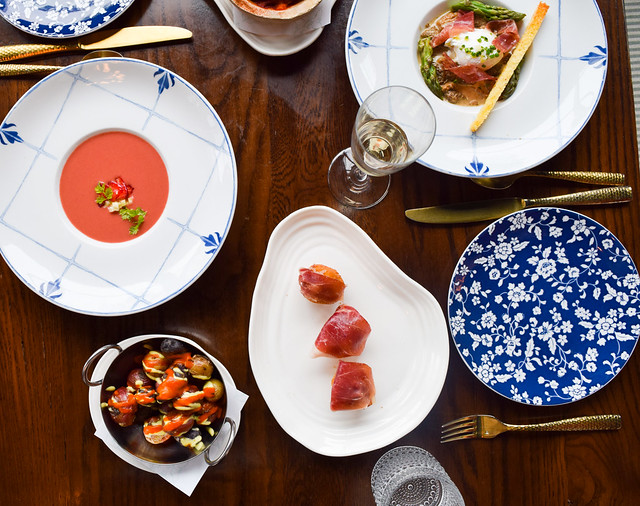 We were all obsessed with the huevos con setas y jamon. This small bowl filled with a poached farm egg, morel mushrooms, jamón Mangalica, and asparagus tips had the most savory broth—we could have slurped it like soup but that would have been decidedly unladylike. 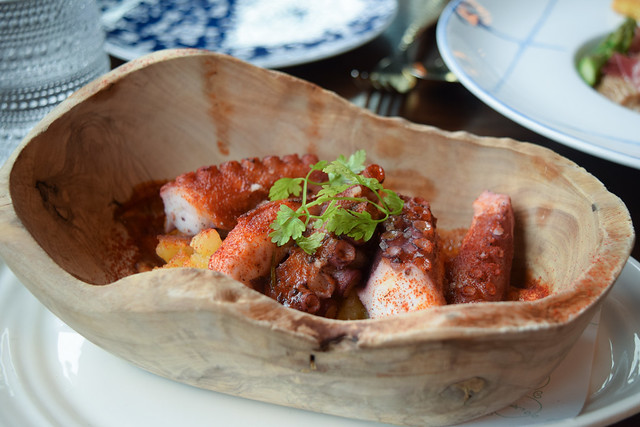 Eager to try the brunch entrees, our group settle on the cazuela de bogavante, a Mallorcan-style lobster dish with confit potatoes and poached eggs. This dish was tasty enough, but paled in comparison to the chuleta de cordero rebozada. Maybe we were feeling overloaded with the seafood dishes, but this manchego-breaded lamb chop topped with a sunny-side up egg and Romesco sauce was the perfect swap for our palates. The delicate cutlet was full of flavor, perfectly crispy on the outside, and left Annie wondering if she could recreate this dish for brunch at home. 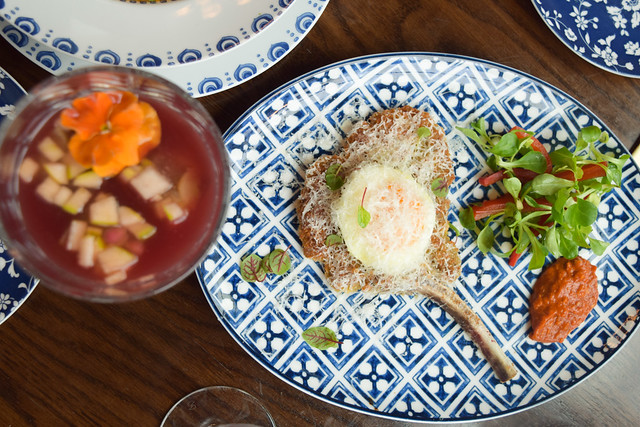 You can’t visit Del Mar without ordering one of the massive paellas, available in table-size servings of 2-4 people, or 4-6 people. Naturally, we went with the seafood paella, which was packed with lobster, jumbo shrimp, mussels, and calamari. The seafood was impossibly fresh, and there were very generous portions of lobster included—a tail for each Bitch, in fact. Perhaps the best part of the paella is that your server will plate it for you, which includes deshelling each lobster tail. The mussels were packed with flavor, as was the classic paella rice flavored with saffron and other spices. 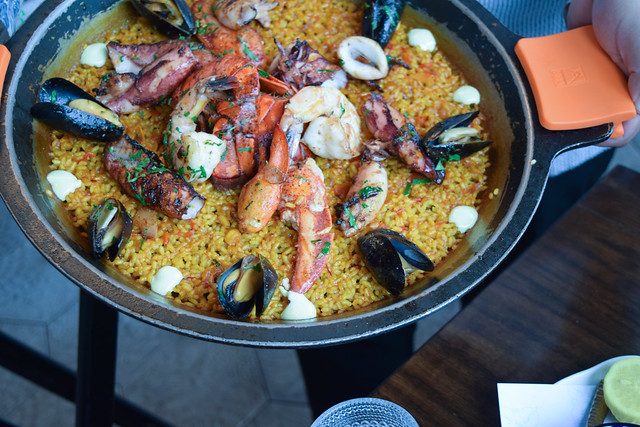 As our three-hour brunch meeting wound down, we were far too stuffed for dessert. But, it would be rude to leave a Spanish restaurant without enjoying churros, so we ordered the churros and the flan. The flan de Maria was a classic, moist and jiggly (technical term) vanilla custard topped with blood orange and blood orange meringue. The citrus added a beautiful, tangy flavor to the rich custard, and it was nearly too pretty to eat. 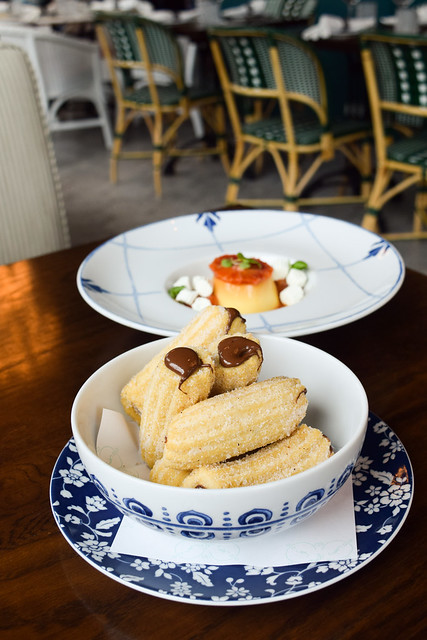 While the flan was divine, nothing can compare to hot, fresh, house-made Nutella churros. The fresh, fried Spanish churros were tossed in cinnamon sugar and filled with warm, creamy hazelnut chocolate. These churros were not as crispy as some other versions around the city, but delicious nonetheless–isn’t anything with Nutella amazing? It was a generous serving, too—of about eight churros. Cori Sue ate two—and brought the rest home to her boyfriend, as they were too good not to share.

The Bitches say: A+. A divine dining experience with incredible Spanish fare, fresh seafood, impeccable service, and a gorgeous setting. It’ll set you back a pretty penny, but it’s perfect for a special occasion, or when your parents are in town.