It was one of the first gloriously warm spring weekends and I was on a mission to soak up the sun for the entire day. I woke up energized and sans hangover. According to my darling roommate, Kara, it was due to the fact that I wasn’t quite sober. I have a habit of checking my Fitbit app and was pleasantly surprised to see that my late night activities resulted in more than 8,000 steps already just from hopping all over on H Street. If I’m going to have a wild night, I might as well counter my calorie count from excessive drinking through epic dance parties. 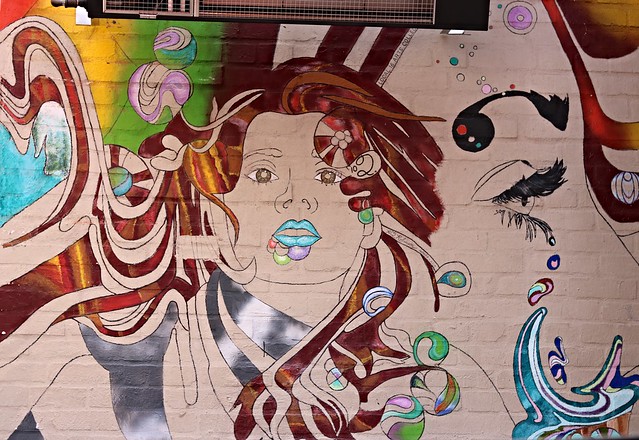 Kara and I were craving carbs and sunshine and I knew just the spot. I’ve been to Local 16 a number of times for happy hours and such but not for brunch in recent years. I read our previous review from when HBIC Cori Sue had visited. I decided it was time for a revisit. Local 16 does not accept reservations unless you are part of a large party of eight or more. I was apprehensive about whether we would get a spot on the rooftop. 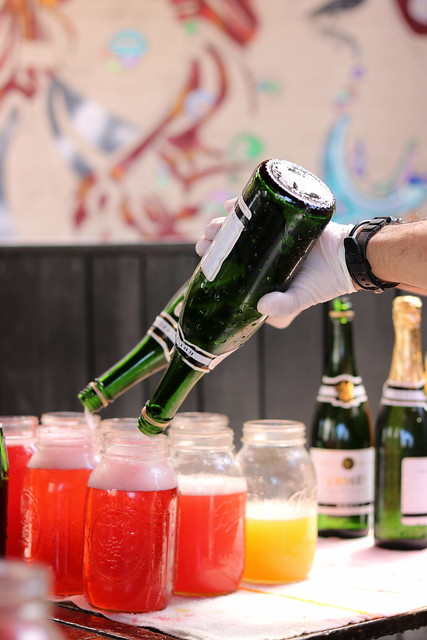 Everyone that knows me is aware that I am beyond obsessed with patios and rooftops. It’s a mandatory requirement to visit at least one rooftop with a view when vacationing with me. After what felt like a never-ending Uber ride, we finally made it to our destination. The bouncers check your ID upon arrival at Local 16. I used to be frustrated getting carded but now that I’m approaching 29, looking youthful is actually a blessing in disguise.  The hostess told us the restaurant was fully booked for brunch so waiting for a table was not an option. She politely let us know that we could try to snag a spot at the bar. So we made our way upstairs—and I always notice the framed picture of Mickey Mouse when I go up the staircase to the rooftop. 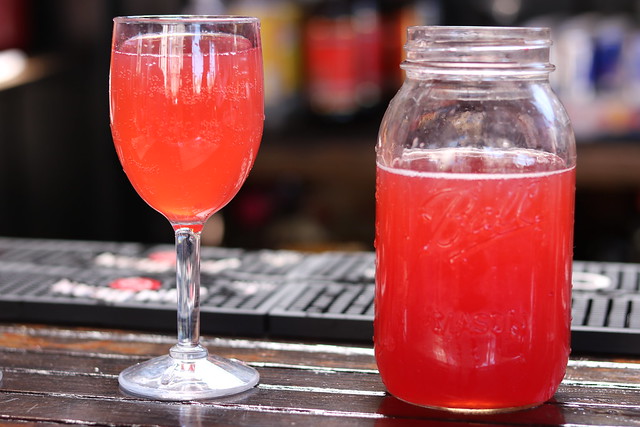 We immediately noticed a number of large parties including a ridiculously long table for a party of 25. I don’t even think I like 25 people enough to have brunch with them but I commend them for pulling that off.

The bar was fairly full but had some open spaces for standing. The bartender, whose name was Paul, noticed we were frantically searching for a spot. Paul kindly told us he would make space and grab stools for us. Jackpot! Local 16’s rooftop has eclectic and edgy decor which provides for a relaxed and chill atmosphere. The tasseled lanterns and vibrant mural truly set the tone.

The menu changed recently and includes a section just for Afghani entrees. The $27 bottomless brunch can’t be beat with the expanded beverage list. The deal includes an entree and your choice of mimosas, pomegranate mimosas, Bellinis, Bloody Marys, white or red sangria, and a number of light beers. In the past, you were only able to get mimosas and Bellinis. I saw that the sangria was already made and sitting in the sun, which frightened me so I went with the safe choice and stuck to the Bellini. Kara was intrigued by the pomegranate mimosa. The drinks arrive in a wine glass and a large mason jar filled to the top for easy refills. The Bellini was perfect: not too sweet, not too strong, but just right for a Sunday afternoon. Kara really enjoyed the pomegranate mimosa and noted it was a nice change from mimosas made with orange juice. She also said it actually tasted like real pomegranate juice and not pomegranate concentrate mixed with champagne. 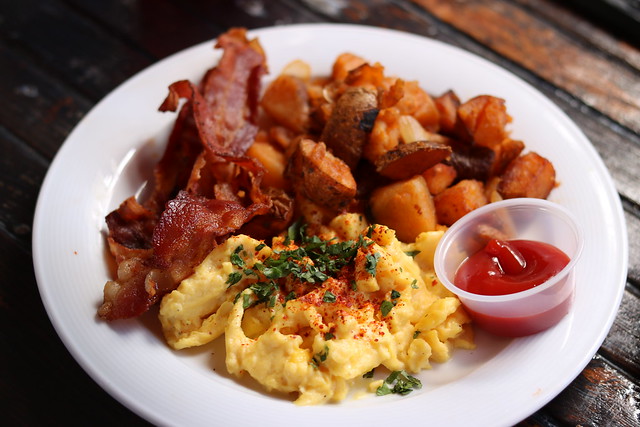 I was intrigued by the Afghani offerings but I wasn’t sure how that would sit with me especially since I had plans to continue day drinking on a friend’s rooftop after. I decided to go with the pumpkin pizza while Kara opted for the breakfast platter. She’s your classic bacon and eggs girl from Buffalo.  While we waited for our food, we watched the bartender make a bunch of mimosas and Bellinis for the servers to grab easily. I will say, Local 16 is rather efficient when it comes to bottomless brunch beverages. As soon as they see your mason jar depleting, the servers come over and refill it with champagne. You’re basically never asking for more since they watch you like vultures to make sure you’re never with an empty glass. 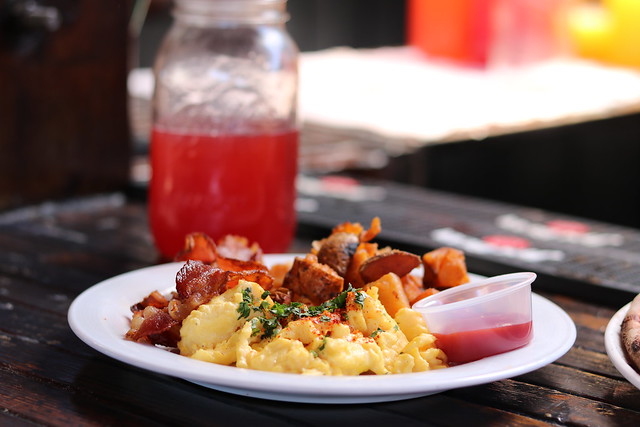 Our food arrived pretty quickly. The breakfast platter comes with two eggs your way with home fries and a choice of bacon, spicy lamb sausage, or chorizo. Kara obviously went with bacon. Everything on her plate had a kick to it. She tasted onion with the home fries and enjoyed it. The bacon was cooked well and the eggs were spicy and scrambled to perfection. She would certainly order this again. 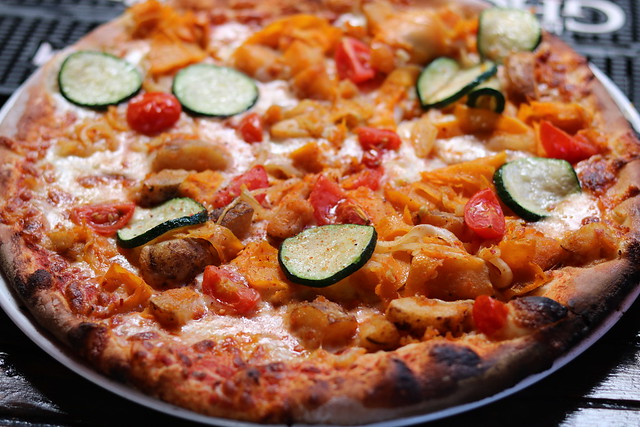 The pumpkin pizza captured my attention. It comes in a generous portion size and can easily be shared between two people. The pizza is vibrant from the fresh vegetable toppings including zucchini, caramelized onions, cherry tomatoes, and potatoes. You also have the option for an egg over easy for the full breakfast pizza experience. I was afraid the pumpkin and caramelized onions might make it too sweet but the pizza but was anything but sweet. The spiced potatoes were a nice surprise and basically tasted like home fries on a pizza. The pizza was phenomenal and filled me up quickly. I couldn’t handle more than three slices but I would certainly come back for more.

After our meal, Kara and I continued to drink at the bar and people watch. We witnessed the group of 25 leave and a large bridal party dressed in shades of pink and white stroll in. We chatted longer with Paul, who really took care of us throughout our meal. He let us know that most guests are part of a large party for a special occasion and brunch is usually booked up quickly during the warmer months. While it may be difficult to walk in and be seated, it’s certainly not an impossible task.

You can’t beat the price point of the bottomless brunch for what you’re getting at Local 16. The food was solid and the drinks were free flowing on the edgy rooftop that’s perfect for large parties. The attentive and efficient service was an added bonus.