Can we talk about poutine? The word sounds so dirty, but the stuff is so good. Who doesn’t love a bowl of super hot, salty, thick French fries covered in cheese curds, bits of meat and gravy?

The experience of a great poutine is almost as filthy as its moniker. This is a knife-and-fork situation: It’s the most gluttonous, greasy comfort food you can imagine. And when it’s on a brunch menu, my hangover aches to order it.

David’s Cafe on Saint Marks Place invited us to check out the new spot and its brunch menu. So I gathered a gaggle of girlfriends and bribed them to trek through two feet of snow, post-blizzard. Poutine, girls. It will be worth it.

We convened in the little French-inspired restaurant and were pleasantly surprised. In the midst of rough, grungy Saint Marks, David’s Cafe is a sunny oasis, hiding out quietly and just observing the chaos from behind its big windows. 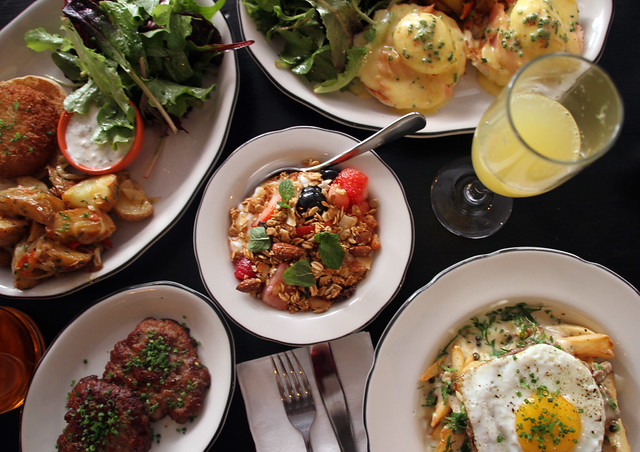 We snagged a table and dove right in with coffees, which were lovely and Lava brand. I ordered a Bloody Mary but, to my despair, the restaurant doesn’t have its liquor license—only beer and wine; the horror. Sunday mornings sans an ice cold, spicy Bloody throw me off kilter. Grumble.

Mimosas on the table (side note: they serve Prosecco in carafes), we ordered the Saint Mark’s Breakfast Basket to start, but the weekend’s snowstorm had prevented the typical delivery of croissants and baguettes. We mourned the loss of carbs.

Instead, we got the granola to start. It was stunning for my camera and covered in crunchy goodness and berries. With that refreshment, I attempted to feel proud of my pseudo-healthiness. No Bloody Marys and yogurt to start? Go me. 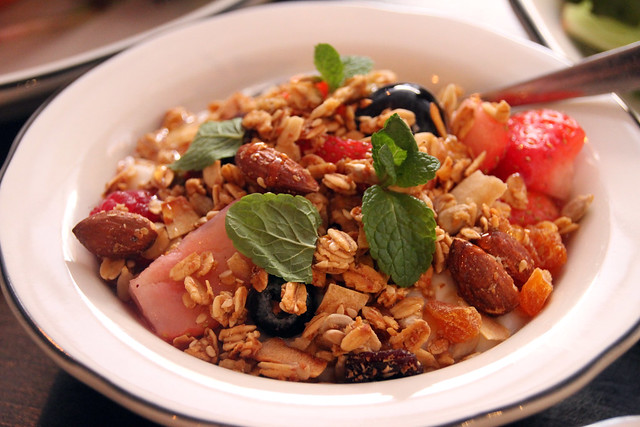 Then, in an act of healthful defiance, I ordered the poutine—the hangover poutine, Montreal style. But it wasn’t just fries with cheese curds and gravy, this beauty had a home-made hamburger patty, green peppercorn gravy, and a runny fried egg on top.

It was unbelievable, probably the most unhealthy and glorious thing I’ve had in the East Village. And my East Village experience has been pretty unhealthy (who can resist Ray’s Candy Store when you’re waddling home in the middle of the night?). 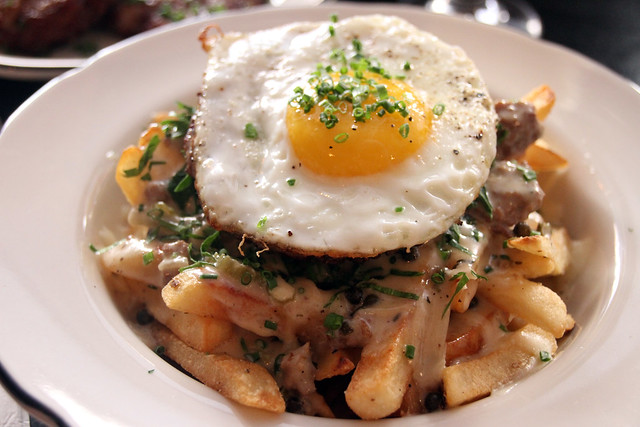 Sarah ordered the Norwegian Benedict. The home fries were quite possibly the best part of the dish; however, the Benny was delicious as well. It was served on a lightly toasted and buttered English muffin. The smoked salmon was heaped on the muffins, with plenty to spare. And David wasn’t skimping with the lemon-paprika Hollandaise. Solid.

Speaking of David, mid-meal we were graced with the chef’s presence. He popped over to say hello, and regale us with stories of his sausage-making pastimes. He was so lovely; we very much enjoyed his company. It was obvious he has put his heart and soul into the fabric of this cafe. 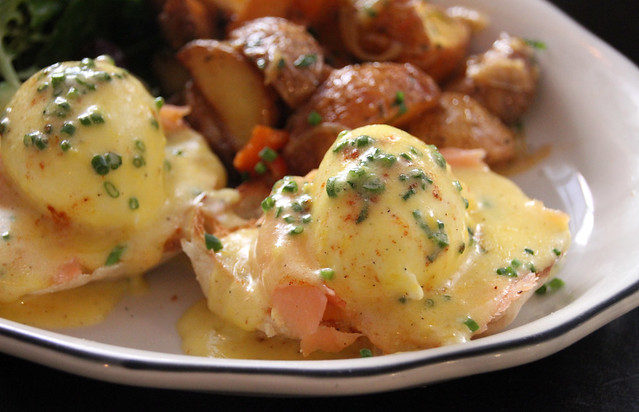 Also, David is a man after my heart. He loves brunch so much he decided to serve it four days a week, Thursday through Sunday. I wholeheartedly approve. He also, adorably, has a few menu items from his beloved, including “My Wife’s Salmon Kale Salad.” The cutest.

Allison ordered the crab cakes. Err, this was singular—only one crab cake arrived. That being said, she was pleased with the extra filling, it was a good amount of crab and had great seasoning. The dish typically comes with eggs, but she opted to go without. 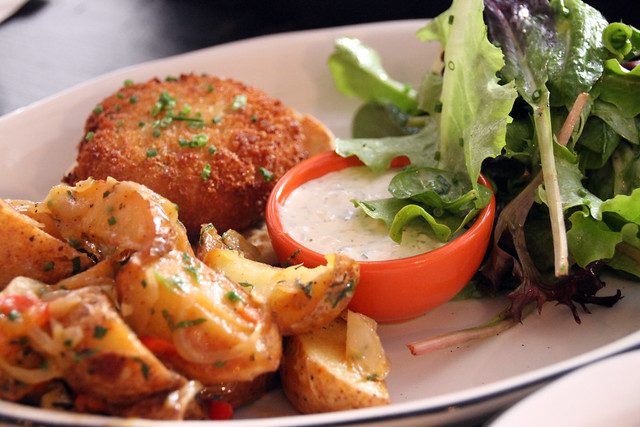 The portions were perfect for brunch. And while that poutine was the star of the show, the homemade sausage patties where so good, we ordered an extra dish on the side. It was a nice surprise for Saint Marks.

The Bitches say: A-. A gem in the heart of Saint Marks. They just need to expand the cocktail list with the acquisition of a liquor license. Please.