Ah, rainy Sundays in the city. When it’s gross and muggy, and all you want to do is stay in bed and watch the rain from the window. But sometimes on days like this, we must risk our wardrobe and accept that the humidty will ruin our hair, and head outside for brunch! 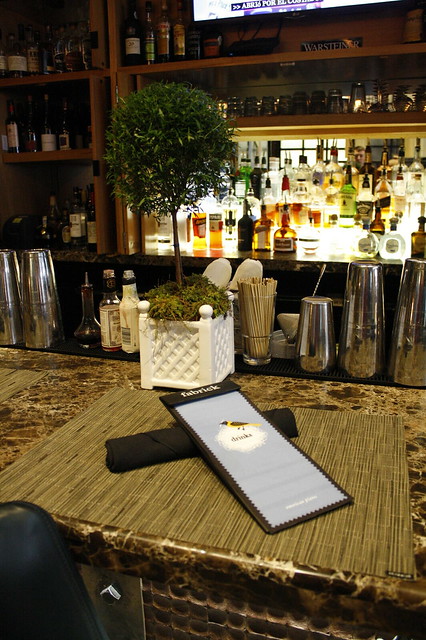 I had committed to a brunch date at David Burke fabrick, a restaurant tucked away on the first floor of the boutique hotel Archer New York, as they had recently invited us in to try their menu. I have to admit, I wasn’t particularly enthused, as some restaurants in hotels don’t make for the best brunch spots. However, we’ve been pleasantly surprised by hotel brunches before–like at Measure Lounge–so I went in with an open mind and an empty stomach. 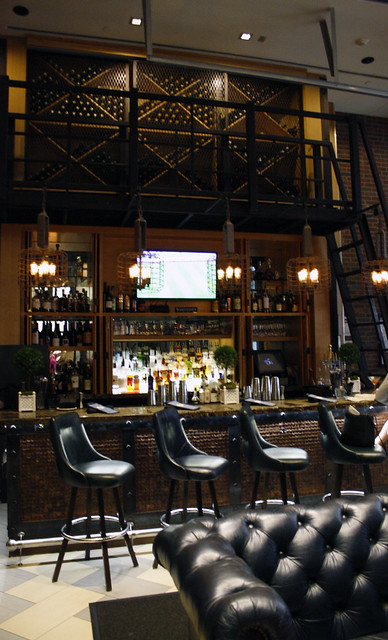 Upon entering the hotel, we were immediately enthralled by the lobby. While industrial and modern, it still had a cozy and whimsical feel. The only downside was that it was a bit confusing to differentiate between the hotel and the restaurant, and I was a bit worried I would accidentally check in for our brunch reservation at the hotel front desk. 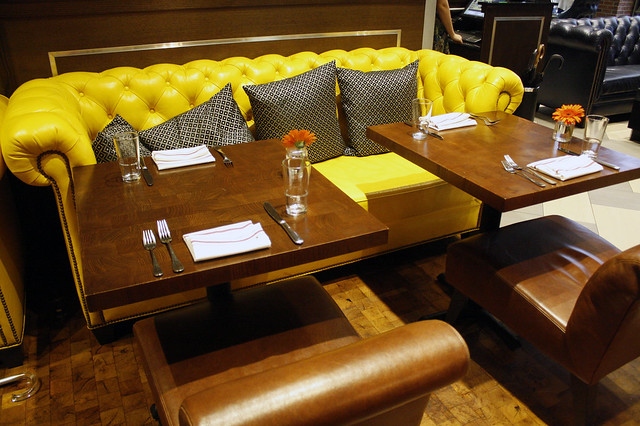 Luckily, I chose the right check-in spot and we were escorted to our table. Fabrick has various seating arrangements; some with plush, vibrant yellow couches, others with built-in booths, and regular tables accented by bright apple red chairs placed beneath a giant skylight. I also noticed a larger, long table that would be perfect for a larger brunch group. 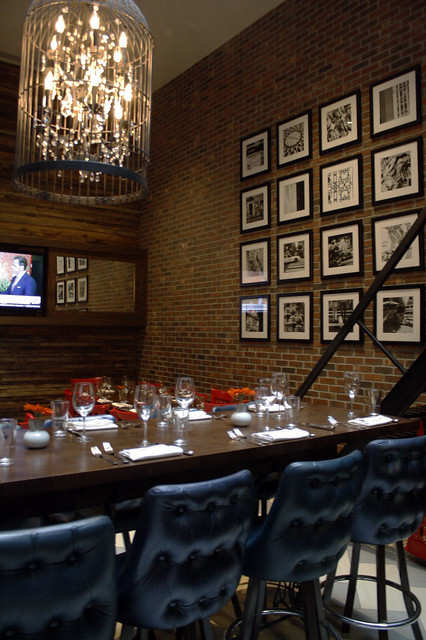 I loved the airiness of the dining room, as well as the fact that you could see directly into the open kitchen. Being able to sneak a peek at all of the dishes being prepared really helped us in making our dining decisions. 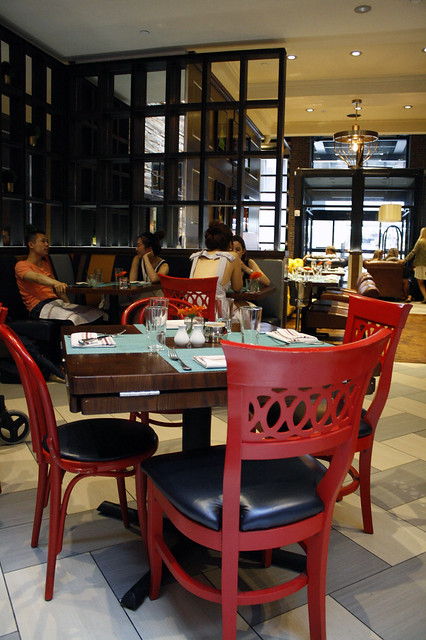 First thing was first: We had gotten a bit rained on during our walk down to brunch and needed a cocktail to warm up. Per usual, I decided to start with a Bloody. Fields surprisingly went the sweeter route and ordered a Bellini. 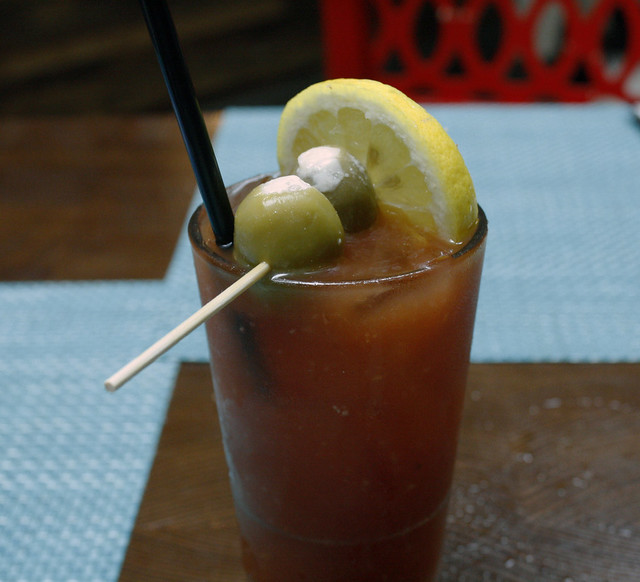 I ordered a Dirty Mary, which was made up of Ketel One vodka, house-made Bloody Mary Mix, olive brine, and bleu cheese olives. This Bloody was fantastic, and I loved the addition of the olive brine and bleu cheese stuffed olives. The saltiness complimented the heat of the mix quite well, without being overbearing. 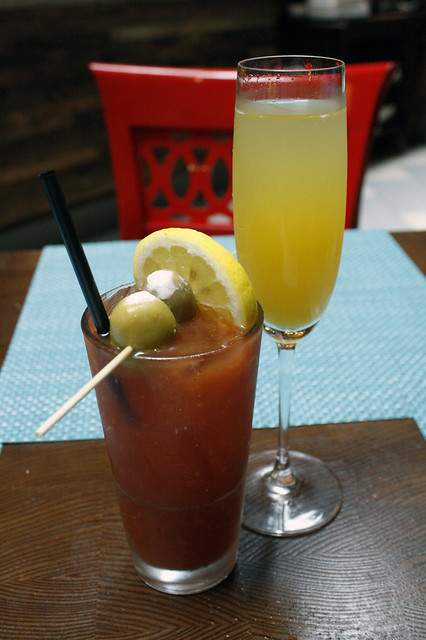 Fields’ Bellini was your typical cocktail–Prosecco mixed with peach purée. The bartender served the drink with a nice balance of booze to purée, so it wasn’t too tart or too sweet.

Fabrick’s brunch menu is very playful, with dishes ranging from classics like omelettes and pancakes, to unique dishes like lobster BLT steamed buns and “Can O’ Tuna” poke. I appreciated this approach, as it made what could have easily been your average hotel brunch a fresh and fun experience. 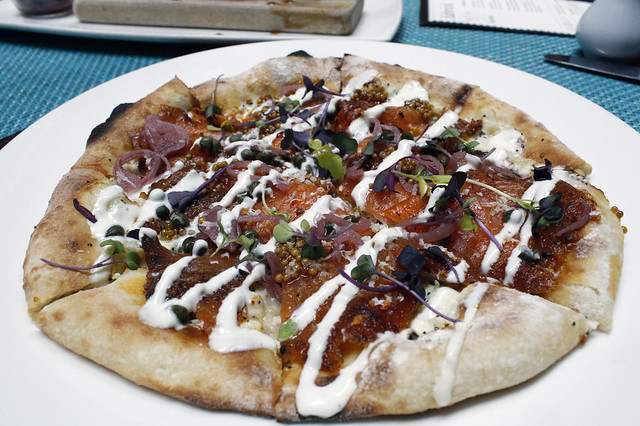 We decided to share a few apps to start. First was the smoked pastrami salmon flatbread, with fresh horseradish, shallots, and capers, all on an everything bagel crust. There was also a topping that looked and tasted very similar to mustard seeds.

As a New Yorker, dare I say this was almost as good as your traditional bagel and lox?! The crust seriously tasted like a bagel and the pastrami salmon was smoked and seasoned to perfection. The only downside was my mouth felt like a salt lick after a few slices, but this was to be expected with this mixture of ingredients. 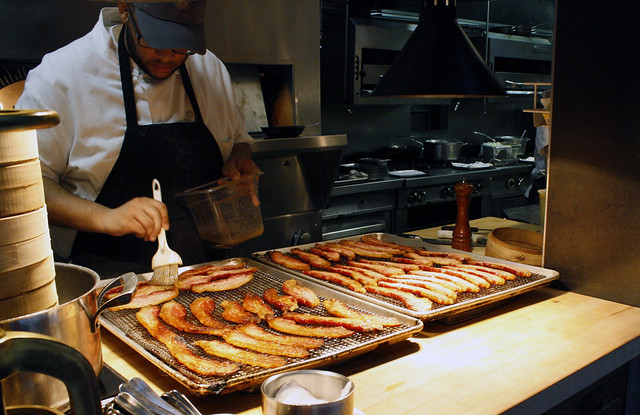 Like I mentioned, we could see the open kitchen from our seats. We kept seeing the chef fire order after order of a dish that we could only assume was the Clothesline Bacon, as it was literally bacon hanging from a clothesline. After we spotted it being prepared for probably the 5th time, we knew we had to try it.

The bacon was extra thick-cut, candied, and then brushed with a black pepper maple glaze. Served hanging on a clothesline with an extra clothespin so you could place it on your plate to avoid getting sticky fingers from the glaze, we both agreed this was a really inventive concept. 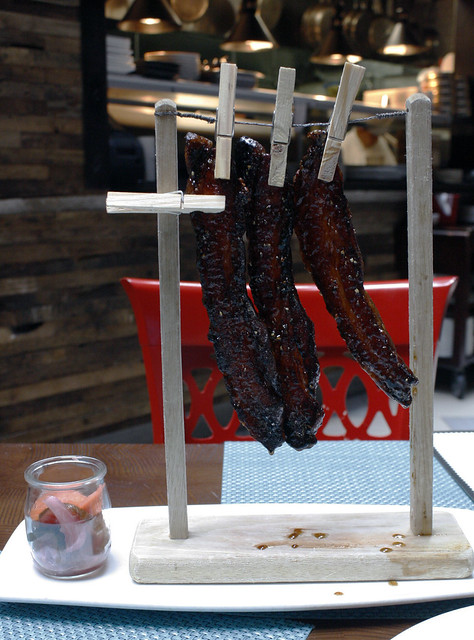 The dish was almost too peppery and salty at first, but eventually the maple from the glaze shined through and provided a much-needed hint of sweetness. We would definitely recommend ordering this dish, partly for the bacon but mostly for the presentation.

For our entrées, I went with a run-of-the-mill brunch dish: the Classic Eggs Benedict. Ham and garlicky spinach were served beneath a poached egg topped with hollandaise, along with a side of home fries. 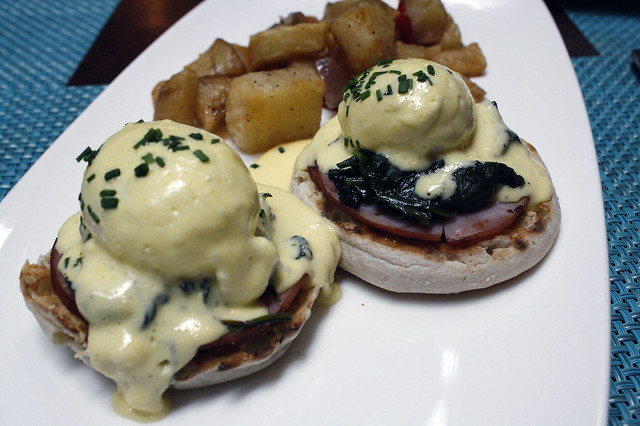 Honestly, the plate looked a bit sad, presentation-wise. I could tell from just looking at the home fries that I would be less than impressed with them. While the benny was alright, it wasn’t amazing, and the garlicky spinach didn’t pack the extra “oomph” that I was hoping it would. My initial impression of the home fries were correct, and I left them mostly untouched.

Fields went with the open-faced fried chicken, served on top of a a jalapeño-cheddar biscuit with tomato jam and Mike’s Hot Honey (which we’re both now obsessed with, by the way), plus a side salad. Not the biggest fan of tomatoes, he went with the jam on the side, just to be safe. 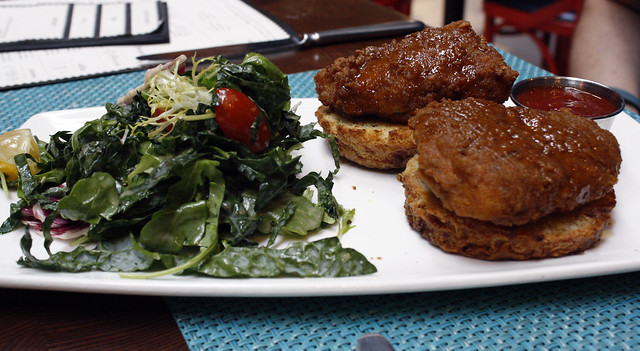 This dish was delicious and we both appreciated that it was served open-faced; even though the chicken was lightly fried, it probably would have been too heavy had it been served as a biscuit sandwich. The jalapeño-cheddar biscuit was bursting with flavor and we both now have our eyes peeled for where we can buy Mike’s Hot Honey. It was spicy, yet sweet, and we want to put it on everything we ever eat from now on. Fields commented that the chicken was cooked perfectly. 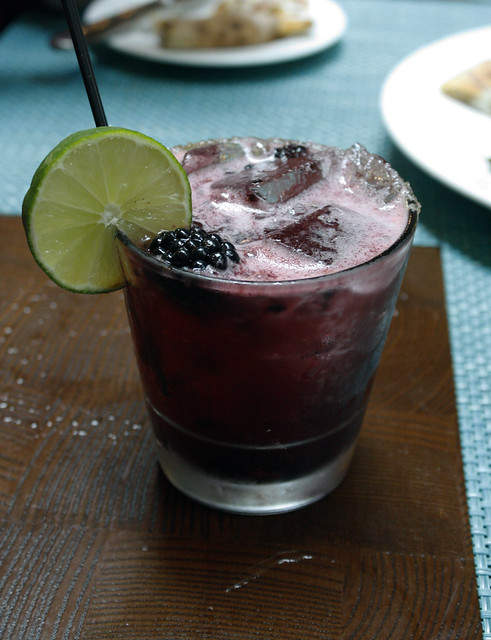 Our amazing server insisted we each try a craft cocktail and share a dessert item. Always a sucker for cocktails with muddled, fresh fruit, I went with the Blackberry Lime Rickey. This bevvie consisted of Hangar One vodka, muddled blackberries, agave, lime, and prosecco. It was incredibly refreshing and tart; the perfect summer cocktail. 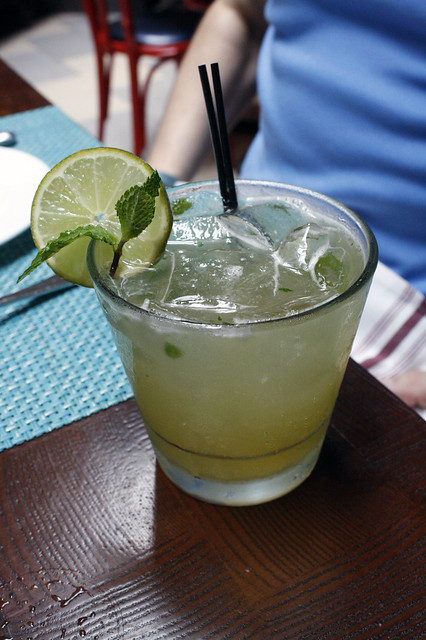 A bit of a whiskey connoisseur, Fields decided to try the Rabbit Hunter. Whistle Pig rye was mixed with ginger beer, fresh mint, and lime. This cocktail was reminiscent of a Moscow Mule, although it had a bit more of a bite to it on account of the whiskey.

We ended our meal with the Frozen S’mores Napoleon. Layers of  graham cracker cake and chocolate semifreddo are topped with coffee marshmallows and chocolate-covered cherries. I’m a big fan of table side presentations, so I was delighted when our server hand poured caramel sauce over the dessert. 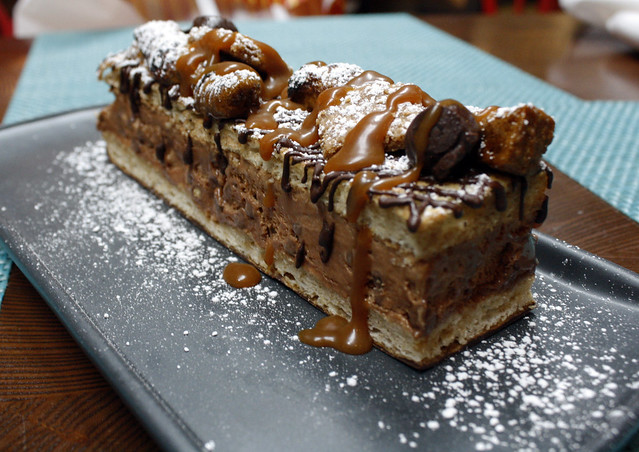 This was yet another inventive dish–it was like a s’more on steroids. The graham cracker cake provided a nice crunch, while the chocolate semifreddo was rich and decadent. The fact that it was served semi-frozen gave it a nice consistency. Once we finished, we moseyed our way out of the restaurant, and back into the summer rain.

The Bitches Say: B+. David Burke fabrick delivers a delicious and inventive brunch with a well-rounded menu in an industrial, yet cozy setting. A couple small tweaks could make this one of the best hotel brunches in town.

David Burke fabrick serves brunch on Saturdays and Sundays from 10:30am until 3:30pm.